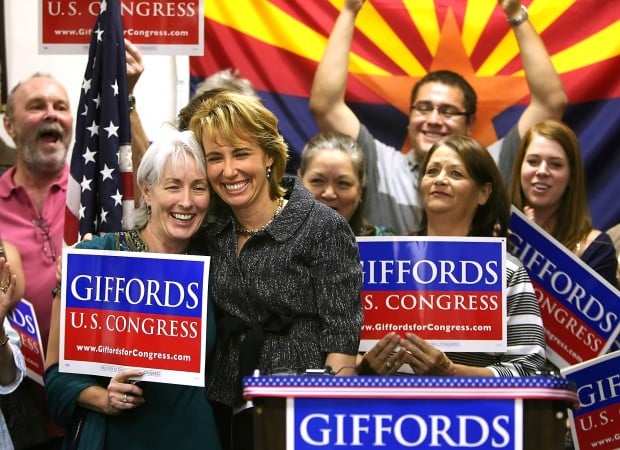 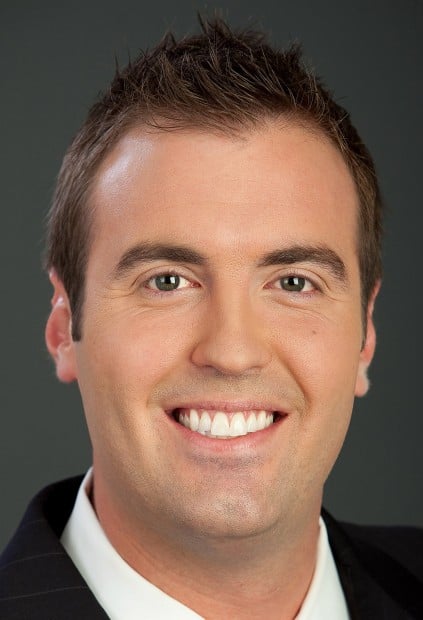 thanks wife and family. 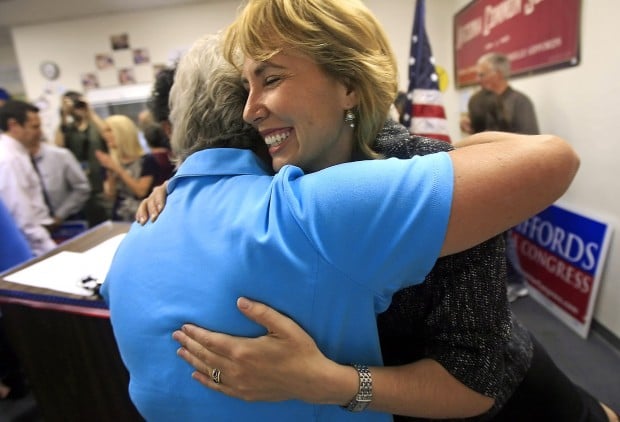 Giffords hugs yet another supporter during celebrations Friday at her headquarters in Tucson, where she declared her victory with a 3,800-vote lead.
Rhonda Bodfield and Andrea Kelly Arizona Daily Star-

After the Pima County elections office released the results of some 14,000 early ballots, Giffords expanded her earlier 3,000-vote lead to more than 3,800 votes. In all, she held 48.7 percent of the vote to Kelly's 47.2 percent.

Surrounded by about 50 enthusiastic supporters at her campaign office, a visibly relieved and excited Giffords declared victory about 90 minutes after the results were posted.

While complimenting Kelly's supporters on their passion and patriotism, Giffords thanked her own volunteers, and attributed her success to Democrats, Republicans and independents' pulling together. She said that's going to be increasingly important with the immense challenges continuing to face the district and the country.

"I'm not elated to be in the minority," she said in a reference to Republicans' taking control of the House, "but my job isn't to be in the majority. It's to do the work and I'm looking forward to doing that starting next week."

She pledged to continue to work on securing the border, strengthening Social Security and public education, and helping Arizona tap into emerging jobs in new technologies.

Kelly could not be reached for comment but released a statement. "I would like to thank our Lord and Savior Jesus Christ, my wife Aubrey, who has been by my side this entire time, my family, for their unwavering support, and the thousands of warriors who fought with me in this campaign," he said.

"While we fell short here in District 8, Tuesday was a resounding victory for America," he said, adding he is proud of the campaign he waged. "We are blessed by God to live in a nation where we get the government we deserve and the government that we chose. The voters of Southern Arizona have spoken and I respect their decision."

Giffords throughout the campaign attacked Kelly's ideologies - such as his call for privatizing Social Security and a flat federal income tax - as out of step with Arizona, while the tea party-backed Kelly targeted her for votes on the federal health-care overhaul, stimulus and cap and trade.

Narrow though they were, the Giffords victory, combined with that of her Southern Arizona seatmate, Raúl Grijalva, were a silver lining for Democrats, given the losses of Democrats Ann Kirkpatrick of Flagstaff and Harry Mitchell in Tempe. Democrats will now hold three of the state's eight congressional seats.

There will be no more ballots counted until Monday, said Elections Director Brad Nelson.

Nelson estimated there are roughly 3,000 early ballots left to count, along with potentially 13,000 provisional ballots, which are those that need verification of identification or registration. With provisionals trickling in from the Recorder's Office to the Elections Department over the weekend - about 600 were sent over Friday night - Nelson said he'll wait to run a larger batch.

In the other closely-watched local race, District 26 Republican Rep. Vic Williams continued to retain his lead over Democratic Rep. Nancy Young Wright in the battle for the second state House seat. More than 800 votes separate the two candidates, with Williams collecting 32.9 percent of the vote and Young Wright garnering 32.1 percent. The top vote-getter was newcomer Terri Proud, a Republican.

In the statewide races, three initiatives remain up in the air.

Proposition 110, which would set conditions for the exchange of state trust lands, was barely losing, with 50 percent of the vote to the "yes" side's 49.9 percent.

Prop. 112, which would make changes to the initiative process, was winning with 50 percent of the vote, while 49.9 percent were opposed.

Prop. 203, which would allow medical marijuana, was narrowly being defeated, with 50.1 percent of the vote to 49.8 percent.

Grijalva, the co-chair of the congressional progressive caucus who just came off a close win in his Southern Arizona district, released a statement Friday lauding Pelosi's past efforts as speaker and saying he stands "wholeheartedly behind her."

"During her tenure, the House of Representatives passed landmark legislation that did not always receive adequate support in the Senate," Grijalva said. "Her leadership has been effective and productive for the Democratic Party and the American people, and she has been unfairly criticized for policy outcomes beyond her control."

Pelosi, who won 80 percent of the vote in her San Francisco district, told her Democratic colleagues that she will fight to keep Republicans from rolling back Democratic measures passed by the last Congress.

Preliminary results from the Secretary of State for Arizona's Senate and House seats. Results are updated every 15 minutes; if you are seeing …

Preliminary results from the Secretary of State for the statewide proposition votes. Results are updated every 15 minutes; if you are seeing o…

Preliminary results from the Secretary of State for Arizona statewide offices. Results are updated every 15 minutes; if you are seeing older r…

Preliminary results from the Secretary of State for seats in Arizona's Legislature. Results are updated every 15 minutes; if you are seeing ol…

thanks wife and family.

Giffords hugs yet another supporter during celebrations Friday at her headquarters in Tucson, where she declared her victory with a 3,800-vote lead.
© Copyright 2021 Arizona Daily Star, PO Box 26887 Tucson, AZ | Terms of Use | Privacy Policy
Powered by BLOX Content Management System from TownNews.com.
You don't have any notifications.