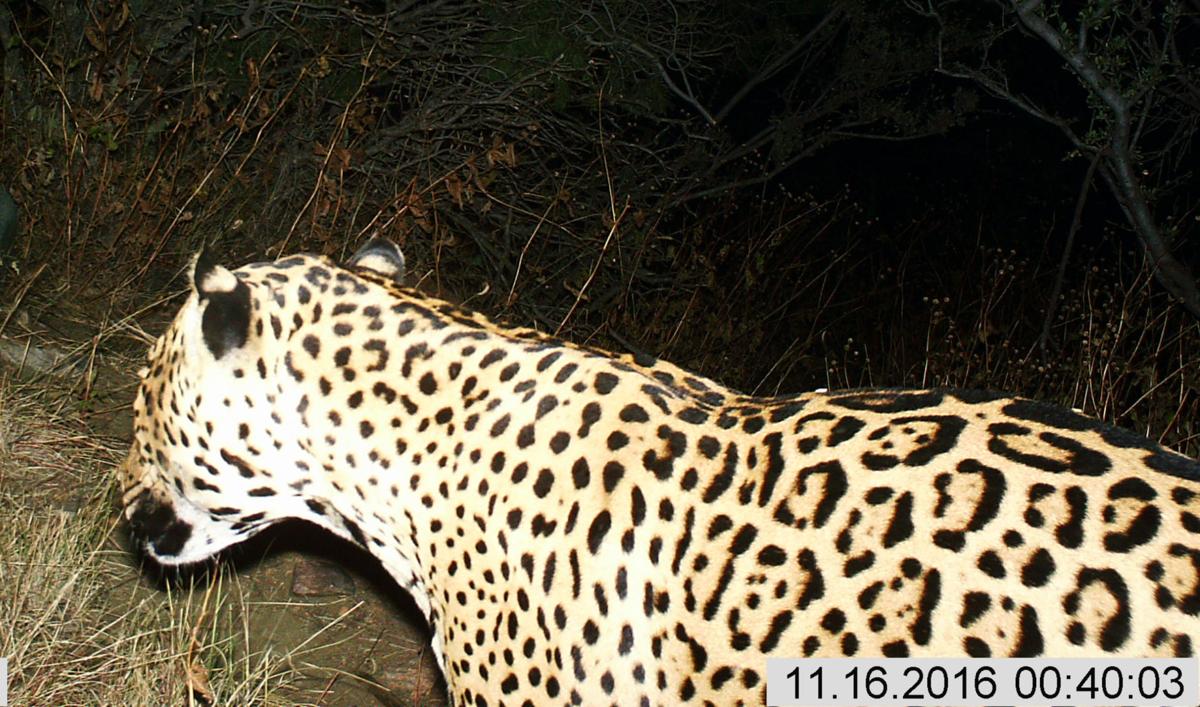 Cameras in the Dos Cabezas Mountains photographed this jaguar in November. Interior chief Ryan Zinke is committed to the president’s border wall, which would impede the jaguars’ movement. 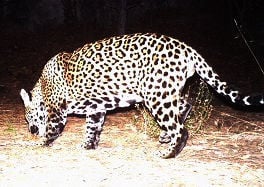 This photo of a Southern Arizona newcomer was taken Dec. 1. Jaguars once lived as far north as the Grand Canyon.

While one branch of the U.S. government reviews a plan to bring back the endangered jaguar, another branch wants to waive legal protections for the species to build the border wall.

This week, new Interior Secretary Ryan Zinke told a ranching advocacy group that U.S. Homeland Security Secretary John Kelly “will put forward a waiver on the border, which will allow me much more flexibility” in managing the jaguar there, according to E&E News, an environmental news service.

Zinke’s talk to the Public Lands Council in Washington, D.C., didn’t elaborate on how that would happen.

“Secretary Zinke is committed to carrying out the president’s vision for an immigration system that is lawful and includes border security,” Interior spokeswoman Heather Swift wrote in an email.

Swift referred a reporter to Kelly for details on Homeland Security’s position. Homeland Security spokeswoman Jenny Burke emailed the Star on Thursday to say “I’ll look into this for you," but otherwise didn’t respond to a request for comment.

Zinke’s comment Tuesday came eight days after the Fish and Wildlife Service took final public comments on a detailed jaguar recovery plan. The 508-page document proposes a complex blueprint of measures costing about $56 million over five years and $605 million over 50 years to help the jaguar recover from what many believe is a precarious state.

The plan lacks the force of law but does propose measures to strengthen legal protections and numerous programs to improve jaguar habitat, expand monitoring and improve research of the species. The wildlife service has received well over 200 emailed comments and a handful of written letters. It should decide on a final plan in about a year.

Steve Spangle, the wildlife service’s top Arizona official, said it’s a “fair question” to ask if federal agencies are behaving in a classic manner in which the right hand doesn’t know what the left hand is doing.

“The answer is quite simple,” Spangle said. “A recovery plan (consists of) recommendations to recover a species. If agencies or individuals choose not to follow it, that’s perfectly their right.

“Our recovery plan lays out what we believe is necessary to conserve the jaguar. What happens in the land management world may not be consistent with the recovery plan.”

If President Trump “wants to invoke any more waivers, he should know that he will see us in court,” said Dan Millis, borderlands program coordinator for the Sierra Club’s Grand Canyon chapter. “That waiver authority is unconstitutional and we will challenge it.”

Under the 2005 federal Real ID Act, the government has the right to formally waive restrictions under the Endangered Species Act and other environmental laws in pursuit of building border fencing. Homeland Security used that law to help it build about 650 miles of border fencing and walls during the 2000s.

While the U.S. Supreme Court declined to hear court challenges to the act in the 2000s, “now that the border wall is front and center in the news, and it’s Trump’s pet project and Trump is under the microscope, I think the Supreme Court will be more motivated to look at the case,” Millis said. “It’s very unfair that the borderlands resources and communities are unable to count on the same protections that the rest of Americans take for granted.”

The jaguar does have legal protection in the U.S. in the form of the wildlife service’s formal designation of much of the Arizona-New Mexico border with the Mexican states of Sonora and Chihuahua as critical habitat for the large mammal.

The jaguar is known to live in 19 countries including the U.S., but it is considered vulnerable to a wide range of threats including habitat destruction and illegal killing.

The Endangered Species Act forbids destruction or “adverse modification” of critical habitat. That typically is taken to mean damaging the land severely enough to destroy its usefulness to the endangered species.

A continuous border wall — of the kind Trump has favored building but not yet formally proposed — would slice directly through five of six formal units of critical habitat that the wildlife service designated for the jaguar in 2014. The sixth unit connects directly to another unit next to the border. In all, about 764,000 acres of critical jaguar habitat exist in Arizona and New Mexico.

Improving and maintaining “connectivity” of jaguar habitats in Arizona with those in northern Mexico were key factors used to choose lands for critical habitat and to draw up key provisions for the recovery plan, wildlife officials said.

Typically, if a federal project is believed likely to negatively affect an endangered or threatened species, the agency proposing it must consult with the wildlife service to detail impacts and to compensate for them.

But if Homeland Security chooses to invoke the Real ID Act and ask for a waiver, “we would not even consult on the wall,” Spangle said. That’s what happened a decade ago when then-Homeland Security Secretary Michael Chertoff invoked the law.

The proposed jaguar recovery plan talks explicitly about the existing border fencing’s impacts on the big cats. The fencing stretching through jaguar habitat from the Tohono O’Odham Nation to southwest New Mexico contains a mix of pedestrian fencing that is too big and continuous for jaguars to pass through, and vehicle barriers that have openings large enough to accommodate wildlife.

“Fences designed to prevent the passage of humans across the border also prevent passage of jaguars. Because jaguars in Arizona and New Mexico are believed to be part of a population centered in northern Mexico, impeding jaguar movement from Mexico to the U.S. would likely adversely affect the presence and persistence of jaguars in the U.S.,” the recovery plan said.

Obviously, any walls that humans can’t get past will inhibit jaguars’ ability to go from one habitat to another, Spangle said, “but until you see the design and location on any plans for a wall, we can’t really say.”

But the species controversy about the wall is not just about jaguars crossing the border into the U.S. They need to be able to roam back and forth across the border to thrive, said Randy Serraglio, a conservation advocate for the Tucson-based Center for Biological Diversity, which like the Sierra Club opposes a border wall.

No way, federal officials say, because the cats' real hope for recovery lies in Mexico.

Tucson weather: Cooler temperatures to close out the month

Temperatures should return to seasonably normal by Sunday.

Windy conditions have stirred up high amounts of particulate matter.

I-10 near Arizona-New Mexico line reopens after dust settles

Reopens after more than two hours.

PHOENIX  — Construction of the new security system in the Arizona House of Representatives has cost significantly more than expected.

After receiving three reports of rabid animals in just over a week, the Arizona Game and Fish Department is warning the public to be careful o…

Arizona's Department of Environmental Quality sided with the companies.

Wildlife sanctuary on northwest side rebuilding after 'devastating' fire

The Tohono O'odham and two other tribes challenge the Forest Service's position that it legally can't say "no" to the open-pit mine.

Some research suggests jaguars are declining in Sonora amid killings, habitat loss

The tiny number of jaguars seen in the U.S. — seven males since 1996 — needs a healthy northern-Mexican population to thrive.

Cameras in the Dos Cabezas Mountains photographed this jaguar in November. Interior chief Ryan Zinke is committed to the president’s border wall, which would impede the jaguars’ movement.

This photo of a Southern Arizona newcomer was taken Dec. 1. Jaguars once lived as far north as the Grand Canyon.