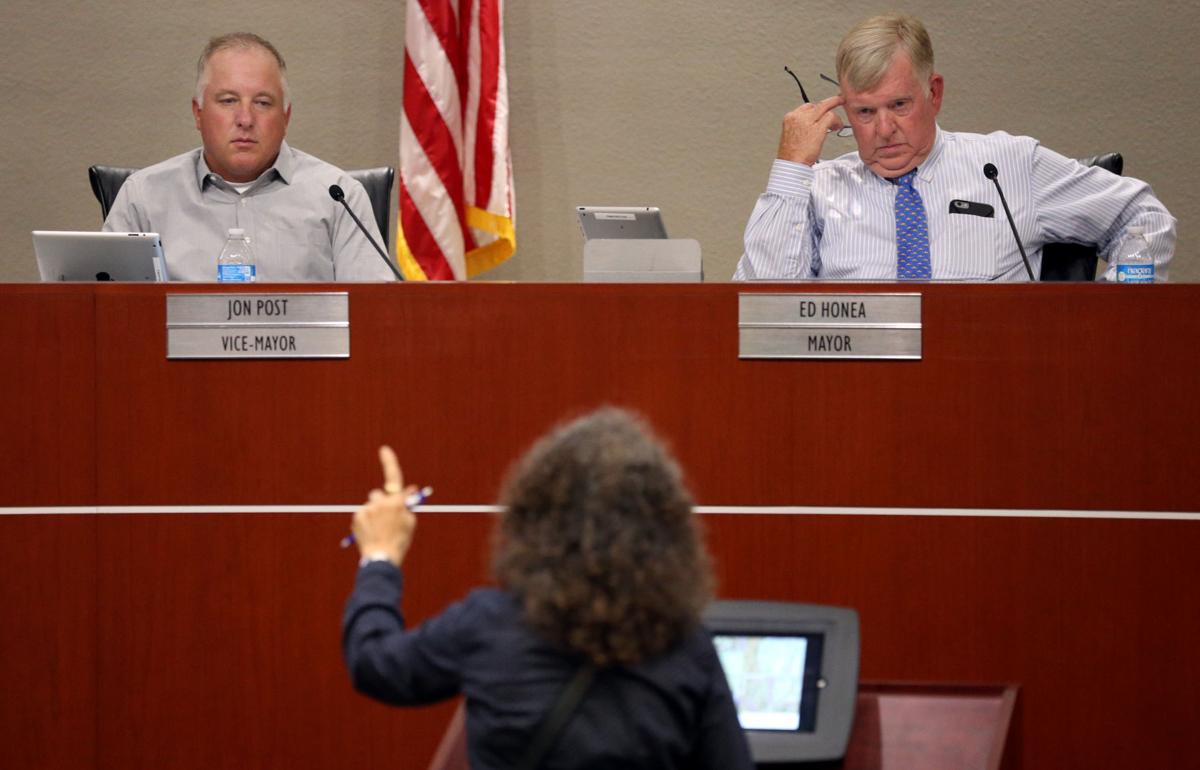 Marana Vice Mayor Jon Post and Mayor Ed Honea listen to a speaker prior to voting in favor of the Lazy K Bar Ranch rezoning. 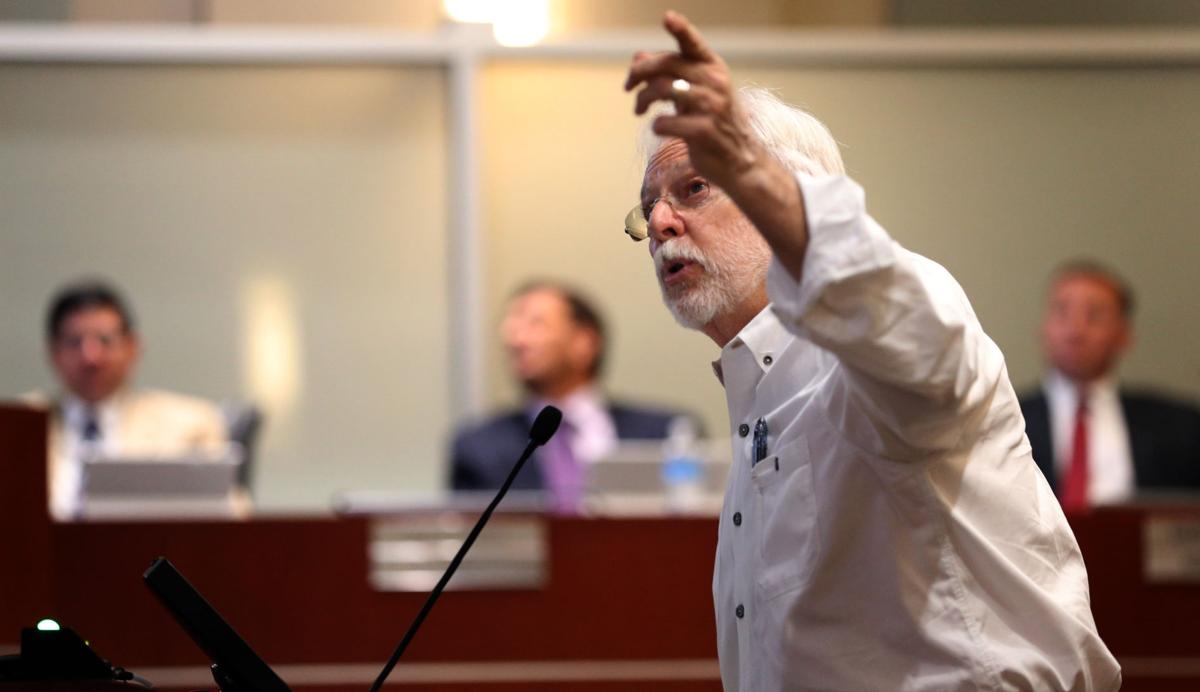 Hardy Smith gestures towards a map of the proposed development as he asks the Marana Town Council to vote against the Lazy K Bar Ranch Specific Plan, Tuesday, May 16, 2017, Tucson, Ariz. 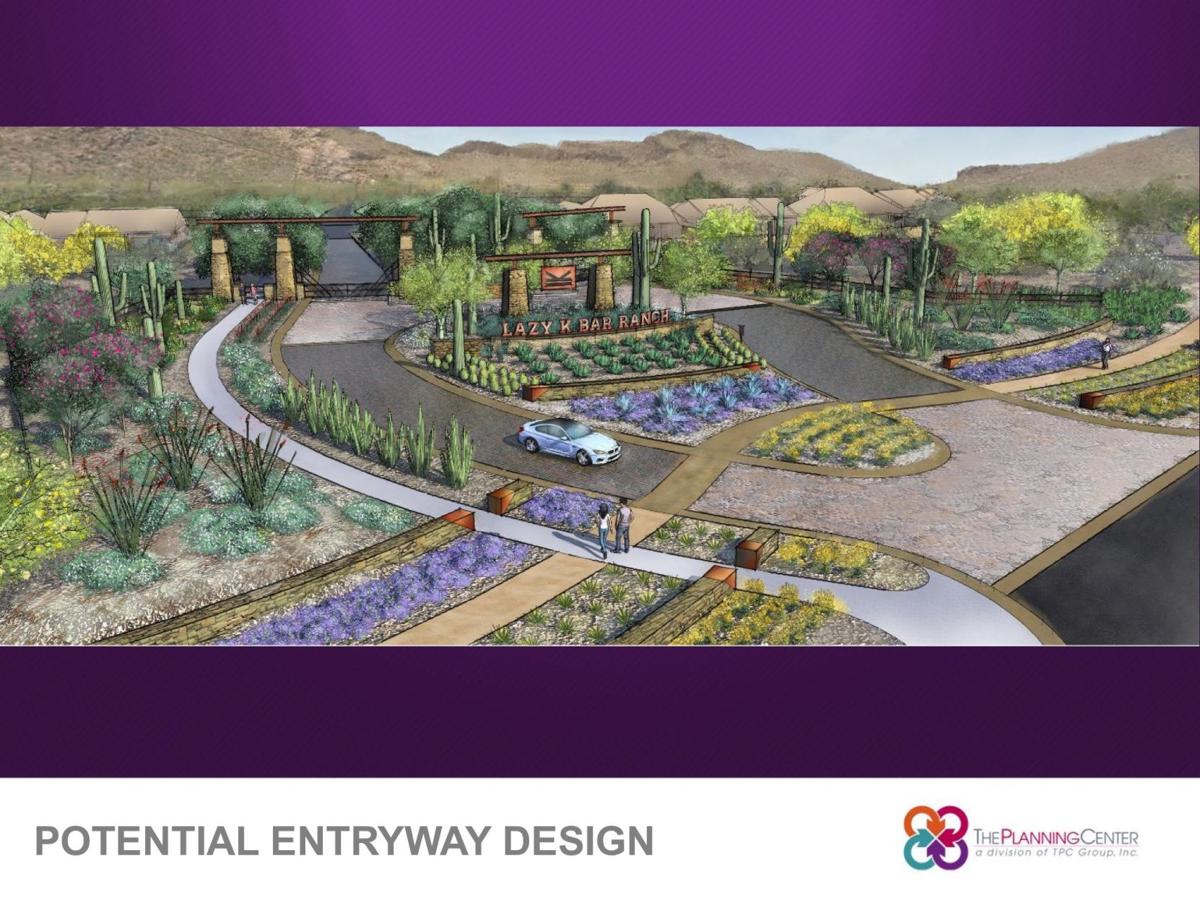 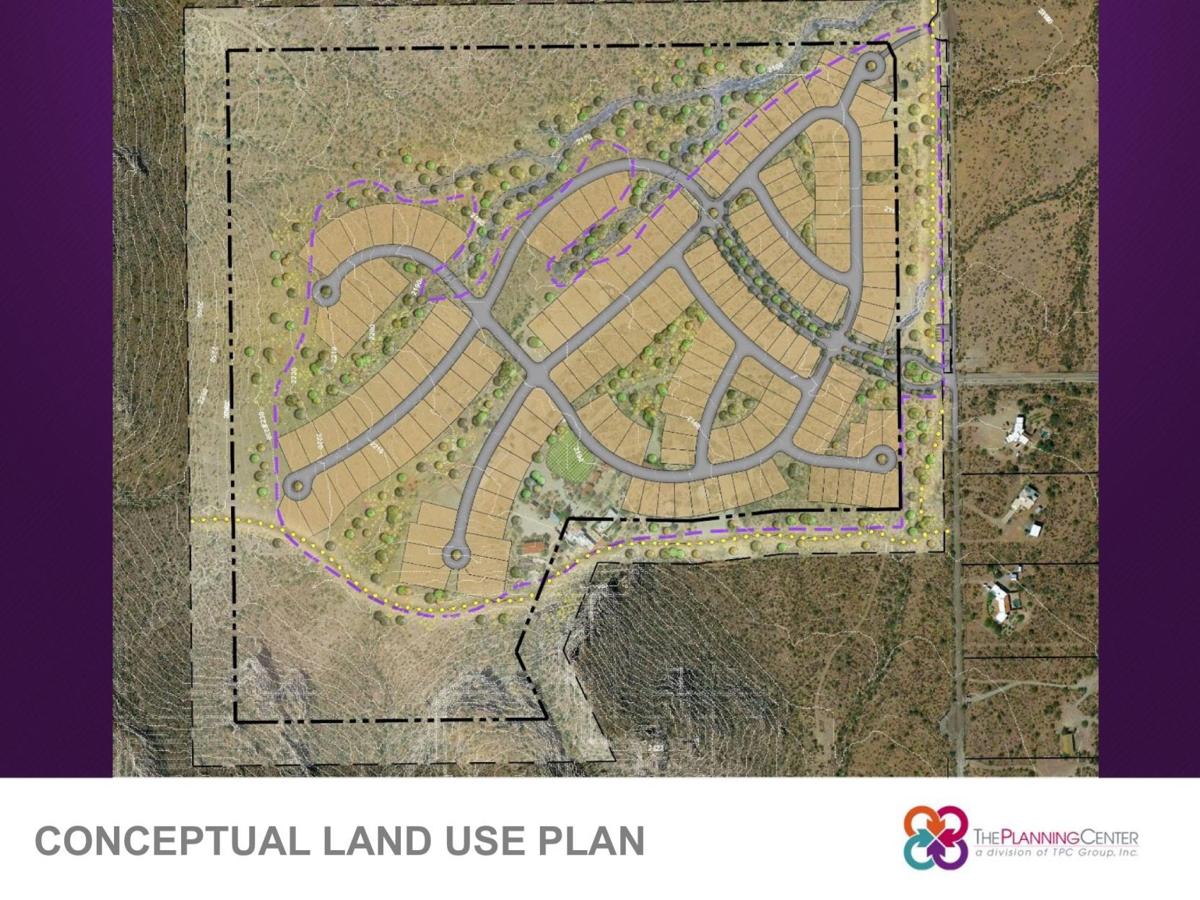 The Marana Town Council voted Tuesday night to approve a hotly contested rezoning. After years of conflict, developers now say home building could begin as soon as a year from now on the property a half-mile north of the park, west of North Silverbell Road and south of West Twin Peaks Road.

Homebuyers may be able to start moving into the development near the Tucson Mountains six to nine months after that, said Linda Morales, a consultant for the Lazy K Bar’s owners and developer.

The project drew intense opposition from many neighboring homeowners. They said the proposal is out of scale with the area’s current zoning of one home per 3.3 acres.

This historic area deserves “something truly special, something really extraordinary, something the town could really be proud of,” resident Barbara Rosson told the council Tuesday night.

Neighbors generally wanted a cultural and/or historic center at the property, to honor Marana’s farming and ranching heritage — something besides “another densely packed subdivision,” Rosson said.

A development supporter, Bill Baffer, testified that his main interest is to bring people to the Tucson region, so “my children and your grandson can come live here and have a place to work. We suffer from a lack of industry. Marana is in the forefront of growth in this region, and I congratulate you for what you’ve done.”

Opponents made up the overwhelming majority of about 50 speakers Tuesday. The council chamber was packed with well over 100 people.

But developers won the day because they had carved a 150-foot-wide strip of open land out of their earlier rezoning proposals. That created a buffer that eliminated the previous “supermajority” requirement for six of the seven council members to approve the rezoning. That supermajority requirement, created because so many neighbors opposed the rezoning, killed the proposal the last two times. This time, four votes were needed.

“I’d like to live on 3.3 acres, but it is unwieldy.... Sometimes, 3.3 acres isn’t what’s needed,” Ziegler said before voting. “I think they’ve been very respectful with land use here.”

Comerford, who wasn’t at the meeting but spoke via telephone, said, “It makes me sick to my stomach to see what we’re doing here. I’m a firm believer in property owners’ rights, but this is just wrong. ... There’s so many other areas where we can do higher density and this is just not one of them.”

Environmentalists managed to protect a hefty chunk of the site’s desert. The Coalition for Sonoran Desert Protection and Pat Lopez, an attorney representing several neighbors, reached an 11th hour agreement with the landowners just before Tuesday’s meeting to put a covenant in the land’s deeds requiring permanent protection of a major wildlife corridor.

The corridor through the project site helps connect the Tucson Mountains with the Tortolita Mountains. About 60 percent of the Lazy K Bar site is now permanent open space due to the covenant that was opposed by town staff but supported 5-1 by the council. Because of that, the Coalition for Sonoran Desert Protection supported the rezoning.

“If they sign onto a project, it gives you pretty good cover with the environmental community,” Honea said of the coalition. “It does show there were people on both sides of the issue that came to the table.”

The primary concern was to protect the area’s “critical regional wildlife linkage,” the coalition’s Christina McVie said Wednesday in explaining the group’s support for the project in return for the open space. “This is an improvement over the past projects, but I’d have preferred less density and greater protection for the washes.”

Morales, CEO of The Planning Center, cited the open-space covenant to rebut criticisms of the effort to avoid a supermajority requirement. The areas to be developed are mostly devoid of desert vegetation due to past ranching activities, she said.

“We’re preserving large wildlife corridors around the site. It’s going to be a conservation-oriented development. There was a lot of talk about it being high density, but at 1.29 homes per acre it was very low density,” said Morales. “All the lots will back into open space and there will be a lot of connectivity between the development and the natural open space.”

The set-aside didn’t stop the National Park Service from opposing the project. While The Planning Center and landowners approved measures requiring native plants for home landscaping and lighting sensitive to dark skies, they can’t offset all the impacts of such a large project, wrote Saguaro Park’s Scott Stoneham in a letter to the town.

“Our fear is, as new developments continue along the boundary of the park, that the resources and values the park was established to protect will become irreparably compromised,” Stoneham wrote Tuesday. “The impacts are direct and indirect and they are cumulative.”

The real question is why are we doing this, asked resident Charles Kelly, who opposed the rezoning. “If you really cut through all the clutter here, it’s about money for owners to sell the property. It’s Marana adding to its tax base. It’s (construction) jobs for people who come here, although the jobs will be a transient thing,” Kelly said.

Honea countered that in this and most other projects in the town, 50 to 60 percent of land stays open forever. “We’re very respectful of the environment. We realize that beauty is why people come here,” Honea said.

Morales predicts the 178 homes could be bought out in three to four years.

“We’ve had so much interest from people who want to see this development,” he said. “They want to move into a higher-end area.

“It also may be for executives, like the Caterpillar guys coming in. It’s a great housing option for them. Great access to the freeway,” she said.

Lazy K Bar Guest Ranch began as a homestead in 1928 and reached its peak as a guest ranch in the 1950s. In more recent years, business slowed, in part due to high-density development in southern Marana that made the ranch less of a remote destination. It stopped operating in 2007.

Marana votes it down 5-2, even after last-minute compromise effort.

For nearly 50 years, he gave of himself to the ranch.

Gold poppies carpet some patches of desert at Saguaro National Park west of Tucson -- and other wildflowers add to the color show. Video by Do…

Climate has been a critical resource since Arizona’s beginning. Our sunny, warm, dry weather provided the foundation for successful cattle ran…

Above average highs should return by early next week.

The fox, who bit a boy over the weekend, was not located.

Marana Vice Mayor Jon Post and Mayor Ed Honea listen to a speaker prior to voting in favor of the Lazy K Bar Ranch rezoning.

Hardy Smith gestures towards a map of the proposed development as he asks the Marana Town Council to vote against the Lazy K Bar Ranch Specific Plan, Tuesday, May 16, 2017, Tucson, Ariz.