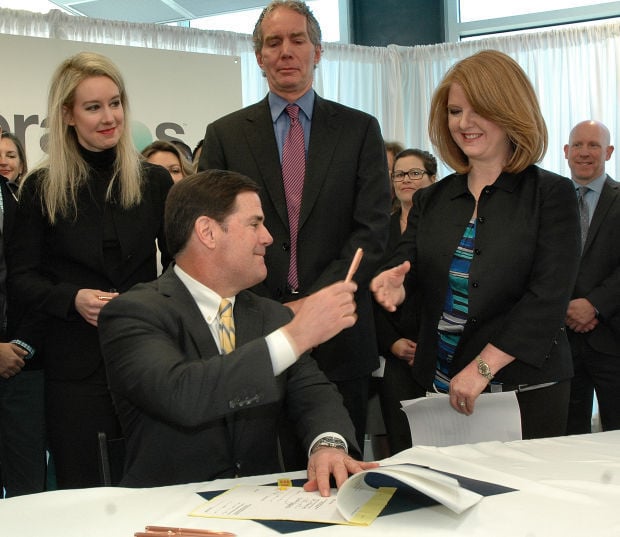 Doug Ducey gives a pen to Rep. Heather Carter Monday after signing legislation allowing Arizonans to order their own tests. 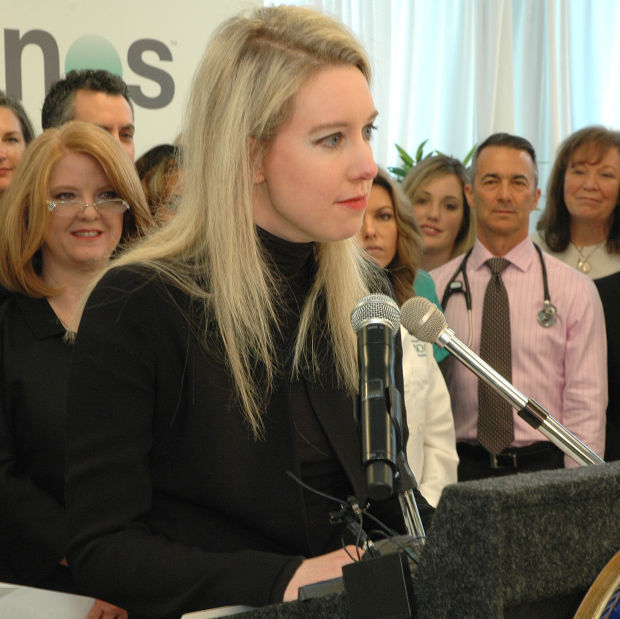 Elizabeth Holmes, CEO of the laboratory testing firm Teranos, explains why her company lobbied for legislation signed Monday by Gov. Doug Ducey which lets Arizonans order up their own tests without first getting a doctor’s orders.

PHOENIX — Arizonans who want to order their own lab tests will soon be able to do so without first visiting a doctor.

But your insurance company won’t pick up the tab.

Legislation signed Monday by Gov. Doug Ducey removes all the limits on the kinds of blood, urine and other tests patients can order for themselves. The measure takes effect July 3.

Current law already lets patients walk into a lab and find out their cholesterol, find out if their diabetes is under control and get their PSA numbers to find out if they may have prostate cancer.

But if you want to check for vitamin deficiency, you’ve first got to get an order from your doctor. Ditto for allergy tests.

And no lab now is going to do the advanced cancer screenings that have recently become available on someone who walks in off the street.

Ducey said he sees the new law as a cost-control measure. The governor said he presumes labs, now free to compete directly for patients, will both post their prices and adjust them accordingly.

That still leaves the question of whether patients are in the best position to order their own tests, or to understand the results. But Carter said she does not see a drawback. “If I have more information and something comes to my attention that I didn’t otherwise already know, now I have the opportunity to go and see my doctor and to go and hopefully before it becomes in a too-far-progressed diseased state, take control of my own health and wellness and reverse the course,” she said.

“But without that information, I just continue to live my life every day, unbeknownst to what’s happening,” she said.

Elizabeth Holmes, the chief executive officer of lab-testing firm Theranos, which stands to benefit from expanded consumer-driven testing, said she approaches the issue from a different perspective.

“It is a basic human right for people to have access about themselves, their own body, their health,” she said. And Holmes said she thinks this new law will actually lead to better health care.

Holmes said anywhere from 40 to 60 percent of people who get lab orders from their doctors do not bother to follow through.

She said that will change by putting people in control to decide what tests to have. And once they have the results, if they have questions they will then take the paperwork and go see their doctor.

Potentially more significant, Holmes said empowering people to get screened actually could result in less disease by catching it early. The alternative, she said, involves people waiting until they have symptoms or complaints.

Citing the case of her uncle, who was found to have skin cancer that eventually spread to his brain and bones, Holmes said, “For millions of people, just like my uncle, disease often begins much earlier than when the mole on the skin changes color, the foot starts to throb in pain, or when the shortness of breath makes playing with a niece or nephew too difficult.”

House Minority Leader Eric Meyer, who also is a physician, said he supports the change. He acknowledged a patient who gets the results of lab tests might not understand what a specific set of numbers means and what they indicate. But Meyer said he does not necessarily see that as a problem.

“What you’re seeing when patients come in is that they’re much more well-educated,” he said.

“And they have the ability to access the Internet,” Meyer continued, meaning they can look up what the results are supposed to mean.

But Meyer acknowledged there are pitfalls to patients walking into labs and demanding all sorts of tests.

“You could spend thousands of dollars on tests that are irrelevant,” he said.

Some people who take advantage of the self-testing that will now be allowed actually could end up spending more out of pocket than they do now.

That’s because some insurers cover lab tests when ordered by physicians. But the new law specifically prohibits labs from billing insurers for self-ordered tests.

Last year Attorney General Mark Brnovich got the company to enter into a consent decree to refund more than $4.6 million to Arizonans who got the tests.

Doug Ducey gives a pen to Rep. Heather Carter Monday after signing legislation allowing Arizonans to order their own tests.

Elizabeth Holmes, CEO of the laboratory testing firm Teranos, explains why her company lobbied for legislation signed Monday by Gov. Doug Ducey which lets Arizonans order up their own tests without first getting a doctor’s orders.