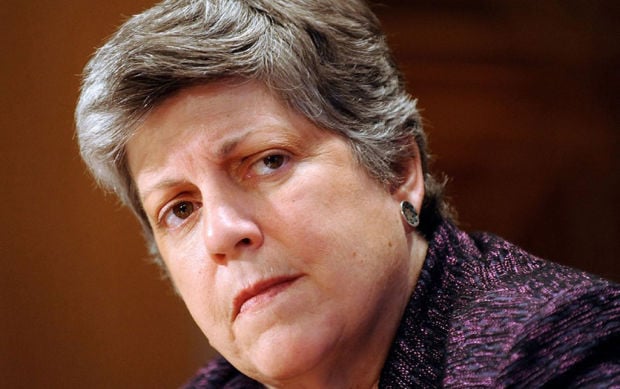 The former Arizona governor is preparing to lead the University of California system. 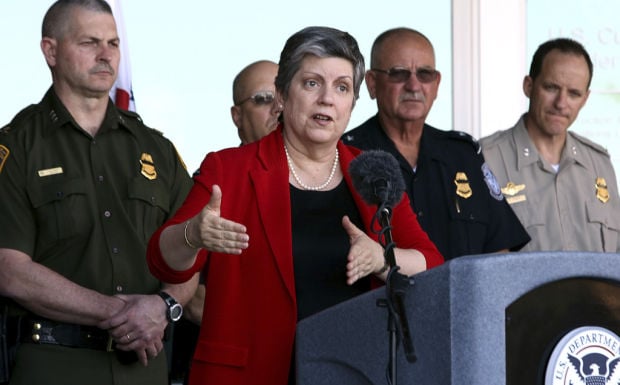 Secretary of Homeland Security Janet Napolitano visited Douglas in April. President Obama said the nation is more secure because of her leadership.

WASHINGTON - Homeland Security Secretary Janet Napolitano announced her resignation Friday to take over the University of California system, leaving behind a huge department still working to adjust to the merger of nearly two dozen agencies after the Sept. 11, 2001 terrorist attacks.

The former Arizona governor came to President Obama's Cabinet with plans to fix the nation's broken immigration system, and she is leaving in the midst of a heated battle in Congress over how - or if - that overhaul will be accomplished.

The most frequent contact by most Americans is with the department's Transportation Security Administration screeners at airports. But its charter is much broader: It comprises agencies that protect the president, respond to disasters and enforce immigration laws as well as secure air travel. It includes the Secret Service, the Coast Guard, the Federal Emergency Management Agency, Immigration and Customs Enforcement and Customs and Border Protection as well as the TSA.

Like the department Napolitano has run since the beginning of the Obama administration, the University of California system is a giant, multilayered organization, though with a far different mission.

Her appointment, which still must be confirmed by the system's board of regents, could triple Napolitano's salary from $199,700 to around $600,000. She said she would stay on as secretary until early September.

It is not clear whom Obama may be considering to replace her.

"Janet's portfolio has included some of the toughest challenges facing our country," Obama said in a statement Friday. "She's worked around the clock to respond to natural disasters, from the Joplin tornado to Hurricane Sandy, helping Americans recover and rebuild."

He said, the American people "are safer and more secure thanks to Janet's leadership in protecting our homeland against terrorist attacks."

She said in a statement, "The opportunity to work with the dedicated men and women of the Department of Homeland Security, who serve on the front lines of our nation's efforts to protect our communities and families from harm, has been the highlight of my professional career."

Napolitano's national profile and government experience trump the fact that she's never held an academic post as she prepares to lead the financially challenged University of California, college administrators and professors said.

The university's Board of Regents will vote on her nomination July 18.

Napolitano would be the 10-campus university's first female president, taking over a system from Mark Yudof with more than 234,000 students and an operating budget topping $24 billion, almost triple the size of the Arizona state budget.

The challenge is formidable as California lawmakers have slashed support for the university system by more than $1 billion since 2007 as they grappled with the recession and resurgent budget deficits.

"She has experience in working effectively with legislators, and that is important for the UC system president," said Peter Likins, who served as president of the University of Arizona from 1997 to 2006, overlapping with Napolitano's term as governor. "She does have to work hard to earn the acceptance, approval and support of the academic community."

UC Regent Sherry Lansing said that while some might consider Napolitano "an unconventional choice," she cited her advocacy for public education as governor and her sponsorship of a policy protecting undocumented immigrants pursuing a college education from deportation.

"Secretary Napolitano has the strength of character and an outsider's mind that will well serve the students and faculty," California Gov. Jerry Brown said in a statement. "It will be exciting to work with her."

Napolitano attended Santa Clara University as an undergraduate, and was its first female valedictorian. After law school at the University of Virginia, she clerked for a judge on the U.S. Court of Appeals for the 9th Circuit. She was Arizona's attorney general before serving as governor from 2003 to 2009, when she joined President Obama's cabinet. As governor, she sat on the Board of Regents, which oversees the state's universities.

Arizona Rep. Paul Gosar isn't being so kind. He slammed the former Arizona governor who resigned Friday to head the University of California.

Gosar issued a statement saying Napolitano's "inaction and incompetence on border security will continue to plague our nation for years to come."

McCain says that while he and Napolitano had their disagreements, she served the nation with honor in one of the toughest and most thankless jobs in Washington.

Take-out only restaurant proposal gets warm reception from some Tucson, business leaders

About 30 local officials, community leaders and entertainment industry representatives met behind closed doors Monday to talk about the economic toll the virus is having.

The former Arizona governor is preparing to lead the University of California system.

Secretary of Homeland Security Janet Napolitano visited Douglas in April. President Obama said the nation is more secure because of her leadership.