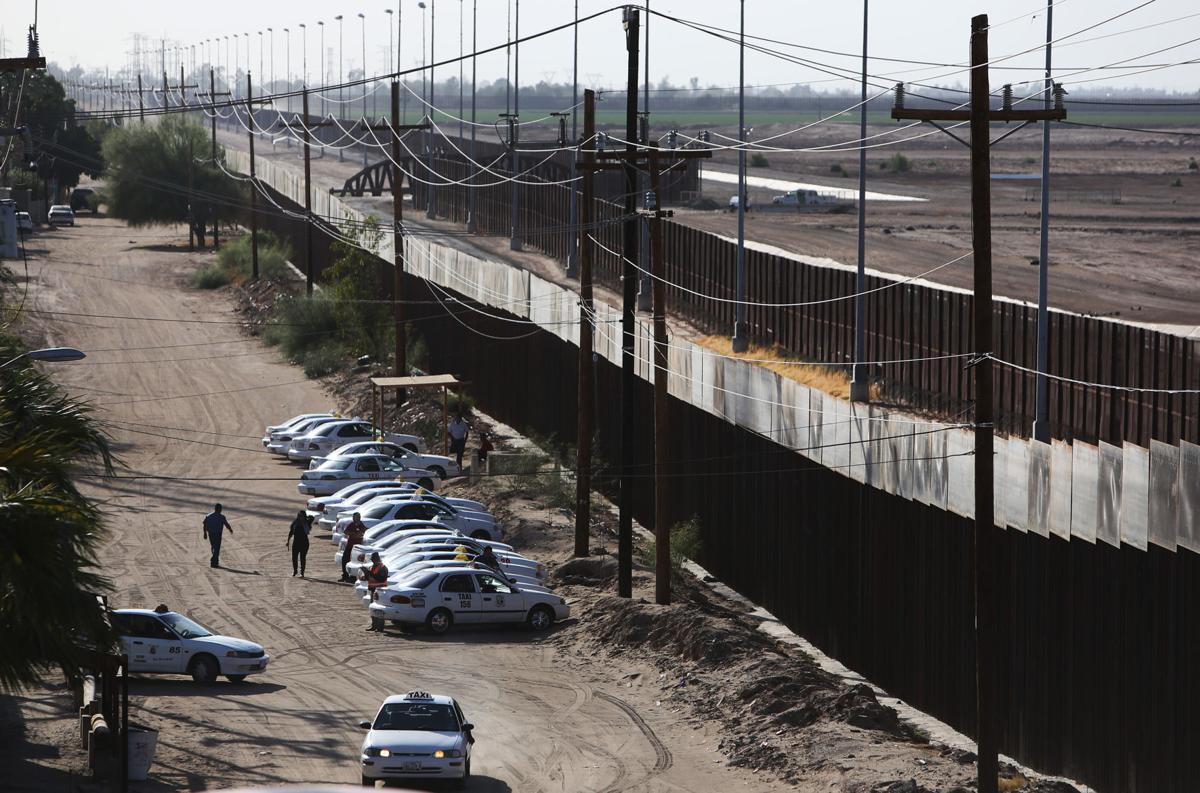 The city of Tucson softened language in its resolution that would have punished companies involved in building a new wall. Above, the triple fence near the San Luis Port of Entry in southwest Arizona. 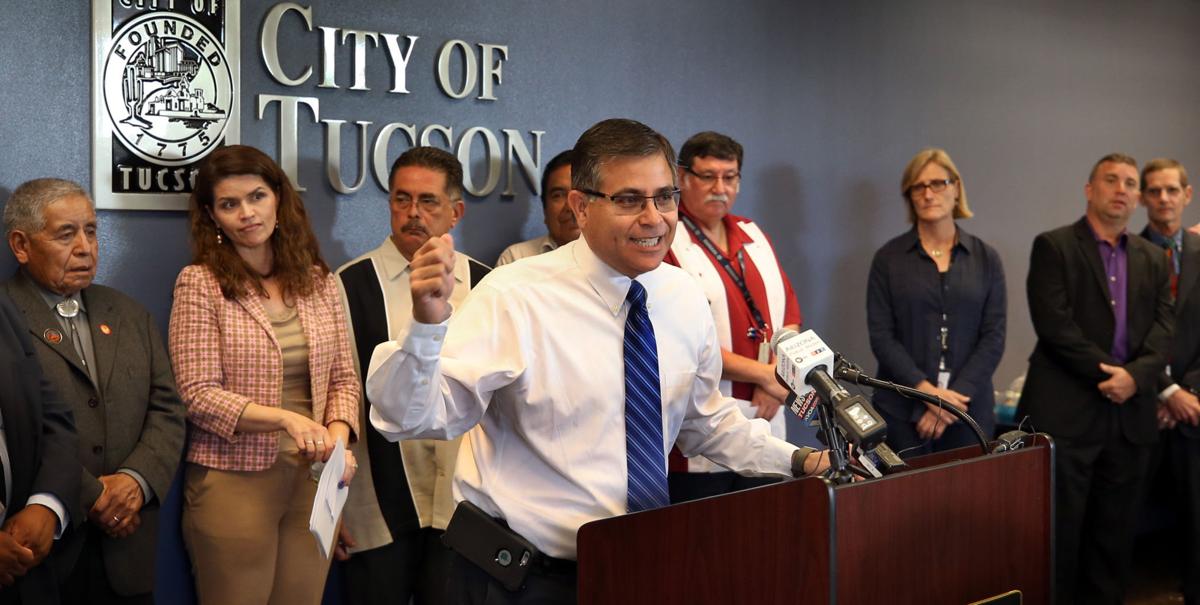 Pima County Supervisor Ramón Valadez decried the proposed border wall as a “tool that doesn’t solve any issue.” In largely ceremonial language, the City Council directed the city to divest holdings in any companies that would profit from building a wall. 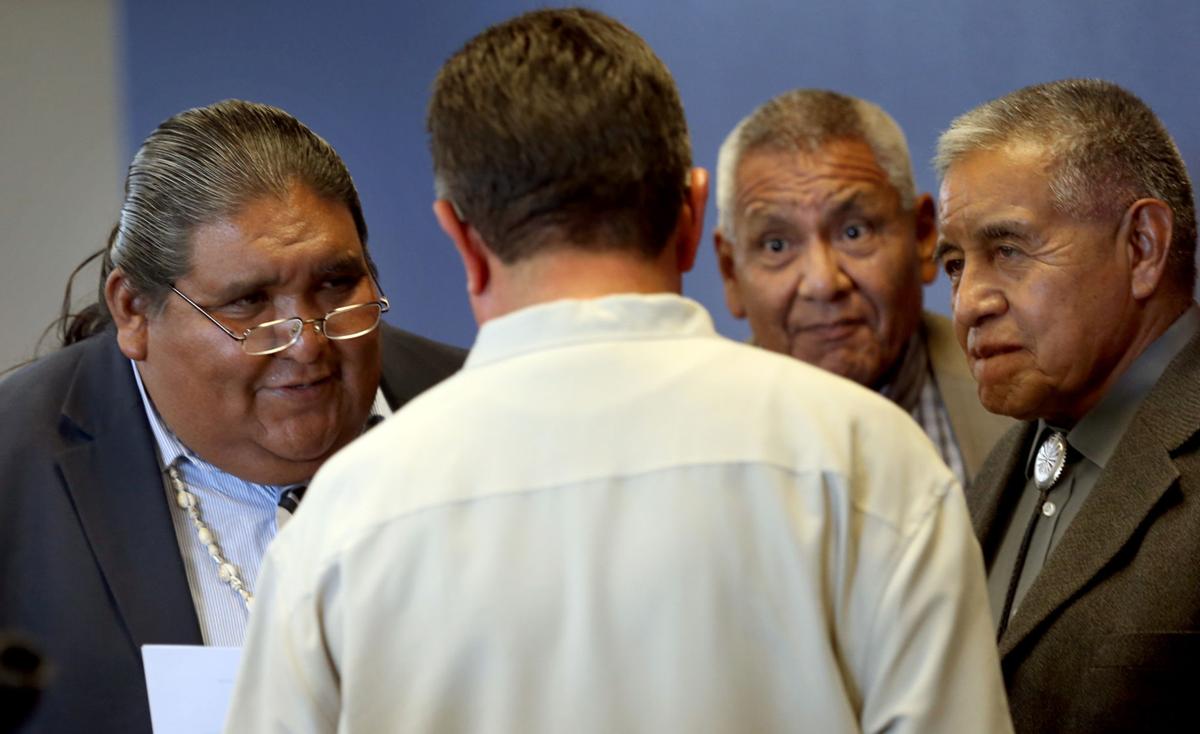 Pima County and the city of Tucson are taking a stand against President Trump’s proposed expansion of the U.S.-Mexico border wall, calling it “an offensive and damaging symbol of fear and division.”

On Tuesday, the county Board of Supervisors and City Council approved similar resolutions denouncing Executive Order 13767, which directed the Department of Homeland Security to “take all appropriate steps to immediately plan, design, and construct a physical wall along the southern border,” among other policy changes.

Tucson’s resolution went a step further by originally calling for the city to stop working with companies that “become involved in the designing, building or financing of the border wall.”

However, the county’s resolution didn’t contain such a provision because the County Attorney’s Office advised against it, said Supervisor Richard Elías.

The city’s resolution originally stated the council would require the disclosure by “companies of their involvement with the border wall prior to city investment in those companies” and that “the city of Tucson does not wish to be associated with any company that participates in the design, construction or financing of the border wall in any way.”

The council opted to revise a section of the proposal, changing that the city would not "associate with" businesses that work on the wall to "does not wish to condone" any business that works on the wall. The resolution calls for the city to divest holdings in any companies that would profit from building the wall along the Mexico border.

The language contained in the city’s resolution is largely ceremonial, although it does direct the city to divest its investment funding "as allowed by law." No publicly traded stocks or mutual funds are tied to the proposed border wall project at this time, city officials said.

City Councilwoman Regina Romero attempted to salvage the controversial section directing the city to refuse to work with certain companies, saying it was the teeth of the resolution. But she failed to convince her colleagues as City Attorney Mike Rankin said federal procurement laws would prohibit the city from going further than reviewing its investment portfolio.

Michael Varney, the president and CEO of the Tucson Metro Chamber, wrote a letter hours before the meeting to the council formally opposing the resolution. He said the council can move forward with any political statement it wants but should leave local businesses out of it.

“The city does not have to include punitive measures that will only damage local companies in order to make that statement,” he said.

Brian Turmail, a spokesman for the Associated General Contractors of America, was initially critical of the resolution, saying it hurts the local construction industry.

“It holds construction workers hostage to a policy fight that has nothing to do with them,” Turmail said.

The precedent of blacklisting companies for participating in a federally backed program is a “very slippery slope,” he said, arguing other jurisdictions might refuse to work with a construction company because it once built a Planned Parenthood center.

“It is a really poorly-thought-out policy,” Turmail said before the changes were made to the resolution, which was approved by the council 6-0, with Councilman Steve Kozachik not at the meeting.

Among other things, it argues that migrant apprehensions are at historic lows, border communities often have low crime rates, thousands of migrants have died in the borderlands trying to evade fencing and other elements of “militarization,” and that a border wall is an “offensive and damaging symbol.”

“We share the Sonoran Desert together with our neighbors,” said Elías, who asked that the resolution be put on the agenda. “And the nation of Mexico has been a good neighbor to us.”

Supervisor Ramón Valadez decried the proposed border wall as a “tool that doesn’t solve any issue.”

The county resolution was approved with a 3-2 vote, over the objections of supervisors Ally Miller and Steve Christy.

Miller argued that additional wall construction is an effective way to protect against the entry of criminals and drugs, and rejected the resolution’s claim that the wall has led to a “human rights crisis.”

“I don’t think our border is militarized enough,” she said.

Christy said the resolution was another example of the board “delving into areas outside of its purview,” and mocked the prospects of such a measure having any meaningful impact on federal policy.

“This board has a county to run,” he added. “And what are we doing with these national issues in a grandstanding manner to make us all feel good?”

Elías countered that Pima County has the longest border with Mexico of any southwestern county, adding that “the people in the borderlands deserve to have a voice.”

Gosh, I wonder how many city council members have walls around their backyards? I think they should tear down those walls right away!

Our elected officials have now become the moral voice for the public. Their views, and only their views, are now acceptable. They will choose …

The measure was approved with a 3-2 vote.

A woman survived nearly two days after smugglers left her in a metal ambulance compartment.

Many community members spoke in favor of a health-care resolution.

Tucson voters to decide on raises for mayor and City Council

The city of Tucson softened language in its resolution that would have punished companies involved in building a new wall. Above, the triple fence near the San Luis Port of Entry in southwest Arizona.

Pima County Supervisor Ramón Valadez decried the proposed border wall as a “tool that doesn’t solve any issue.” In largely ceremonial language, the City Council directed the city to divest holdings in any companies that would profit from building a wall.