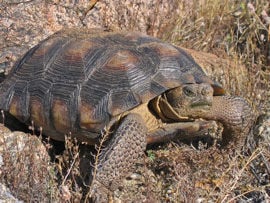 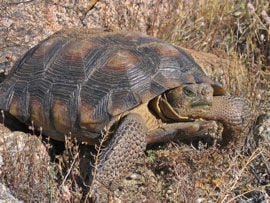 You may own Sonoran Desert Tortoises but you may not allow them to reproduce...

The Sonoran Desert tortoise, whose range spans much of the state including Tucson, won’t get federal protection, the U.S. Fish and Wildlife Service announced Monday.

After seven years of review, the wildlife service concluded that the risks and threats to the tortoise aren’t serious or imminent enough to justify listing it as endangered or threatened. It was the third time since 1987 that the service had refused environmental groups’ efforts to secure federal tortoise protection.

The decision spares homebuilders and ranchers from additional regulations for tortoise protection. Development and livestock grazing were listed by environmental groups as among the threats to the species, with other threats including invasive species, fire, habitat fragmentation by roads and other infrastructure, human-tortoise interactions and climate change.

While climate change in particular is likely to impact future tortoise populations, “The severity, scope and timing of those impacts is unknown because the intensity of the environmental changes is unknown and the response at the species level is unknown,” the service said.

Environmentalists expressed disappointment at the decision and complained it was based too much on what one called “theoretical” science and not hard data. WildEarth Guardians and the Western Watersheds Project had petitioned to list the tortoise. Greta Anderson, the Watersheds deputy director, said she couldn’t comment at this time on the possibility of litigation.

The Arizona Game and Fish Department praised the decision and noted that the data it has collected on tortoises over 25 years played a role in the federal decision that listing isn’t warranted.

The Sonoran tortoise lives in much of Southern, Western and Northwestern Arizona and two-thirds of Northern Sonora. Its habitat is mainly rocky outcrops along the base of mountain ranges, both steep and gradual slopes, and, to a lesser extent, in intervening desert lands between the mountains. It is a separate species from the Mojave Desert tortoise, which lives in California and Nevada, and has been listed as threatened since 1990.

Monday’s decision is a change in the service’s position. In 2010, the agency said the tortoise’s situation was bad enough to warrant federal protection, but that other species deserved higher priority because they were in more danger.

Monday, the service said it had since conducted a far more thorough assessment of the tortoise, including extensive computer modeling to look at available tortoise habitat. That analysis “didn’t indicate that it was as grim as what we had found in 2010,” service spokesman Jeff Humphrey said.

The service also cited a recent conservation agreement signed with other federal agencies and Arizona Game and Fish to continue to identify and address threats to the tortoise, covering about 55 percent of its habitat.

But Michael Connor, the Watersheds Project’s California director, noted that when the group petitioned for the tortoise listing back in 2008, it cited a regional study showing a 51 percent decline in the reptile’s population at 17 sites since 1987. But the service’s decision this week cited what he termed “a population simulation model” to estimate current populations and predict future populations, he said.

“Clearly, we need to look at that data and find out what’s going on,” Connor said. “It’s not clear as to whether the service used any real population analysis.”

Spangle, however, noted that since 2008, tortoise populations have bounced back regionally as rains have picked up.

Although the region is still in a drought, it’s not nearly as severe as it was in the 2002-04 era, he said.

“The sites documented to be declining have come back at or near pre-drought levels,” he said.

Currently, the service estimates that the Southwest has about 38,000 square miles of potential tortoise habitat. While tortoise populations are expected to decline slightly over the coming decades, even under the worst-case scenario, authorities still expect populations of 316,000 in 50 years and 278,000 in 75 years, compared to an estimated population today of at least 470,000, the service said.

You may own Sonoran Desert Tortoises but you may not allow them to reproduce...