Read Today's E-Edition
Share This
Steller: Sen. Jeff Flake chose to quit rather than fight for the principles he espouses
Share this
1 of 2 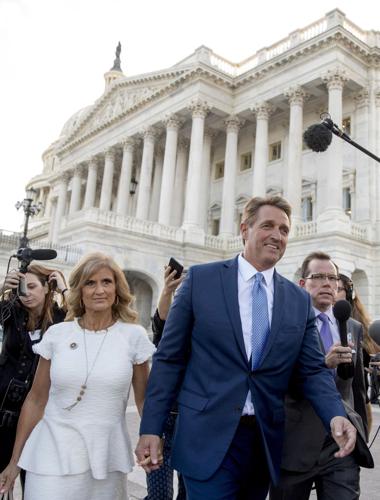 Early in Sen. Jeff Flake’s dramatic Tuesday speech, he made what sounded like a bold statement.

“There are times when we must risk our careers in favor of our principles. Now is such a time.”

Appearing as this did at the beginning of his speech, it suggested Flake was about to do so. But he didn’t.

Instead, Flake announced he is not going to run for re-election after his first term. He’s leaving the Republican nomination to Kelli Ward or a candidate as yet unrevealed, and he’s announcing he won’t be bound by the usual political considerations as he wraps up his remaining 14 months in office. He’ll be Jeff Flake Unbound, defending the honor of our institutions.

That’s interesting, and we should listen to the warnings he’s giving us about the dangerous degradation of our politics. But it’s not risking a political career.

Flake, speaking to fellow senators, would have been more accurate if he had said “There are times when YOU must risk YOUR careers in favor of YOUR principles. Now is such a time. And I’m outta here.”

Much of his speech — which was filled with weighty concepts such as “duty,” “conscience,” and “moral authority” — was actually directed at his Senate colleagues, it appears. Flake was exhorting them to act in line with their consciences even as they risk their careers to do so. Listen to this phrasing from later in his speech:

You could hear in those words the backroom conversations those GOP senators who are not Trump loyalists must be having. They oppose Trump’s behavior and some of his policies. They want to speak out, but they are afraid of a primary challenge, of making enemies, of the GOP base.

They are afraid of the same factors that ultimately made Flake give up and withdraw prematurely from the race.

He’s not wrong about the challenges. Despite some loud and proud GOP critics of Trump, most of the party loves him. Trump has an 80 percent approval rating among Republicans, according to the latest Gallup poll.

Eppihimer is right — the GOP is solidly with Trump and against those who criticize him.

I think that is a shame. It is a shame that Republicans have not broadly rejected Trump’s wild fear-mongering against immigrants, Muslims and others, his unnecessary inflaming of world tensions, and his undignified lashing out against even powerless critics. The fact Republican voters have not yanked the leash on Trump for his indecency is disturbing.

But why didn’t Flake take a real risk and continue to fight that fight in the electoral realm? Why not face the challenge? Why be so delicate as to unfold a broad critique of Trump for the damage he is doing to our politics, but not even mention his name?

Trump is not Voldemort, the evil lord in the Harry Potter series who is so feared that people referred to him as “He who must not be named.” If Flake is going to take Trump on, he should name him, cite his transgressions, and fight them in the Senate and on the ballot.

He said Tuesday, “I have decided that I will be better able to represent the people of Arizona and to better serve my country and my conscience by freeing myself from the political considerations that consume far too much bandwidth and would cause me to compromise far too many principles.”

But an even bolder decision would have been to free himself from political considerations and continue to run.

Dramatically, Flake said in his speech, “When the next generation asks us why didn’t you do something, why didn’t you speak up — what are you going to say?”

After Tuesday, Flake will be able to tell his grandchildren that when faced with this threat to our institutions, he chose to retire from the Senate.

Poll: Will Trump's popularity in Arizona trickle down to Senate race?

Pollster says the president remains more popular in Arizona than nationwide, but that may not help the GOP hang on Jeff Flake's Senate seat.