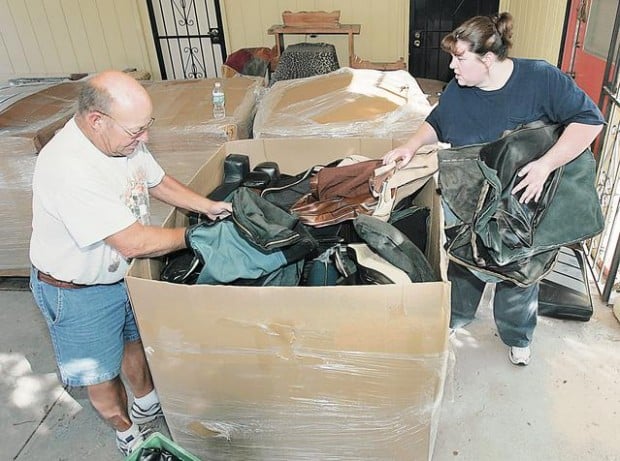 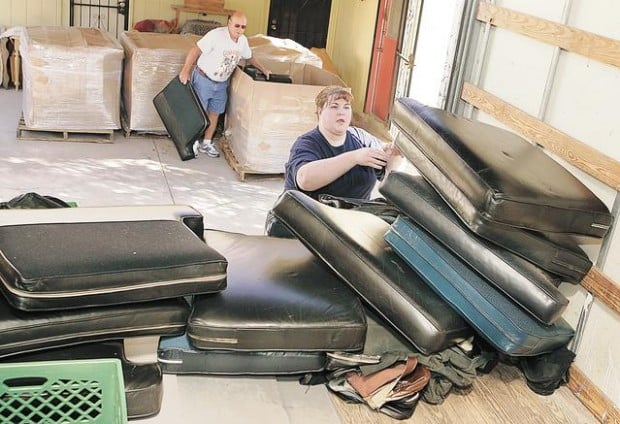 The U.S. House of Representatives is cutting down on waste.

Instead of discarding thousands of pounds of leather as it usually does each year when it reupholsters furniture, the House has shipped a bunch of it to Tucson.

And in the spirit of belt-tightening, the charity that received the scraps had to pick up the tab for shipping and handling.

"I wrote (the House) a $350 check for shipping," said Heather Robinson, who runs the home-furnishings recycling charity Refused Reused, which fixes up old furniture for nonprofits and schools. "That felt weird."

The House reupholsters furniture on an as-needed basis and had always thrown away the 40,000 square feet of scrap leather it goes through each year, said Jeff Ventura, a spokesman for the House chief administrative officer. This year, it started recycling under the Green the Capitol program, which speaker Nancy Pelosi instituted in June 2007 to cut down on government waste.

"In a nutshell, what we're doing is lowering the House's overall carbon footprint and saving energy in any way we can," Ventura said.

Ventura would not provide the cost of the reupholstering or say how often each piece of furniture is reupholstered in the 6 million square feet of office space inside five House buildings.

"I've never had reupholstering done in D.C. or here," said Rep. Raúl Grijalva, D-Ariz. "The fact that it's being circulated — recycled — is a good thing, and I'm glad they picked Tucson.

Through a spokesman, Rep. Gabrielle Giffords said her Washington office has not been reupholstered, either. She took office in 2007.

Beth Pence, director of work-flow management at the House chief administrator's office, said some pieces of furniture go 10 years or more between reupholstering. She said the furniture is being reupholstered with "green leather," which is biodegradable, unlike the leather the House has used before.

Hollywood designer Rick Rifle, a Refused Reused volunteer who is well-versed on the cost of raw furniture materials, estimated the value of the leather in the Tucson shipment at $2,400.

Rifle, who has appeared on several episodes of "Trading Spaces," said there is good reason to reupholster leather furniture.

"Leather wears unevenly, and there can be sunlight on some pieces, making it break down faster. There's also a lot of rub factor," he said. "There has to be some dignity to the institution, otherwise why don't we just put folding chairs in there?"

Pence contacted Robinson about the leather on June 16 after reading about Refused Reused online. Pence told the Star that Refused Reused appeared to be the only operation of its kind that could handle the amount of leather the House intended to ship, and said she'd keep sending Refused Reused all its scrap leather as long as the Robinsons put it to its intended purpose.

Heather Robinson eagerly accepted and said she and her mother/business partner, Jan Robinson, could make good use of the scraps and cushions. One 200-pound box went to the Boy Scouts. One will go to Rifle and HGTV network designer Kristin Casey — who will make a patchwork leather bedspread and auction it to benefit Refused Reused. Heather and Jan may use the rest to make dog and cat beds to donate to pet shelters.

The Boy Scouts were thrilled by the donation.

"We'll probably try to use it for our Cub Scout camp and craft little items," said Tom McVeigh, director of field services for Catalina Council Boy Scouts of America.

Heather Robinson said she was inspired to start Refused Reused after meeting the Dalai Lama in 2006 at the Gathering of Hearts Illuminating Compassion event in San Francisco. Heather and Jan launched the charity in 2007. Together with Rifle and Casey, the Robinsons used recycled parts to remodel a kitchen at the New Beginnings for Women & Children shelter in February 2008.

The day the special delivery of leather arrived, Robinson said, she eyed the UPS freight truck as it rumbled down the road toward her grandmother's east side home.

The deliveryman lugged box after box onto the carport — four in all, totaling 800 pounds.

And more is on the way. Robinson has been promised another shipment soon, this time five boxes with 1,000 pounds of leather.

"We're at the point where the little idea of ours has grown so much that we need a storage facility and a truck," Robinson said.

With the help of a dolly, the deliveryman hoisted the first of four square 42-inch crates and dropped it off under the carport, Robinson said.

Eyeing a label that read "U.S. House of Representatives," the UPS man asked her: "What have you got in there? Senators?"

Tucson is considering amending its code to allow for accessory dwelling units, or casitas, to serve as living spaces. The city's code currently prohibits the structures from being dwelling units.

Chairwoman Sharon Bronson raised questions about funding sources, the program's accountability and a business plan showing how the pilot program would work