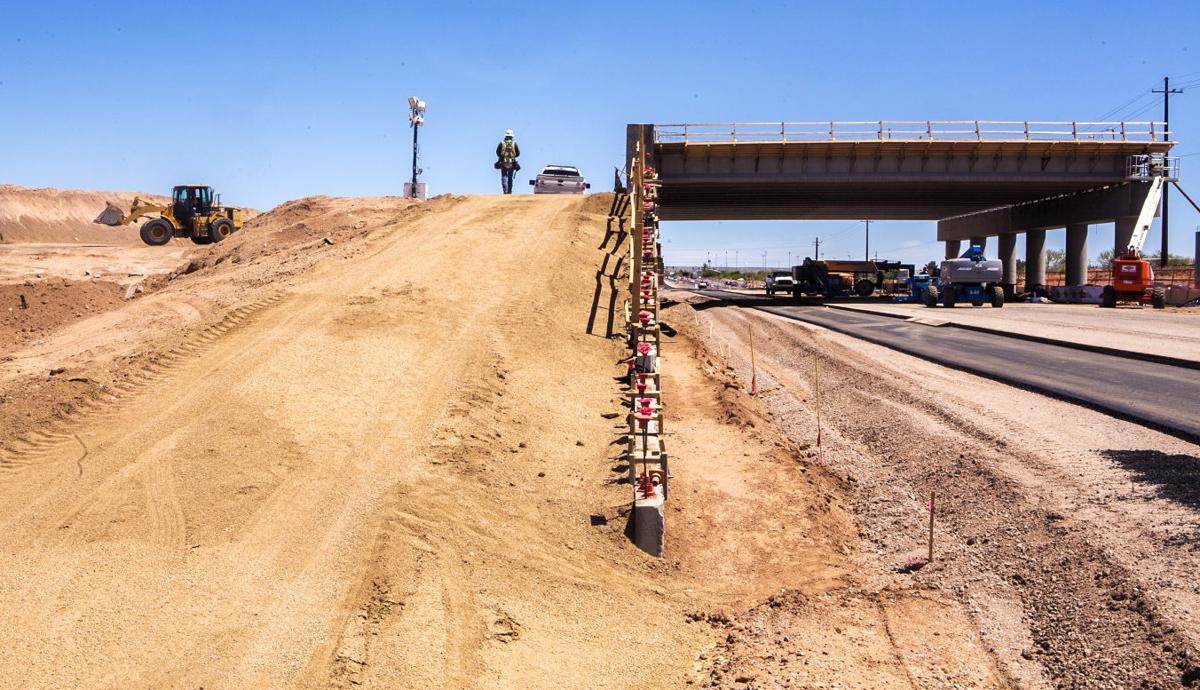 The RTA-funded wildlife crossing bridge on Oracle Road near the Pinal County line is under construction north of Oro Valley.

As the road-widening project on North Oracle Road progresses, many people have wondered why crews are building a massive bridge just north of Oro Valley.

Only this bridge isn’t meant for cars, or even pedestrians. Rather, it’s what officials call a wildlife crossing.

“This is the one point where we have the east-side wild lands coming all the way up to the roadside,” said Jim DeGrood, deputy director of the Regional Transportation Authority.

The overpass, and a wildlife underpass being built about a mile south on Oracle, will cost $11 million and are funded through the RTA.

And if you were wondering who authorized such projects, here’s a reminder: You, the voters, did.

The Oracle overpass will be the largest such project the RTA has completed to date. But it’s not the first, nor is it the first in the state.

“At the Arizona Department of Transportation, we have a pretty long history of doing innovative wildlife crossing,” said Dustin Krugel, ADOT spokesman.

The department built three overpass structures on U.S. 93 near the Nevada border and Lake Mead, for example.

Krugel said the bridges were built for the desert bighorn sheep population cluster in the area.

An analysis the department did recently shows the bridges have worked as planned, with cameras on the overpasses documenting more than 5,000 bighorn sheep crossings over a 45-month period.

The study also found car collisions with animals in the area dropped by 80 percent after the wildlife bridges were constructed.

ADOT also built a wildlife crossing designed for elk on Arizona 260 near Payson.

The crossing sites along Oracle were chosen, in part, because of studies showing the large number of animal-car collisions in the area.

Carolyn Campbell, an environmental activist with the Coalition for Sonoran Desert Protection, said roadkill studies were only a piece of the selection process.

“It’s more about where there’s not yet encroachment except by the road,” Campbell said.

She also said the area represents a critical link between the mountains. By creating the link, Campbell said the chances of animal populations becoming isolated and inbred also will decrease.

If you’re wondering how the animals will know to use the overpass, that’s covered, too.

About $1 million of the budget for the crossings is going toward fencing that will funnel animals onto the bridge.

This, too, is something the RTA and ADOT have successfully done in the past.

DeGrood said the overpass will be covered with a 4-foot layer of soil and vegetated to make it as natural looking as possible.

“The idea is to use vegetation to cut down on sightlines,” he said.

Beginning Tuesday, ADOT will reduce eastbound Interstate 10 at Drexel Road to one lane. The lane reductions are planned from 9 a.m. to 1 p.m. to allow for road maintenance.

Beginning Tuesday and running through Friday, city crews plan to fog seal Sixth Street from Campbell Avenue to Country Club Road and Sixth Street from Ferro Avenue to Park Avenue. Work hours for the project will be 8 a.m. to 4 p.m. each day. During this work, travel-lane restrictions will be in place.

Beginning Monday and lasting through Friday, the Pima County Department of Transportation and The Regional Transportation Authority plan a temporary closure of the intersection of Old Vail Connection Road east of Nogales Highway to perform major drainage improvements as part of the Nogales Highway/Old Nogales Improvement Project. Work will include excavating and installing a large concrete box culvert.

Traffic will be detoured onto Frazier Road until the roadway is reopened.

Some readers have asked when the city plans to repair Speedway on the far east side.

This question came just about the time TDOT notified Road Runner about plans for eastside resurfacing as part of the $100 million bond package.

City also will be repaving Pantano between Speedway and Broadway beginning June 15 and on June 18 plan to start repaving Broadway between Pantano and Camino Seco.

RTA gets $400,000 proposal for tortoise tracking

The tortoise telemetry part of the project would cost $14,600.

The RTA-funded wildlife crossing bridge on Oracle Road near the Pinal County line is under construction north of Oro Valley.