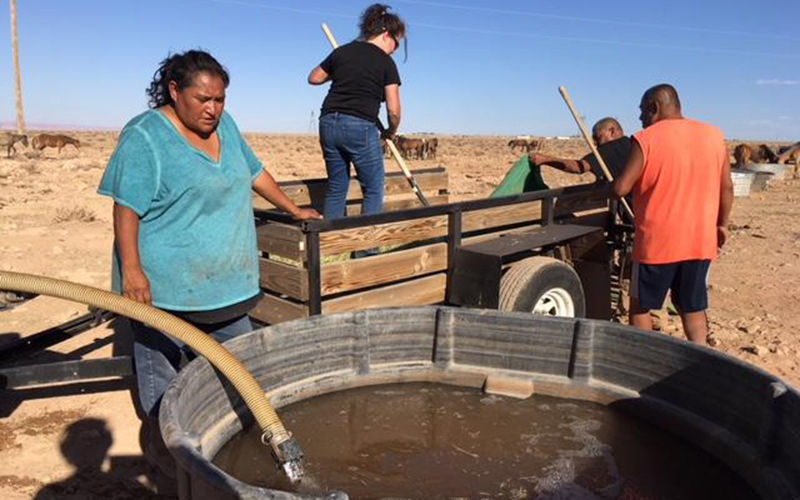 Volunteers unload hay from a trailer and supply much-needed water for the wild horses found on the Navajo Nation. 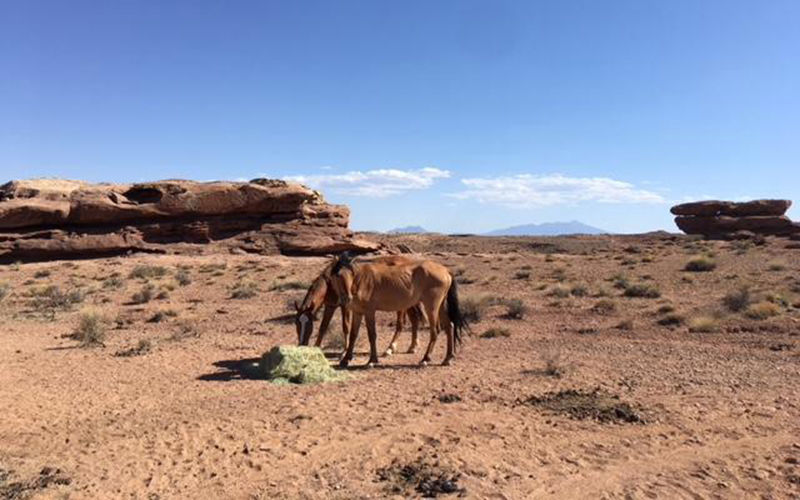 For several years the Navajo Nation has tried to find a solution for tens of thousands of horses that damage the land and compete with livestock for food and water. 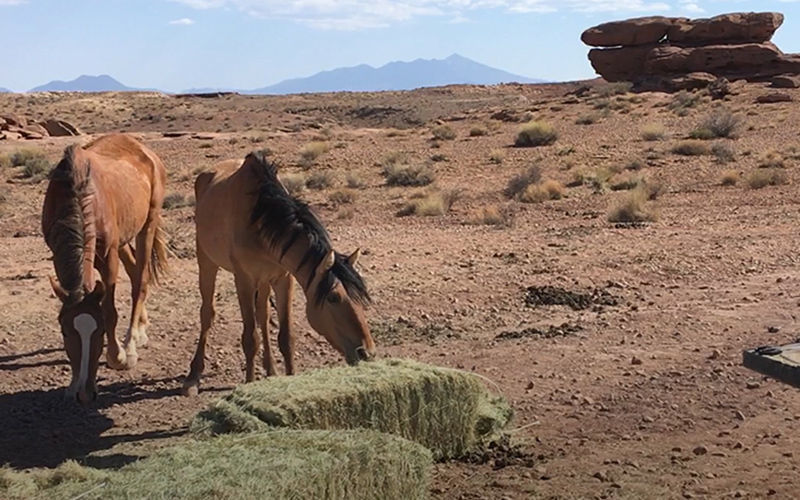 NAVAJO RESERVATION — Glenda Seweingyawma plucked quarters from a giant pickle jar and dropped them into the water-station vending machine to fill up a large plastic barrel. It’s a common scene: About 40 percent of Navajos living on the reservation have to haul their drinking water.

But this water wasn’t for humans. It was for wild horses, which have come to depend on it.

“We took one load,” Seweingyawma said. “By the time we get back over there, it was already all gone. And then we get another load of water. And then we go back again and then it’d be gone. I thought, ‘Oh my gosh, we can’t keep up with these horses.’”

Two weeks ago, Seweingyawma and her friend Paul Lincoln woke up to a group of horses outside their trailer.

“When we first saw them, their heads were down and (they were) walking really slow,” Lincoln said. “They were just kind of like zombie horses. And that’s when we saw these ones drop in front of us, and then we said, ‘That’s it. We better start with buckets of water.’ ”

The images, some of the most alarming we’ve seen of the drought, have prompted many people — both on and off the reservation — to take action.

Thanks to donations, including food and water from people all over Arizona, volunteers now are able to leave alfalfa and fill several water tanks. About a dozen people are taking care of about 200 horses.

Lincoln drove his truck over dirt roads to the first stop, a clearing protected by boulders and dry scrub brush in the high desert of northeastern Arizona.

We came around a bend and there they were — a couple dozen horses that appear more spirited on this day, like the powerful symbols of freedom they’ve come to be known as. But Lincoln noticed a new one — a skinny speckled-gray stallion whose ribs you could count.

He whistled at the herd. “Hey, where you guys going? Come get some water.”

Usually they’d run from any sign of humans, but not lately, not when they haven’t seen rain in months. Navajo officials said this year has been the driest in 15 years of drought.

Bidtah Becker, director of Navajo Natural Resources, said the tribe flew over the reservation two years ago to get an accurate count and found at least 30,000 horses in an area the size of West Virginia.

“It’s as much a range-management issue or grass-availability issue as it is a horse issue,” Becker said. “Horses compete with the livestock that Navajo people raise on the range.”

One horse eats 32 pounds of forage and drinks 10 gallons of water per day.

Becker has asked the tribal council for $1 million to support a plan that would partner with outside groups to round up horses for adoption. But Becker said that would require yearly inoculations and staff or volunteers who can wrangle horses.

“Community support and getting the community not just on the Navajo Nation but surrounding the Navajo Nation to work together to address the number of feral or free-ranging horses on the nation is critical,” Becker said.

Many Navajo are concerned the horses will be taken to slaughterhouses, a method that was supported by the previous administration.

Becker said that is not part of the current plan because Navajos believe horses to be sacred.

That’s why Lincoln has felt so strongly about saving them.

“They’ve been around longer than we have, so they’re sacred,” Lincoln said. “A lot of our traditions, we’re barely holding on to them.”

And, he said, he feels like the horses have come to him, asking for his help — and he’s able to give it.

Lincoln and Seweingyawma drive a second tank of water to another site next to a broken-down windmill. Tracy and Buddy McDonald show up from Flagstaff with water and hay. Everyone pitched in to unload it. They had read about the “horse heroes,” as they’ve been called, on social media.

“If you’re out here, there’s nothing to eat,” Tracy McDonald said. “And there’s thousands of horses. We need something to control these feral horses so we can continue to have them. It’s part of who we all are. But there’s such an overpopulation there’s no where near enough water or food.”

Tucson pals sharing magic of horses, one rider at a time

The Tucson friends started a new non-profit to rescue horses and teach riding to people of all abilities.

2 Tucson horse stables settling in, with both in a helping mood

Equestrians learn techniques for managing their horse, ways to stay confident, be assertive.

12 to be inducted into Native American Hall of Fame, several with Arizona ties

Volunteers unload hay from a trailer and supply much-needed water for the wild horses found on the Navajo Nation.

For several years the Navajo Nation has tried to find a solution for tens of thousands of horses that damage the land and compete with livestock for food and water.