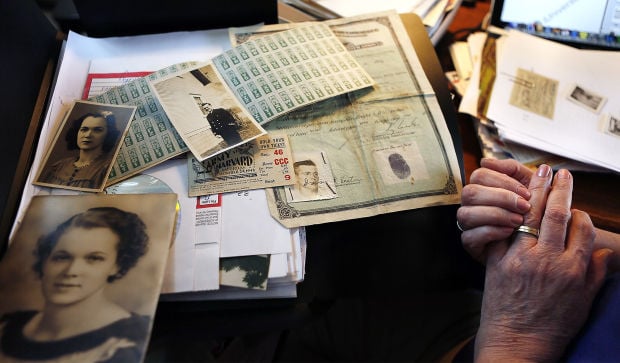 Jane Beaton Bartow's hands rest among some of the keepsakes from her father at her home in Oro Valley. Included are World War II ration coupons and photos of her father and mother, Darrow and Elinor Beaton. Bartow has written a book based on the letters. 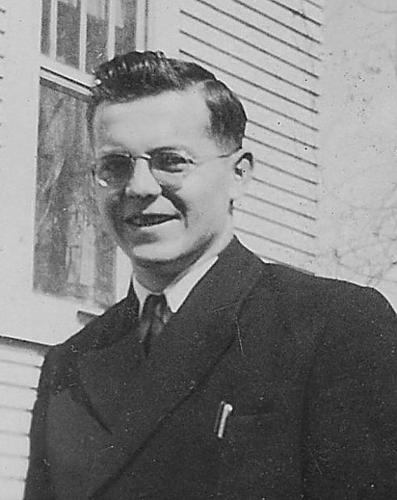 Darrow "Beat" Beaton poured out his feelings to Elinor Landgrebe Beaton in hundreds of letters. They were married June 14, 1944. 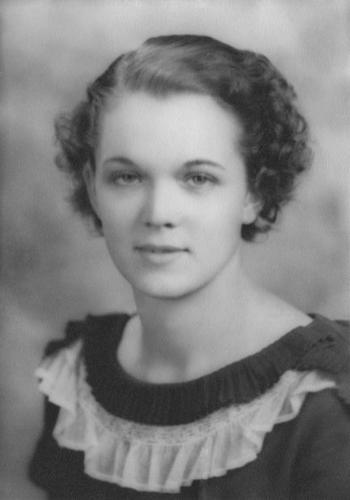 Elinor Landgrebe Beaton was the recipient of hundreds of letters from Darrow Beaton during WWII. 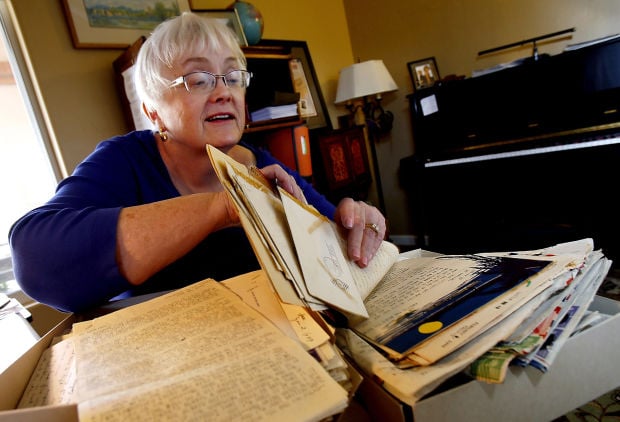 Jane Beaton Bartow pores over a stack of WWII-era letters and correspondence from her father to her mother. Bartow has written a book based on the letters, which tell the story of her father courting her mother by mail during World War II. 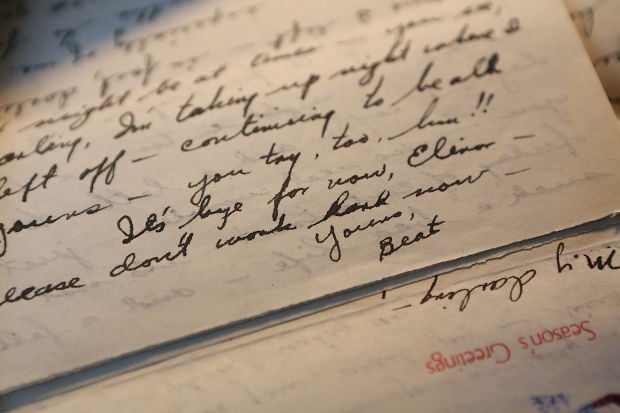 Some of the letters Darrow wrote were handwritten while others used the Mackay radio (below). 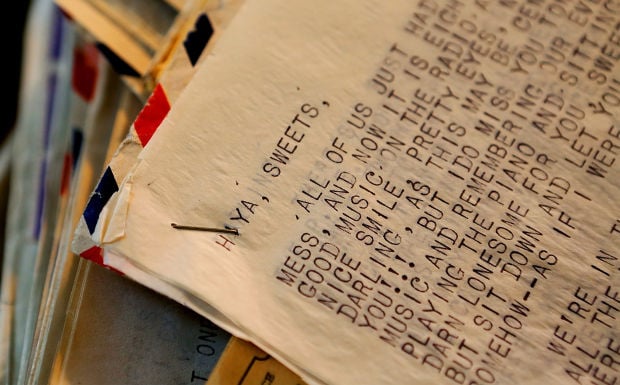 Detail of a letter written during WWII by Darrow Beaton to his future wife, Elinor, while he worked the radio. 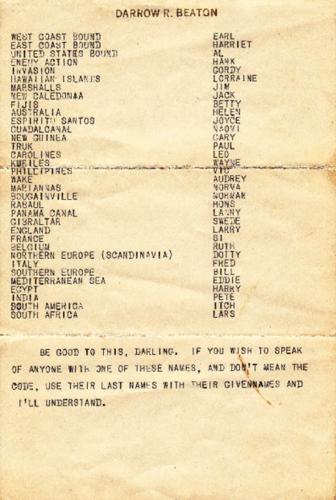 Darrow Beaton devised this secret code so that he could let his love know where he was when he wrote her.

As Darrow Beaton was dying from lung cancer in 2008, the World War II veteran mailed his eldest daughter four bankers' boxes, each one overflowing with a lifetime of family photos.

Hidden away under those photos - most likely unknown to Beaton - were letters. Hundreds of them, some nine pages long, single spaced and typed in capital letters. They were on onionskin and fancy hotel stationery. There were postcards and telegrams, a cache of memories from long ago.

The more than 1,000 pages, written between December 1941 and November 1945, tell the story of a young Beaton and the love of his life, Elinor Landgrebe Beaton.

They detail the years Beaton spent in the merchant marine during World War II. It was a story his daughter learned only after his death.

"He, like so many other servicemen, didn't talk about the war. Ever," said Jane Bartow, the eldest of the Beatons' three daughters, who lives with her husband, Jerry, in Oro Valley.

"It was the last generation that had to be brave," she said. "They couldn't cry, they couldn't share."

After reading the letters, Bartow, a retired elementary-school teacher, wrote a book containing many of the letters and telling the story of her parents during the war years. She recently started a blog at WorldWarIIDaughters.org

"How many girls my age don't have any idea what their parents were doing during World War II, whether they were on the home front or in battle?" said Bartow, 68.

Sharing stories can be therapeutic for veterans and family members alike - if both parties are open to it, said Pepé Mendoza, the son of a WWII veteran and spokesperson for the Southern Arizona VA Health Care System.

"Many who served in World War II are closed to talking about it," he said. "Each person is so different, and I can only speak for myself, but my dad didn't want to talk about it. Period."

A variety of services are available for veterans and their families to help them talk about their experiences, including counseling and patient advocacy, Mendoza said. He said the first step is to get vets enrolled in health care to ensure they have services available.

Bartow knew her dad had served during the war, but she knew none of the details of his service - or of the wartime romance between her parents.

But in the letters her mom had saved and taken with her from home to home, Bartow pieced together their story.

Darrow, known as "Beat" to his friends, had grown up on the wrong side of the tracks in Fargo, N.D. As a child, he would sneak into restaurants and slip bread from the breadbaskets to keep from going hungry.

After graduating from high school, he was on his own. This Irish kid lived at the YMCA and put himself through night school by hauling seeds to farmers at the Interstate Seed Co.

Elinor was a teacher and the daughter of a Lutheran bishop. She had dated only German men, and had 13 letters of proposal from 13 suitors.

She was 26 and engaged to two men when she bumped into 20-year-old Beat on the streets of downtown Fargo in December 1941.

"She was walking home downtown one night and he was coming out of a wedding," Bartow said. "All of his friends were getting married before going off to war. My dad fell in love with her."

Elinor wasn't interested. He was far too young and this beautiful, stylish woman had dreams of becoming the next Peggy Lee.

"But there was something exciting about him," Bartow said. He was different from her other suitors.

Beat decided to join the military. "He wanted to be in the Navy because my mother loved the Navy uniform, but he wasn't accepted. He had flat feet and a lazy eye."

"He heard that the merchant marines were looking for guys and they had a similar uniform," she said.

After seven months of rigorous training and many letters to Elinor, Beat shipped out in July 1942 as a radio operator, making him the second in command. He was on one of the first Liberty ships, mass-produced cargo ships. Some later fell apart in high seas.

"On his first ship he was the only radio operator and would have to take messages every four hours," his daughter said. He never got a full night's sleep.

The ship delivered arms, ammunition, food and other supplies to the troops, usually traveling to the Pacific.

Since he spent many hours at the Mackay radio, he would write letters to Elinor. Some were written over days.

"They are so charming, so full of what life was like on the ship without divulging where they were," Bartow said.

The two developed a code. People's names represented the names of countries, bodies of water and continents.

Most of the faded letters are from Beat. Once or twice a month, Elinor would write him.

"He was absolutely smitten with her," Bartow said. "And she loved him."

His letters were sweet. "'Tis goodnight for now, darling," he wrote in one. "Best get some sleep before the early morning broadcast. I love you, Bunny."

The letters also reveal peril. "I never understood the danger he was in, floating on the seas. They were targets," Bartow said.

He wrote about "many fish in the water" - code for torpedoes.

By 1944, Elinor had moved to California to pursue her dream of becoming a singer. Beat was headed to D-Day, but his ship was hobbled and returned to Los Angeles.

When he arrived, she met him, and the two made their way up the coast - he by ship and she by train.

After he left, a test revealed she was pregnant, but she did not share her news with her parents. She was relieved a few weeks later when she thought she was no longer pregnant, but it turned out she had been expecting twins, and miscarried one.

Morning sickness continued, and another pregnancy test was positive. In March 1945, Bartow was born.

Mother and baby moved in with Elinor's parents, and Beat joined them when his service - and his letters - ended in November 1945.

He went on to finish his degree. And he eventually made good on a promise he made to his beloved during the war.

"He told her, 'Someday I'm going to have $2 million,' " Bartow said. He made his millions producing weekly pill organizers and medicine spoons for children.

Elinor and Beat were married more than 60 years. She died in 2007, he the following year. He never spoke of his experiences, and Bartow believes her father would never have intentionally sent her his letters. They revealed too much.

"He had closed down what he did in the war," Bartow said.

The gift of the letters has allowed Bartow to discover her family's tale. She details the story in "To Elinor - A Romance in Two Voices." She self-published the book through iUniverse for family members and other interested readers. It can be found on Amazon.com and barnesandnoble.com

Bartow encourages others to discover their families' wartime stories and share them on her blog.

"I want people to write but I really want them to talk because we never did and I wish I had asked my dad about the war," she said. "He might have stayed closed, but I wish I had offered him the opportunity to talk."

She said the stories might leave later generations with "a better understanding of just what our men and women went through in those years.

"Getting conversations started and stories written would be a great way to memorialize the actions of 'The Greatest Generation,' " Bartow said.

Take the next step

A man was arrested in a hit-and-run that left a 52-year-old pedestrian dead Friday morning in the Tucson area.

Coronavirus cases in Arizona, mapped by county: May 18

The counselor, who resigned last week, was arrested Wednesday and booked into jail, Tucson police say.

She is charged with three felonies, accused of assaulting her child's teacher and injuring a juvenile at a Tucson charter school.

Jane Beaton Bartow's hands rest among some of the keepsakes from her father at her home in Oro Valley. Included are World War II ration coupons and photos of her father and mother, Darrow and Elinor Beaton. Bartow has written a book based on the letters.

Darrow "Beat" Beaton poured out his feelings to Elinor Landgrebe Beaton in hundreds of letters. They were married June 14, 1944.

Elinor Landgrebe Beaton was the recipient of hundreds of letters from Darrow Beaton during WWII.

Jane Beaton Bartow pores over a stack of WWII-era letters and correspondence from her father to her mother. Bartow has written a book based on the letters, which tell the story of her father courting her mother by mail during World War II.

Some of the letters Darrow wrote were handwritten while others used the Mackay radio (below).

Detail of a letter written during WWII by Darrow Beaton to his future wife, Elinor, while he worked the radio.

Darrow Beaton devised this secret code so that he could let his love know where he was when he wrote her.