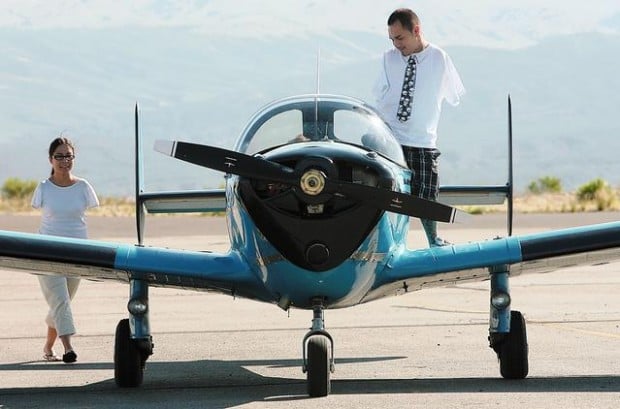 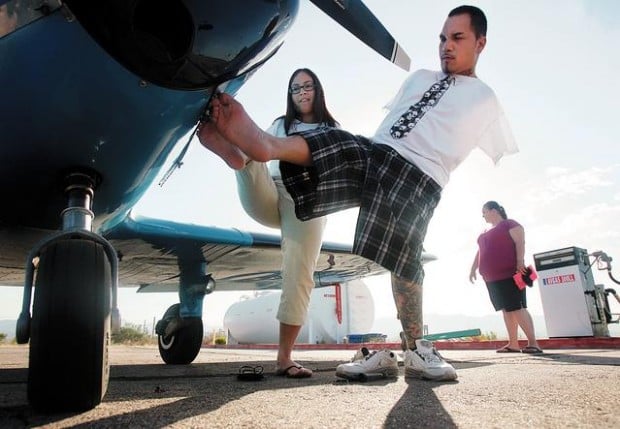 Tucsonan Jessica Cox, who was born without arms, made headlines recently when she obtained a license to fly a plane with her feet.

Now Cox, 26, has inspired another armless Tucsonan to do the same.

Like Cox, 21-year-old Brian Tagalog was inexplicably born without arms and spent his early years feeling encumbered by prosthetics. He eventually shed them altogether in favor of using his feet.

The former Sunnyside High School student now earns money as a tattoo artist. His fiancee, Kimberlye Cress, can proudly show off one of Tagalog's designs on her right shoulder blade — a turtle. He created it using only his feet. He draws the design with his right foot and puts it on tracing paper onto the recipient's skin, using his foot to stretch out the skin. His feet guide the tattoo gun.

Tagalog flew with Cox's flying instructor out of the Ray Blair Airport in San Manuel last week and is looking forward to some sessions with Cox, whose next goal is getting her pilot instructor's license. They were scheduled to take a flight together today.

Like Cox, Tagalog drives with his feet, though his car has an added difficulty, since it is a stick shift.

"I use my shoulder to shift," he said last week as he sat in Swenson's eating ice cream sundaes with Cox, Cress and his 4-year-old son, Malikiah. Tagalog and Cress also have a daughter, 2-year-old Alexia.

When Tagalog saw a newspaper article about Cox earning her pilot's license earlier this year, he began thinking about flying a plane, too. He found a YouTube video of her flying and watched it over and over.

Around that same time, Cox ran into Tagalog's mother at Rocco's Little Chicago Pizzeria in Midtown, where Angie Tagalog works.

The two had met before, years ago when Angie Tagalog recognized Cox from media coverage at Tucson International Airport. Cox, who was 17 at the time, invited Angie and Brian to her high school graduation party.

"We went and they ended up both eating pizza with their feet," Angie Tagalog said. "We had a blast. Then we didn't see her for a long time. When I saw her come into Rocco's, she came running around to the counter."

Like she did the first time she met Cox, Angie Tagalog got choked up. She's always felt especially protective of Brian, the youngest of her six children.

"The day I gave birth to him, well, I freaked out. The first year I would cry almost every day. I still do every now and then," she said.

"But we never hid him. He wore a tank top when he was a newborn. I didn't shield him in any way."

Brian Tagalog is more introverted than Cox, evident by the way they approached eating their sundaes. While Cox picked up a spoon with her right foot and began eating with gusto, Tagalog was more hesitant and chose to just lick the ice cream from the top, or have Cress spoon it into his mouth. When the ice cream melted a little, he asked for a straw and sipped the rest of it.

"He uses his feet more when we're at home. When we're out he's not as comfortable," Cress explained.

She added that Tagalog holds their children with his feet and has changed hundreds of diapers with his feet, too.

The two say they've learned maneuvering tactics from one another. Cox, for example, takes photos with her feet while Tagalog uses his chin and shoulder.

"We can help each other out," Cox said. "He was grabbing the yoke (the plane's steering wheel) a different way from me. Women have different hips from men, so he does more shoulder movements. I'm more flexible."

Cox is also more accustomed to public attention. She's got her own company, Jessica Cox Motivational Services, which has an aim of inspiring others to overcome obstacles.

Though she'd had a slowdown as the economy slumped, things have recently picked up. Cox spoke at an international business meeting in Kuala Lumpur in March. She'll go to Athens, Greece, for a disability festival this month.

In July she's scheduled to give six talks at the Experimental Aircraft Association's 2009 AirVenture Oshkosh in Wisconsin. The event attracts pilots from all over the world — past attendees have included actors and aviation enthusiasts Harrison Ford and John Travolta. Cox plans on flying herself to Oshkosh in her rented 1946 Ercoupe 415C airplane, along with instructor Parrish Traweek.

After Oshkosh, Cox's goal will be to obtain a pilot instructor's license, with Tagalog as her first student success story.

Angie Tagalog said she and her husband, Tilden, are thrilled that Brian wants to fly a plane.

"We want to support him in whatever he chooses to do. He's our special angel, and we are blessed."

• More information about Jessica Cox is available on her Web site: www.rightfooted.com/

• Read an Arizona Daily Star story about Jessica Cox getting her pilot's license at www.azstarnet.com/dailystar/280301

For Star subscribers: After what looks to be a surprise GOP primary win, Democrats think they have a chance to win the state Senate seat in Legislative District 17.

For Star subscribers: A jaguar known as El Jefe last photographed in the Santa Rita Mountains southeast of Tucson in 2015, is the same cat photographed in November in Sonora, conservation groups say.

For Star subscribers: Use our interactive map to see how much rain Tucson’s monsoon has dropped — so far — near you.

Here's why your recycling sometimes ends up at a Tucson landfill

After a Tucson-area resident shared on the Nextdoor app that she heard that the company that picks up her recycling takes it to the landfill, …

For Star subscribers: With 1 million square feet of office space available in Tucson that was not vacant pre-pandemic, a new approach is needed to get employees to return.

Laura Conover announced she will not remove the conviction of Louis Taylor, who served 42 years in prison after being convicted of starting the fire that killed 29 people in 1970.

Front wall, sign from Golden Pin Lanes, will be featured in new service center, scheduled to open on Tucson's northwest side in 2024.

For Star subscribers: Environmental groups' report blasts U.S. for failing to deal with risks to Glen Canyon Dam's ability to deliver water to Colorado River states including Arizona when Lake Powell is at low elevations.

Does our galaxy have a taste and smell?

Does our galaxy have a taste and smell?