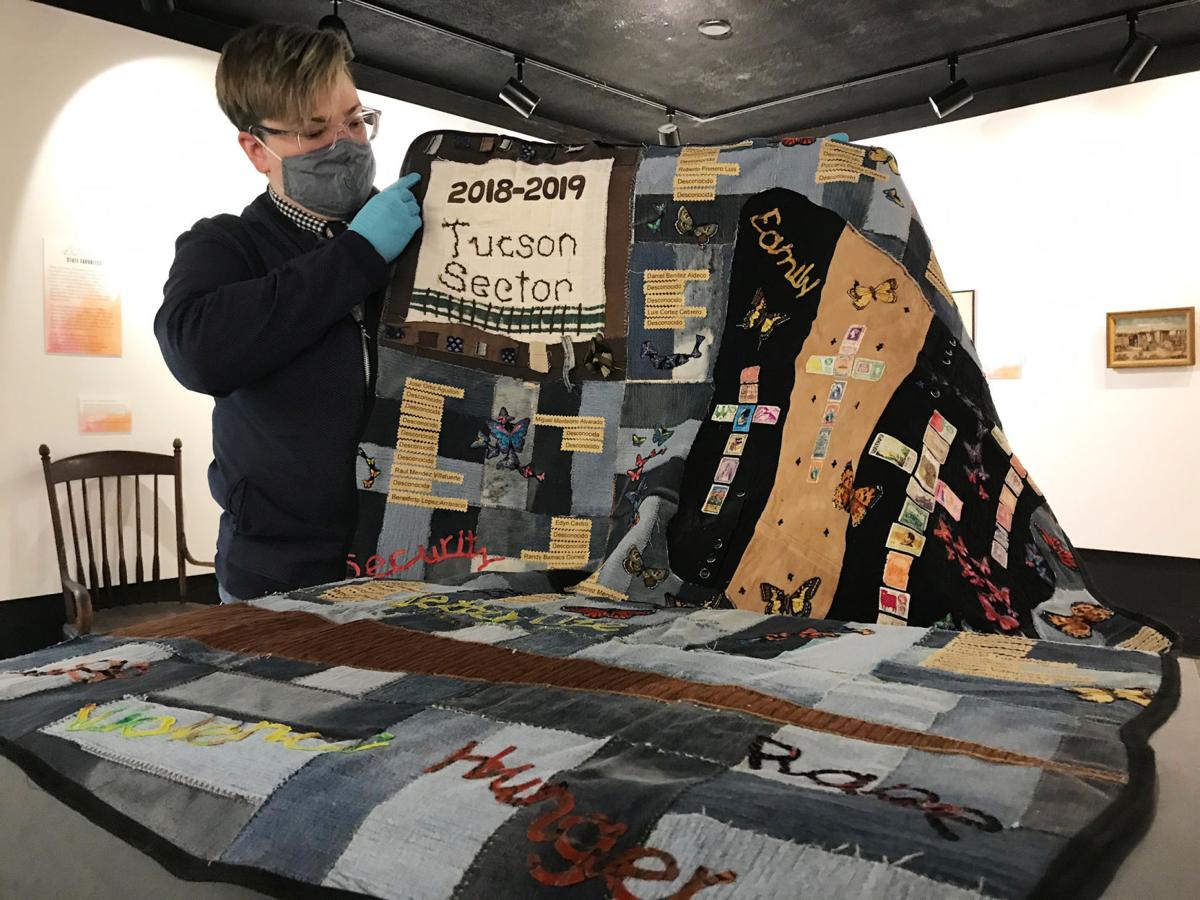 Trish Norman, state museum collections manager for the Arizona Historical Society, unfolds a quilt from the Migrant Quilt Project at the state museum in Tucson. 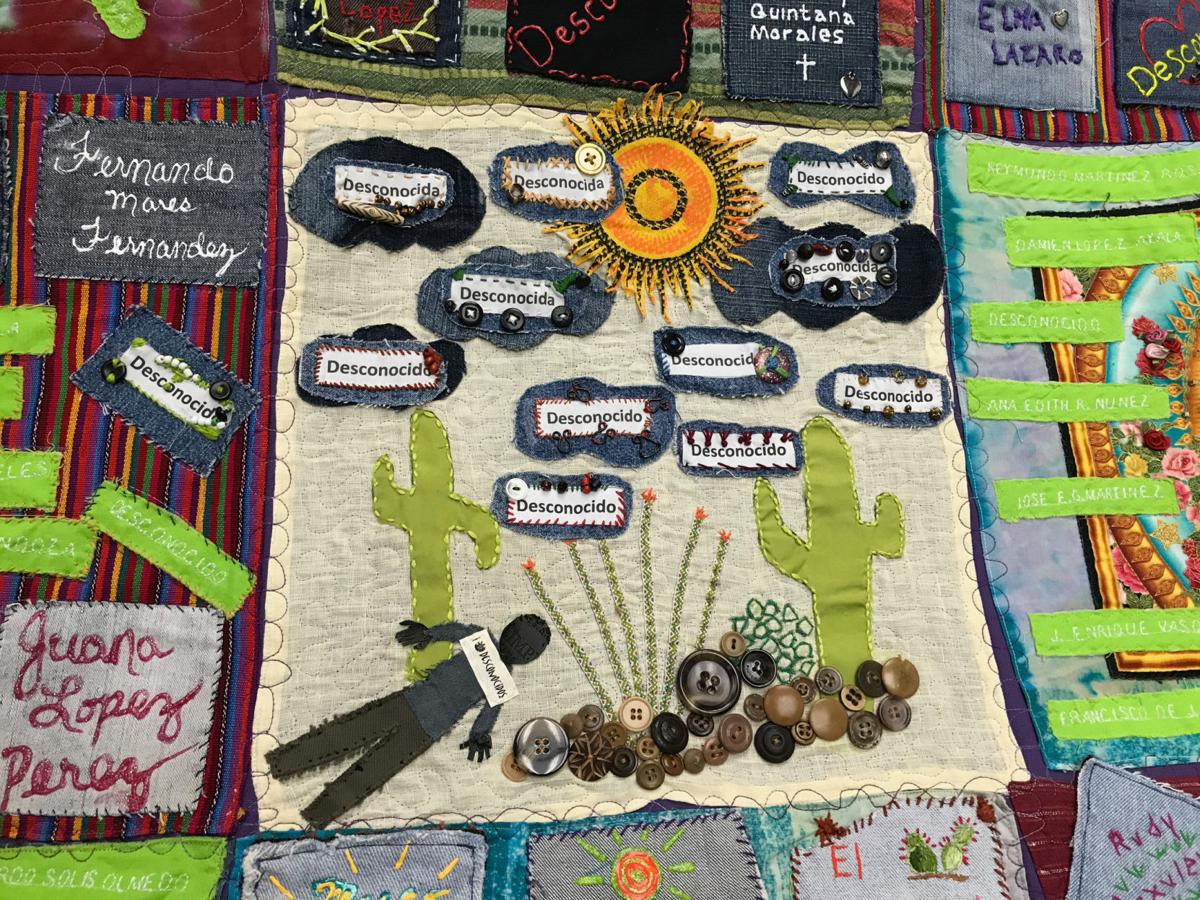 The names of the dead are included on the quilts whenever possible, but a large percentage of the bodies recovered from the desert are not identified. They are listed as “desconocido” or unknown. 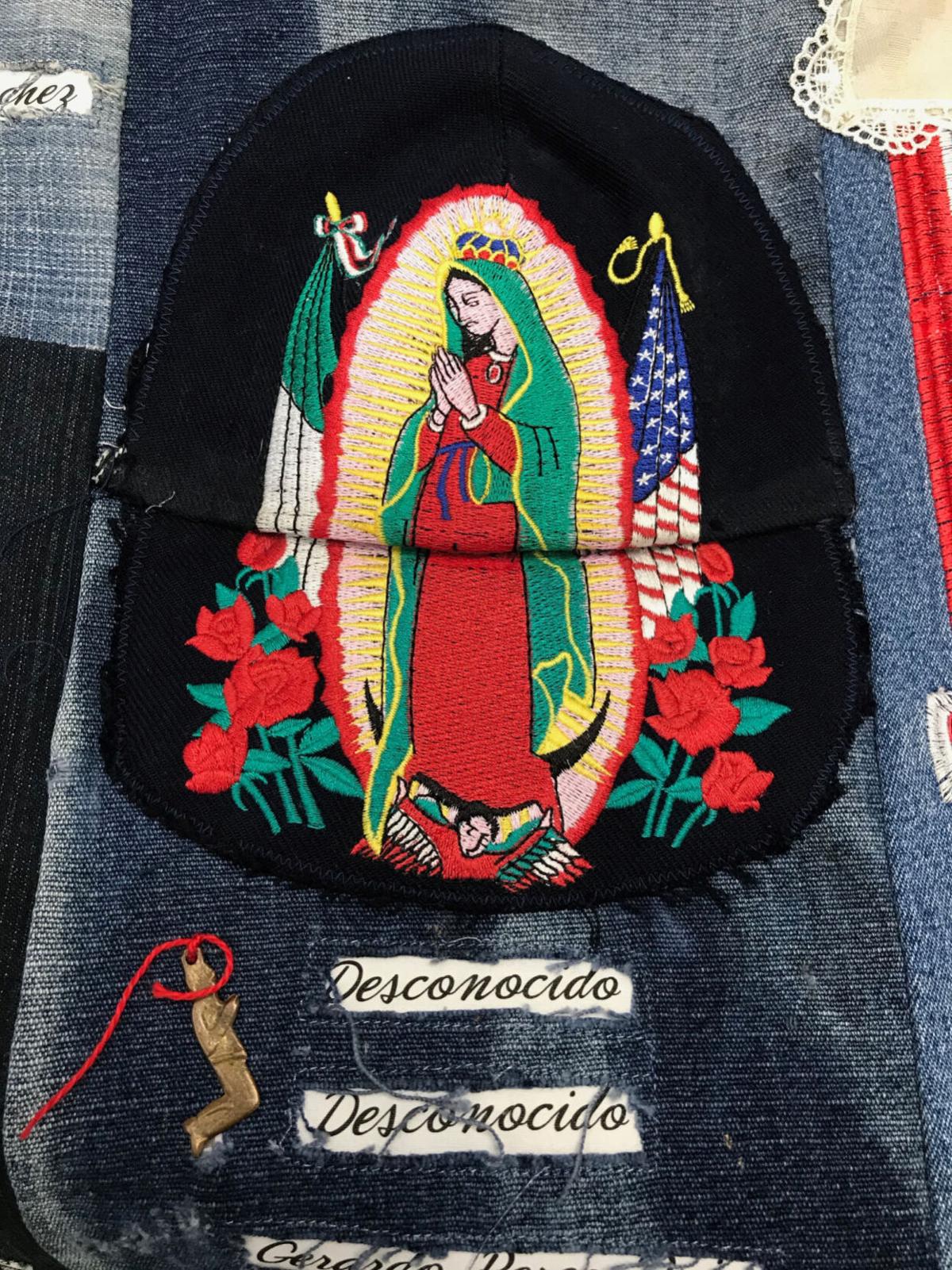 Artists talk of being haunted by certain names and details, horrified by the human toll and honored to play a part in remembering the dead. 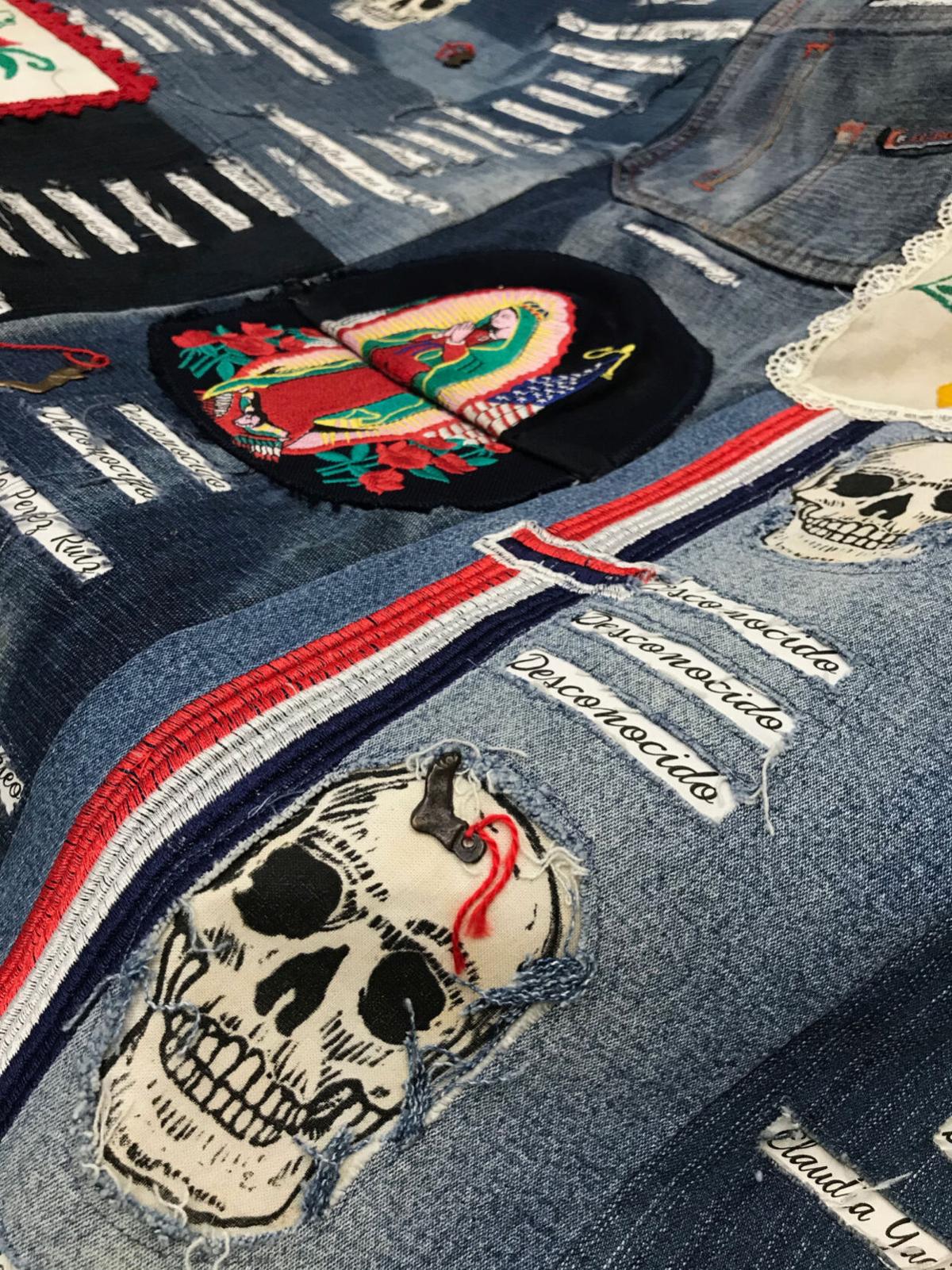 The quilts incorporate fabric from discarded clothing found near the border along migrant trails in Southern Arizona.

Discarded jeans cut into the shape of footprints. Embroidered blessings on handkerchiefs faded from use and the desert sun. Plastic buttons and metal rivets that punctuate long lists of the dead.

Since 2007, a group of artists has stitched together scraps of abandoned clothes found along Arizona’s migrant trails, creating intricate quilts to remember those who have died on the long journey to a better life.

Now the work of the Migrant Quilt Project will be preserved as part of the collection at the Arizona History Museum in Tucson.

“These quilts help connect people through the power of Arizona’s history, even when that history is difficult to hear,” said Trish Norman, statewide museum collections manager for the Arizona Historical Society. “They tell a very important — albeit very sad and tragic — story of Arizona.”

Border relief volunteer Jody Ipsen launched the Migrant Quilt Project in 2007 after a monthlong fact-finding trip through Mexico and Central America, where she interviewed people whose loved ones died or disappeared trying to cross into the U.S.

“These people were being deeply grieved over by their families in all these little hamlets,” Ipsen recalled. “I wanted to memorialize them somehow.”

She said the idea was inspired by the AIDS quilts of the 1980s and her own work with humanitarian aid groups and desert clean-up crews that would collect discarded clothes and other personal effects left by migrants.

The project has produced 20 quilts so far, one for each year since the Pima County Office of the Medical Examiner began tracking a surge in migrant deaths.

During that time, the remains of about 3,400 migrants were found in Southern Arizona, according to records compiled by the medical examiner and the Tucson-based humanitarian group Humane Borders.

About 1,300 of those migrants have not been identified. An unknown number of migrants have died in the desert, but their bodies were never found.

The quilts are the work of more than 50 artists, with assistance from various school, church and charitable groups.

Peggy Hazard curated the project and helped make two of the creations.

In their “quiltmakers’ statements” on the project’s website, the artists talk of being haunted by certain names and details, horrified by the overwhelming human toll, and honored to play a part in remembering the dead.

Each quilt memorializes the migrants whose bodies were found during a single federal fiscal year.

Those who have not been identified are listed as “desconocido” or unknown.

The finished works differ in tone and scale. Some are tender tributes. Others are grisly reminders of where and how people died.

Ipsen said all of the quilts are designed to restore the humanity of once-living people whose journeys reduced them to bones or to a number on some grim government report.

Near the bottom of the 2015-16 quilt is a denim pocket with 400 pesos poking out — money that quilter Mary Vaneecke said she found hidden in the hems of several pairs of jeans that were collected from the desert.

The 2002-03 quilt features a map of Arizona made from multicolored squares of denim. A tiny x marks each spot where a body was found — 205 in all.

The 2007-08 quilt includes a photograph of Josseline Quinteros, a 14-year-old girl from El Salvador whose life and death were chronicled in Tucson author Margaret Regan’s book, “The Death of Josseline.”

On the quilt for 2018-2019, postage stamps from the migrants’ home countries are arranged in the shape of crosses.

On the quilt for 2009-10, the names of the dead are written on the white stripes of an American flag, its field of stars transformed into a dark night sky on an empty desert highway.

Project’s message to be preserved, shared

Norman said the historical society is honored to be the caretakers of such important work. “It’s a really powerful collection, and I’m lucky I get to take care of it.”

The acquisition was announced on Jan. 26, though the quilts were taken in several months ago by the museum on Second Street and Park Avenue, just west of the University of Arizona campus.

According to Norman, these are the first contemporary works to join the historical society’s expansive textile collection, which includes upwards of 200 quilts dating back to the early 1800s.

Ipsen said she is grateful to have the collection safely in the care of the historical society but still available to be loaned out for display at other museums, churches and public buildings around the country.

The 2000-01 quilt was recently featured at the Toledo Museum of Art in Ohio as part of an exhibition on quilting for social change.

The 2019-20 quilt, by renowned textile artist Susan Hoffman, is slated for exhibit at the Museum of Fine Arts in Boston and might not make its way back to Tucson until next year, Norman said.

“The beauty of this project is it can travel,” Ipsen said, which helps spread the word about the ongoing humanitarian crisis along the border.

The historical society also plans to put some of the migrant quilts on display, both in Tucson and at the Arizona Heritage Center in Tempe, where an exhibit on social justice is in the works, Norman said.

“It is our hope that through exhibits and loans to other institutions, we can not only remember those who lost their lives, but continue the important dialogue in regards to immigration policy and the dangers of crossing the border,” she said.

Each new migrant quilt that is made will also be added to the historical society collection.

Tragically, Ipsen said, she sees no end in sight for the project. The remains of 227 migrants were found in 2020, more than any other year.

“We honor the loss of life in the desert,” she said. “We’ll continue to make quilts as long as people continue to die.”

Artisans Beyond Borders is a Tucson-based project that connects asylum seekers in Nogales, Sonora with supplies to create embroidered mantas. Tucson volunteers then sell the pieces on Etsy and pay the artisans for their work.

Trish Norman, state museum collections manager for the Arizona Historical Society, unfolds a quilt from the Migrant Quilt Project at the state museum in Tucson.

The names of the dead are included on the quilts whenever possible, but a large percentage of the bodies recovered from the desert are not identified. They are listed as “desconocido” or unknown.

Artists talk of being haunted by certain names and details, horrified by the human toll and honored to play a part in remembering the dead.

The quilts incorporate fabric from discarded clothing found near the border along migrant trails in Southern Arizona.