Opal Vigil suffers from congestive heart failure — living through two heart attacks — and is tethered most of the time to a portable oxygen device.

The 67-year-old is a cervical cancer survivor and also has osteoporosis and a fear of falling, especially with one weak leg because of poor circulation. At times, she uses a walker or scooter. Her friendly, caring disposition does not give way to her medical conditions. She greets visitors with a smile and a “Hi, sweetie,” from the front door of her one-bedroom apartment on Tucson’s south side.

Vigil, a retired caregiver, is now on the receiving end of getting help.

She is one of 1,630 seniors who depend on home-delivered meals in Pima County. The total annual meals served by three programs is 301,000 at a cost of more than $2 million a year in government funding, including the Older Americans Act, grants and donations.

A May report by the nonprofit United Health Foundation ranked Arizona 41st out of 50 states in the availability of meal deliveries to homebound elderly residents.

No county rankings were provided, but officials here say homebound seniors, who suffer from medical conditions, are disabled and cannot prepare meals, are taken care of by one of the programs when they request meals. However, local experts say there are an unknown number of elderly residents who likely aren’t being helped. (See box on how to sign up for meal-delivery programs on Page A4.)

In addition to the home-delivered meals, staff and volunteers at Caridad Community Kitchen of the Community Food Bank of Southern Arizona also prepare congregate meals on weekdays that are served to the elderly at 13 municipal and county recreation centers. This Pima Council on Aging program, Pima Meals On Wheels, which includes city and United Way funding, feeds 1,900 seniors a year. The number of meals served annually is 86,000; the program’s budget is $827,000.

Meals are a “godsend”

The two other community-based nonprofit organizations that work in collaboration with the Council on Aging to deliver meals to ill, disabled and homebound seniors who cannot cook for themselves are Mobile Meals of Southern Arizona and Interfaith Community Services Mobile Meals. The special-diet meals are prepared at health-care facilities and hospitals.

On Tuesday and Thursday mornings, Vigil is greeted by Steve Wilkins, a driver who delivers her meals that are prepared at the Caridad, or Charity, kitchen. Abby Rosen, general manager and lead chef, works with Catholic Community Services dietician Linda Rumsey to plan the menus.

On a recent visit to Caridad, a staff of seven cooks and volunteers was at work in the large industrial kitchen preparing a ginger glaze to go over chicken, boiling brown basmati rice, sautéing onions with pepper and garlic to mix with bok choy, a Chinese cabbage, and baking a dessert of peach crumble to be served with milk.

“We know that for some elders the meals we prepare are their only healthy meal for the day,” said Rosen, emphasizing that the cooks strive for top flavors and textures that satisfy appetites. “We want the elders to know that the cooks are thinking about them with dignity and respect when they make the meals.”

“I cannot express how Meals on Wheels is a godsend. I call it lunch with Steve,” said Vigil of Wilkins, who visits with her and Mitzy, her dog.

“Opal makes my day every time I go there,” said Wilkins, who has worked as a paid driver for Catholic Community Services for more than two years. “She is an inspiration. She still lets out a big smile with everything she has been through. She can hardly walk, but she still keeps going, just like her little dog.”

Most of the people Wilkins delivers meals to cannot get out to go to the store, nor do they have family nearby who can help.

“They really can’t cook for themselves, and when they do, it won’t be nourishing food,” he said.

He recalled a client who would stand by his front door waiting for his meals.

“He had a difficult time cooking or scrounging meals from neighbors. I believe he was hungry,” he said.

“Our problems pale when we see what these people are going through,” said the driver, who talks to the seniors to make sure they have not fallen or have a situation that needs immediate attention. He has helped some get items off high shelves, open jars or find a misplaced cellphone. He said he has reported some who need their homes cleaned or a broken cooler needing repair, and the Council on Aging has stepped in immediately to resolve the problems.

Twice he has had to call 911. In one instance, Wilkins felt something was not right when one man, in his 70s, did not answer his door. Tucson firefighters found the man dead on the floor. It was believed he suffered a heart attack. On another delivery, he heard a faint cry for help. Firefighters broke into the home and found the man had fallen. He had been on the floor for three hours.

Wilkins realized he usually is the only person some of the meal clients, in their 60s on up to nearly 100, see on delivery days.

When Vigil has good days, she spends short bouts in the kitchen preparing breakfast and dinner. On her bad days, she depends on a caregiver who helps her shower, does laundry and cleans her apartment. She also depends on neighbors to pick up her prescriptions and do her grocery shopping.

She lives on a tight budget, just shy of $800 a month in Social Security disability and $145 in supplemental nutrition assistance. “Sometimes I feel overwhelmed. I pray to the Lord. Then a calmness comes over me,” said Vigil, who receives her medical coverage under the Arizona Health Care Cost Containment System, for people with limited income.

Reaching those who need help

The Pima Council on Aging’s Pima Meals on Wheels has no waiting list for people in need of home-delivered meals, administrators say. The special-diet meals operated by Mobile Meals of Southern Arizona and Interfaith Community Services Mobile Meals combined has up to seven people at times on a waiting list for meals and they need volunteer drivers.

Debra Adams, the Council on Aging’s senior vice president for operations, said it isn’t known how many seniors in Pima County qualify and need home-delivered meals and have not come forward for assistance.

“As a community, we need to be attentive to older people we come in contact with and be aware and help meet their nutritional needs,” Adams said.

Some might not have a home computer to seek services and do not know whom to call, and others may be keeping their financial struggles for food to themselves. Those who have mobility issues may not be preparing nutritious meals, are isolated and are not seeking help.

“We know there are people out there who are not getting their needs met,” said Adams.

“The National Council on Aging cited a 2016 report stating that one in six older adults (ages 60 and older) in the U.S. faces a threat of hunger.

“These findings should concern caregivers and anyone who works with aging issues because food-insecure older adults are at much greater risk of suffering from diabetes, depression, congestive heart failure and asthma than their better-fed contemporaries,”’ Adams said.

For those who receive home-delivered meals, “one meal a day does not cut it” for some of the seniors, said Adina Wingate, a PCOA spokeswoman.

“We need to pay attention to this. This is stark, and it takes all of us together to make a difference.”

For information about who can receive home-delivered meals in Pima County, and how to sign up call:

For information about meals, nutrition services and a list of 13 municipal and county recreational centers that serve congregate meals for seniors through Pima Meals on Wheels, go to www.pcoa.org/services/meals-and-nutrition/

Penguins mail their Christmas letters to Santa at UK zoo

Penguins mail their Christmas letters to Santa at UK zoo

The driver of a pickup truck that crashed Sunday morning appears to have been drinking and driving erratically just before the wreck, Tucson p…

Anthony Gracia was also sentenced to probation in a separate case.

The former teacher made lasting impressions on many young students.

A pilot program is aiding them in feeding their pets and providing other services. 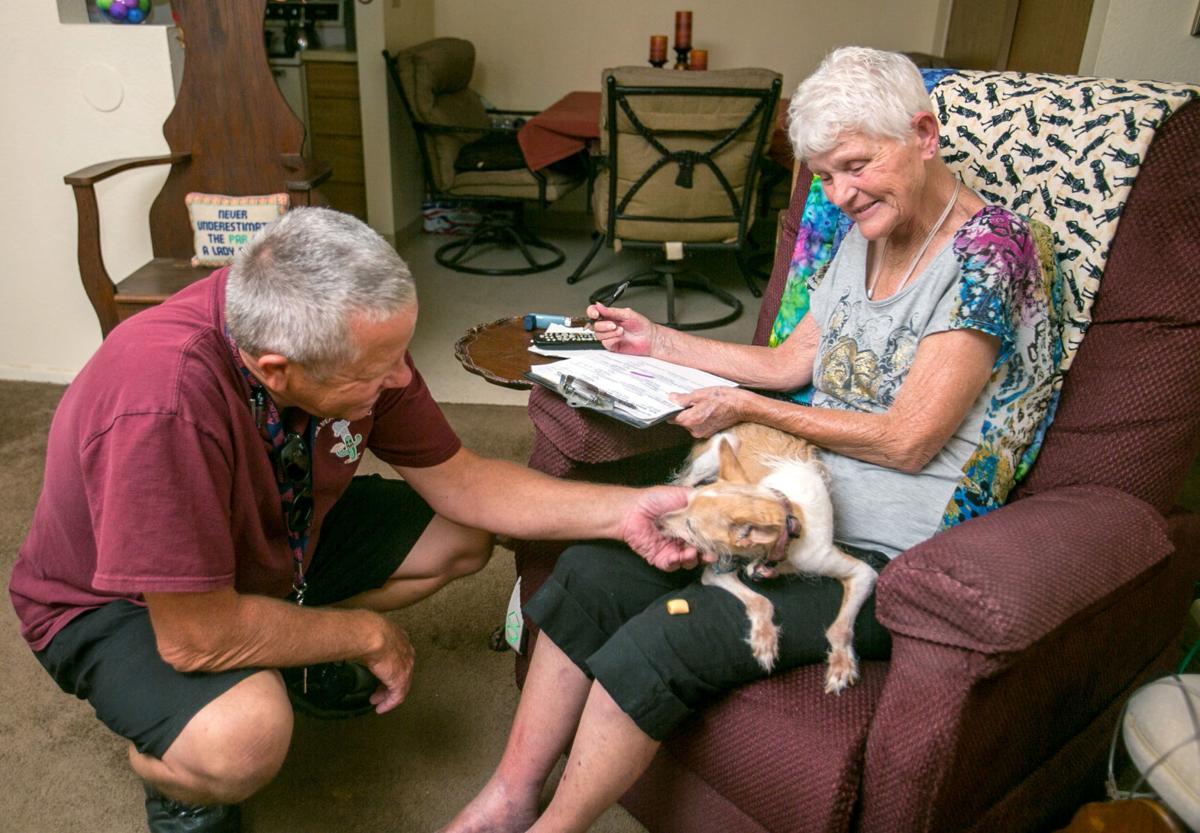 Steve Wilkins visits with Opal Vigil, 67, and her dog, Mitzi, as he delivers Meals on Wheels food to Vigil’s south-side apartment. “Opal makes my day every time I go there,” says Wilkins of Vigil, who “keeps on going” despite medical and mobility issues. 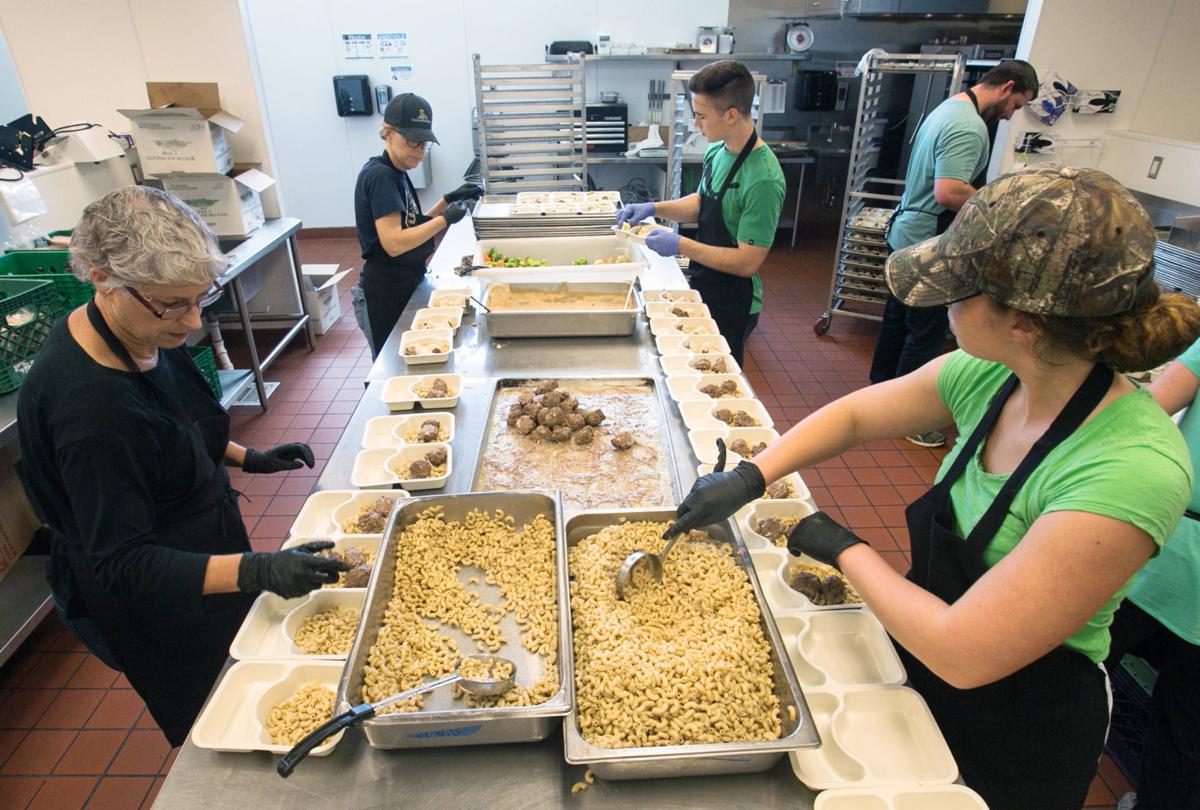 Volunteers at the Caridad Community Kitchen load up trays of food for elders in need. 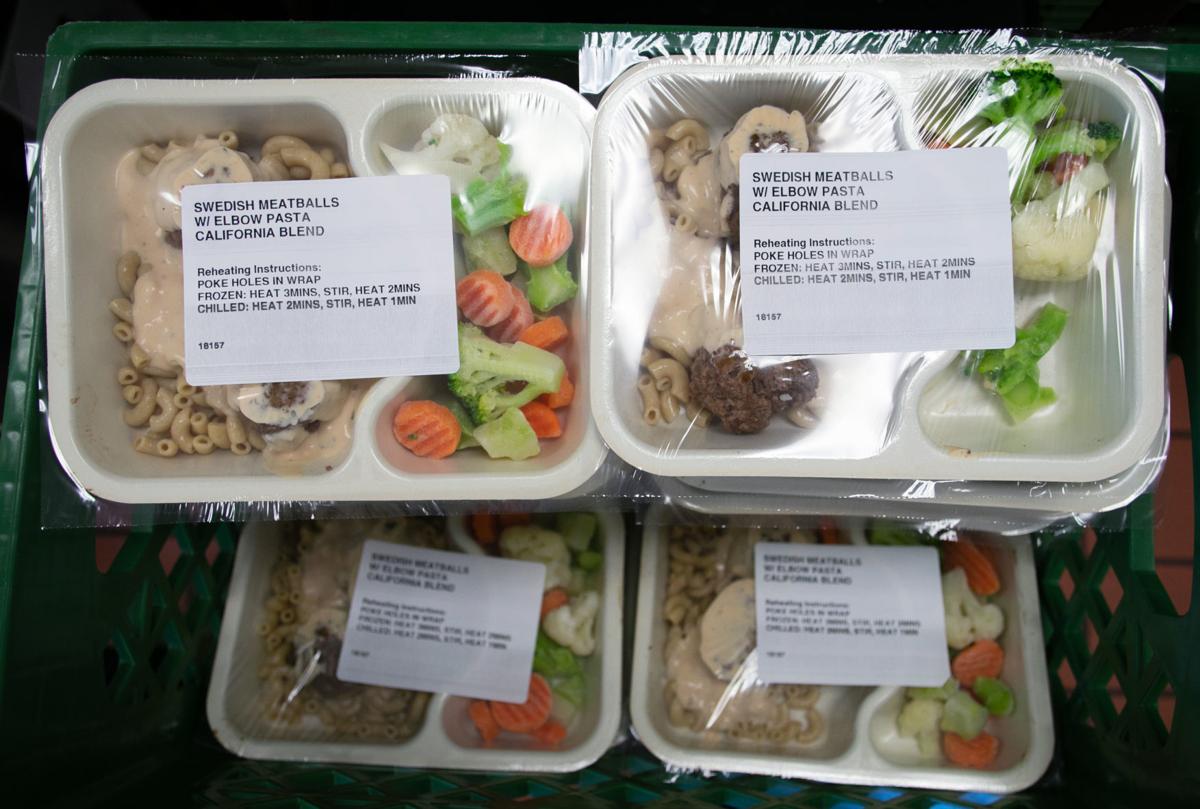 Meals of Swedish meatballs and veggies are ready to be distributed to seniors from Caridad Community Kitchen’s Meals On Wheels program. 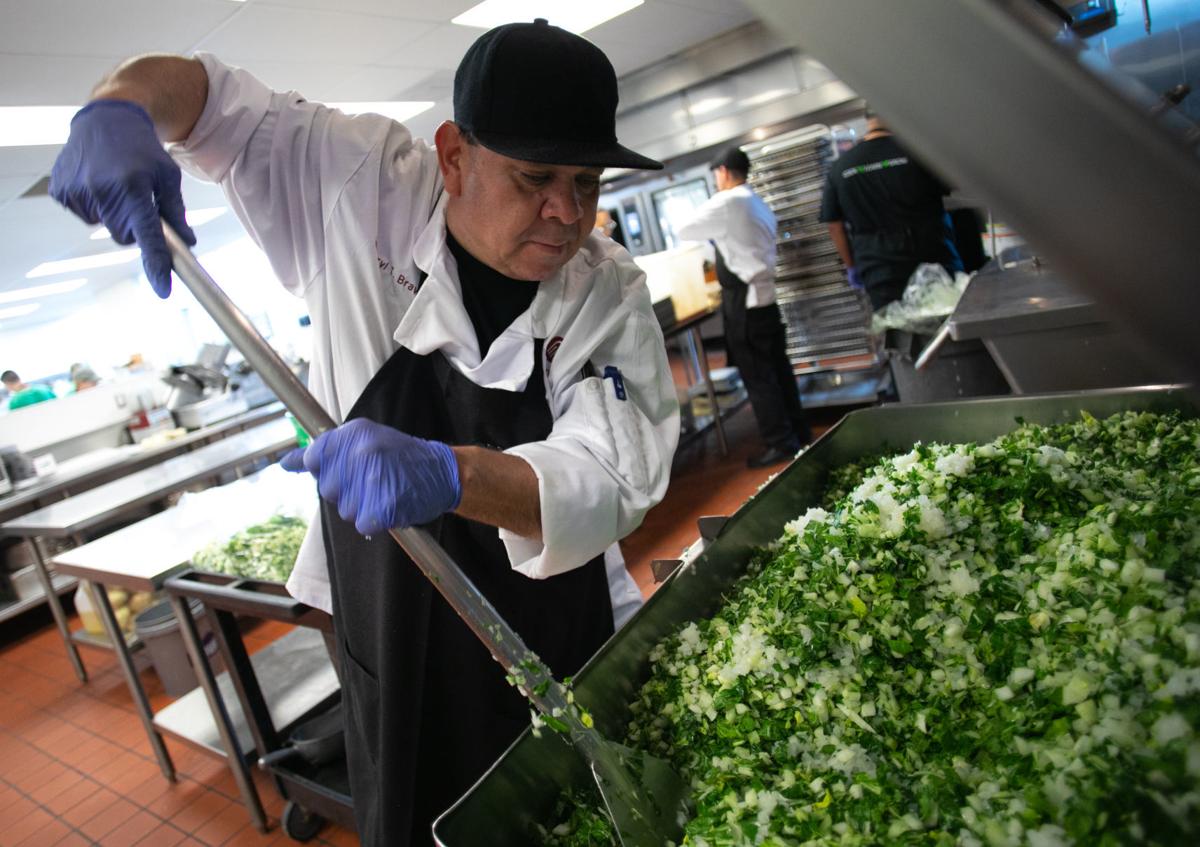 Darrly Bravo stirs bok choy before it is blast-chilled at the Caridad Community Kitchen.