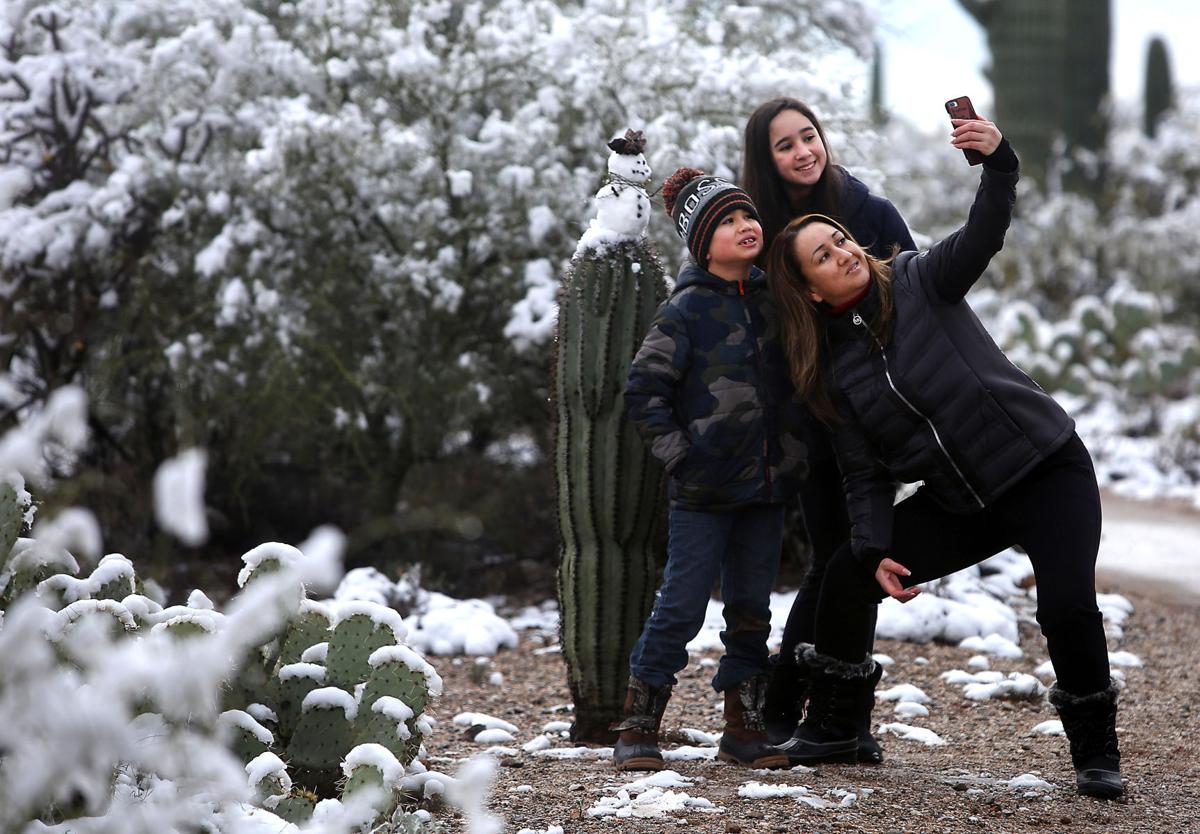 "It's the first time we've seen snow the desert," says Mayra Vasquez who brought Valeria Luzania, 11, and MarcoDario Luzania, 8, to Saguaro National Park East on January 02, 2019. The kids built a snowman and the trio took a selfie with their creation. Parts of the Old Pueblo woke up to snow on New Year's Day, followed by more snow Wednesday morning. 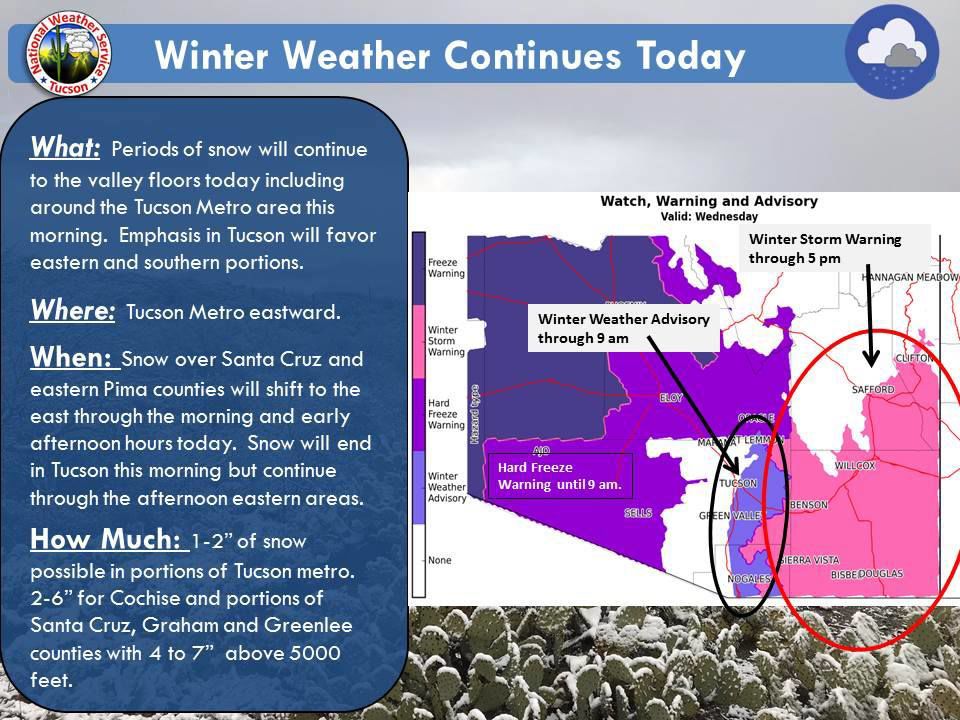 Snow was falling early Wednesday morning in portions of the Tucson metro area as well as across southern Arizona.

The snow was mostly over eastern Pima and Santa Cruz counties. It was moving out of the area in an eastern direction, the National Weather Service in Tucson said early Wednesday.

According to the National Weather Service, the Rita Ranch/Vail area had around 5 inches of snow as of Wednesday at noon. Summerhaven saw 4 inches and Nogales got around 6 inches. Sierra Vista had 3 inches and Green Valley had 1.

Here is an updated map and listing of the snow reports we've received. Please share more reports as the snow continues! #azwx pic.twitter.com/mUfey65S0I

Snow here was expected to end later in the morning, but portions of southeastern Arizona could expect snowfall into the afternoon, the weather service says.

A winter storm warning is in effect to the east of Tucson until 5 p.m.

Fort Huachuca has closed for the day, sighting multiple incidents due to icy roads and snow.

Officials said in a Facebook post that the child care centers on post are closing once parents have picked up their children. Gyms and the clinic are closing as well.

The Army installation in Cochise County will only be open today to emergency responders.

The road to Mount Lemmon is currently closed except to mountain residents and employees.

As well, weather has caused traffic to slow on parts of the Interstate-10 from Vail east to the state line.

Law enforcement officers in Cochise, Santa Cruz, Pima and Greenlee counties are busy this morning dealing with crashes and slide-offs, according to a tweet by the Department of Public Safety.

These images show the snow southeastern Arizona is dealing with this morning. Delay travel. If u decide to travel during a snowstorm, be prepared for delays and the possibility that u will spend extended time in winter conditions due to slowing and closures caused by the weather. pic.twitter.com/LtVUr3kWwe

The roads are slick this morning, so be safe out there! And for updates on Pima County road conditions for Catalina Highway, the road to Mount Lemmon, call 520-547-7510.

Snow on the Catalinas

Snow in east side Tucson

I meant Saguaro of course. pic.twitter.com/3vUnxnqrE6

Snow on the Tucson Mountains

Snow on the Tucson Mountains

Snow on the Catalinas

The way self-proclaimed tax activist Lynne Weaver sees it, anyone who makes it to age 65 should not have to pay property taxes on their homes.

The Arizona Chapter of The Satanic Temple has been lobbying various cities and towns to be among religious groups allowed to give a short speech or prayer prior to public meetings.

Pima County offers alternative to pouring grease down the drain

Ten reasons 2019 could be a banner year for Tucson sports

Improved UA basketball and football teams would go a long ways towards erasing bad taste of 2018.

With temperatures expected to drop into the 20s overnight, Pima Animal Care Center is encouraging pet owners to bring their pets indoors overnight.

Folks with the Game and Fish Department in Tucson recently shared a video of a mountain lion roaming around the Sabino Canyon area.

"It's the first time we've seen snow the desert," says Mayra Vasquez who brought Valeria Luzania, 11, and MarcoDario Luzania, 8, to Saguaro National Park East on January 02, 2019. The kids built a snowman and the trio took a selfie with their creation. Parts of the Old Pueblo woke up to snow on New Year's Day, followed by more snow Wednesday morning.