Terry Goddard is crafting a “right to know” initiative. It would guarantee in the state constitution that voters are entitled to know who is trying to sway their votes on who to elect for everything from statewide offices to school boards. The measure, which Goddard hopes to put to voters a year from now, would also impose the same requirements on those pushing future ballot measures.

Campaign consultant Bob Grossfeld said the effort starts with redefining for voters what he and Goddard are trying to curb, by using new terminology.

“We’re done with this whole ‘dark money’ nonsense,” Grossfeld said, referring to the term that has become synonymous in political rhetoric with dollars coming from unknown sources. He said that’s technically neither a legal term nor one with a formal definition.

“This is no different than criminal syndicates who are laundering money,” Grossfeld said. “It’s for the same purposes: to hide the people behind it.”

Goddard, a Democrat who was elected as attorney general in 2002 and won a second term four years later, formed a campaign committee this past week. That allows him to begin raising money for the task of getting the measure on the 2018 ballot.

Grossfeld said the final language is still being tweaked. But he said the bottom line is designed to expose anyone who puts at least $10,000 into any campaign, whether for public office or a ballot measure.

Arizona law already requires anyone who spends money to influence a campaign to file reports.

But there’s an exception: Groups that are organized under the Internal Revenue Code as “social welfare” organizations contend they are not required to disclose their donors. So the only thing the public knows is that some group, often with a name that may have no link to the sponsors, has dumped cash into a campaign. That has become an increasing problem for voters interested in finding out who is behind commercials, mailers and other campaign materials.

In the 2014 gubernatorial race, for example, the $5 million spent on the general election directly by Republican Doug Ducey and Democrat Fred DuVal was eclipsed by the $9 million others spent trying to influence the race. Most of that cash flowed to Ducey’s benefit.

And two Republicans got elected to the Arizona Corporation Commission with more than $3 million spent by outside groups.

Arizona Public Service, the state’s largest utility, which is regulated by the commission, has refused to confirm or deny whether it was the source of any of that cash.

A related issue goes to what might be called “chain” donations, where Individual A gives money to Organization B which then funnels it to a third organization that does the ultimate spending on the race.

Grossfeld said the language of the initiative would force disclosure of all major sources of funding. He said it is worded in a way to pierce the multistep donations, requiring that the ultimate sources of the dollars be disclosed, not only in reports filed with the Secretary of State’s Office but also in advertising, mailers and other campaign materials.

“It creates a right for citizens, in the constitution,” Grossfeld said. “And that’s a right to know, specifically, the source of campaign funds.”

None of this would help voters when choosing presidential or congressional candidates. Grossfeld said states have no say over federal campaign-finance laws.

This isn’t the first time Goddard has attempted to force public disclosure.

In 2016, he paired with former Phoenix Mayor Paul Johnson, who was pushing his own ballot measure for open primaries. Both efforts collapsed when funding ran out.

The first is that the campaign spending measure against what he calls “dirty money” will stand on its own and not be linked to other ballot issues.

He and Goddard said they believe they can gather the 225,963 valid signatures needed by July 5 to qualify for the ballot solely with volunteers, minimizing the need for up-front cash.

He said they have the backing of members of Save Our Schools Arizona, the group that managed to gather enough signatures to force a referendum on legislation to vastly expand the system of vouchers that allows parents to use public dollars to send their children to private and parochial schools.

Save Our Schools Arizona spokeswoman Dawn Penich-Thacker said her organization has not taken an official position. But she confirmed that key members of the group are working on the issue because they have common interests.

More to the point, they have a common foe, if you will: the Koch brothers.

Americans for Prosperity, a group financed by the billionaires, already is involved in a lawsuit designed to keep the voucher referendum from making the ballot.

Separately, the brothers are financing the Libre Initiative, which is targeting Hispanic households nationwide in an effort to get support for vouchers — and to oppose ballot proposals like Save Our Schools — with what Penich-Thacker contends is misinformation about who benefits from funneling state dollars into private schools.

Under current laws, the only information that voters would get if and when the voucher referendum is on the ballot next year is that the Libre Initiative put a certain number of dollars into defeating it, with no requirement to tell voters which individuals and groups provided financing, and in what amounts.

SolarCity and its favored candidates say the big difference between them and APS is "disclosure."

Group that supports school vouchers has spent $27k on a local legislative race.

Law will go into effect Aug. 6.

New law requires judges to void initiatives not in "strict compliance'' with all election laws.

The jury's verdict is the largest civil verdict reported in Arizona this year.

Wildcats’ comeback comes up short as No. 22 Arizona falls at No. 17 USC

The Cats rally to tie the score in the fourth quarter before the Trojans pull away for a 49-35 victory, snapping the UA’s four-game winning streak.

Star reporter Zack Rosenblatt takes you inside Los Angeles Memorial Coliseum as the Arizona Wildcats lose a Pac-12 South battle to No. 17 USC, 49-35.

Costumes were all the rage in Tucson during Comic-Con.

Driver of the second vehicle was critically injured.

Attorney argues the deal is a setback for Arizonans with disabilities.

A voter advocacy group, union and Democratic lawmakers also seek to void the law that allows some groups to make anonymous political contributions.

Ducey: Too early to talk about any Trump role in re-election campaign

"These political seasons are way too long,'' the governor said of his 2018 re-election effort.

Effort to require public disclosure of original sources of funding has to come up with 226,000 signatures by July to get on ballot.

Foes of universal vouchers told a judge Friday she cannot consider a challenge brought by those who want to keep voters from getting the last word.

Measure now goes to the Senate.

Various groups with environmental interests had urged Ducey to veto the bill, but the governor's office said it would raise energy prices.

Arizona cities lose their right to demand that nonprofit groups divulge who is financing their efforts to sway local elections.

Whether Arizonans will get to vote on outlawing "dark money'' is headed to courts.

Backers of a ban on "dark money'' are further from their goal of getting the measure on the November ballot.

Using volunteers this time to collect signatures after court threw out some petitions in previous attempt. 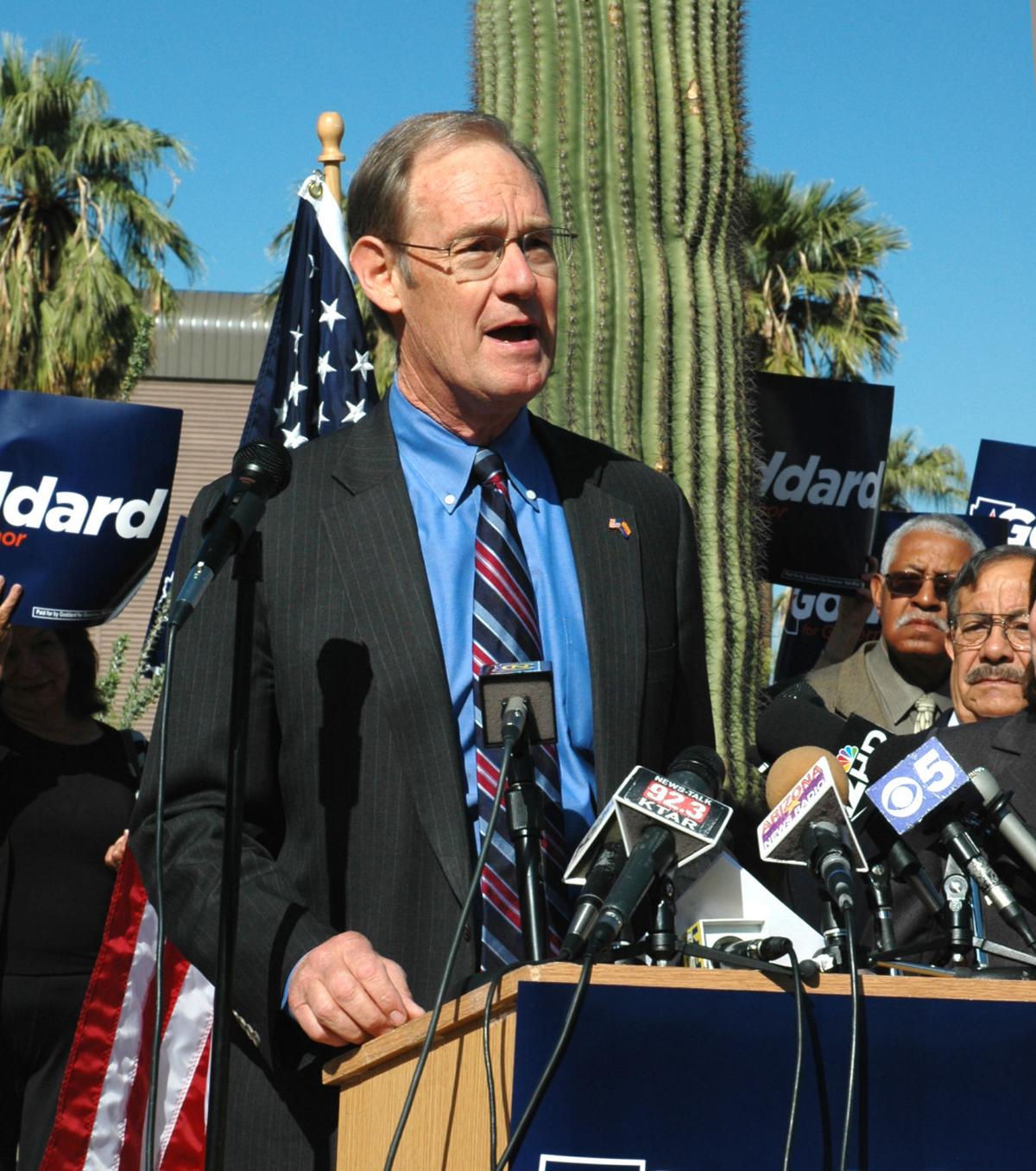 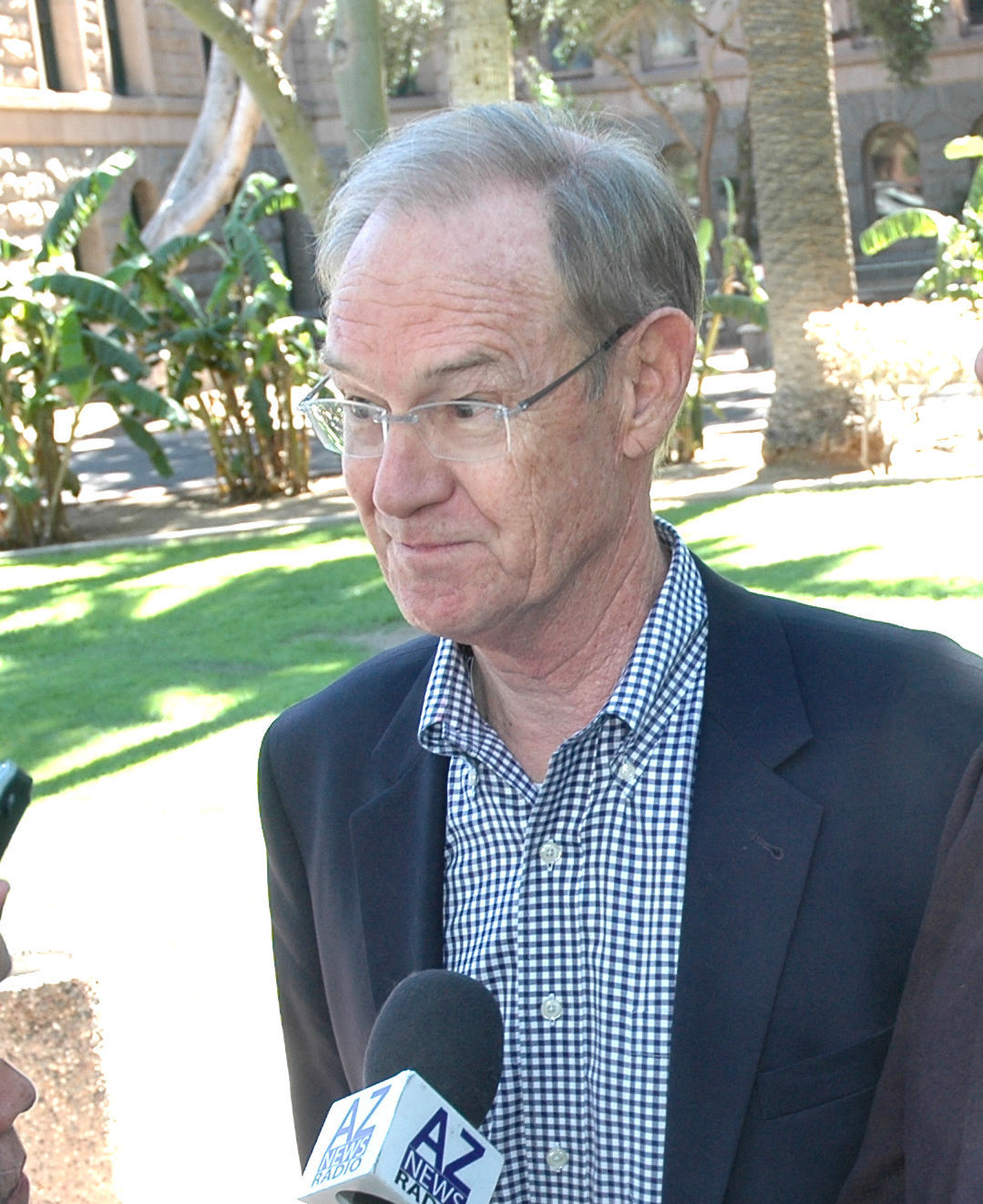