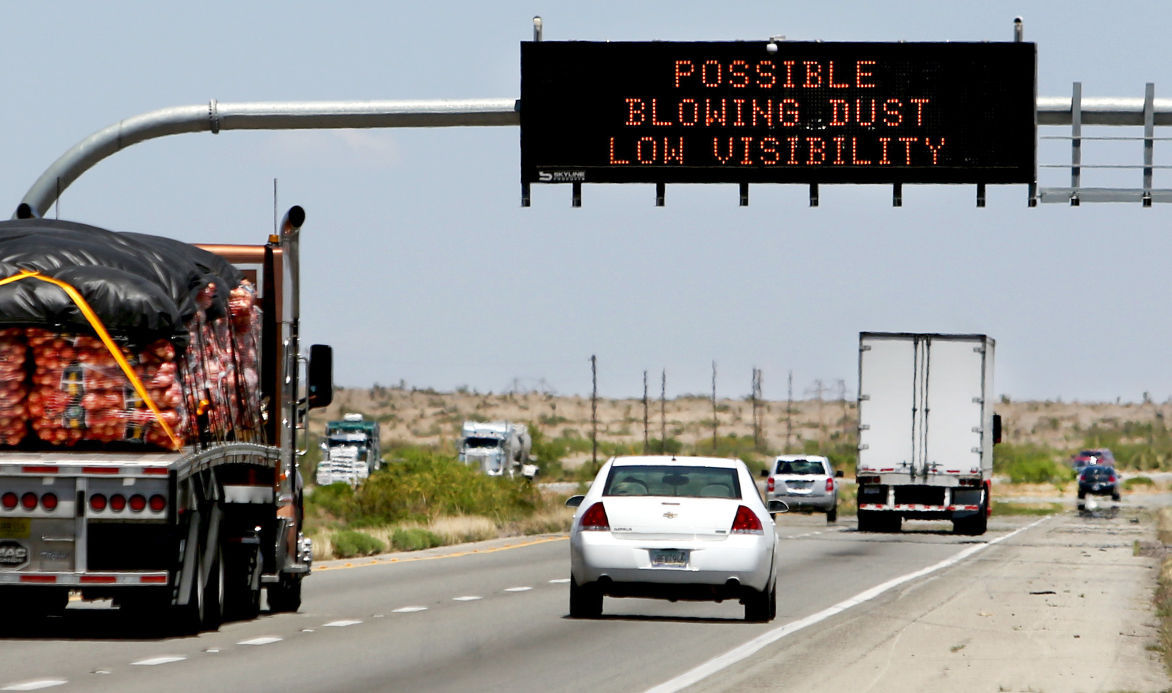 An ADOT sign warned eastbound drivers near Willcox on Wednesday. The region east of Willcox to the New Mexico border is just one of Arizona’s dust-storm trouble spots. 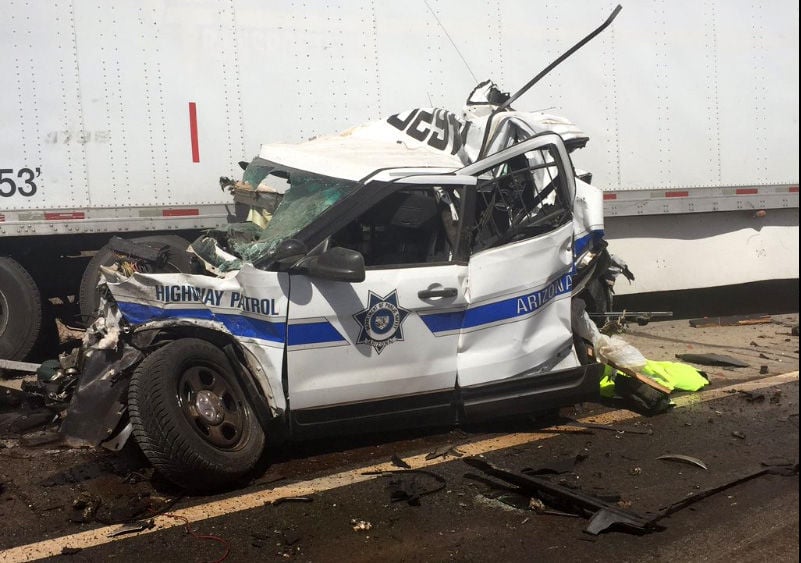 The DPS trooper was not in his car during the dust storm that caused chaos in Cochise County on April 28. 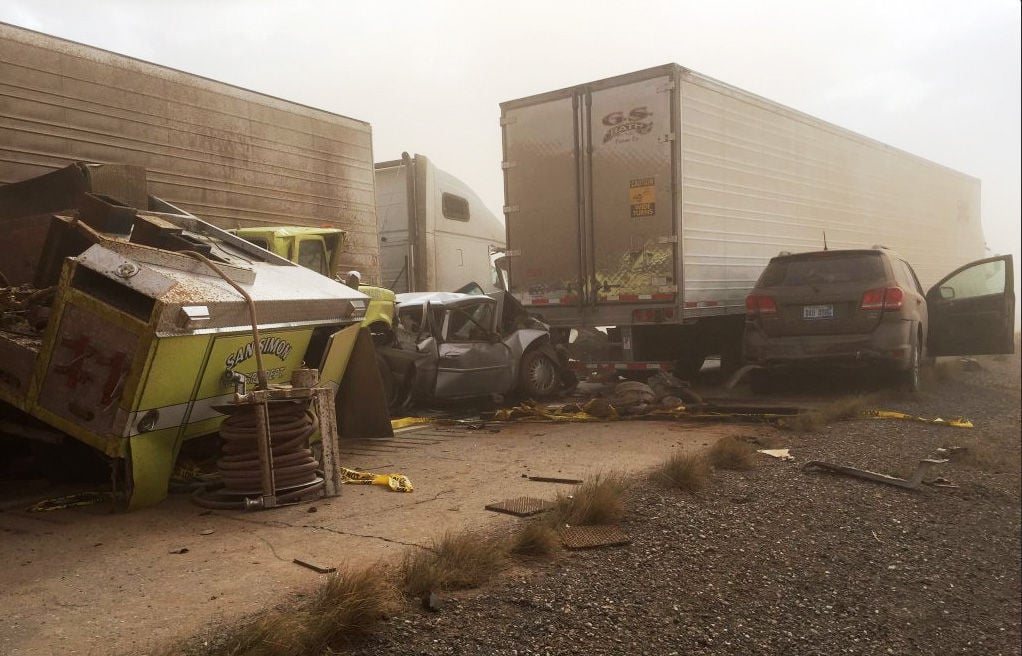 A San Simon rescue truck and a Department of Public Safety patrol car were destroyed in a dust storm on April 28. 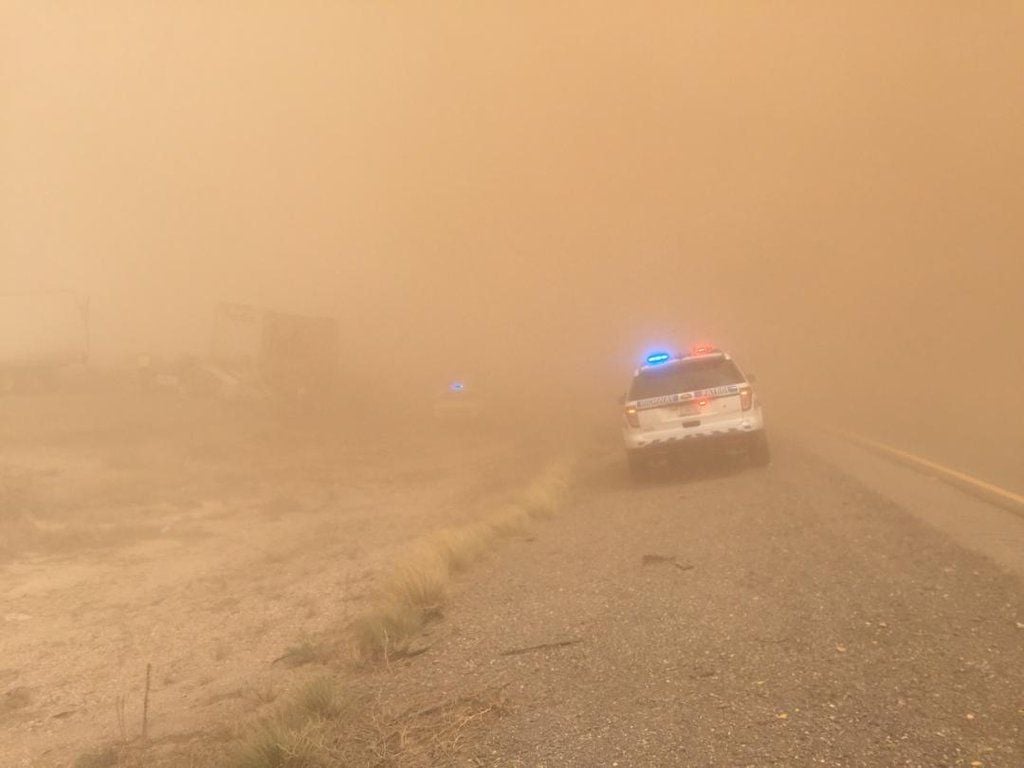 Dust storms on April 25 and April 28 along Interstate 10 near U.S. 191 in Cochise County forced closures of the interstate. 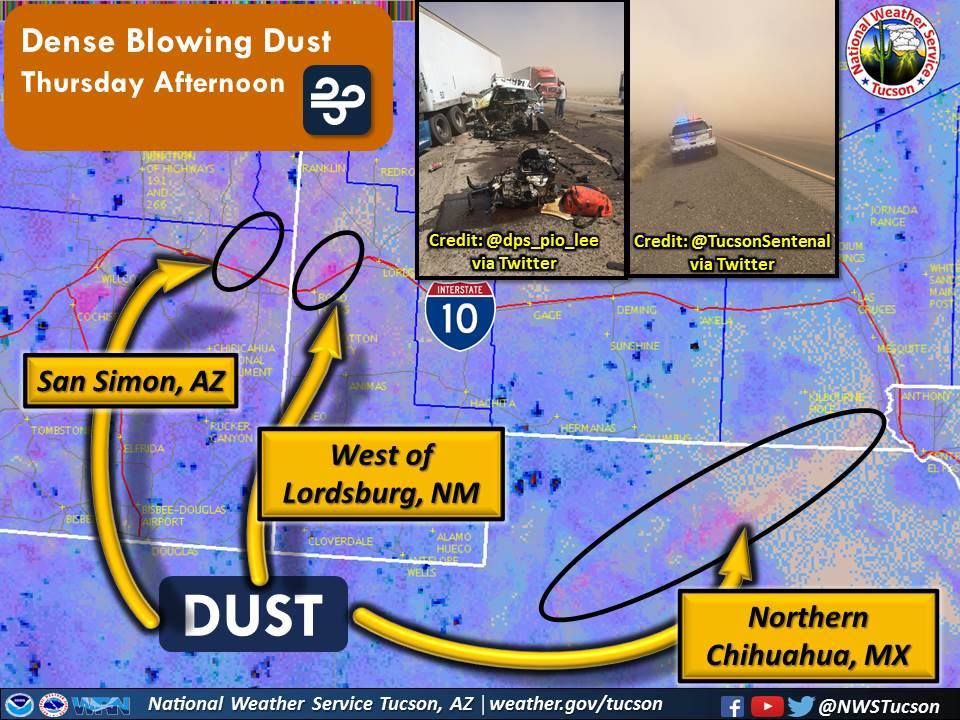 Graphic of wind tracks and dust concentrations on April 28. 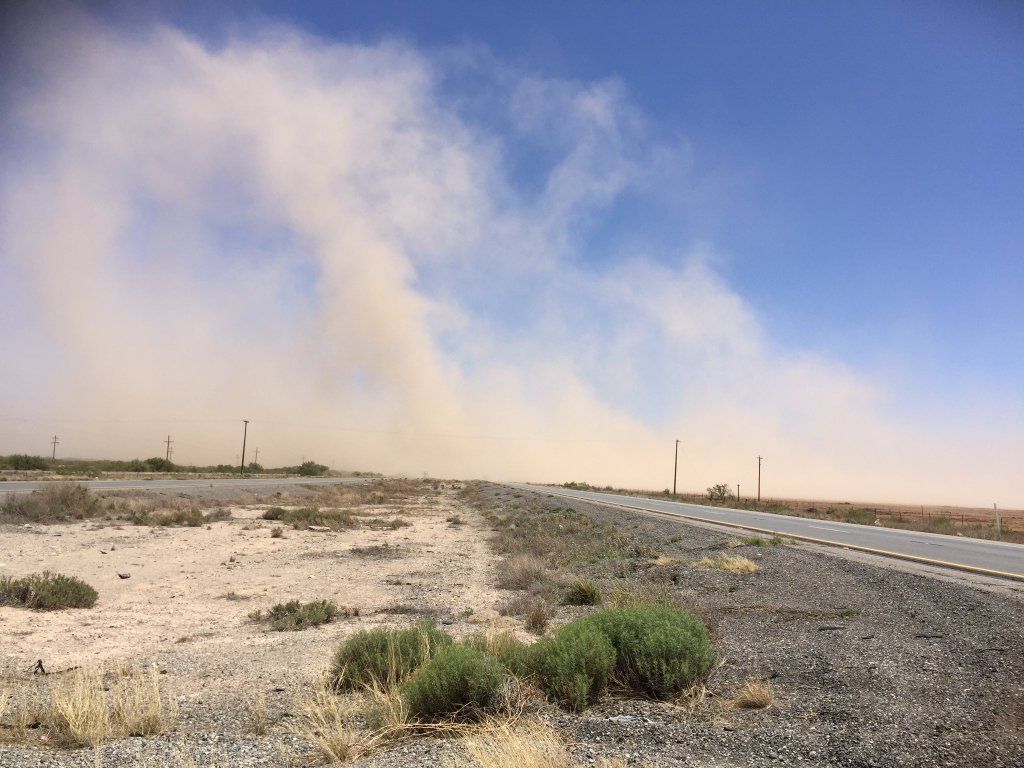 Dust storms on Interstate 10 near U.S. 191 on April 25 and April 28 in Cochise County forced closures of the interstate. A San Simon rescue truck and a DPS patrol car were destroyed in the storm on April 28.

A Cochise County farm has begun watering a 160-acre patch of cleared land along Interstate 10, after a month of dust-caused crashes and closures of the highway near the New Mexico state line.

The measures came too late to avoid closures of I-10 Thursday afternoon and again Friday morning, when blowing dust began to cut visibility around Milepost 376, midway between San Simon and Bowie.

The highway has been closed six times for crashes or as a precaution since April 7, forcing motorists on a 110-mile detour to Safford on U.S. 191 and back to Lordsburg, New Mexico, on U.S. 70.

The department has the “authority to take enforcement actions” against landowners who create dust hazards, he said, but prefers to solve problems with voluntary measures.

The land near San Simon was bought by David Turner International Residential LLC in March 2014, according to the Cochise County Assessor’s Office.

That LLC is now named David’s Agrigold Farm LLC, according to a name change registered with the Arizona Corporation Commission in July 2014.

David Turner International is also the name of a faith-healing ministry run by Turner from the same Phoenix and Scottsdale addresses as the land company.

The Star called and sent emails to Turner, a woman listed as his controller and the law firm that was copied on a letter Turner sent to state water officials. No one responded.

Franquist described Turner as “a new farmer” who wasn’t aware of the hazard being created when he cleared fields close to the interstate.

University of Arizona meteorologist Mike Leuthold, who drives by the Turner property frequently to a home he owns near the Chiricahua Mountains, said the land was cleared in late fall or early winter.

Leuthold said he saw dust blowing across the highway this past winter in fairly mild winds.

Farmer Mark Cook, who has orchards along I-10 near San Simon, said he began avoiding the site in the afternoons when the windy season arrived.

Cook said any disturbed desert will blow dust, but most farmers in the area are careful about clearing land in the windiest time of year.

“Any local would understand that there are just times of the year when it blows like it does now, and you’d do anything you can do to keep it from being a problem.”

Cook, who farms about 6,000 acres of pistachios and pecans in the San Simon area, said any agricultural land can create blowing dust in high winds, but mature orchards are not usually a problem.

Nothing has been planted on the Turner land. In a July letter to state water officials, Turner said he owned 2,400 acres in the area and was “engaged in an effort to bring the land into cultivation, including drilling wells, purchasing trees and developing an irrigation plan.”

Caroline Oppleman, spokeswoman for the ADEQ, said Turner has a well on land adjoining the cleared plot that is being used to fill the five tanker trucks that began watering operations Thursday night.

“We urged the owner to proceed with planting crops or establishing other vegetative cover (including irrigation) for this area as soon as practicable, which would provide additional dust control,” Oppleman wrote in an email.

Last month, it became clear to the Arizona Department of Public Safety and ADOT that emergency measures were needed to address windblown dust from Turner’s land, which caused accidents on April 7, April 25 and April 29.

Nobody was killed, but 19 vehicles were damaged, several motorists were injured, and a DPS cruiser was crushed beneath a semi-truck.

A truck driver who was critically injured in the April 25 crash is still hospitalized but improving, said Trooper Kameron Lee, a DPS spokesman.

ADOT reduced the speed limit along that stretch of highway to 45 mph — then raised it to 65 mph during noncritical times — and DPS vowed to shut I-10 down more quickly when wind and dust started blowing again.

It did so on April 30 and again on Thursday afternoon and Friday morning.

DPS had taken the unusual step of warning motorists on its website a day in advance that closures were expected those days.

While this one stretch of interstate has become a poster child for blowing dust this spring, the region between Willcox and the New Mexico border is no stranger to dust-caused catastrophes. And it’s not the only location.

Dust regularly reduces visibility on portions of Interstates 8 and 40, and on other stretches of I-10 where 75-mph traffic and low visibility equal mayhem.

If you drive much between Tucson and Phoenix, you know that things can turn deadly in a hurry, beginning just north of Tucson at Red Rock and continuing through an agricultural belt that runs from Picacho Peak to the outskirts of Phoenix.

Central Arizona has hundreds of square miles of degraded desert — much of it former farmland. Arizona State University researcher Peter Hyde said in a recent report that Pinal and Maricopa counties have more than 300,000 acres of fallow or idle cropland.

Franquist said his agency is prepared to respond to complaints and take measures to prevent dust in other areas of the state.

Asked about an area near Picacho Peak that was identified in an Arizona Daily Star analysis of crashes as the deadliest 2-mile stretch of I-10, Franquist said, “We know Picacho is a reoccurring problem. It’s probably high time we got some programs in there.”

Ken Waters, a meteorologist with the National Weather Service in Phoenix, said the recent actions by state agencies are encouraging.

Waters has developed a network of inexpensive dust sensors along I-10 to provide early warning of dust events after hearing at a series of annual dust-storm workshops that the state was powerless to regulate private land along the interstates.

“There is nothing like going to the source to fix the problem,” he said. “We’ve been talking about this for a few years now. I guess after last week, the urgency finally got found.”

Waters also praised the DPS for taking its pre-emptive measures. “I give them a lot of credit for that,” he said

Sen. Steve Farley, D-Tucson, who became a dust-storm crusader after being caught in a deadly crash zone near Picacho, said owners of dust-prone land must be held accountable.

“There may not be a law saying the state has to go in there and fix the problem if the owner doesn’t, but there is certainly no law protecting a landowner from lawsuits for dust emanating on his property,” Farley said.

Tucson likely to hit 100 this week

Dust storms have been closing I-10 near San Simon almost every breezy day.

I-10 east of Tucson has re-opened to traffic

Interstate 10 near San Simon has been re-opened Tuesday afternoon after an hours-long closure because of blowing dust. It's the third time in …

State seeking fines against landowner over dust storms on I-10

Officials hope an "environmental glue" will cap the farm field that's being blamed.

Local environmental quality officials were on "pins and needles" when the Trump administration slapped a freeze on EPA grants earlier this week.

An ADOT sign warned eastbound drivers near Willcox on Wednesday. The region east of Willcox to the New Mexico border is just one of Arizona’s dust-storm trouble spots.

The DPS trooper was not in his car during the dust storm that caused chaos in Cochise County on April 28.

A San Simon rescue truck and a Department of Public Safety patrol car were destroyed in a dust storm on April 28.

Dust storms on April 25 and April 28 along Interstate 10 near U.S. 191 in Cochise County forced closures of the interstate.

Graphic of wind tracks and dust concentrations on April 28.

Dust storms on Interstate 10 near U.S. 191 on April 25 and April 28 in Cochise County forced closures of the interstate. A San Simon rescue truck and a DPS patrol car were destroyed in the storm on April 28.