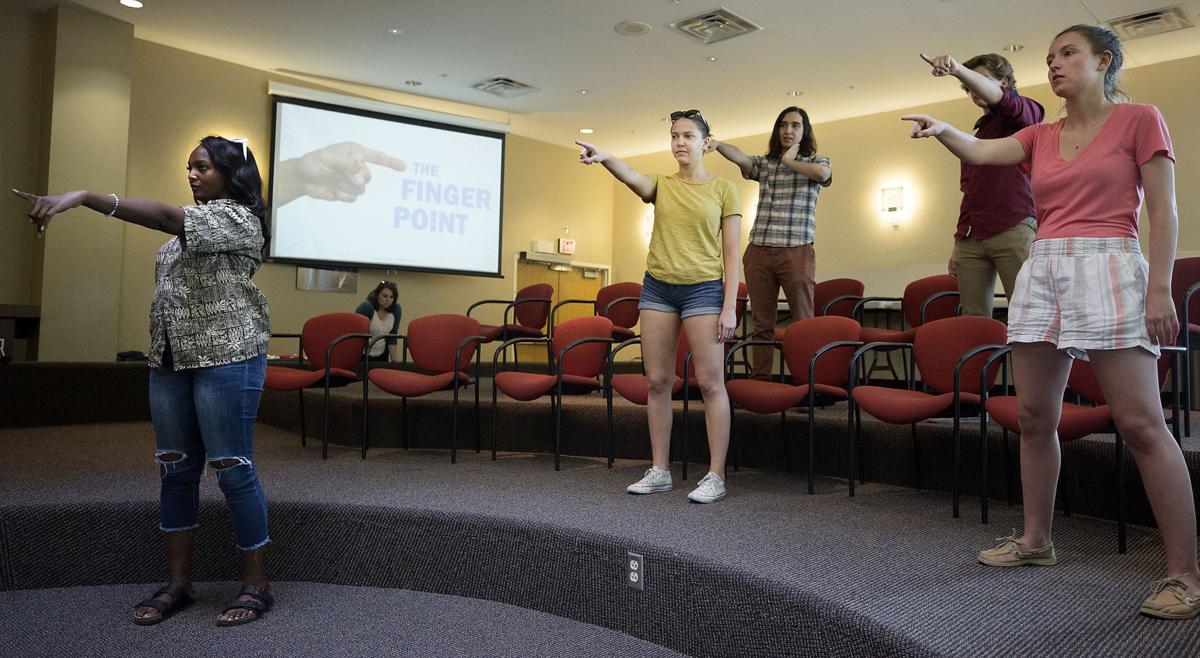 Some 50 University of Arizona students turned out for two presentations this week on how to take a leadership role in changing what some perceive to be a rape culture on campus. 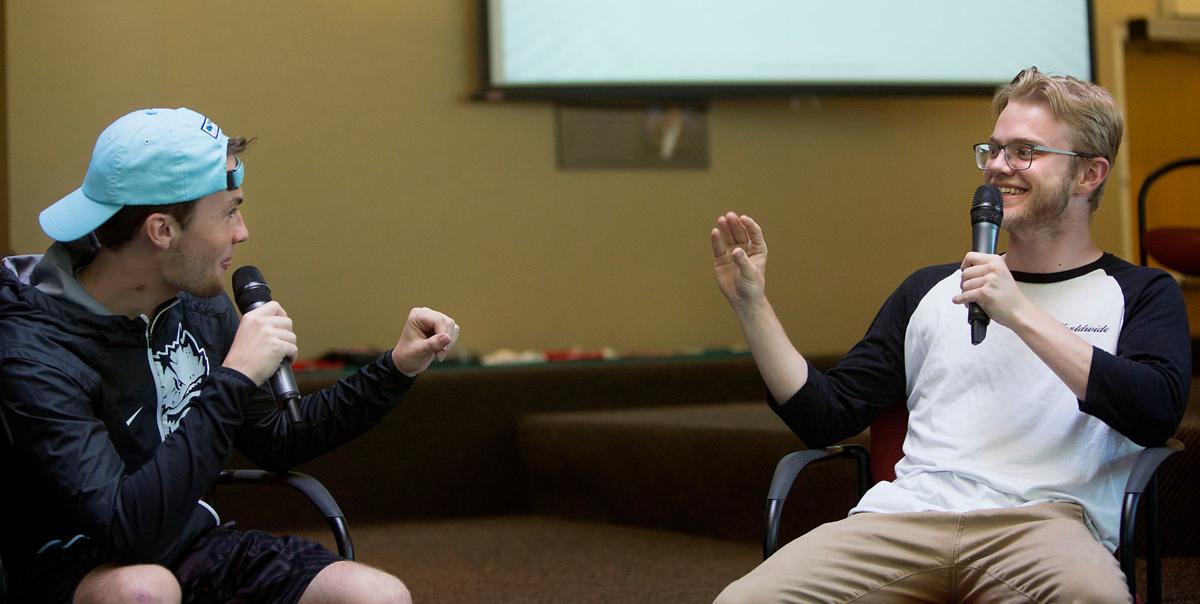 Using their hands as puppets, Christian Ketzner, 19, left, and Ranan McCann, 18, ask for and grant permission in a back-and-forth exchange about intimate and sexual activity. 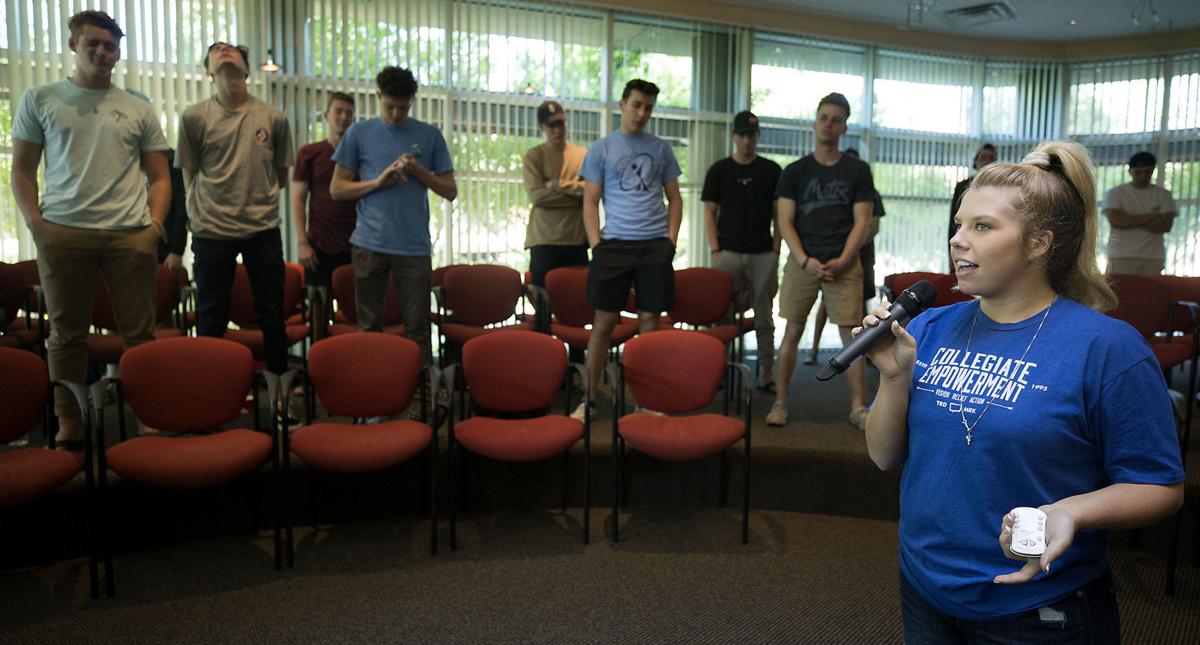 Megan Stier, 22, one of the facilitators from the company Collegiate Empowerment, leads a group of students in an activity during a training session at the University of Arizona.

Sessions to bring awareness of rape culture and sexual assault issues were held this week on the University of Arizona campus.

About 50 UA students turned out for two separate presentations on how to become “masters of consent” and take on a leadership role in changing the campus culture.

Facilitated by the company Collegiate Empowerment, “Masters of Consent” was an interactive presentation designed to teach students about how to shift the culture, take on a leadership role in the process and help facilitate meaningful change. It was part of the programming for Sexual Assault Awareness Month.

During the discussion about consent, Urbanski and Stier took the group through a slide show about actions or words that don’t indicate consent (“silence does not mean consent”) and the importance of saying no.

The discussion moved to what students want from the UA when it comes to creating a campus of consent.

“It would be nice if our campus cared more about the people hurting and ending that instead of normalizing the hookup culture we have and thinking this is just the way it is,” one student replied.

A member of the student-led group Students Promoting Empowerment and Consent, or SPEAC, said that she’d like to be able to have future discussions on the topic of consent without anyone feeling targeted.

Thea Cola, coordinator of Violence Prevention in the UA’s Department of Equity, Inclusion and Title IX, said after the event that the office is hoping to develop a “train the trainer” program and the workshop was a way to begin that effort.

On Thursday, students from SPEAC led a workshop on transforming rape culture at the request of the group Graduate Students of Color.

While the UA’s Title IX Office and Women and Gender Resource Center will continue to hold events to commemorate sexual assault awareness month, for the first time in several years, the school’s student government will not be participating.

The I Will campaign was launched in 2016 by two members of the Associated Students of the University of Arizona, with assistance from 23 campus groups. I Will Week was held in conjunction with Sexual Assault Awareness Month, with events held throughout the week to raise awareness about sexual assault and promote consent, and students being asked to sign a pledge promising to help end rape culture. Last year, there was a resource fair on the UA Mall each day of the week, with events also held every afternoon or evening.

In previous years, the events have been been widely promoted on the I Will campaign’s Facebook page, with daily posts and advanced notice about events. But this year there was less Facebook activity in the weeks preceding the campaign, which was moved up to March 21. For one of the week’s seven events, no location was provided and the Facebook page was widely silent throughout the week, only posting about the final day’s event. Also unlike last year, this year’s I Will Week featured only events for four of the five days.

The president of the Associated Students of the University of Arizona, Natalynn Masters, told the Star in an email that I Will Week was moved up “due to other events in April.”

“April is Spring Fling, election transitions, and hiring in ASUA,” Masters said. “Additionally, the later we have the week in the semester we tend to see more students disengage.”

The attendance at the events is unclear, as Masters did not respond to requests by the Star for follow-up information.

Masters said that unlike previous years, ASUA had access this year to an “all student listserv” and decided to “focus on that platform to promote the events.”

The Star reached out to three UA students to see what kind of emails they received regarding I Will Week. All three said they received only one email that mentioned the I Will campaign, sent out March 18 in the ASUA March Monthly Newsletter. The newsletter featured upcoming events, including the campaign, ASUA elections and the Bear Down Music Festival. The portion of the email that addressed the campaign made no mention of it being I Will Week or the times or locations of specific events being offered on campus .

Masters did not respond to the Star’s request for the emails ASUA sent out regarding I Will Week, so it’s unclear if any additional information was ever provided to students.

In previous years, ASUA has also reached out to members of Greek Life to volunteer and participate in the event, but that also didn’t happen this year.

A national organization dedicated to ending sexual violence has awarded $50,000 to the YWCA of Southern Arizona to expand a program aimed at r…

The student's efforts include a scholarship contest that is entering its second year and resources to navigate sexual assault.

New jail booking process to save money, keep those facing minor charges out of custody

The county is finalizing a construction contract for a permanent, two-story facility.

The University of Arizona has a new hub for services and research related to gender-based violence, thanks to $1.5 million in grant funding.

The 29-year-old woman was found stabbed to death behind Chariot Pizza in midtown.

Opening statements began Tuesday in the case of a Tucson man accused of stabbing his girlfriend to death, with defense attorneys insisting tha…

Visitors to Tucson’s Planned Parenthood clinic will soon have an advocate at their side, working to block out negative interactions with prote…

Chet Jack Wadsworth Maley was found guilty of first-degree murder and kidnapping in the stabbing death of his girlfriend, Roxanne Ortiz.

Employees include former UA football coach Rich Rodriguez, who said he threw away files after he was fired in January 2018.

Some 50 University of Arizona students turned out for two presentations this week on how to take a leadership role in changing what some perceive to be a rape culture on campus.

Using their hands as puppets, Christian Ketzner, 19, left, and Ranan McCann, 18, ask for and grant permission in a back-and-forth exchange about intimate and sexual activity.

Megan Stier, 22, one of the facilitators from the company Collegiate Empowerment, leads a group of students in an activity during a training session at the University of Arizona.