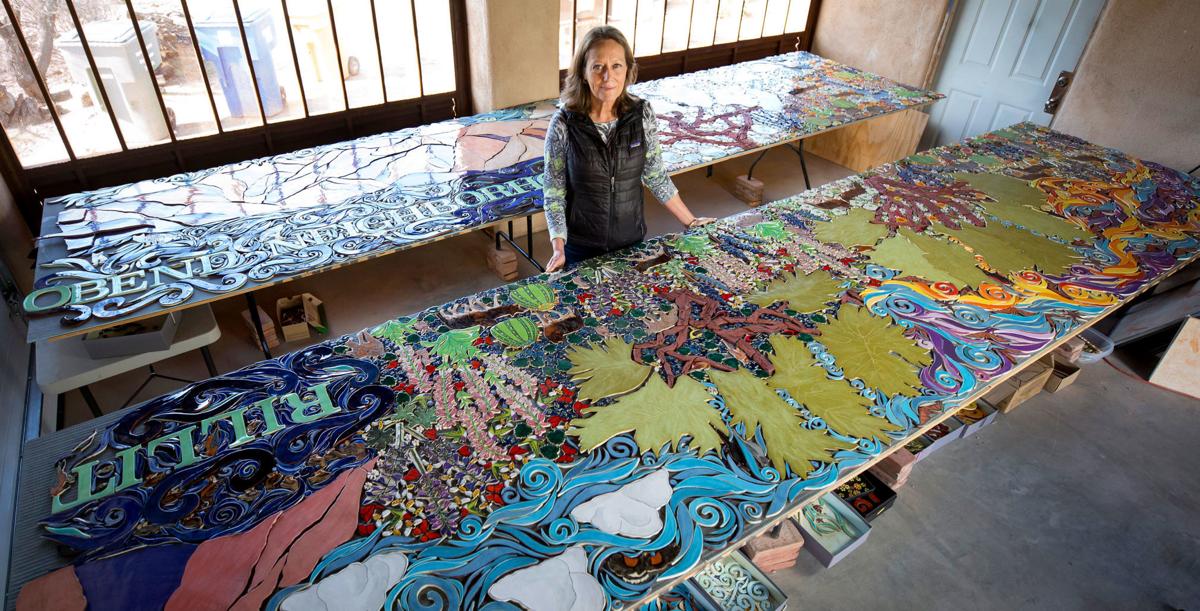 Sue Ann Breems spent more than three years and hundreds of hours working on the mosaic mural in the RillitoBend Neighborhood. The mural is being unveiled on Sunday, March 8. 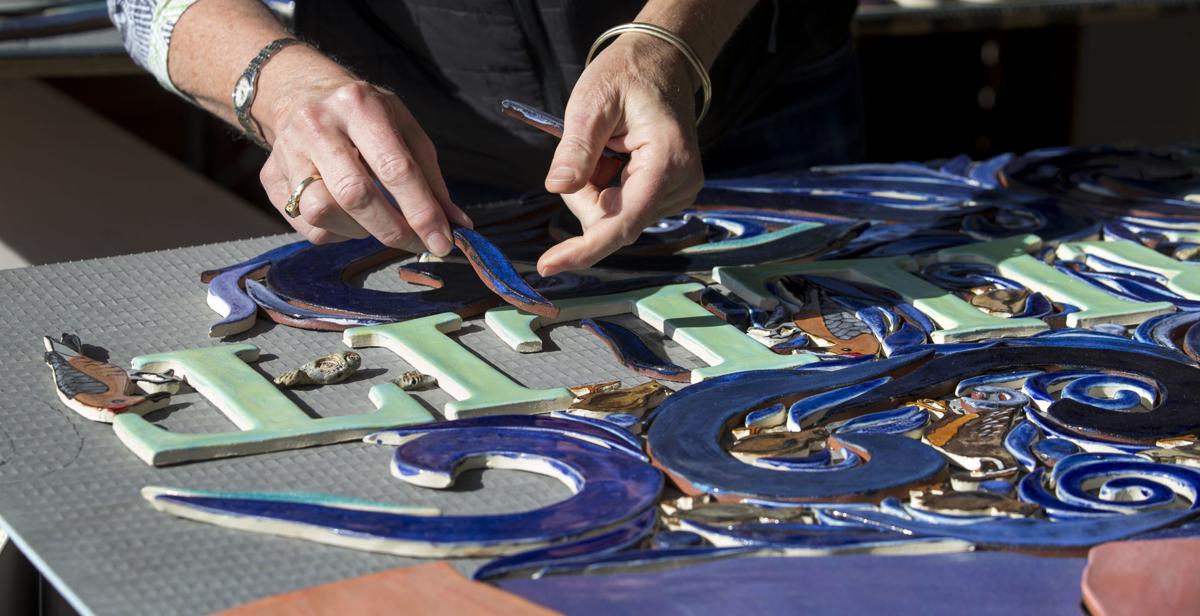 Sue Ann Breems, a retired nurse midwife, on why she wanted to create the mural: “I needed to capture the character of this neighborhood.” 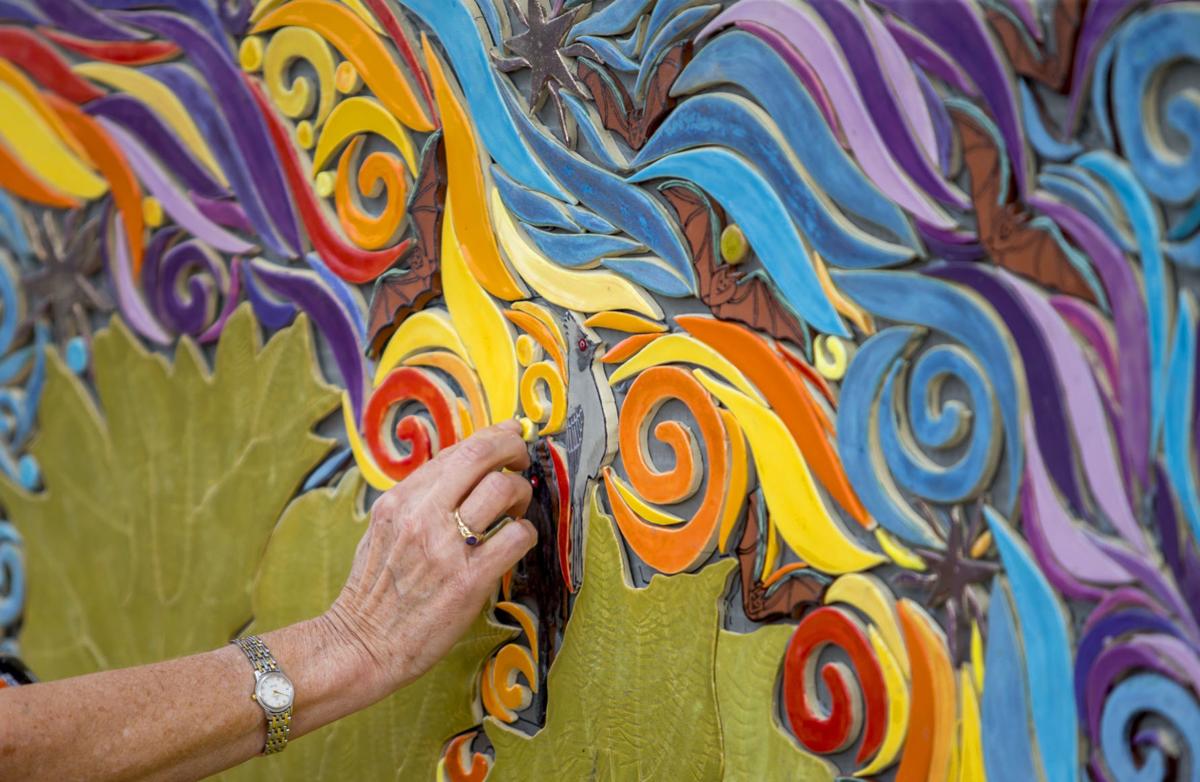 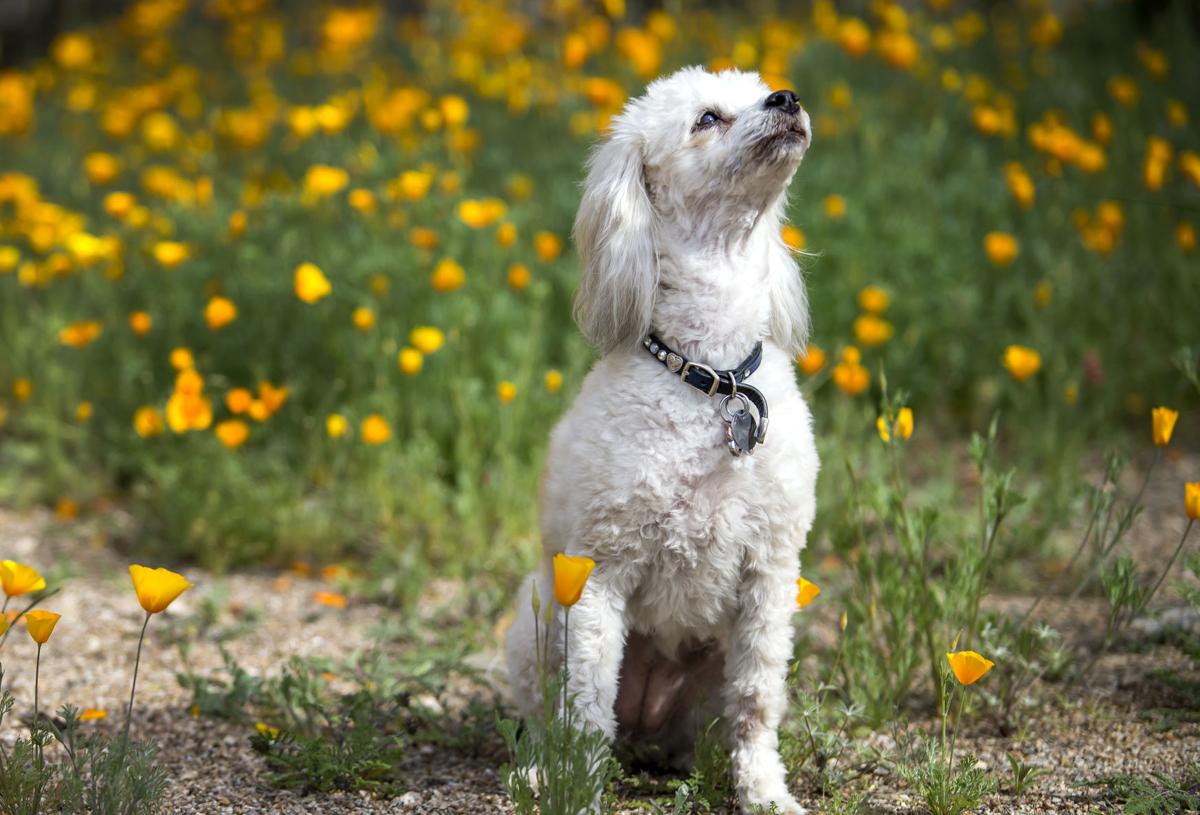 Miss Ellie, a rescue poodle mix depicted on the mural, poses for a portrait. Miss Ellie is owned by Melanie Campbell-Carter, a retired physician who sketched animals for the mural.

As a certified nurse midwife, Sue Ann Breems delivered about 3,000 babies in her career. When she retired in 2016, Breems turned her talents into another form of creation after taking a mosaic tile class that was a present from a woman whose baby she delivered.

Breems’ creation — after more than three years and hundreds of hours in the making — will be unveiled Sunday, March 8, in the RillitoBend Neighborhood. She will introduce a 33-foot-long, 4-foot-tall mosaic tile mural during an afternoon neighborhood dedication at the northeast corner of East Prince Road and North Cactus Boulevard.

Her husband, David Tiers, 71, a retired criminal defense attorney, led a group of friends with experience in construction and architecture to install the 13 sections of the mural onto a perimeter wall of Winterhaven Village, a housing community. The mural is visible from the street.

Tiers led the work in preparing the wall, which is on private property, by making it sturdier for the panels that were glued and screwed into place on a tile backer board on the wall. Breems, 63, and her crew then filled in tiles on the panels before the sections were grouted, the process for a seamless mural taking days.

The colorful, detailed mural celebrating the natural habitat of the RillitoBend Neighborhood is a culmination of imaginative work that Breems spearheaded with the help of many neighbors and friends.

The RillitoBend Neighborhood Association invites the public to see the mural starting Monday, March 9, explaining that a public ceremony at the mural’s unveiling was not held because of limited parking available at the site.

The art piece is a gateway into the rural, yet urban area, that reflects the beauty of the north-side neighborhood that embraces wildlife and desert vegetation. The RillitoBend Neighborhood’s boundaries are roughly south of the Rillito River to East Prince Road between North Campbell Avenue to just east of North Country Club Road, and much of the neighborhood is situated along the Rillito River.

It is home to the 40-acre Rio Vista Natural Resource Park, which is located at the north end of North Tucson Boulevard, and is a popular horse area that offers access onto Rillito River Park. It offers separate pathways for bicyclists and pedestrians, and visitors can also walk through a rock labyrinth that was built five years ago by Breems’ and Tiers’ daughter, Lily Tiers, after she took on the project as a senior at Salpointe Catholic High School. Tucson Parks and Recreation cleared and leveled the land and students and residents volunteered to lay tons of rocks.

RillitoBend has a rich history dating back centuries to when the Hohokam — known for their irrigation systems — farmed the land. The watering source was a flowing Rillito River that gave way in the mid-1800s to ranching and farming by early Mexican and Anglo settlers, and later a Mormon community by the early 1900s.

The cultivation of the land lessened during the Great Depression but did continue into the 1950s, changing in the ’60s as farmers moved out and the land was zoned for development.

Breems and Tiers, who both led agricultural projects in the Philippines during a stint in the Peace Corps in the late 1980s, designed their spacious territorial-style home with walls of rammed earth 2 feet thick on acres just south of the Rillito River, east of Campbell.

It was at their home in a desert setting with the Santa Catalina Mountains in the background and views of breathtaking sunrises and sunsets, along with sightings of wildlife, that the mural took shape.

“In my head, I knew what I wanted. I needed to capture the character of this neighborhood — the bobcats, javelinas, coyotes, rabbits, quail, roadrunners, butterflies, the colorful birds, the three huge velvet mesquites and the wildflowers,” said Breems.

“A famous artist who lived the last years of his life in a studio in this neighborhood was Maynard Dixon (1875-1946),” said Breems of the man whose paintings focused on the American West.

“My tribute to him (Dixon) is that I used his palette of colors for the Catalina Mountains and the fluffy white clouds he often used in his paintings,” said Breems.

Connection to the desert

Sitting in her back yard one winter, Breems captured the mountain range in eight photographs, including Finger Rock, and sketched it to use as templates for the mosaic. She also sketched all the flowers and trees, using imprints of leaves in the templates.

Breems called on Melanie Campbell-Carter, a retired physician who is now a botanical artist, to sketch the animals and birds for templates. Campbell-Carter studied her subjects in library books and on the internet, showcasing a hawk in flight, a Gila woodpecker on the side of a saguaro and quail scurrying among other wildlife.

“The desert is alive so many months out of the year,” said Campbell-Carter, 60. “It nourishes us as we spend time outdoors and visit with each other and enjoy the flowers and take walks in the park or along the Rillito,” said the artist, whose work has been exhibited in galleries around the world.

“There is a real sense that we in the neighborhood are connected to each other and to the desert,” explained Campbell-Carter, describing the mural as a snapshot of all those intricate relationships. Her white, rescue poodle mix, Miss Ellie, and a neighbor’s corgis, Sparky and Maggie, are also featured in the mural.

Murray DeArmond, a former director of student health services at the University of Arizona, and his wife Sue DeArmond, a Tucson Unified School District Board member over three decades ago, were Breems loudest cheerleaders who supported her work and gave her a large kiln and slab roller for the clay, to help get the project done. Private donations totaling $2,000 bought the needed supplies.

“The mosaic will add to the neighborhood,” said 76-year-old Sue DeArmond. “It is very exciting for all of us.” The mural also has beads resembling fish, angels, a cat, and magical-looking creatures that were made by inspiring artist Mary Lou Tompkins. Tompkins, a retiree from TUSD’s fine arts department, died in 2017 at age 95.

Breems would call on her neighbors to come to the work parties that lasted for hours around the kitchen table. Once the clay was rolled into sheets, templates of flowers and animals were traced in the clay and then the pieces were cut out, glazed and fired in the kiln. Each piece was then detailed with ceramic glaze and fired again. The colors used for each piece were mixed, tested and chosen by Breems.

Thousands of tiles were created for the mural and stored in drawers and boxes until Breems laid out and formed the pieces like a jigsaw puzzle on tables in the garage.

“I was awestruck that it was so beautiful,” recalled Lindy Brigham, 69, of the sight last fall when Breems began putting the mural together.

Brigham, a former research assistant professor at the UA College of Agriculture and Life Sciences, and her husband, Stephen, 69, a retired architect and planner for the UA, took part in the work parties making mosaic tiles.

The couple also approached the Winterhaven Village homeowners’ association about the mural finding a home along its perimeter wall, which the association welcomed.

“Sometimes art seems like magic, especially with mosaic work when all those little pieces come together,” said Campbell-Carter, awaiting the dedication of the finished piece.

MURALS: A look at some of Tucson's many beautiful murals

The RillitoBend Neighborhood is unveiling its new mosaic tile mural on March 8.

The RillitoBend Neighborhood will unveil a mosaic tile mural March 8, 2020.

Sue Ann Breems spent more than three years and hundreds of hours working on the mosaic mural in the RillitoBend Neighborhood. The mural is being unveiled on Sunday, March 8.

Carla Granat, visiting from Seattle, takes pictures of Vonna Marcus working on the mural at North Cactus Boulevard and East Prince Road. The colorful artwork celebrates the natural habitat of the RillitoBend Neighborhood. 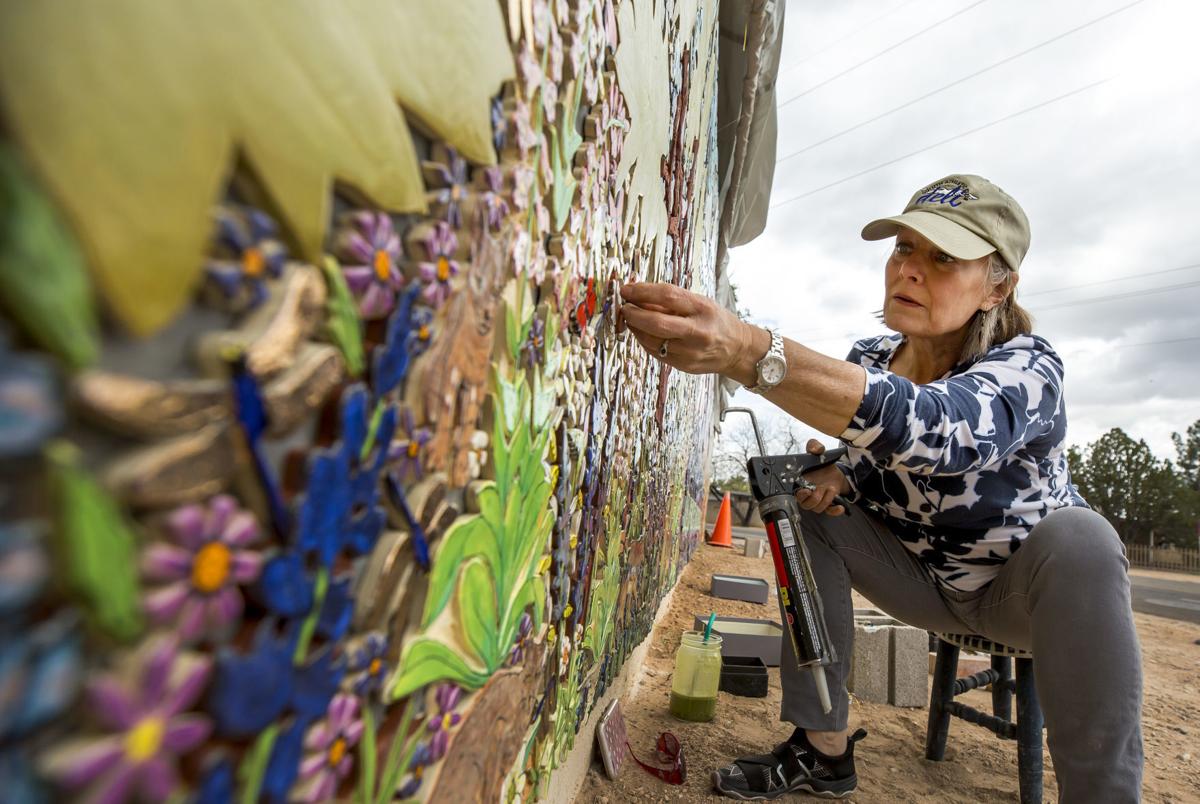 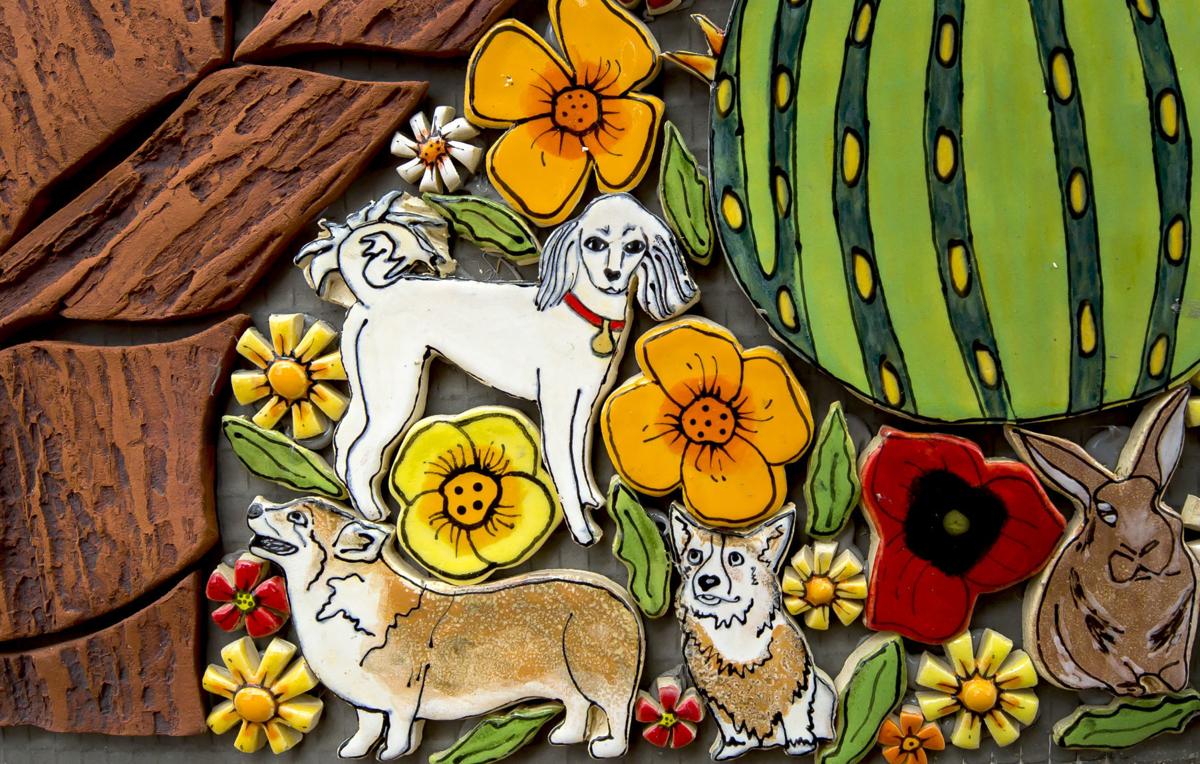 Likenesses of Miss Ellie and two corgis owned by one of Breems’ neighbors grace the RillitoBend Neighborhood mural, along with depictions of desert wildlife. 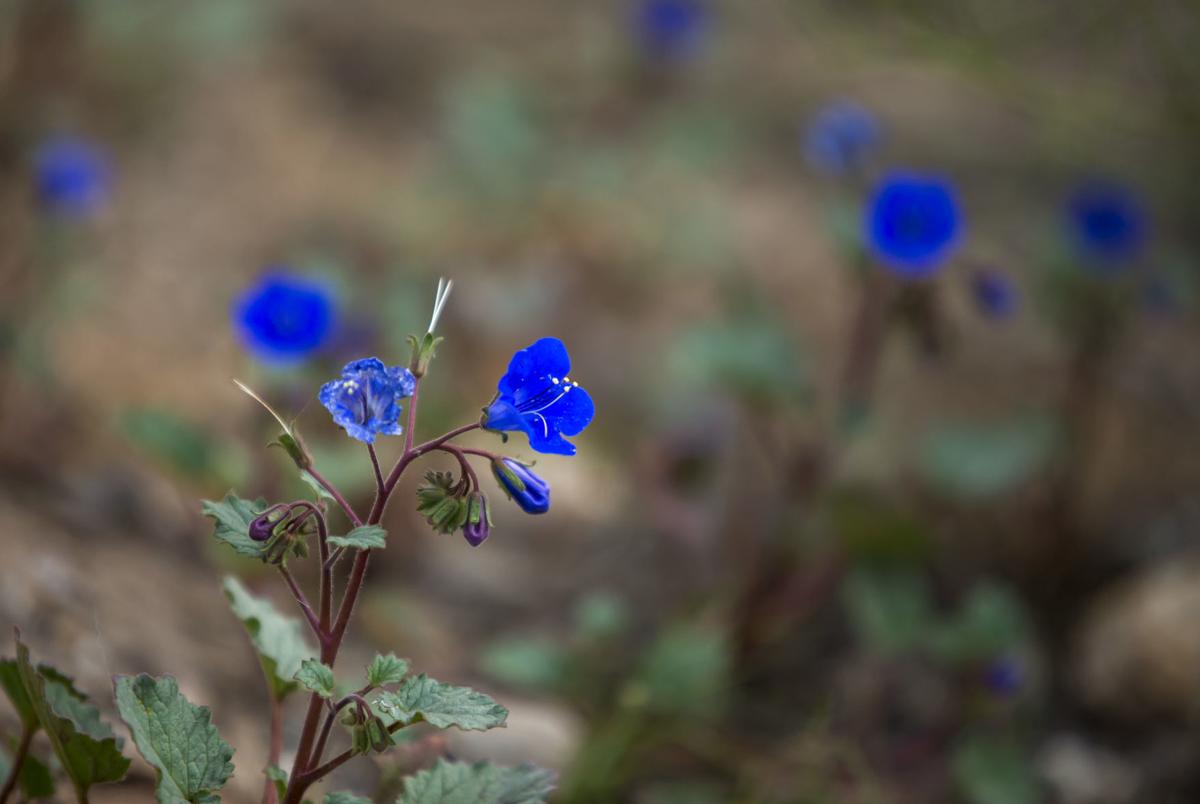 For the mural, Breems sketched flowers and trees from the area around the Rillito River. She used imprints of leaves as the templates.

Sue Ann Breems, a retired nurse midwife, on why she wanted to create the mural: “I needed to capture the character of this neighborhood.”

Miss Ellie, a rescue poodle mix depicted on the mural, poses for a portrait. Miss Ellie is owned by Melanie Campbell-Carter, a retired physician who sketched animals for the mural.