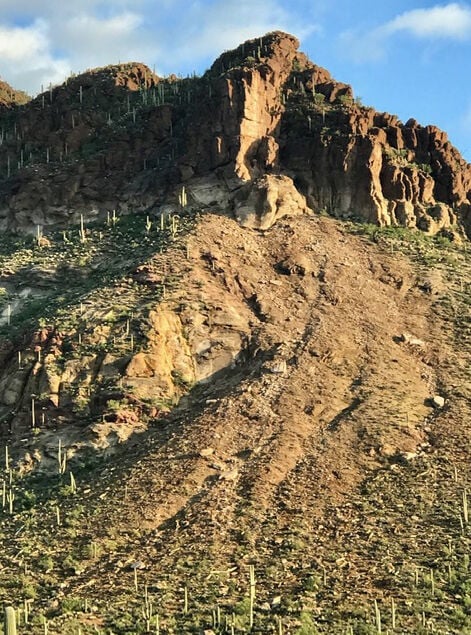 A landslide on Sunday took down many saguaros on the southeast side of Golden Gate Mountain in Tucson Mountain Park. 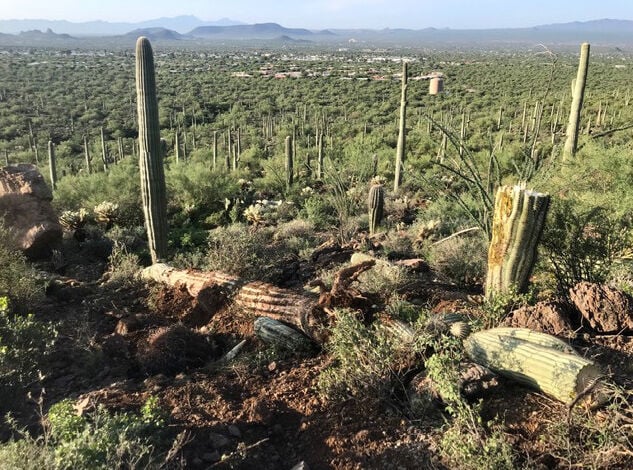 Photo shows result of a landslide that occurred on the southeast side of Golden Gate Mountain in Tucson Mountain Park on July 25, 2021.

A landslide brought it down.

That’s what happened to a swath of saguaros and earth on picturesque Golden Gate Mountain in Tucson Mountain Park last Sunday.

“A number of saguaro cactus were knocked down in the path of the slide,” says a memo from Pima County Administrator Chuck Huckelberry. “But many more were destroyed by the rocks traversing downhill from the slide area destroying anything in its path.”

The landslide occurred in an area of the park devoid of trails and away from public areas, said Karen Simms, division manager of Pima County Natural Resources. But she said people should avoid the area anyway.

“The main thing that we would want to encourage people is to not climb up there and try to look at the area where the fall happened,” she said. The slide was on the mountain’s southeast side.

The cause isn’t known, Simms said. She was hesitant to attribute it strictly to heavy rains in the area over the weekend.

“Certainly, that kind of all-day-long rain we had wouldn’t typically be the kind of thing that would cause something like this,” she said.

Instead, Simms suggested there could be some instability revealed by the rains near the summit.

Her main concern at the moment is about the scar that is now visible on the mountain’s face.

“What would typically happen with a scar like this is you’ll eventually start getting vegetation that will move in, what we call early ‘successional species,’ first, which tend to be weedy things,” she said.

Which weedy thing establishes itself best is what worries Simms.

“We could get buffelgrass moving into that area,” she said. “That is entirely a possibility.”

An invasive species, buffelgrass is reviled for its ability to outcompete native desert plants and grasses, and because it provides fuel for wildfires.

Golden Gate Mountain, which sits just southeast of the now defunct Old Tucson Studios and stands more than 4,200 feet tall, is probably best known for its appearances in classic Western movies shot at the studio, especially those featuring John Wayne, including “McLintock!” and “Rio Bravo.”

While Tucson is still months away from the official end of the 2021 monsoon season, the city has already received more rain than what 2020's disappointing monsoon season graced us with.

From storms, flash floods to foggy skies — social media captured it all this July weekend.

Tucson monsoon season is wettest on record through July 25

Through Sunday, it's the wettest Tucson monsoon since our weather records began in the 1890s, National Weather Service says.

At least six people were injured in the Thursday afternoon attack.

Officers responded to a fatal car crash on Pima Mine Road, east of Interstate 19 on Thursday morning.

A landslide on Sunday took down many saguaros on the southeast side of Golden Gate Mountain in Tucson Mountain Park.

Photo shows result of a landslide that occurred on the southeast side of Golden Gate Mountain in Tucson Mountain Park on July 25, 2021.