Dodgers vs. Rays: Updates from Game 1 of the World Series

Legal help, a rarity, extended to asylum seekers in Nogales
Share this
1 of 2 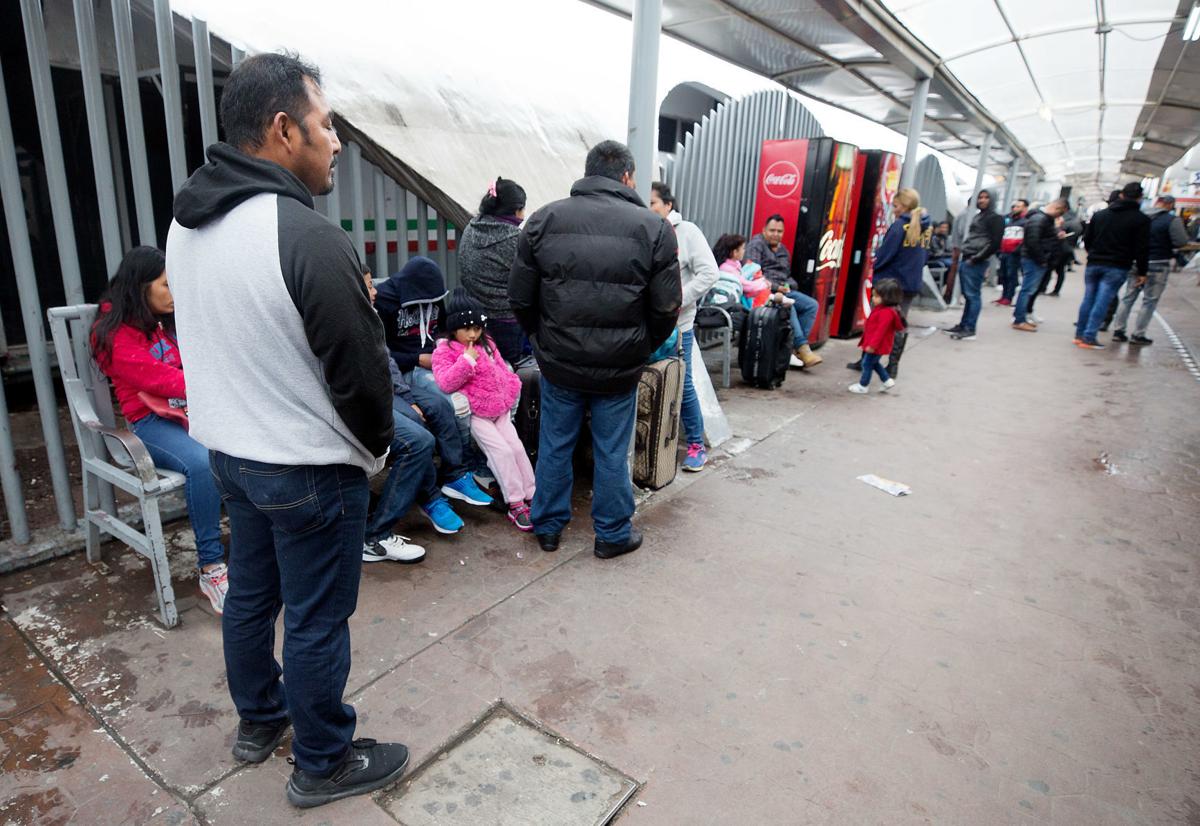 Only about 5% of the asylum seekers in the Migrant Protection Protocols have lawyers. Some of them are getting help at free workshops held by a Arizona-based legal aid group, 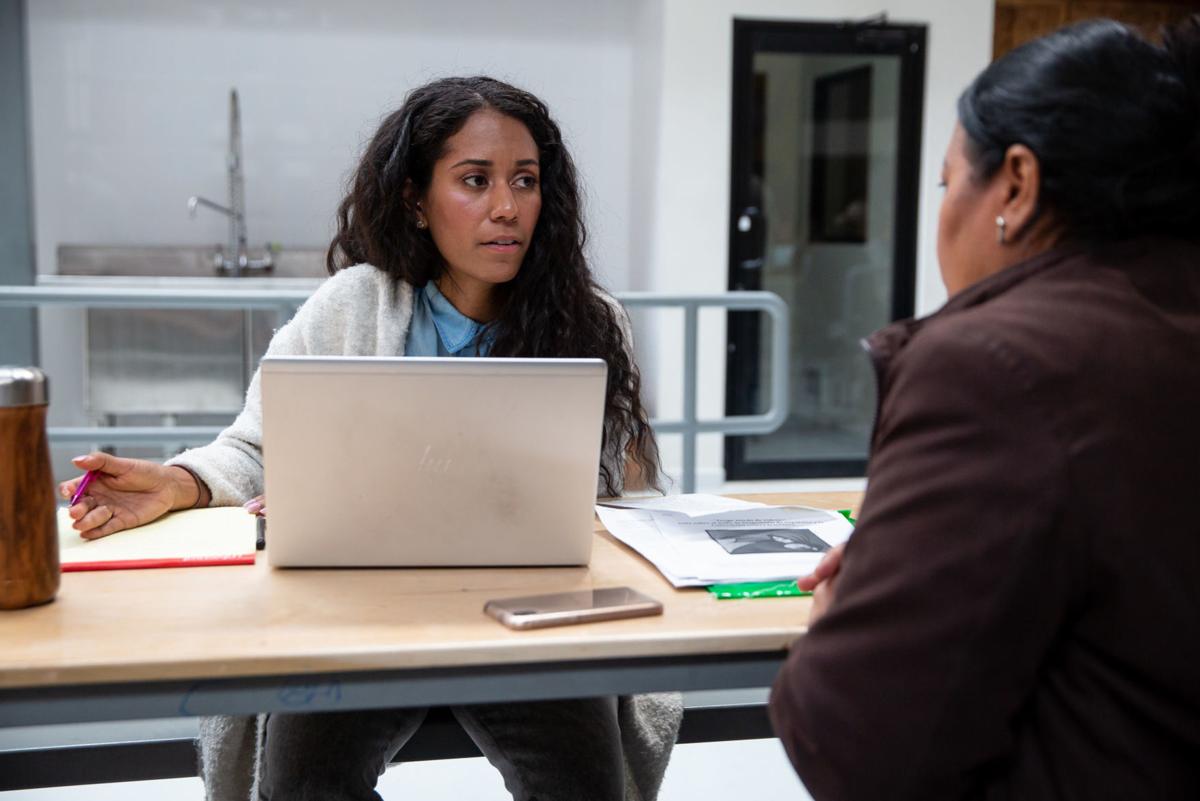 Alex Miller, a lawyer with the Florence Immigrant and Refugee Rights Project, assists an asylum seeker from Honduras with his application during a legal workshop in Nogales, Sonora.

NOGALES, Sonora — Nearly all asylum seekers here will face immigration judges on their own, but they now are getting a bit of help with the legal paperwork that could determine their fates.

Last week, two dozen asylum seekers bent their heads over documents and laptop screens as they sat at long tables inside a migrant shelter in Nogales. Across from them sat lawyers, law students and social workers patiently helping to distill traumatic experiences into language that could fit into an asylum application.

The Florence Immigrant and Refugee Rights Project, a nonprofit legal aid group, is holding monthly workshops to help asylum seekers with their applications. The painstaking process takes hours, with the constant worry that even the slightest error or cultural misunderstanding could jeopardize an asylum claim.

Among the asylum seekers seated at the tables was Maria, a woman from Honduras who did not want her last name used out of fear the people she fled would find her in Nogales. For three hours, Maria quietly described the details of her life and pulled documents from a plastic folder, including birth certificates and a narrative she had written on notebook paper.

Tears filled Maria’s eyes as she described what happened to her and her daughter in Honduras, the emotion forcing her to get up from the table and walk away for a few minutes to regain her composure.

She had been telling Alex Miller, a lawyer with the Florence Immigrant and Refugee Rights Project, about the crackdown on Hondurans who banged pots and pans in protest of the presidential elections in late 2017, as well as harassment by a violent gang and the targeting of her daughter for sexual exploitation in December.

She and her daughter fled Honduras and crossed the U.S.-Mexico border near Lukeville in late January. They were sent to Nogales days later under the Migrant Protection Protocols, also known as “Remain in Mexico.”

While Maria waits in Nogales, she lives in an apartment with families she met during her journey. She said they spend most of their days worried and “shut in” their apartment, a not uncommon scenario for asylum seekers stranded for months in Nogales.

“People are scared and concerned and don’t know what to do,” Miller said.

In the coming months, the asylum seekers at the workshop will travel some 300 miles to Ciudad Juarez and then to immigration court in El Paso for their first hearing, where they will be advised of their rights and given another court date.

“Almost all of them will do this by themselves,” Miller said, explaining “there is not enough access to legal resources, and we’re only able to do this with volunteer support from the community.”

About 5% of the roughly 61,000 asylum seekers in the Migrant Protection Protocols have lawyers, according to clearinghouse data. Those with lawyers have a far greater chance of being granted asylum, accounting for more than half of the 263 cases where asylum was granted.

Miller said she is grateful for the help from volunteers, some of whom came from San Francisco last week, but “the need shouldn’t exist.”

Until January, Customs and Border Protection released asylum seekers in Arizona to shelters, including about 20,000 in Tucson. They would spend a few days at shelters and then travel to live with family and friends elsewhere in the United States, where they could pursue their asylum cases.

That system was upended in early January when CBP started sending 30 asylum seekers each weekday to Nogales. Since then, fewer of the families that generally surrender to agents and ask for asylum have crossed the border in the Border Patrol’s Tucson Sector, falling from about 2,400 in December to about 970 in February.

Last week, a line of families and men who were traveling alone formed outside the port of entry, as they do most days.

The Star has spoken with dozens of asylum seekers since the Migrant Protection Protocols began in Nogales. For the first time, a man said last week that he was in touch with a lawyer in the United States.

Another man gave a more typical response. He rubbed his fingers together and shook his head: No money for that kind of thing.

He was unaware of the free help offered by the Florence Project. Miller said many of the asylum seekers who go to the workshops hear about them as they eat at the dining hall run by the Kino Border Initiative, a Catholic organization that recently opened the large migrant shelter where the workshops are held.

Jesse Evans-Schroeder, an immigration lawyer in Tucson, applauded the efforts by the Florence project, not only for offering legal aid but also their social work that provides “holistic support” for asylum seekers.

Evans-Schroeder has worked with numerous asylum seekers in the past two years in Arizona, but does not handle Migrant Protection Protocols cases. Instead, she works with clients in the United States, often in immigration detention centers by Immigration and Customs Enforcement.

She and a paralegal spend as much as 100 hours on a case as she gets to know her clients, speaks with family members, researches country conditions and accompanies them to court.

Legal help has become even more necessary for asylum seekers in the past two years as the Department of Justice, which oversees immigration courts, raised the bar on who can be granted asylum, Evans-Schroeder said.

One of the biggest changes was to routinely deny asylum requests based on fear of private actors, such as domestic violence or gang violence, rather than governments, she said.

Asylum seekers are “not going to get a fair shake” if they don’t have a lawyer help them answer questions from judges or federal lawyers at hearings, Evans-Schroeder said.

“The tenor of the courts right now is such that even the most minor inconsistency, or perceived inconsistency, can destroy a case,” she said. “You need somebody to go to court with you.”

On top of the daily stress of life as an asylum seeker, their future is increasingly uncertain as immigration policies go through another upheaval, Miller said.

Last week, the Migrant Protection Protocols program was on the verge of being blocked by the 9th U.S. Circuit Court of Appeals, but the Supreme Court let the program continue. Even without courts blocking the program, it shrank from about 12,000 cases filed in August to less than 2,000 in January, according to federal data compiled by the Transactional Records Access Clearinghouse at Syracuse University.

As the program shrinks, the Trump administration has started two other programs in Texas that could expand to Arizona. Those programs keep asylum seekers in CBP detention facilities, where access to lawyers is limited. Their claims are processed within 10 days, according to the Migration Policy Institute. In yet another program, some asylum seekers may be deported to Guatemala to seek asylum in that country.

While Honduran asylum seekers wait fearfully in apartments in Nogales, Tony Hernandez, a former Honduran congressman and brother of the Honduran president, was convicted in federal court in New York of smuggling massive amounts of cocaine.

Honduran President Juan Orlando Hernandez, is identified in court documents as “CC-4,” or co-conspirator 4. Federal prosecutors alleged he took a $25,000 bribe from a drug trafficker in exchange for protection of a cocaine laboratory around 2013. Hernandez denied the allegations, saying they were based on lies from criminals looking for vengeance or to reduce their sentences.

Another alleged conspirator was arrested in Miami earlier this month. Federal prosecutors said he was a key player in an “unholy alliance of Honduran officials and drug traffickers,” according to a March 3 Department of Justice news release.

For Jorge Ibarra, a 48-year-old Cuban asylum seeker in Nogales, Sonora, only a few facts are clear: "If I go back to Cuba, I go to prison." When it comes to navigating the Mexican and U.S. immigration systems, "I don't understand anything," Ibarra said.

Migrants biding time in Sonora are in scramble for medical care

New federal protocols keep asylum seekers in Mexico, where many scrounge up already scarce money to pay for medicine and treatment at hospitals and clinics.

Restrictions due to coronavirus slow drug smuggling along Arizona border

The coronavirus pandemic ended the daily bustle at ports along the Arizona-Mexico border, and apparently some of the cover it provided to drug…

Cuban asylum seeker in Nogales 'can barely sleep' while separated from wife, son

There are about 23,000 asylum seekers with pending claims under the Migrant Protection Protocols, also known as Remain in Mexico, waiting in border towns for hearings in U.S. immigration courts.

Only about 5% of the asylum seekers in the Migrant Protection Protocols have lawyers. Some of them are getting help at free workshops held by a Arizona-based legal aid group,

Alex Miller, a lawyer with the Florence Immigrant and Refugee Rights Project, assists an asylum seeker from Honduras with his application during a legal workshop in Nogales, Sonora.