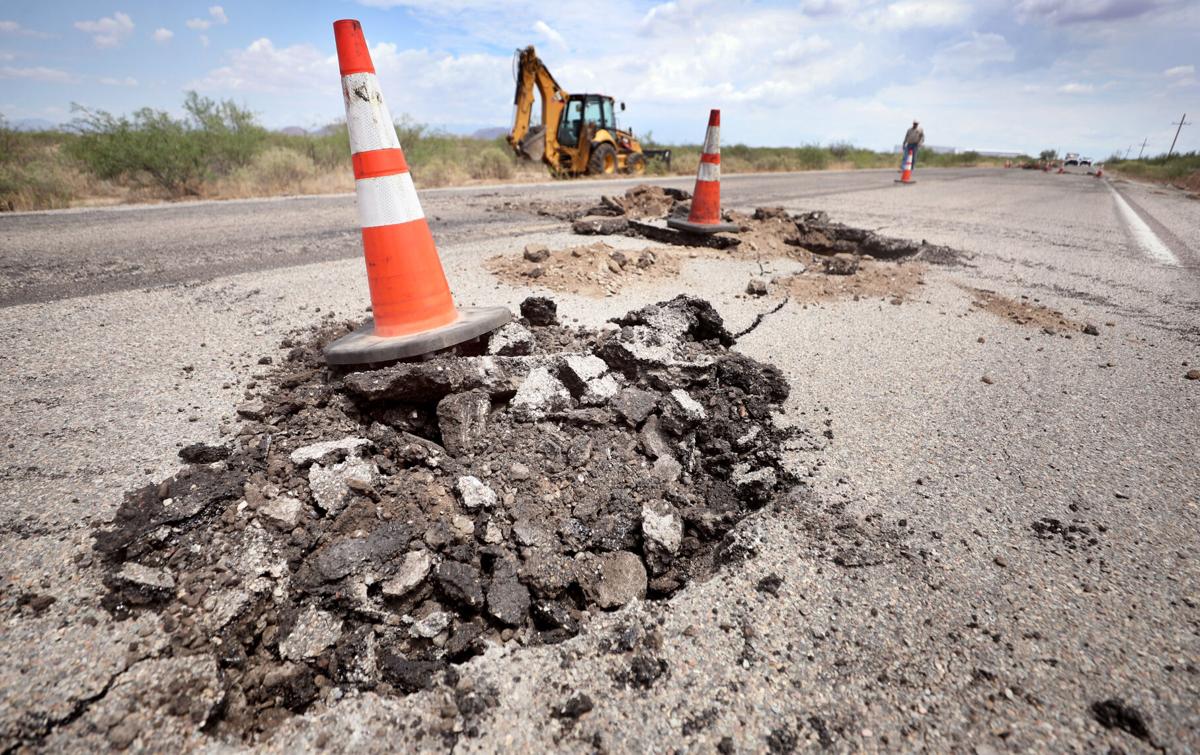 A couple of test holes punched into the pavement expose a small part of the fissure running under a long stretch of U.S. 191 near Sunsites.

Cracks in the pavement running down the middle of the highway showing where a fissure has opened up under US 191 near Sunsites. 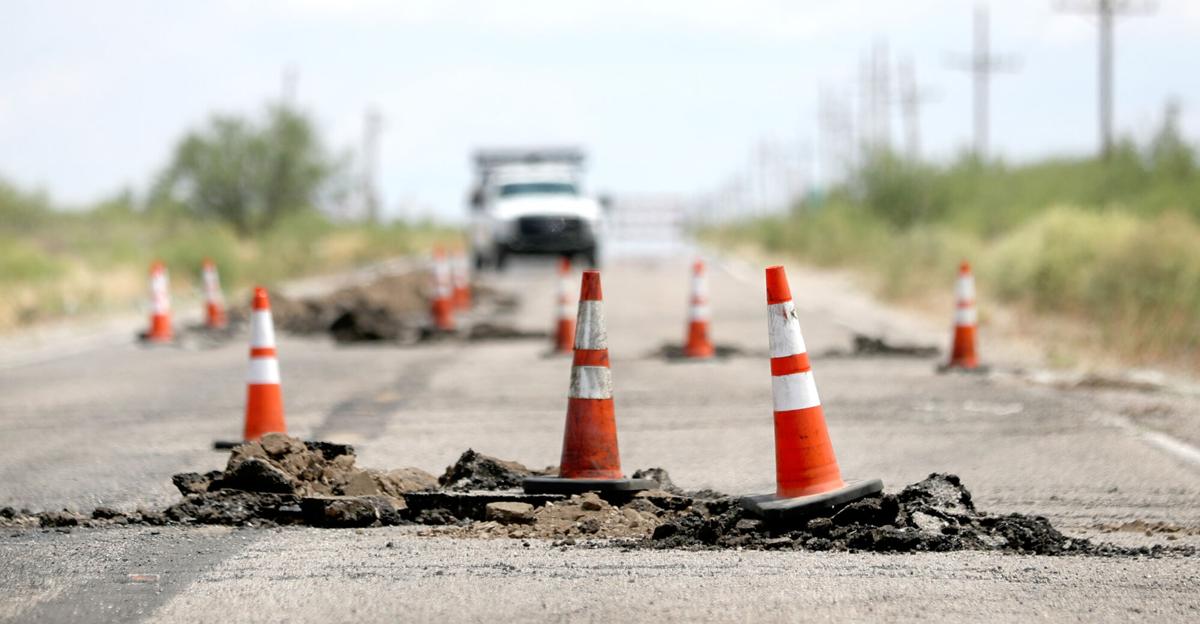 Cones mark the test holes pushed in an effort to learn the extent of a fissure running under a long portion of US 191 near Sunsites.

A big crack opening up to 10 feet deep in the earth forced closure of a stretch of U.S. 191 in Cochise County this week, inconveniencing drivers and deepening local concerns about the impacts of unregulated groundwater pumping on that basin’s aquifer.

The Arizona Department of Transportation closed a 5-mile section of the highway linking two rural communities lying southwest of Willcox early Tuesday after heavy rains caused cracks to open in the road through erosion.

The crack was up to 8 to 10 feet deep and opened up to 2 feet wide in spots before work crews could fill it in on Tuesday and Wednesday, although much of it was thin and almost hairline. The crack covered roughly a quarter-mile-long area, said Bill Harmon, district engineer for ADOT’s Safford-based, Southeastern Arizona district.

In part because the road is left in unstable condition, Harmon said he doesn’t know when it can reopen. Traffic on 191 — the main link between Interstate 10 and Douglas — is being detoured to the west for the foreseeable future.

“This is the worst situation I’ve encountered with earth fissures,” Harmon, who has worked for the agency 22 years, said Wednesday. Fissures are cracks triggered by the sinking of land caused by groundwater overpumping, although some questions remain about whether this opening was instead due to natural causes.

Harmon ranked it as the worst because of the impact the road closure has on the public and the uncertainty about when the road will reopen. While earth fissures have been common in the past in Cochise County, “usually, dealing with this situation is more straightforward, easier to detect, deal with and repair,” he said.

Already, advocates of tougher restrictions on groundwater pumping in the area are saying they plan to use this fissuring incident to help push for regulations. This region, like the rest of rural Arizona, now has no restrictions on pumping, unlike the big urban areas.

Excessive groundwater pumping can cause fissuring when the removal of large amounts of water from an aquifer causes the land holding that water to sink, a process caused subsidence.

An Arizona Department of Water Resources study in 2018 documented significant overdrafting of groundwater in the Willcox basin’s aquifer, but since then, critics of the pumping have made little or no headway with local and state officials in getting it limited.

But now, “people are really getting lit up” over the fissure, said Jessica Jones, who with her husband and son live in the Richland area, just west of where the crack opened in the highway.

Jones, an organizer of a Cochise County-based group called Groundwater Guardians, said she knows about 10 families living in her area that have had to deepen existing wells or drill new ones in recent years because their existing wells dried up.

“It’s scary when this happens because there’s no forewarning as to when or where it will happen next and because there’s then no stopping people from throwing trash or contamination down the cracks into the aquifer,” Jones said.

But fissuring is a fact of life in the basin and will probably continue even if pumping is cut back, countered Richard Searle, a former, three-term Cochise County supervisor and a longtime grower of pistachio nuts on 20 acres lying about a mile from where the cracks opened this week.

“Yes, this will be a tool for activists. Is there anything they can do about it? Probably not,” Searle said. “If you want to link it to the pumping of water, it was or could have been caused by pumping of water 20 or 30 years ago.

“Do we need to deal with the water issue? Yes. But the fissure is a symptom. They are not going to go away anytime soon, whether we stop pumping or continue pumping,” he said.

Questions about the cause

One complicating factor is that it’s not yet a settled question as to whether this crack’s formation is due to groundwater pumping or to natural causes.

That general area is known to have both earth fissures, which tend to be deeper and are formed due to human-caused land subsidence, and giant desiccation cracks, shallower natural features whose presence is often triggered by alternating patterns of wet and dry weather that cause the crack to open, said Harmon.

“Without a lot of thorough investigation it might be hard to tell the difference between the two. (But) looking at what I see out there, what’s happening, my initial belief is that it is an earth fissure, because it could be quite deep and the apparent length of it.”

Desiccation cracks tend to occur in polygon shapes, often formed by mud puddles when they start drying up, he said. This feature appears to be “somewhat more linear,” he said.

State geologist Joe Cook said from what he first saw of that area on Google Earth maps, there appear to be polygon-shaped cracks that formed on both ides of the road that suggest the presence of the natural desiccation cracks.

But after he learned from a reporter Wednesday afternoon that the crack on the road itself went up to 10 feet deep, Cook said the area could have both a combined desiccation crack and an earth fissure. He plans to visit this week to get a closer look, he said.

“It’s possible that we had pre-existing polygonal stuff and we had a fissure go through that area,” said Cook, who is with the Arizona Geological Survey.

Generally, Cochise County and the Willcox Basin in particular has the worst subsidence in all Arizona, he said. The area where the latest crack occurred had between four to six inches of ground settling between April 2020 and April 2021, an Arizona Department of Water Resources map shows.

In the Willcox Basin, which has no other water supply besides groundwater, agricultural water use had been rising through much of the 2010s to an estimated 208,000 acre feet in 2017, the most recent year for which such statistics are available. That’s about double what the 700,000-plus residents in Tucson Water’s service area use in a typical year.

Tucsonans took to social media to share these photos of a particularly colorful sunset on July 7.

Felix Alexandrew Pichardo, 18, was shot and killed in a brawl Wednesday at an apartment complex that involved people he knew. Police are asking for tips in the case.

The section of U.S. 191 south of Willcox reopened Wednesday after more than a week of repair work.

Drivers traveling from Benson to St. David and Tombstone are having to take a 20-mile detour due to the road closure about 5 miles south of Interstate 10.

A couple of test holes punched into the pavement expose a small part of the fissure running under a long stretch of U.S. 191 near Sunsites.

Cracks in the pavement running down the middle of the highway showing where a fissure has opened up under US 191 near Sunsites.

Cones mark the test holes pushed in an effort to learn the extent of a fissure running under a long portion of US 191 near Sunsites.