Implementing more than 2,000 pages of new federal guidelines and regulations regarding gender discrimination and sexual misconduct on campus would be challenging in the best of times.

But spreading the word about such intimate topics to students distanced due to the coronavirus forced the University of Arizona to get creative.

Just a few months after sweeping changes to Title IX were handed down in May, the UA and affiliated groups have distributed masks, hosted game nights, trained bar employees, launched social media campaigns and more.

Title IX is a federal law implemented in 1972 that says every person has a right to an education free from discrimination on the basis of sex. Under the new federal guidelines and regulations, the definition of sexual harassment narrowed so that the action must be “severe, pervasive and objectively offensive.” Dating violence, domestic violence, stalking and sexual assault are excluded from that standard.

The guidelines, in response to President Trump’s December 2017 announcement that he planned to slash government regulations regarding sexual discrimination in education, required schools to provide supportive or interim measures, which was already happening at the UA. Other changes include live hearings with cross examinations, a bifurcated process where fact-finding and decision-making are separate, a new appeals process and changes in which employees are required by law to report possible violations of Title IX.

Schools are no longer required to investigate under Title IX claims of sexual harassment or assault that take place off campus, but the UA will continue to investigate off-campus incidents for potential code-of-conduct violations, said Mary Beth Tucker, the UA’s interim associate vice president of equity and Title IX coordinator.

The result of the new guidelines is a process that is more streamlined and perhaps easier for students and employees to understand, Tucker said.

Under the new system, once a person comes forward, he or she is immediately offered supportive measures regardless of jurisdiction.

“If the student is interested in an accountability process, (meaning an) investigation and outcome ...then we have the opportunity to talk through what that process might look like for them,” she said. “We also would have to learn about the circumstances, because circumstances will help us navigate the different channels of accountability that now exist.”

Sometimes, the complaints are outside of Title IX’s jurisdiction, in which case the student or employee can explore other options under the UA’s existing nondiscrimination and anti-harassment policy or the code of conduct, if applicable.

“They may have a concern that doesn’t fit with that new definition, like off-campus injury from a partner. The university still wants to have that accountability process and we still do. It’s just a matter of understanding the situation and talking the student through the process,” Tucker said. “We want students to know there are options available to them.”

UA employees already complete online Title IX training through a program called EverFi, used at universities across the country, and the university will start introducing it to students in the spring.

But officials knew that wasn’t enough. So the UA’s Consortium on Gender-Based Violence — which has taken the lead on prevention and education regarding Title IX — hired four students to assess the situation. Their job was to talk with students about what was already happening in specific groups like fraternities, and to ask what students wanted and felt was missing.

By the time students arrived on campus to move into dorms and Greek houses, the consortium was ready. Director Elise Lopez and her staff distributed 1,000 red and navy masks printed with the phrase “Wildcats get consent” along with bottles of hand sanitizer.

Then they launched a social media campaign, inviting students to post photos of themselves in their masks using specific hashtags, with a randomly selected winner receiving a popular Hydroflask water bottle.

“Emerge was specifically talking to us about how to create messaging that was particular to college students,” Lopez said, adding that research has shown students better relate to the concept when it’s referred to as “dating violence.” Students who reposted the UA’s dating violence information on social media were entered into drawings for gift cards, and various offices around campus worked together to make a statement about dating violence.

The UA’s Survivor Advocacy program, launched in August 2019, has also pivoted in response to the pandemic. Instead of offering in-person appointments and walk-in hours, the program now offers phone or Skype meetings Monday to Friday from 9 a.m. to 5 p.m. Advocates have also set up virtual drop-in office hours on Tuesday and Thursday from 10 a.m. to noon, which don’t require an appointment.

Other groups and businesses are also helping to reach UA students and staff.

As bars teach their employees about new coronavirus-related safety measures and updated liquor policies, many have asked the consortium to provide a different type of training while they’re at it: bystander intervention.

The UA has been working with local bars on and off since 2014 on an Arizona Department of Health Services research project and program called the Arizona Safer Bars Alliance.

“As bars have started reopening, even at limited capacity, there’s still the possibility of sexual aggression occurring. Even if the congregating in the bar looks a little bit different, the effects of alcohol do not change,” said Lopez, of the Consortium on Gender-Based Violence.

Five hours of training cover cues of sexual aggression and safe and effective ways to intervene. One session focuses on getting people on the same page in terms of what sexual aggression looks like, which always elicits honest conversations amongst staffers about what they’ve seen in their workplaces, according to Lopez.

“You can see the change in people as the training progresses,” Lopez said. “There’s lots of sharing involved.”

“It’s not about how to call law enforcement better or throw people out better. We talk about what intervention looks like, and it can be subtle,” Lopez said. “Patrons want this, and focus groups have shown that staff wants to help.”

Another bystander intervention program is being reinvigorated across campus, with support from the NCAA.

Step UP was designed several years ago by Becky Bell, the UA’s associate athletic director for the CATS Life Skills programs. The program is designed to get students talking about different ways to deal with complicated situations, including whom to talk to and how to report Title IX and other types of incidents.

“It’s been great to have students helping out with these efforts,” Lopez said. “They’re giving us direct input and being empowered to help us reshape these programs.”

Beyond all that, multiple clubs and groups across campus that have been involved in Title IX education and related efforts even during the pandemic. They’re hosting virtual events, like game nights, to get students involved.

“They’re getting it done, and they’re also getting creative ... with really making this something that is social and fun and building relationships with other students,” Lopez said.

The Associated Students of the University of Arizona has also been a strong campus partner for Title IX-related events, taking the reins for the past several years during the UA’s “I Will Week,” an event designed by students to raise awareness about sexual assault and promote consent. Started in 2016, I Will Week has been held in conjunction with Sexual Assault Awareness Month, with students being asked to sign a pledge promising to end rape culture. Like many things in 2020, I Will Week was derailed by the pandemic.

Changes came in May

The changes were handed down in May, two months after UA President Robert C. Robbins delayed students’ return to classes from spring break and moved the campus largely to online instruction because of concerns about the coronavirus.

“The changes are extensive and historic. As far as I know, they’re the only regulations that have been promulgated in the 48-year history of Title IX. We’ve always been guided by federal guidance, administrative directives or case law,” said Tucker, the UA’s Title IX coordinator.

Tucker returned to the position in January, following the departure of former South Tucson Judge and Title IX Director Ron Wilson, who was hired in October 2018 and quickly promoted to the school’s first-ever vice president of equity and inclusion. Tucker previously held the position of Title IX coordinator prior to Wilson’s arrival.

In 2011, President Barack Obama issued a “Dear Colleague” letter that outlined how universities should respond to allegations of sexual abuse, harassment and dating violence. Several years later, Trump promised changes to the way schools investigated and adjudicated such issues, and in May, he delivered.

In response, the Arizona Board of Regents and the state’s three universities created a work group to write and implement a new policy that was in line with the federal government’s.

Tucker spent months participating in webinars and working with ABOR to write policy adjustments that were mirrored at each university.

While Title IX complaints come in “ebbs and flows” based on enrollment factors and other circumstances, Tucker expects to see an influx of complaints as the pandemic subsides.

“Our approach is to keep the door open. When people report doesn’t necessarily tie in to when an incident occurred, in fact probably more likely the opposite,” Tucker said. Research has already shown an increase in domestic and dating violence during the pandemic. “The messaging is just we’re here, we can talk through the process, and people can call us and talk without even giving their name.”

Recent sexual misconduct complaints at the University of Arizona

The Star has previously reported on the number of sexual misconduct violations under the UA student code of conduct have been investigated and upheld each school year. The UA recently fulfilled a public records request for updated information from 2017 and beyond.

Resources at the UA and beyond

For more information about Title IX at the University of Arizona, visit titleix.arizona.edu

For information about or to contact the UA Survivor Advocacy program, visit survivoradvocacy.arizona.edu or call 621-5767

People experiencing domestic violence in Pima County can receive help through Emerge! Center Against Domestic Abuse at emergecenter.org or by calling 888-428-0101. Additional 24/7 support is also available through the National Domestic Violence Hotline at 1-800-799-SAFE (7233).

Sexual assault survivors can contact the Rape, Abuse and Incest National Network, RAINN at 1-800-656-HOPE (4673) any time for help.

The updated policy was approved by regents Thursday. It is intended to be consistent with new federal regulations related to how schools should investigate sexual misconduct.

The University of Arizona has a new hub for services and research related to gender-based violence, thanks to $1.5 million in grant funding.

The Oro Valley police report says four Ironwood Ridge football players were charged with misdemeanors in connection with allegedly sexually abusing their teammate on a team bus following an away game in 2018. 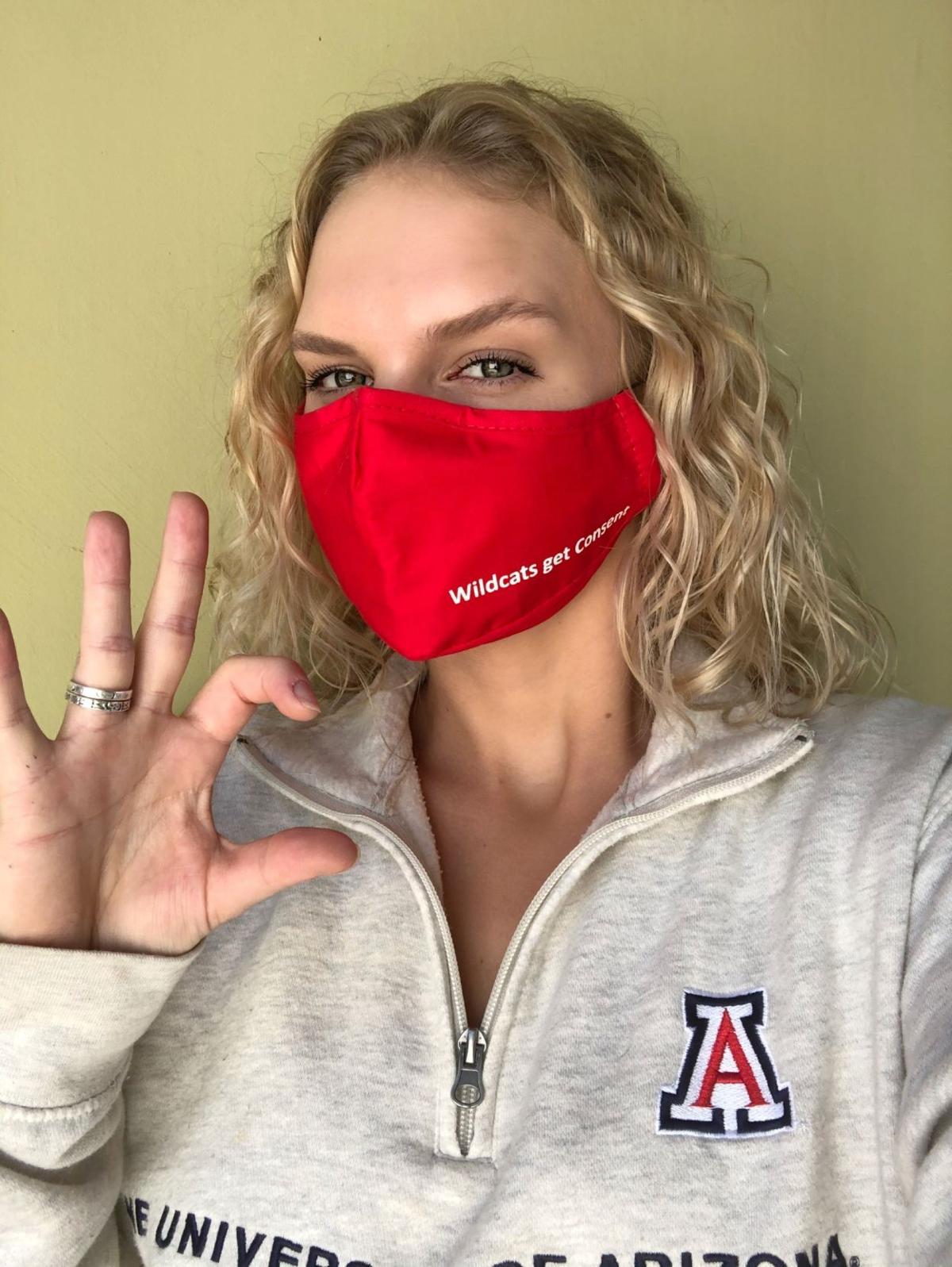 Grace Meyer, a graduate student in educational psychology and a student worker in the UA’s Consortium on Gender-Based Violence, poses in a “Wildcats Get Consent” mask. 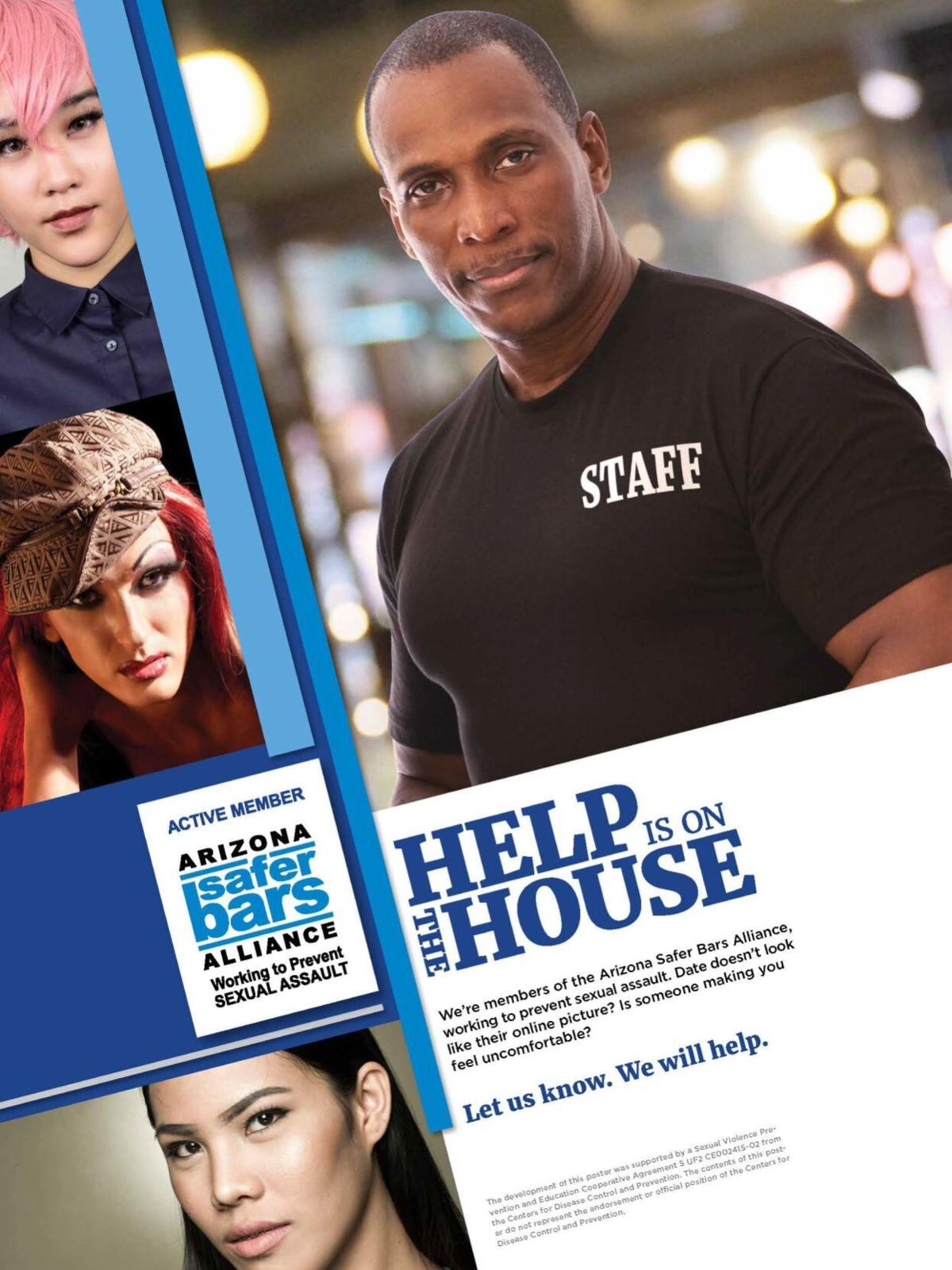 These posters can be found in bars near the University of Arizona that have opted into the Arizona Safer Bars Alliance, a sexual assault prevention program and research project. 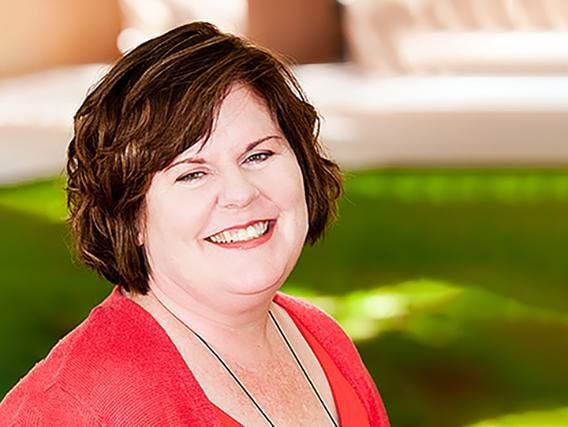 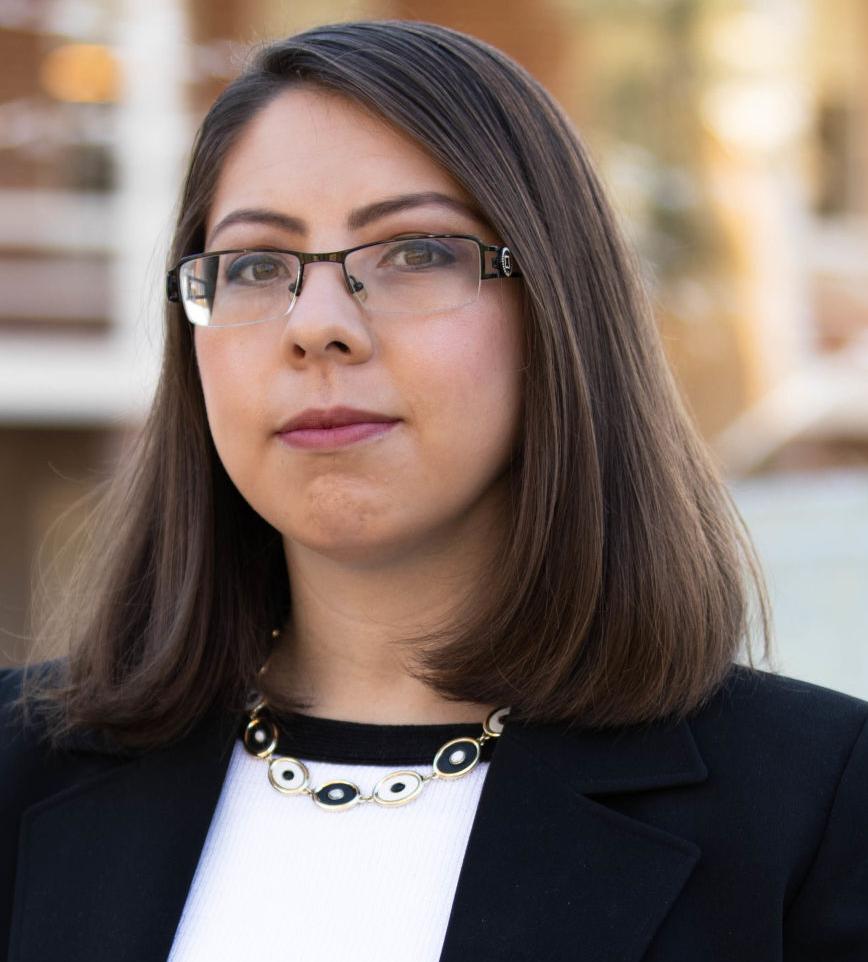 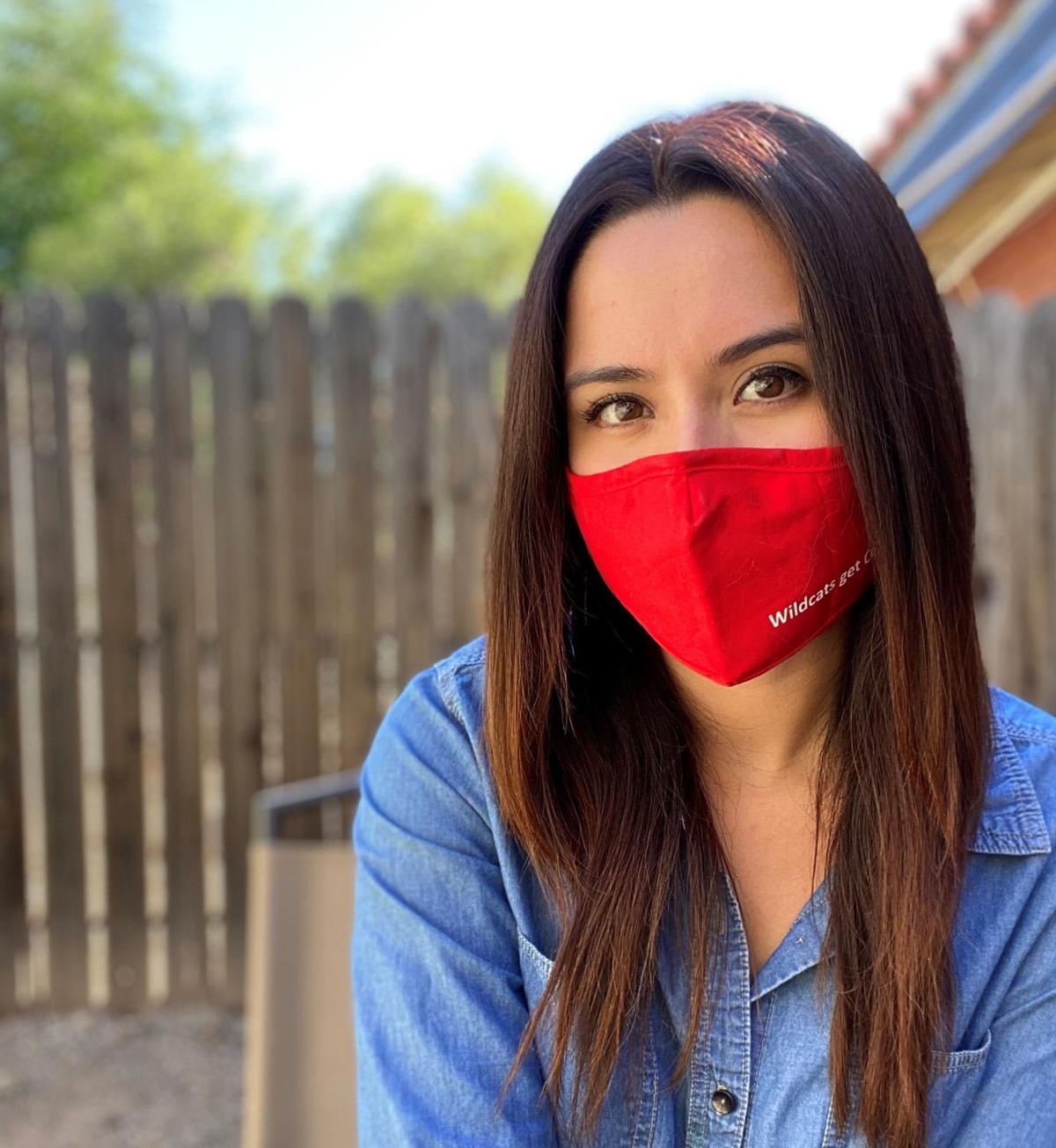