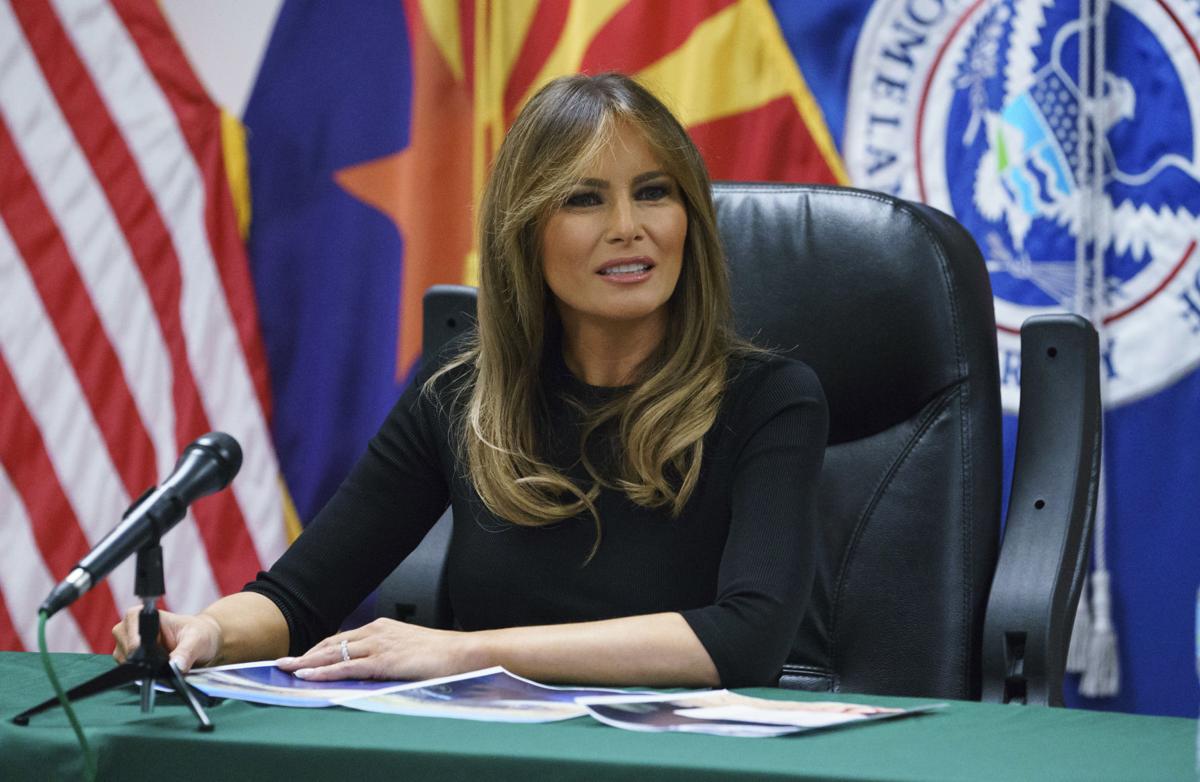 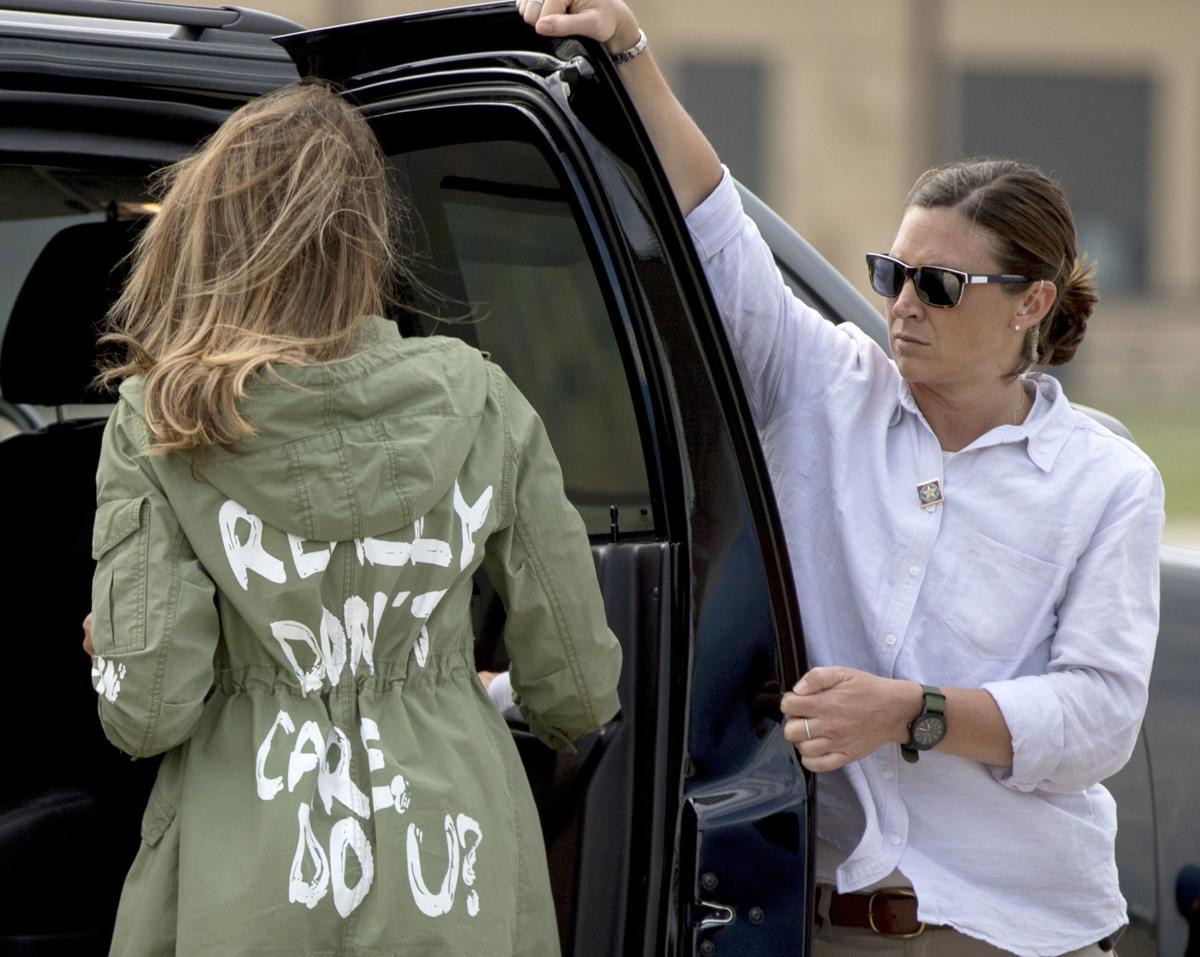 Melania Trump and the Zara jacket that set off a firestorm. “There was no hidden message,” said a spokeswoman.

The first lady arrived shortly before 10 a.m. at Davis-Monthan Air Force Base. Her motorcade took her to the Border Patrol facility, which is adjacent to the base on East Golf Links Road. She was at the center for about an hour, meeting with agents and Customs and Border Protection officials. She then received a tour of the facility, before leaving back to the base for her flight to Phoenix at about 11:30 a.m.

According to The Associated Press, Trump listened to officials talk to her about the facility. She brightened up when a young boy darted out of the room and stared at her.

One young woman inside a room labeled "families" was holding a young child. Just outside the rooms was a cart with baskets of juice, applesauce and crackers.

Trump met with several CBP officials, including Rodolfo Karisch, chief Border Patrol agent for the Tucson Sector, who told Trump he was pleased that she was making time to tour the facility and meet with personnel.

Karisch said Trump would get to meet with front-line Border Patrol agents, tour the center where illegal immigrants are held and learn first-hand about the care that is taken by personnel when dealing with immigrants.

"This is a hard situation for the men and women of the Border Patrol," Karisch said about the work agents do along the border. He said that illegal immigration must have "consequences" for violators and that the issue isn't strictly a Border Patrol problem, it's a "government-as-a-whole problem that we must try to fix."

Trump said she was interested in hearing from agents and others about the situation.

"I know how dangerous and difficult your daily jobs are," Trump said. "I really appreciate all you do on behalf of the country."

She told the officials that "I'm here to support you and give my help on behalf of children and families."

Children who are caught crossing the border illegally on their own and those who were separated from their parents after crossing are housed at facilities in several states. It was believed that Trump would visit one of two shelters in Tucson that house children apprehended at the border, but she did not travel outside the base.

Melania Trump could make a stop in Tucson today. Protesters are currently outside one of the shelters where she is rumored to make a possible visit. Some protesters have been here since last Wednesday. pic.twitter.com/BTsKZzQH24

Mrs. Trump traveled to the border town of McAllen, Texas, last Thursday to meet with law enforcement and social services providers and tour a nonprofit center housing children who were detained under her husband’s policy of prosecuting all illegal border-crossers, The Associated Press reported.

She also met with children at the center, but a stop at a Customs and Border Protection facility was scrapped because of heavy rain and flooding.

The trip was overshadowed by a jacket she wore to and from Texas that said on the back: “I REALLY DON’T CARE, DO U?”

In Tucson, Trump wore a black shirt with white pants.

Protesters line up outside one of the shelters where First Lady Melania Trump is rumored to make a possible visit on Thursday, June 28. Video …

Sarah Gassen: Melania Trump, would you leave your young son at a detention center?

Multiple people have been shot at The Capital newspaper in Annapolis, Maryland.

Officials believe the man died after becoming sick from the heat.

Initial reports said dogs, chickens, a ferret, potbelly pigs and a snake were living at the residence.

The suspect approached a bank teller saying, "Give me the money, and do not push any buttons," a news release said.

Students must have a GPA between 3.6 and 4.0 to be placed on the Dean's List.

The event will help families that simply can't afford everything required for their children.

Today's temperatures will remain hot, but have no fear: there's also a bit of good news to this weather report.

PHOENIX — The outrage sparked by the sights, sounds and stories of children separated from parents at the U.S.-Mexico border underscores the o…

Melania Trump and the Zara jacket that set off a firestorm. “There was no hidden message,” said a spokeswoman.