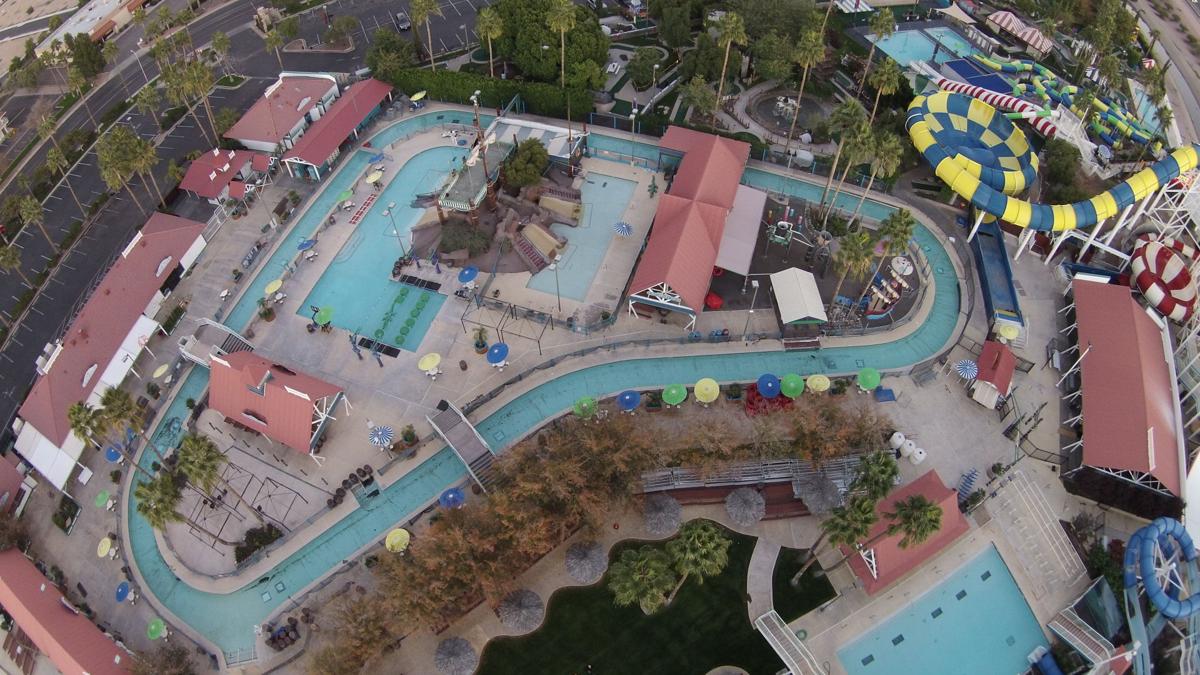 The Sunsplash water park, which is part of Mesa Golfland, has been closed since late June. The facility’s lawyer says it doesn’t have any way of showing that it can operate safely. 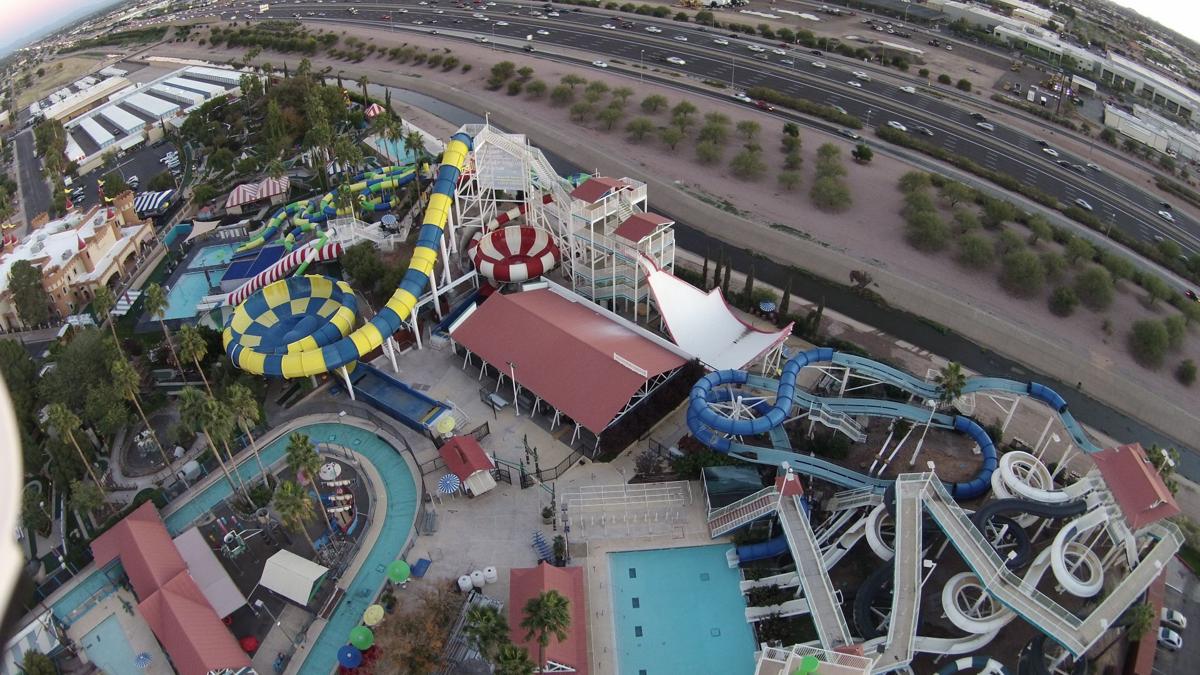 PHOENIX — The owners of a Mesa water park are suing to be allowed to reopen, claiming Gov. Doug Ducey’s policy that keeps it shuttered is discriminatory.

The new lawsuit says hotels and resorts have been allowed to keep open their water slides, rivers for tubing, swimming pools and hot tubs despite the pandemic.

But the Sunsplash water park, which is part of Mesa Golfland, has remained closed since late June, with no opportunity to present evidence to state health officials that it can operate safely, wrote attorney Joel Sannes.

He wants Maricopa County Superior Court Judge Janice Crawford to declare the governor’s policy to be unconstitutional discrimination, allowing not just his client but the owners of other water parks around the state to once again have visitors.

Separately, Sannes told Capitol Media Services that the opportunities Ducey and the Department of Health Services unveiled Monday to allow gyms and fitness centers to petition to reopen does not comply with an order by Maricopa County Superior Court Judge Timothy Thomason requiring the state to provide “due process.”

So Sannes, who represents Mountainside Fitness in that case, is asking the judge to rule that Ducey is violating his order.

There was no immediate response from the Governor’s Office.

All water parks and pools had been closed in March as part of the effort to slow the spread of COVID-19. They were all allowed to reopen in May if they followed certain guidelines.

In late June, however, with a spike in coronavirus cases, the governor reversed course and shuttered many businesses, including water parks. But that order created an exception for “pools operated as part of a public accommodation, such as those at hotels” as long as they enforce certain rules, like keeping groups larger than 10 from congregating in or near the pool.

Sannes said the Sunsplash owners provided the state health department with a safety plan and asked for authority to reopen. But he said neither Ducey nor the department has responded.

In the meantime, Sannes said, other facilities are open.

For example, he said, the JW Marriott Phoenix Desert Ridge Resort & Spa has five pools, a “lazy river,” a water slide and a children’s splash area. And the Oasis at Arizona Grand Resort has a 7-acre pool with three water slides, a wave pool, a lazy river, a children’s pool and a 25-person hot tub.

That isn’t fair, he said.

“It looks to us like the governor’s picked winners and losers,” Sannes said.

The dispute over gyms and fitness centers is at a different stage.

Last week Thomason said Ducey had to at least provide a process for these facilities to be able to show they can operate safely.

That resulted in Monday’s order setting out the conditions under which these establishments and others could reopen. Those are based on the level of COVID-19 infections in each county.

There is a separate process for gyms and fitness centers to petition for permission from the Arizona Department of Health Services to reopen even if the COVID-19 levels have not reached what the state set as a trigger.

Also, if the department denies the request, it goes to the Office of Administrative Hearings.

But Sannes said there is no criteria or standard for the hearing officers to use to determine if the department acted properly in denying a request.

What parents should know about returning to school, according to teachers

Coronavirus spreads across the United States

Coronavirus spreads around the world

Under pressure from a court order, Gov. Doug Ducey agreed Monday to provide a "roadmap'' to eventually allow not just gyms and fitness centers to reopen but also movie theaters, water parks and some bars.

Governor is arguing that forcing Arizona to let fitness centers reopen before he and health officials believe it is appropriate could result in "death, serious physical illness, and a lack of hospital beds.''

Arizona must have process in place Tuesday that would allow for fitness centers to seek approval to reopen for business.

Dr. Cara Christ says Arizona has kept fitness centers closed despite recommendations that they could open with certain precautions.

Arizona Gov. Doug Ducey said that, unlike his hard-and-fast rules for business reopenings during COVID-19, he has no interest in making the safety guidelines for schools mandatory.

Jobless Arizonans to get $300 a week in federal benefits, governor says

Gov. Doug Ducey agreed today to accept a federal offer of an extra $300 a week in unemployment benefits for jobless Arizonans, to replace the $600 payments that expired at the end of last month.

Jobless Arizonans will get $300 weekly boost from feds, Ducey says

Gov. Doug Ducey accepted a federal offer of an extra $300 a week in unemployment benefits for more than 370,000 Arizonans out of work, to replace the $600 payments that expired July 31. But he won't add a $100 state match, although he has money available.

Court filings indicate 258 fitness centers have applied to reopen out of about 900 statewide. There also are 95 applications by businesses licensed as bars to be allowed to bring customers inside, and five from movie theaters.

Transfer of the lawsuit to federal court leads water park's attorney to claim: "It's another example of the state playing games with people who are being damaged by closures." Governor's Office says the transfer is routine.

Bar owners seek legislative help to reopen, but lawmakers say there is little they can do

House Speaker Rusty Bowers, R-Mesa, said there have been no real concessions to get the hundreds of businesses now closed reopened, or to allow those that can operate to have more customers inside or operate the way they were before.

State Health Director Dr. Cara Christ said Monday she is sending inspectors to certain resorts to find out how they are operating their water features during the pandemic. Those operating in an unsafe fashion will face orders to close, she said.

Pima County close to meeting metrics for gyms, theaters, some bars to reopen

Arizonans waiting to get back into exercise routines in gyms during the pandemic may not have to wait much longer, state data shows. Same if they're hoping to go to theaters, and even to some bars.

The Sunsplash water park, which is part of Mesa Golfland, has been closed since late June. The facility’s lawyer says it doesn’t have any way of showing that it can operate safely.