Bright orange sparks bounced off the pavement as a U.S. Army soldier welded metal bars to the border fence in downtown Nogales on Thursday morning.

The camouflaged soldier, one of about 1,500 deployed to Southern Arizona to prepare for the possible arrival of a large group of Central American migrants, then hung spools of razor-sharp concertina wire on the metal bars. The wire is meant to slow down anyone who tries to climb the fence and now extends for several hundred feet on either side of the downtown port of entry, as well as a stretch near the commercial port on the west side of the city.

“We want to make sure the people come through in a peaceful manner, and we will gladly process them” at a port of entry, said Teresa Small, a spokeswoman for Customs and Border Protection.

Shipping containers now block two of the six inbound vehicle lanes inside the downtown port, where CBP conducted “tactical training exercises” earlier this week, and one of the eight inbound commercial lanes at the west-side port.

Whether the troops put up more concertina wire, barriers, or any other kind of deterrent “depends on what evolves from the caravan situation,” Small said.

The soldiers in Nogales, all of whom were unarmed except for military police, are scheduled to stay until mid-December, Army First Sgt. Jeremy W. Bunkley told reporters Thursday. “But we’re here as long as necessary to support Customs and Border Protection,” he said.

The troop deployment and lane closures came after President Trump railed against the caravan of migrants and cast them as invaders and criminals. Media reports from the Mexico-Guatemala border showed some migrants breaking down a barrier to cross that border and Mexican police in riot gear trying to stop them.

“Fortunately or unfortunately, the president decided to send the military to the border,” said Manuel Ruiz, a Santa Cruz County supervisor whose district includes Nogales. “Personally, I think it was politicized to use them down here.”

Ruiz said he had great respect for the soldiers, but hanging concertina wire on the border fence creates a bad impression for Mexican shoppers who “spend money here and make our economy strong.”

Mexican shoppers provide the bulk of the sales tax revenue that supports the Nogales, Arizona, city government, with much of that revenue coming during the Christmas shopping season. Earlier this week, the Nogales City Council voted to halve the $1,000 annual bonus for city employees due to the uncertainty created by the situation at the border, the Nogales International reported.

Ruiz said he hopes there won’t be a “big incident” like a shooting at the border “that blows this whole thing out of proportion.”

For the multibillion-dollar produce industry in Santa Cruz County, the lane closures “couldn’t have come at a worse time for us,” said Jaime Chamberlain, owner of a local produce company.

The produce industry is ramping up for the peak winter months when more than 1,000 trucks cross the border in Nogales every day loaded with tomatoes, cucumbers and a cornucopia of other fruits and vegetables that end up on dinner tables around the United States.

In the coming weeks, those trucks will carry not only produce, but electronics and other goods made at assembly plants in Nogales, Sonora, to meet the demands of Christmas shoppers in the United States.

The lane closures occurred earlier this week and Small said they have not led to a reduction in services by CBP or had any impact on trade.

Small said CBP is in constant dialogue with the produce industry, a thought Chamberlain echoed.

Chamberlain also said the current situation brings attention to a chronic shortage of customs officers at ports of entry in Arizona.

“We are extremely understaffed for everyday business,” he said of CBP staffing at Nogales ports. “You add asylum seekers and you’re adding that much more pressure to the officers we already have.”

To help prepare for the possible arrival of the caravan in Arizona and California, CBP is sending customs officers from West Texas and New Mexico. Small said the number that will come to Nogales is not set and will adapt to circumstances.

U.S. Rep. Raúl Grijalva, D-Ariz., called for an investigation of the lane closures and the hanging of concertina wire.

“Treating Nogales as a war zone because of a manufactured crisis from the Trump administration is nothing short of an outrage,” Grijalva said.

While federal agencies prepare for a caravan of migrants and a potential confrontation in Nogales, other groups of migrants, many of whom are families traveling in groups of 100 or more, have turned themselves in to Border Patrol agents near Lukeville, said Agent Felipe Jimenez, a spokesman for the agency’s Tucson Sector.

The destination of the caravan appears to be the Tijuana-San Diego area. Hundreds of migrants from the caravan started arriving there this week without incident, the New York Times reported Thursday.

But Jimenez said the last time a large group of migrants went to California, “we saw splinters here.”

As soldiers hung concertina wire near the commercial port on Nogales’ west side on Thursday, three men sat on a hill in Mexico and watched the action below. Within minutes, another man in Mexico ran to a portion of the fence where soldiers hadn’t yet installed the concertina wire and went over it. He then rushed across a road on the U.S. side of the fence and hid in the brush. Moments later, a Nogales police vehicle barreled down the road toward him.

“Hence the concertina wire,” Jimenez said as he watched the man slowly climb the fence with exhausted arms back to Mexico.

The impact of Biden's infrastructure bill

The impact of Biden's infrastructure bill

'Trump era' rolls on at Tucson's federal court, even with AG Jeff Sessions out

Indictment says he took $6,000 to allow someone to enter illegally from Mexico.

The U.S. military is building a bridge over the Santa Cruz River near the Mexico border, spurring objections from environmentalists who say mo…

After the latest round in a long-simmering political fight, tomato importers in Nogales and Rio Rico are leaving an industry worth hundreds of millions of dollars every year. 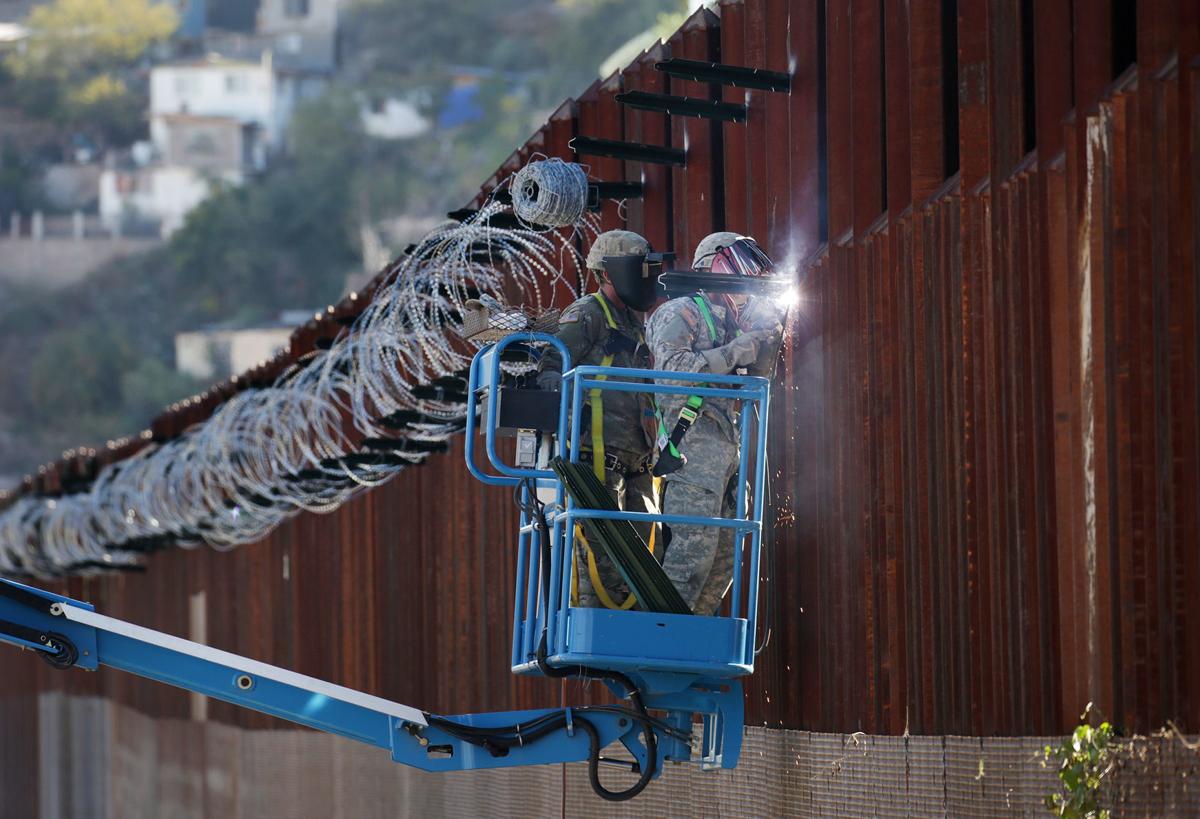 U.S. Army troops weld steel pickets to install razor wire atop the U.S.-Mexico fence west of the DeConcini Port of Entry in Nogales. 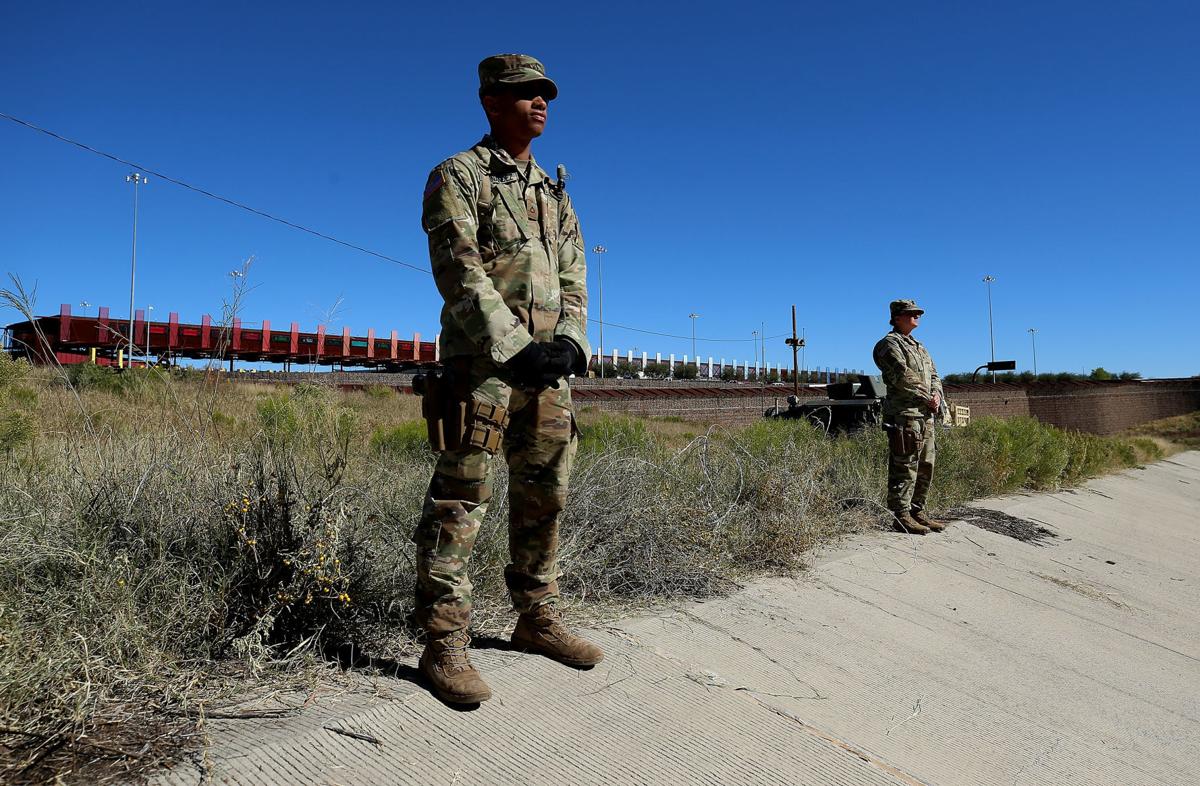 Military police stand guard near the Mariposa Port of Entry as Army personnel string up razor wire atop the border fence west of Nogales. 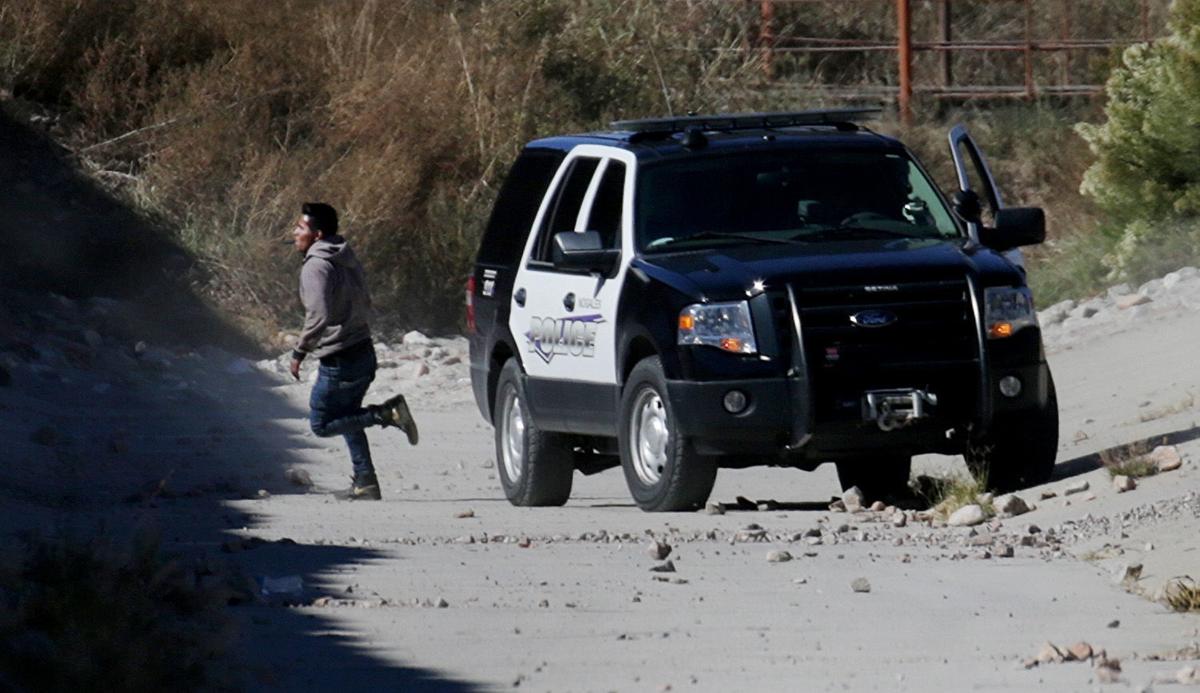 An illegal alien flees back toward the U.S.-Mexico fence after a Nogales Police Department officer spots him west of the Mariposa Port of Entry, Nov. 15, 2018, in Nogales, Ariz.