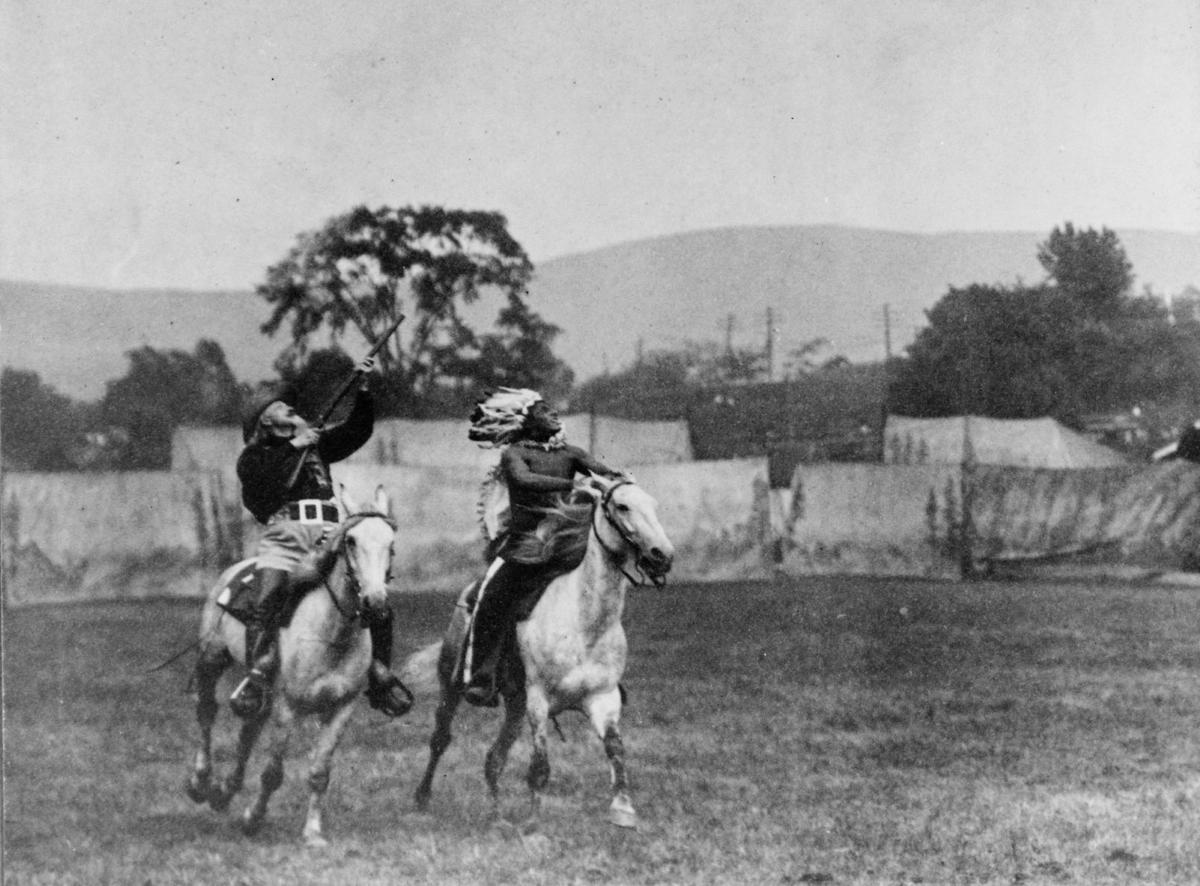 William F. Cody, aiming a rifle in a 1907 traveling show, invested in the Campo Bonito and Southern Belle mines. 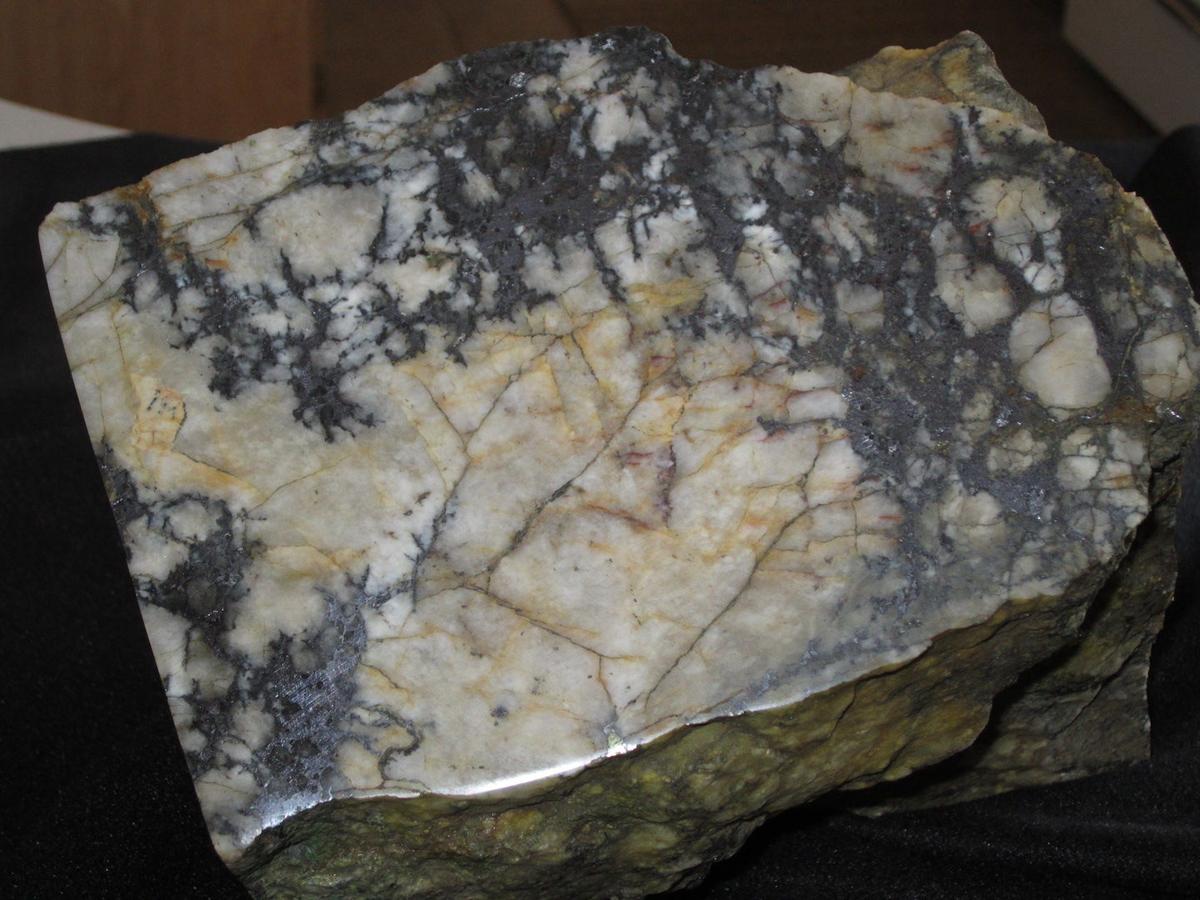 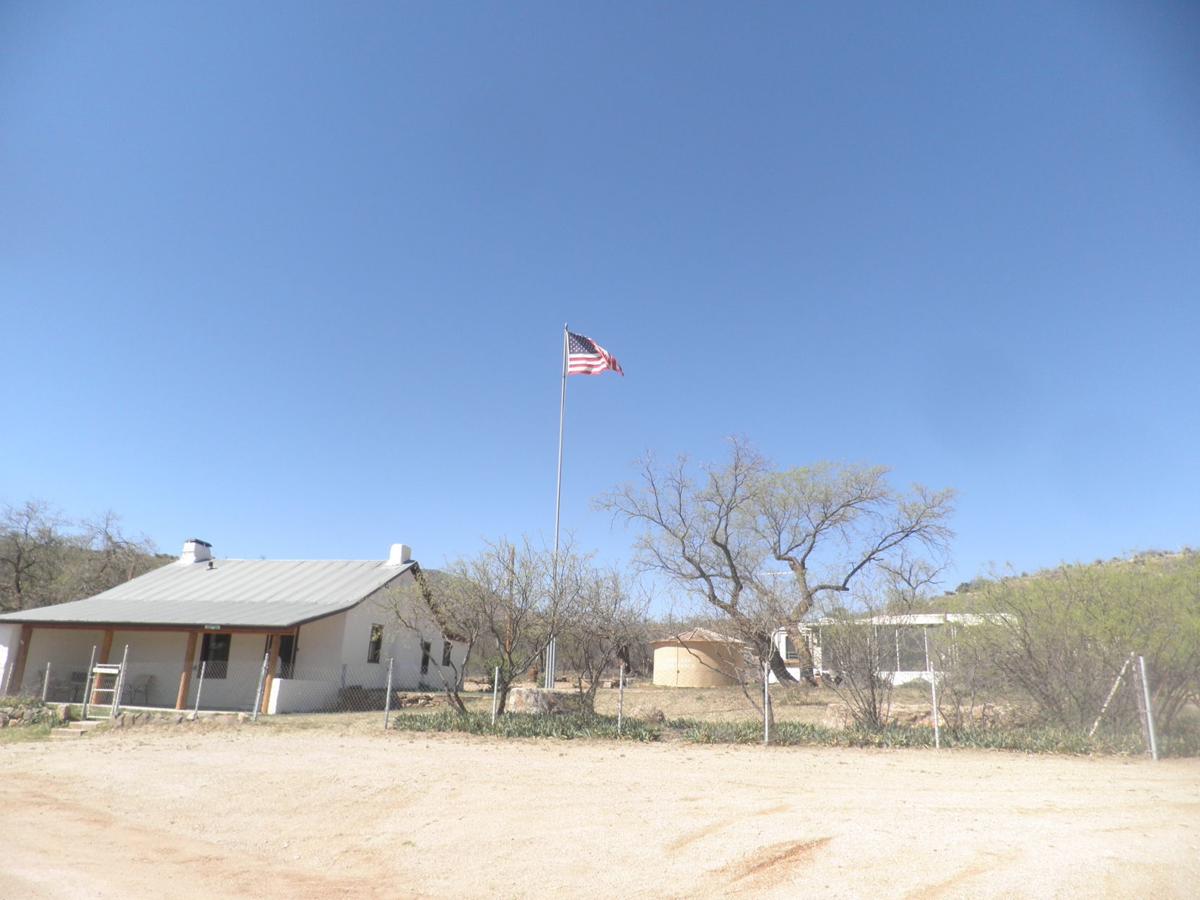 The home of miner and rancher Isaac Laurin, discoverer of what would become the American Flag Mine, was built in 1877 and later served as a post office. 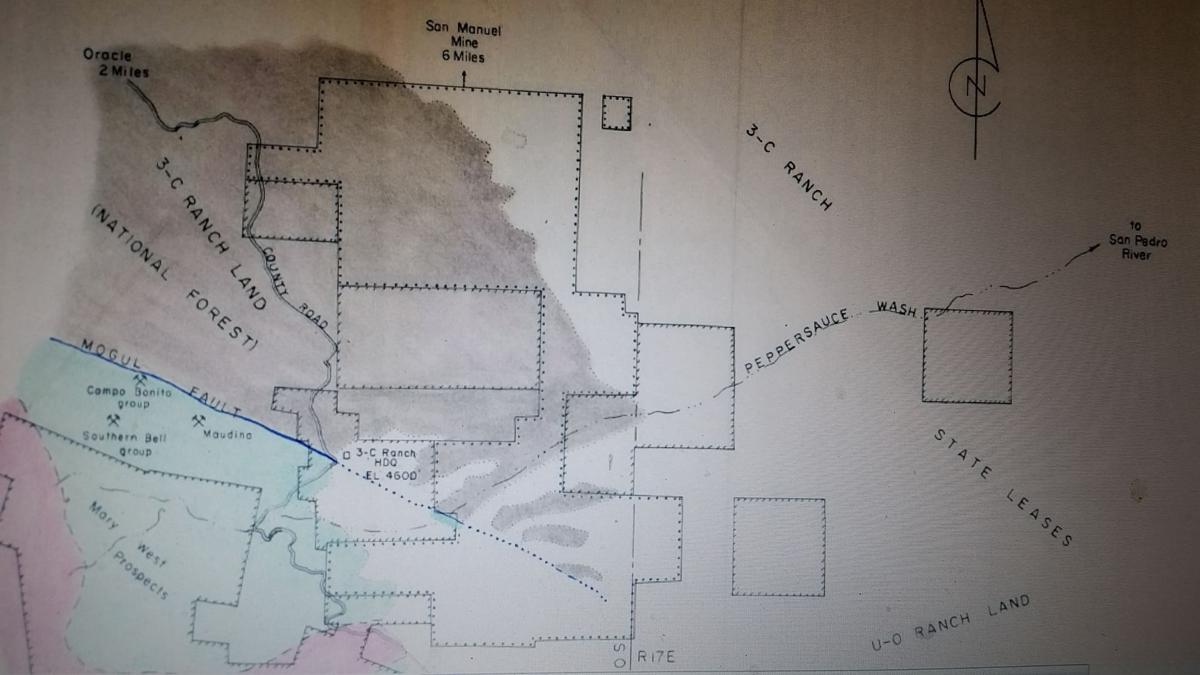 Location of Campo Bonito and Southern Bell mine sites. 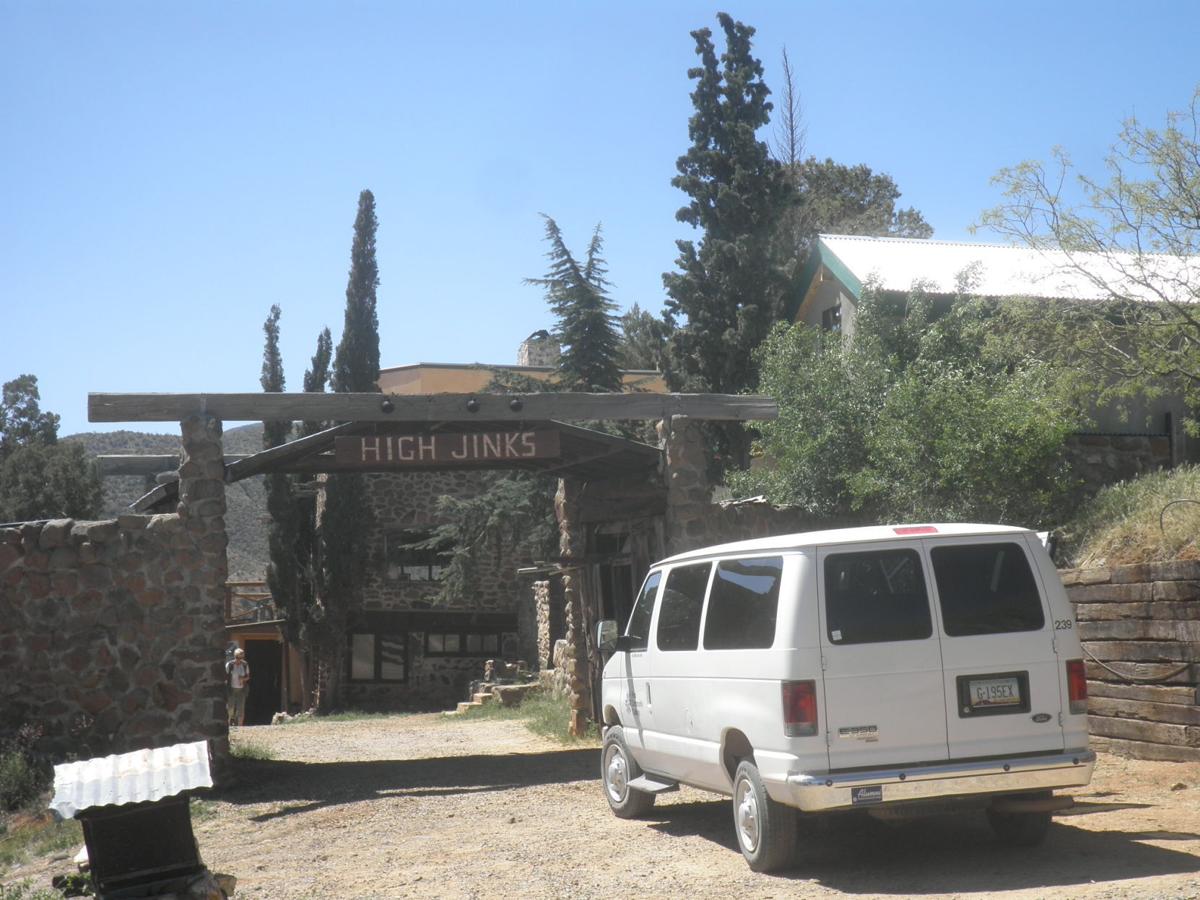 The northeastern slope of the Santa Catalina Mountains has a long history of sporadic gold production.

The country is rugged, cut by deep canyons including Southern Belle, Campo Bonito and Pepper Sauce, all running parallel and eastward to the San Pedro Valley.

Located at the northern end of the Santa Catalina Mountains, the town of Oracle was founded in 1880. It was christened after the nearby Oracle Mine, so named by its claimant, Canadian prospector Albert Weldon, who sailed around Cape Horn on a ship named “The Oracle” in 1875.

The area was a focal point for mining and ranches including Acadia and American Flag. With prominent outcrops of rounded granite and gold bearing sediments, the area has drawn prospectors in search of mineral wealth similar to other areas in the Santa Catalina Mountains including the Iron Door Mine and lost Nine Mile City (Nueve Milla Cuidad).

The earliest mining ventures around Oracle date to George B. Brajevich and John Ivancovich, who prospected five miles southeast of the town in the Catalinas during the 1870s. Both are credited with having discovered the Apache Girl vein and were the first to exploit the area through placer mining.

Mines including Southern Belle, Cody Dyer and Campo Bonito produced gold along with scheelite, an ore of tungsten used to harden steel, and for X-rays and manufacture of lamp filaments.

The renowned Southern Belle gold mine was prospected by C.G. Gillete and Capt. J.J. Young. The mine was christened after Gillete’s wife from Virginia, who spotted free gold on a ledge of rocks while delivering lunch to the prospectors.

Free-milling gold ore was valued at the time at $8 per ton. Noted production between 1881 to 1906 included over 18,000 short tons of auriferous quartz valued back then at more than $1 million.

A 1906 report by Arizona Territorial geologist William P. Blake surmised the Southern Belle vein to be 5 feet in width and an estimated $300,000 in tonnage. The property included a ten-stamp gold mill servicing the Southern Belle and Morningstar group of mines. The gold was amalgamated on plates.

Cody was persuaded by William “Curly” Neal, former military scout and mutual friend, to join him on the quest for the Iron Door Mine.

The Maudina Tungsten Mine, named by a Mexican prospector, was one of the area’s earliest gold mines, encompassing 29 patented claims at Campo Bonito. Broken down by three workings including the Cody tunnel, Pure Gold working and Old Maudina Mine, mining operations from 1908 through 1944 yielded 17,700 short-ton units, or stu, of tungsten trioxide.

The Old Maudina Mine consisted of an ore shoot up to 15 feet in width and over 50 feet in dip length along a steep-dipping fault. The ore is comprised of scheelite in quartz gangue below the 100-foot level. Lead carbonate and wulfenite are also found at the upper 50 feet of the ore shoot.

Development included a multilevel 175-foot shaft comprising 1,000 feet of crosscuts and drifts. Ore was transported by an 18-inch gauge track running 6,000 feet from the mine to the mill at Campo Bonito.

William Cody, along with his partners Col. L.W. Getchell and Capt. John D. Burgess, acquired mines in the area including the Campo Bonito mines and the Southern Belle gold mine.

The High Jinks Ranch, built by Cody’s foster son Jimmy Baker in 1928, is on one of Cody’s gold mine claims.

In 1910, they invested $600,000 in the formation of the Campo Bonito Mining and Milling Co. Carloads of tungsten were shipped as far as Germany.

A partnership between Cody and Thomas Edison led to tungsten from Campo Bonito used directly for Edison’s incandescent electric lights.

The mine would operate sporadically through the remainder of the decade. However, the cost of production far exceeded the value of the metals produced.

While ore from the Southern Belle Mine played out by the 1930s, the Pure Gold deposit, discovered by Edward H. Molson and E.J. Ewing, along with the Morningstar Mine, were both active during World War II, producing fine-grained scheelite in quartz averaging 1.6% tungsten.

Mining declined postwar. Nicor Mineral Ventures assessed the property in the late 1980s, reporting 10,000 tons of mineral on the mine dumps.

Modern-day prospectors included the late Flint Carter, who sought out the lost Iron Door Mine of legend.

Flint promoted Buffalo Bill Cody’s affiliation with the mines in the Santa Catalina Mountains by naming rock containing gold and silver veins embedded in quartz as Cody stone. He personally cut, polished and fabricated the stones as jewelry.

The Campo Bonito Mines are now part of Coronado National Forest. While the area may not have had significant economic importance, it did have a solid reputation in Arizona mining history as being one of the few reliable tungsten producers in the state and a sporadic gold producer in the Santa Catalina Mountains.

William F. Cody, aiming a rifle in a 1907 traveling show, invested in the Campo Bonito and Southern Belle mines.

The home of miner and rancher Isaac Laurin, discoverer of what would become the American Flag Mine, was built in 1877 and later served as a post office.

Location of Campo Bonito and Southern Bell mine sites.