Glen Canyon has a history of prospectors seeking gold dust deposited in the coarse and fine gravels in its narrow steep walls. Gold mining in the canyon reached a zenith from 1883 to 1912; the canyon had been explored by Native Americans and Spanish explorers much earlier.

Geographically, Glen Canyon extends 169 miles southward from the mouth of the Dirty Devil River in Utah to Lee's Ferry in Arizona. Lee’s Ferry is considered the line of demarcation between the upper and lower basins of the Colorado River.

Francisco Atanasio Domínguez and Silvestre Vélez de Escalante, both Franciscan friars, were mapping a route between Santa Fe, New Mexico, and Monterey, California, to establish a series of missions and settlements. They were the earliest Europeans to explore the Green River and the first to reach what would later become Lee's Ferry on the Colorado River.

Both are acclaimed as the earliest explorers to document Glen Canyon in 1776, crossing a ford later known as ”El Vado de los Padres” or “The Crossing of the Fathers.”

Early mining ventures included those of James Merrick and Ernest Mitchell, who prospected for silver nearby in Monument Valley and the Navajo Mountain region. It was their intention to discover a hidden silver mine known only to the Navajo in their jewelry trade. They met their fate by Navajo Indians in early 1880, and samples of silver ore were uncovered on their remains.

Their ventures inspired Cass Hite, a Montana and Colorado prospector who actively searched for what became known as the Merrick-Mitchell Mine. With the assistance of a Navajo chief known as Hoskininni (an anglicized version of his name was Hush-Kaaney), Hite was credited with having discovered placer gold on both sides of the Colorado near Dandy Crossing in the upper part of Glen Canyon in 1883.

A subsequent gold rush involving several hundred miners resulted, with placer mining in the canyon. Wright Bar was a notable site for placer gold found in low sand bars rather than in gravel terraces.

Hite would go on to solicit capital from inventors for mining operations in the canyon including the formation of the Denver, Colorado, Canyon and Pacific Railroad Co. By decade’s end, Robert B. Stanton was involved in surveying a water-grade railroad route for that railroad company that would connect Grand Junction, Colorado, to the Gulf of California. During the survey, Stanton staked out five placer claims (two in Kane County and three in San Juan County, Utah). However, the venture proved unsuccessful because of a lack of capital from investors.

But the Hoskaninni Mining Co., founded by Stanton in 1897 and headquartered in Glen Canyon, proved to be the largest gold mining venture to extract profit from the Glen Canyon gold field. He was also the first after John Wesley Powell to navigate the water from Green River, Utah, through the Grand Canyon while conducting a railroad survey.

A civil engineer with a mining background, Stanton, inspired by a visit to the gold dredging operation around Bannack, Montana, invested in a dredge to process the large volume of sand and gravel for powdery gold in Glen Canyon. Consisting of 82 buckets, the 180-ton dredge was built by the Bucyrus Co. of South Milwaukee, Wisconsin.

By 1899, Stanton filed 145 claims up and down Glen Canyon with the intention of mining them with a fleet of dredges. Stanton viewed Glen Canyon as a gold-lined sluice box.

The dredge began operation in March 1901 and did not work well. Challenges included variable water levels causing the large craft to sink in the water, and mechanical issues due to the inability of the dredge’s sluicing and amalgamating machinery to capture the fine particles of gold. Silty river water damaged the pumping equipment while supply points were few and poor roads hindered transportation at mining claims.

Lack of metal recovery curtailed the ability to fund the operation, and the dredge was abandoned. Stanton’s company went into receivership.

From 1909 to 1912, Charles H. Spencer attempted to recover gold from the Chinle shale at Lee's Ferry by sluicing. His American Placer Corp. invested in equipment including a pneumatic pipe dredge to extract gold from the sand and gravel beds to amalgamating tables nearby the Paria River.

Spencer powered his machinery with coal mined from a prospect on a branch of Warm Creek. Transportation of the coal was by mule train. However, for greater efficiency, he went on to construct a steamboat measuring 92 feet long and 25 feet wide, propelled by a steam-driven, 12-foot rear paddlewheel to transport coal from the mouth of Warm Creek, 27 miles upstream.

Christened the “Charles H. Spencer,” it was the largest boat to operate at Glen Canyon. It proved a failure, however, due to lack of power, and conducted only five trips upstream.

Issues involving the cost of mercury necessary to operate the amalgamator exceeded the value of gold retrieved, causing investors to withdraw support, and Spencer’s mining operations were shut down.

Intermittent mining periods followed, including oil prospecting and drilling during the 1920s followed by some uranium claims staked in Glen Canyon during the 1950s. Uranium deposits proved too low, and no prospects developed.

With the culmination of gold mining operations in Glen Canyon, it became apparent that the richer gold deposits were found in the lateral gravel terraces above the high-water level. Excessively fine gold was recovered in California Bar, Castle Butte Barr, Hite, Good Hope, Gretchen Bar, Klondike Bar, Moquie Bar and Ticaboo Bar — however, not enough to ensure sustainable mining.

Glen Canyon became part of a major Colorado River Storage Project through congressional approval to ensure equitable distribution of the river’s water to seven states in the Colorado River Basin. Authorized in 1956 and built by the U.S. Bureau of Reclamation, Glen Canyon Dam flooded Glen Canyon in 1963 with the reservoir water of Lake Powell.

Remnants of the early mining ventures in Glen Canyon include a rusting gold dredge in the Colorado River at Mile 121.5 above Lee's Ferry and the visible boiler of the sunken steamboat Charles H. Spencer near Lee's Ferry.

Today, Glen Canyon is renowned for 1.25 million acres accessible to the public through the Glen Canyon National Recreation Area for water-based and backcountry recreation in Arizona and Utah. 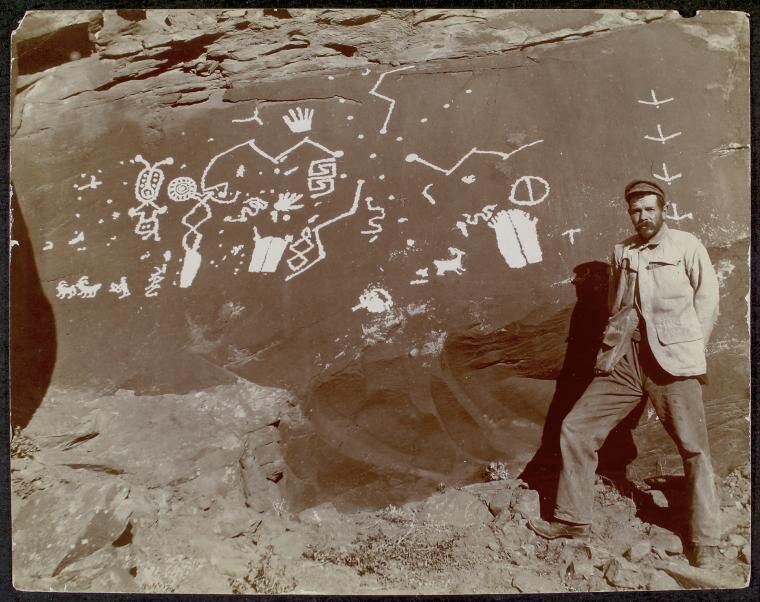 Robert Brewster Stanton, with ancient petroglyphs in Glen Canyon circa 1893, founded the Hoskaninni Mining Co. in 1897, and it became the largest gold mining venture to extract profit from the Glen Canyon gold field. 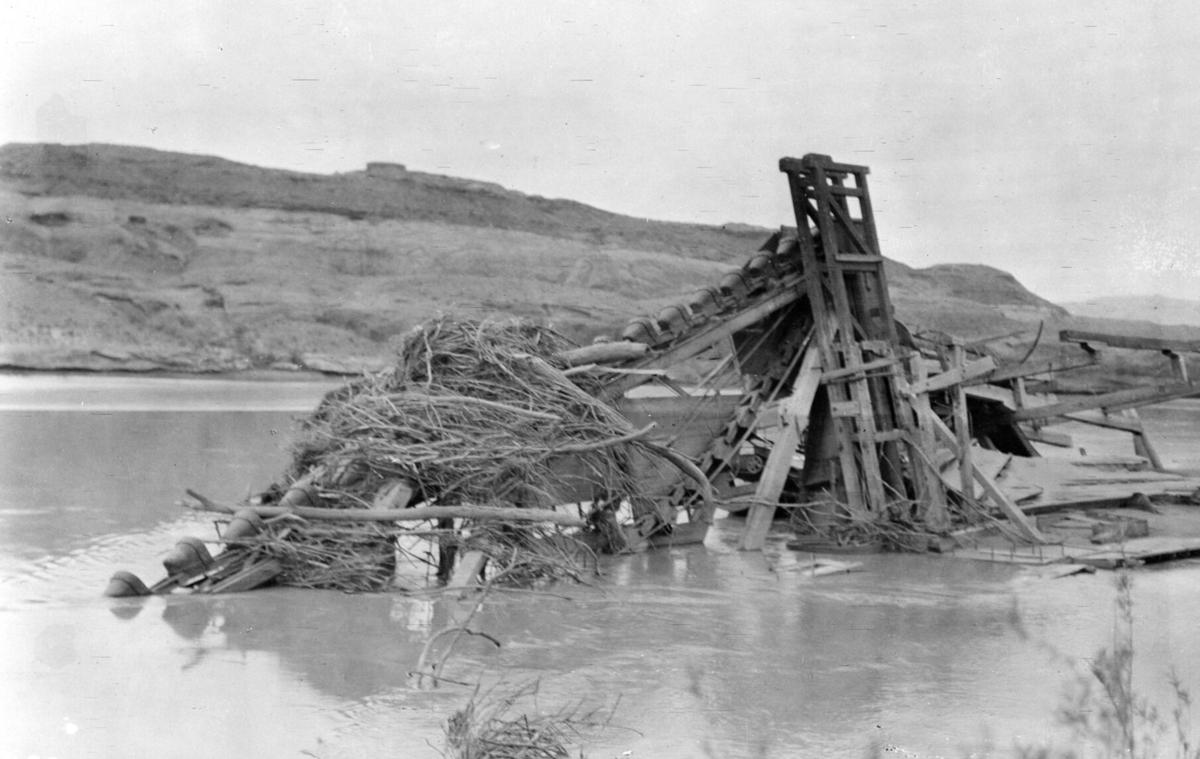 The remnants of Robert B. Stanton’s gold dredge on the Colorado River near the mouth of Hanson (Pine Alcove) Creek, circa 1915. 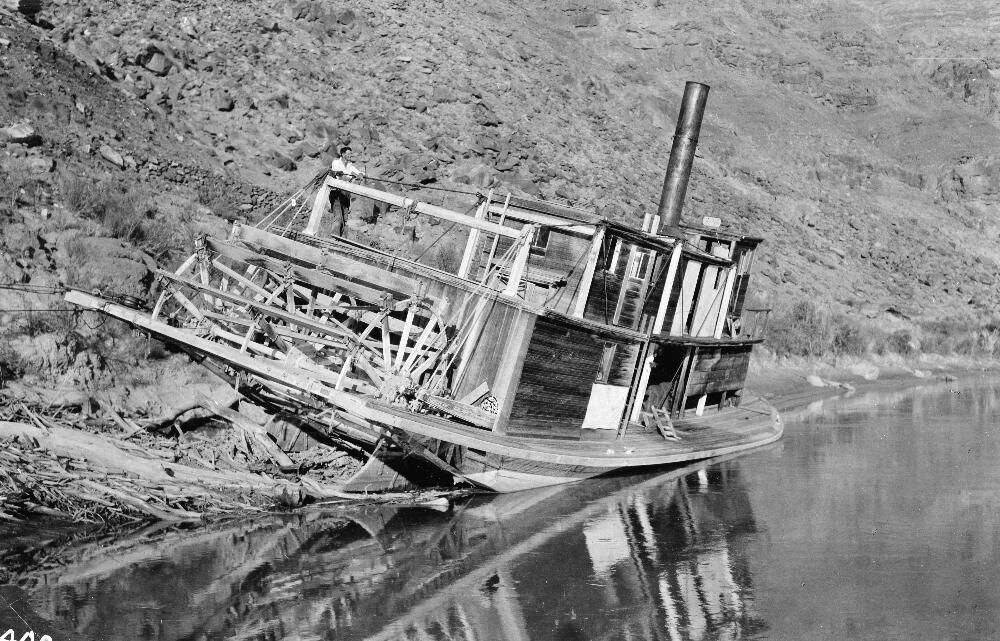 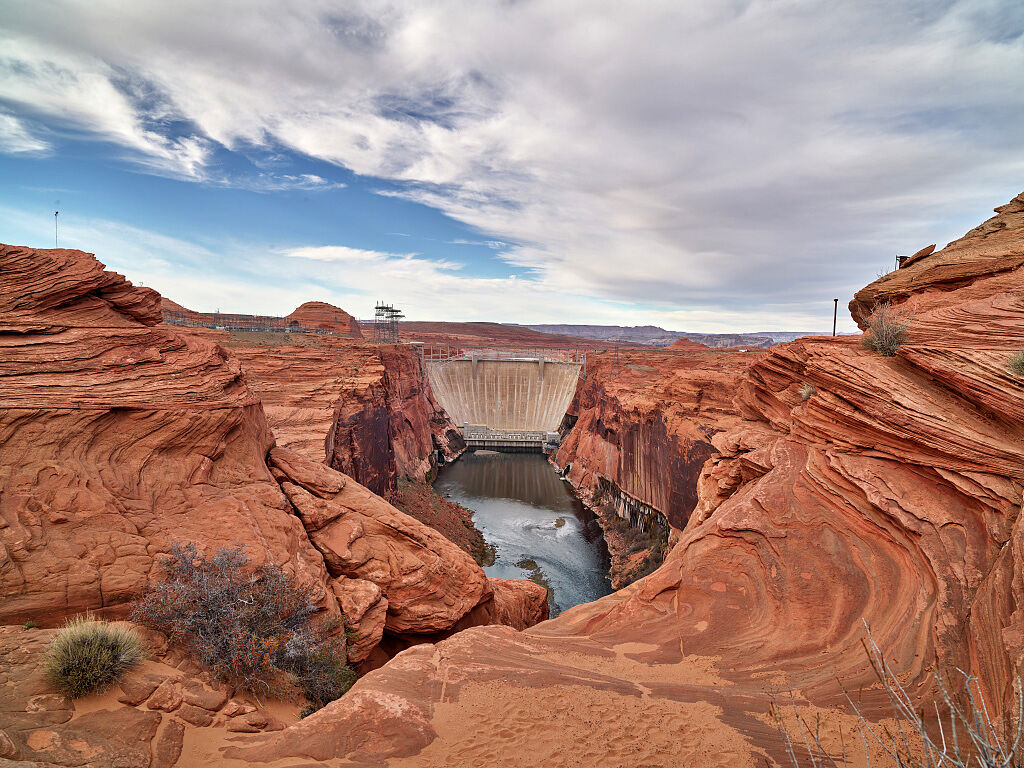 Glen Canyon Dam on the Colorado River, outside Page, Arizona. 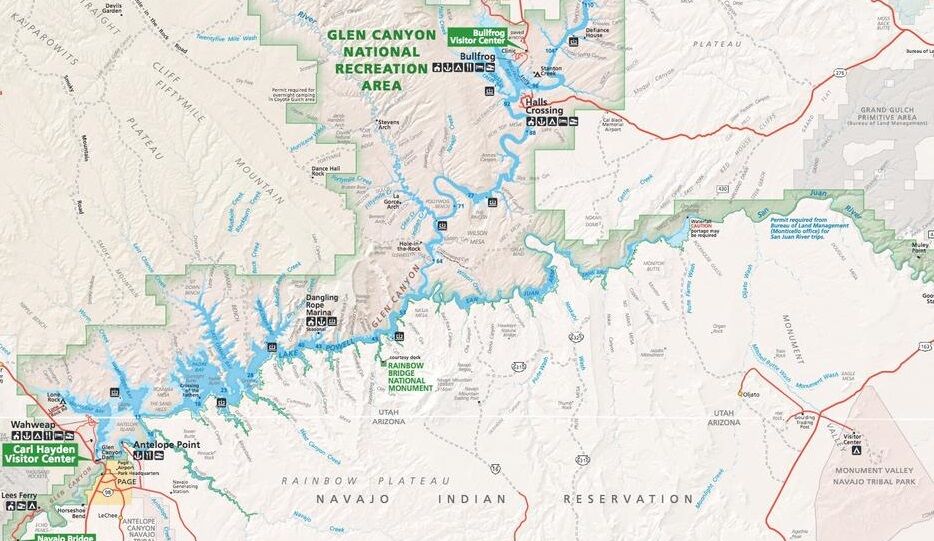 Map of the Glen Canyon area.