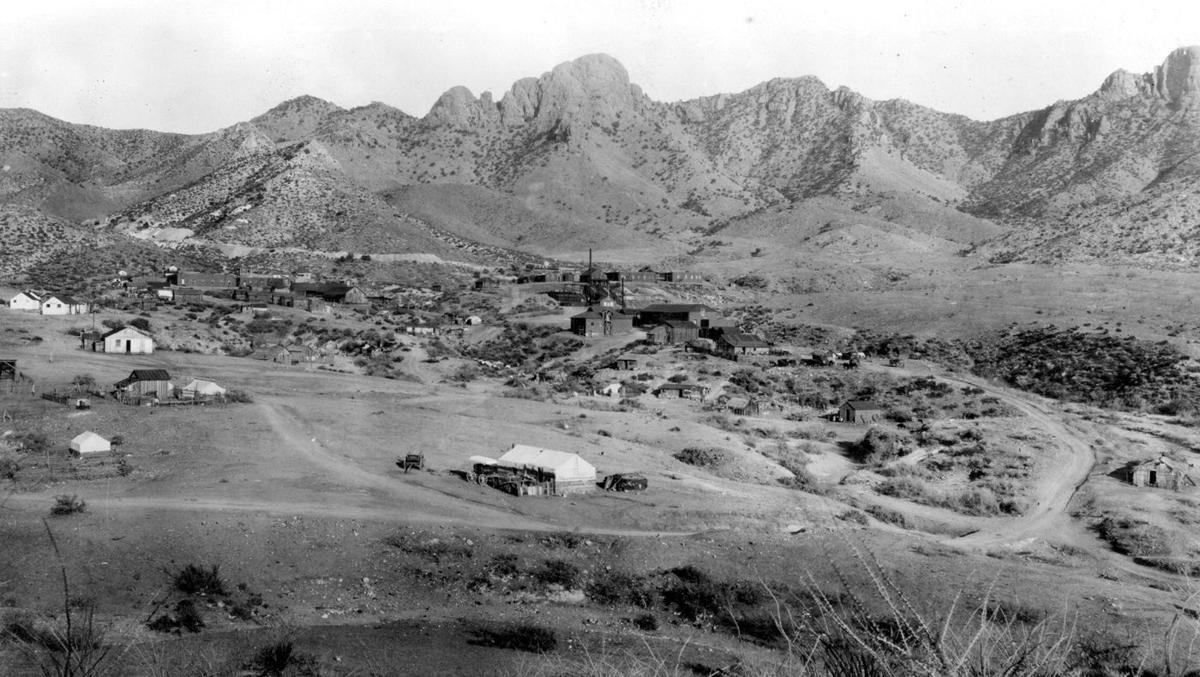 Helvetia as it appeared in 1909 with the smelter as the centerpiece, railroad bend around the Old Dick Mine with Hart’s Butte and Weigles Butte in the distant background. 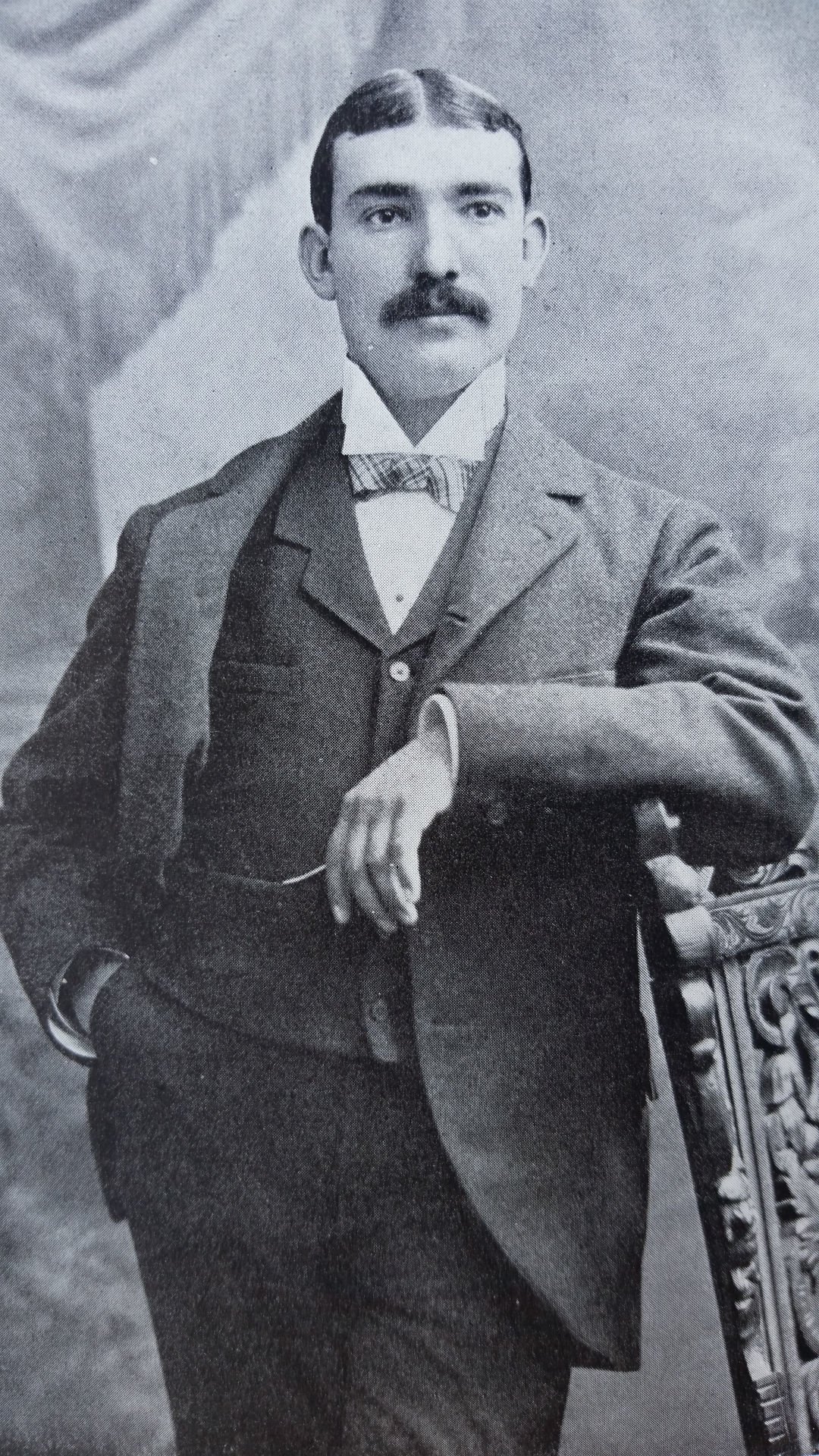 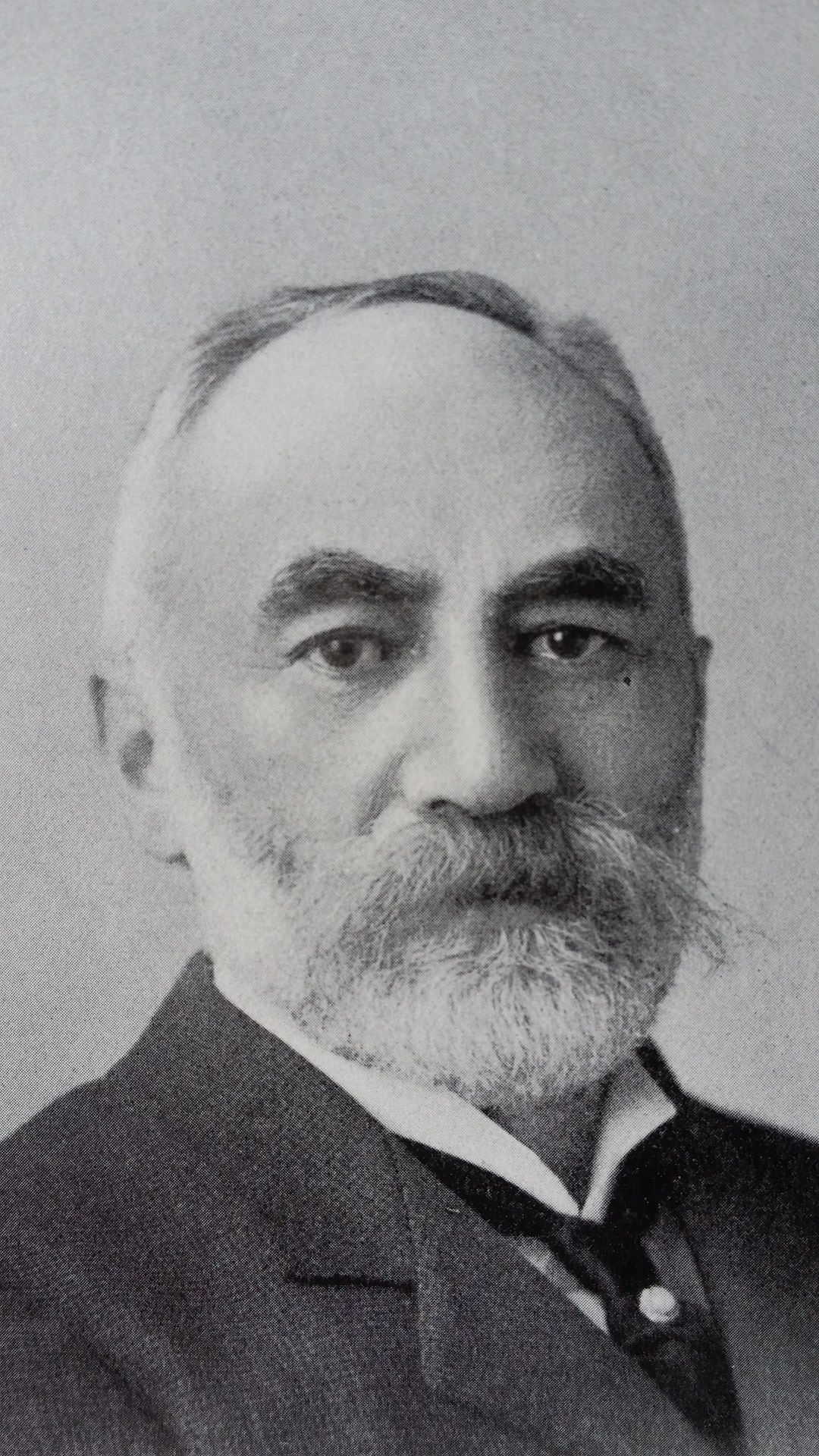 Louis Zeckendorf, financially backed Territorial Arizona mining industry including the Copper Queen Mining Co. and the Omega Mine in the Santa Ritas. 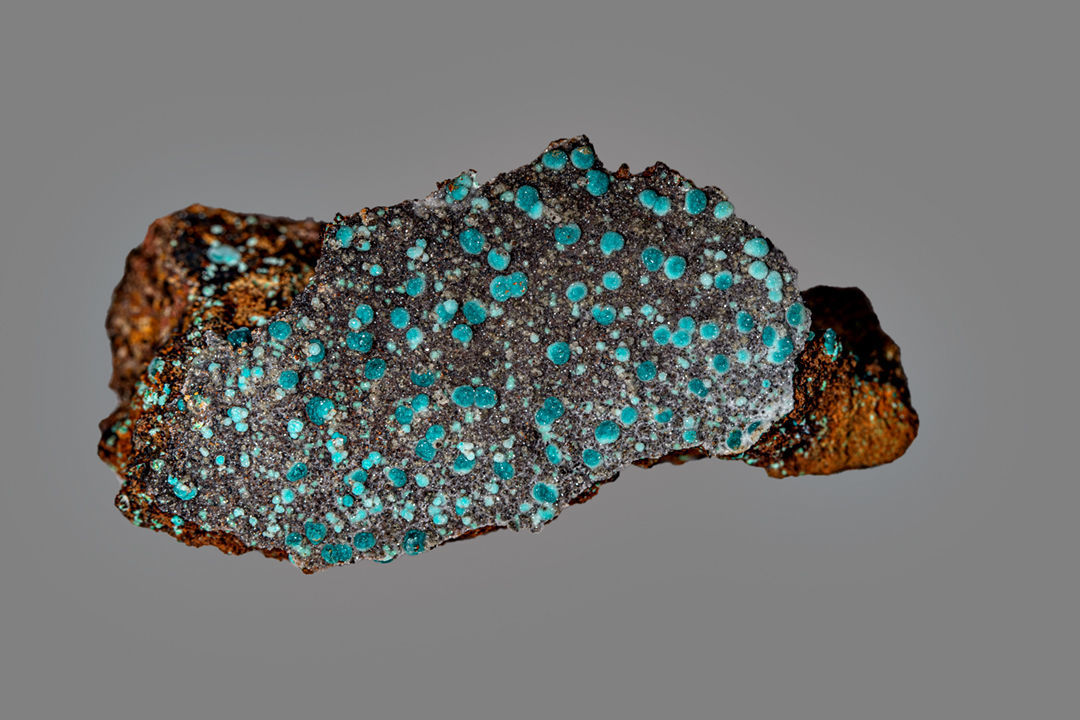 Rosasite from the Omega Mine in Pima County. The mine was once owned by a prominent Tucson family, the Zeckendorfs. 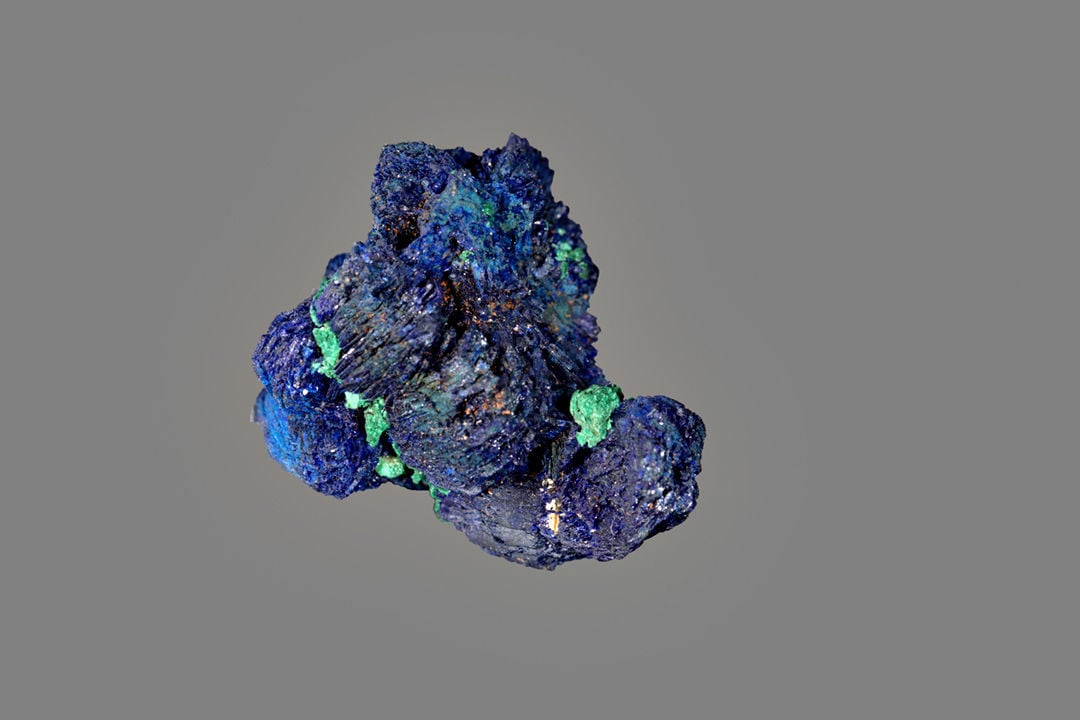 Mining activity in the Santa Rita Mountains has existed for several hundred years, beginning with the Spanish in the 18th century at the silver and gold mines of Salero and Alto.

Located 28 miles southeast of Tucson in the moderately rugged 6,000-foot north end of the Santa Ritas, the Helvetia-Rosemont Mining District has played an integral role in Arizona’s copper mining history.

Geology of the district is complex with diverse formations and structures caused by millions of years of folding, faulting, igneous intrusion, and erosion forces. Rocks comprise Precambrian schist, quartzite, limestone, shale and sandstone.

The first confirmed copper mining operation in the Helvetia-Rosemont district was undertaken by Tucson businessmen Pinckney R. Tully and Esteban Ochoa, who shipped 5,000 pounds of copper ore in 1875 from the vicinity of the Omega Mine.

Three years later the Helvetia-Rosemont Mining District was formally established by local miners including Ben Hefti, who christened Helvetia after the Helvetic Confederation of Switzerland.

Rosemont, a neighboring district, would later be assimilated due to convergent geological and geographical boundaries.

The district, one of around 50 mining districts in Arizona at the time, evolved from the Mining Law of 1872 granting miners and corporations the freedom to regulate geographic boundaries, patents and maintenance of their mining claims in respect to the laws of the United States.

By 1880, the arrival of the Southern Pacific Railroad in southeastern Arizona, combined with copper’s integral role in the electrification of the nation, ensured that copper mining would flourish.

Access to nearby railheads would enable the district’s ore to be shipped for beneficiation at smelters at Tucson, Globe and El Paso.

One of the oldest mines in the district was the Frijole Mine, operated by John Weigle and William Hart. Ore from it, along with the Old Dick Mine, was treated at the Columbia Smelter on the west flank of the Santa Rita Mountains.

Early mining claims were made by William B. McCleary in the 1870s, forming the nucleus of what became known as the Rosemont Mining Camp at Wasp Canyon on the east slope of the Santa Ritas.

His partner L. J. Rose would help develop 30 claims (including the Hilo, Mohawk, Old Put and Oregon) incorporating the Rosemont Smelting and Mining Co. in 1894.

Established that same year, Rosemont Camp, located 4 miles southeast of Helvetia, included a population of 150 residents, a school, a hotel, stores and a post office.

Early operations were overseen by the Rosemont Mining & Smelting Co. until lack of profit mixed with high debt necessitated their sale to the Lewisohn Brothers, a prominent metals investment family of New York, in 1896.

High concentrate matte produced by on-site smelting was transported by 12 horse teams navigating dirt roads round trip to Vail’s Station and returning with coke, a high heating fuel for the smelter.

Helvetia, established in 1899, comprised a small settlement of saloons, stores and stage lines to Tucson and Vail.

A steam-powered, narrow-gauge railroad was completed in November 1899. Consisting of two spurs at the Heavy Weight Mine and the collective mines at Copper World, Isle Royal and Omega, it ran a length of 8,000 feet to the 175-ton smelter at Helvetia.

Plans beyond the survey stage never materialized to extend rail to Tucson, and wagon would be the primary means of ore transport during the early years.

The Omega Mine operated by the Omega Copper Co. installed a small on-site water-jacketed blast furnace in 1883 to better reduce ore to high-grade copper matte.

The Omega and the Omega Extension were once owned by a prominent Tucson family, the Zeckendorfs, who extracted on-site 2,000 tons of ore between 1884 and 1910.

Development of this mine on the western flank of the Santa Rita Mountains comprised 2,000 feet of workings including a shaft, four tunnels, a winze and open cut found on a faulted contact of coarse granite intruded by mineralized Paleozoic limestone. Splendid mineral specimens have been found at this locality including azurite, malachite, hemimorphite and rosasite.

By 1910, the district showed a decline in mining activity due to a drop in metal prices and rising labor, materials and transportation costs, resulting in the closure of both mining camps.

The next installment of Mine Tales, on Aug. 10, will be Part 2 about the Helvetia-Rosemont Mining District, covering WWI to the present, including the current exploration and development efforts of Hudbay Minerals Inc.

Across Pima County, 11,856 cases of coronavirus have now been confirmed, up 89 cases from the day before.

The old gray buildings that once marked the Southern Arizona mining town of Helvetia, a ghost town for many years, were demolished in the late 1960s.

Helvetia as it appeared in 1909 with the smelter as the centerpiece, railroad bend around the Old Dick Mine with Hart’s Butte and Weigles Butte in the distant background.

Louis Zeckendorf, financially backed Territorial Arizona mining industry including the Copper Queen Mining Co. and the Omega Mine in the Santa Ritas.

Rosasite from the Omega Mine in Pima County. The mine was once owned by a prominent Tucson family, the Zeckendorfs.