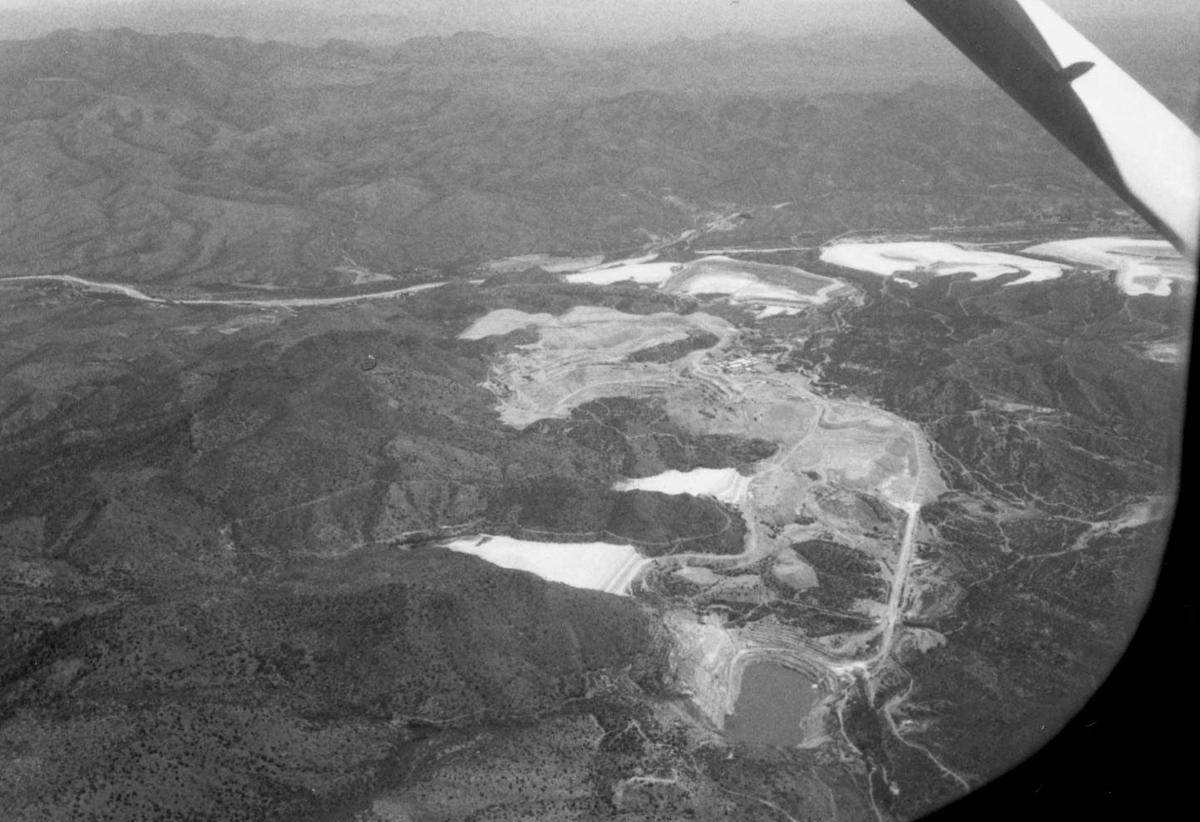 An aerial view of the Copper Cities Mine near Miami. 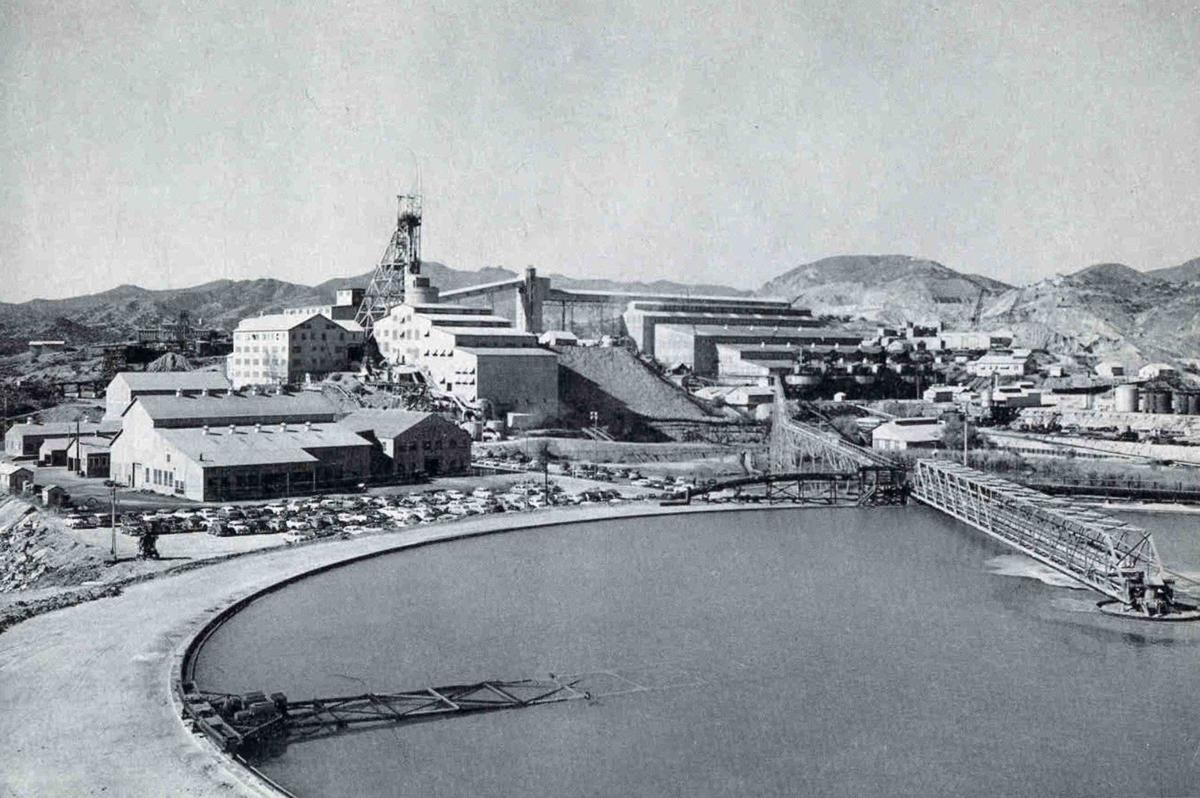 The Miami Copper Co. concentrator/middlings thickener and mine shaft. By 1970, the site was credited with having mined enough ore to produce 627 million pounds of copper. 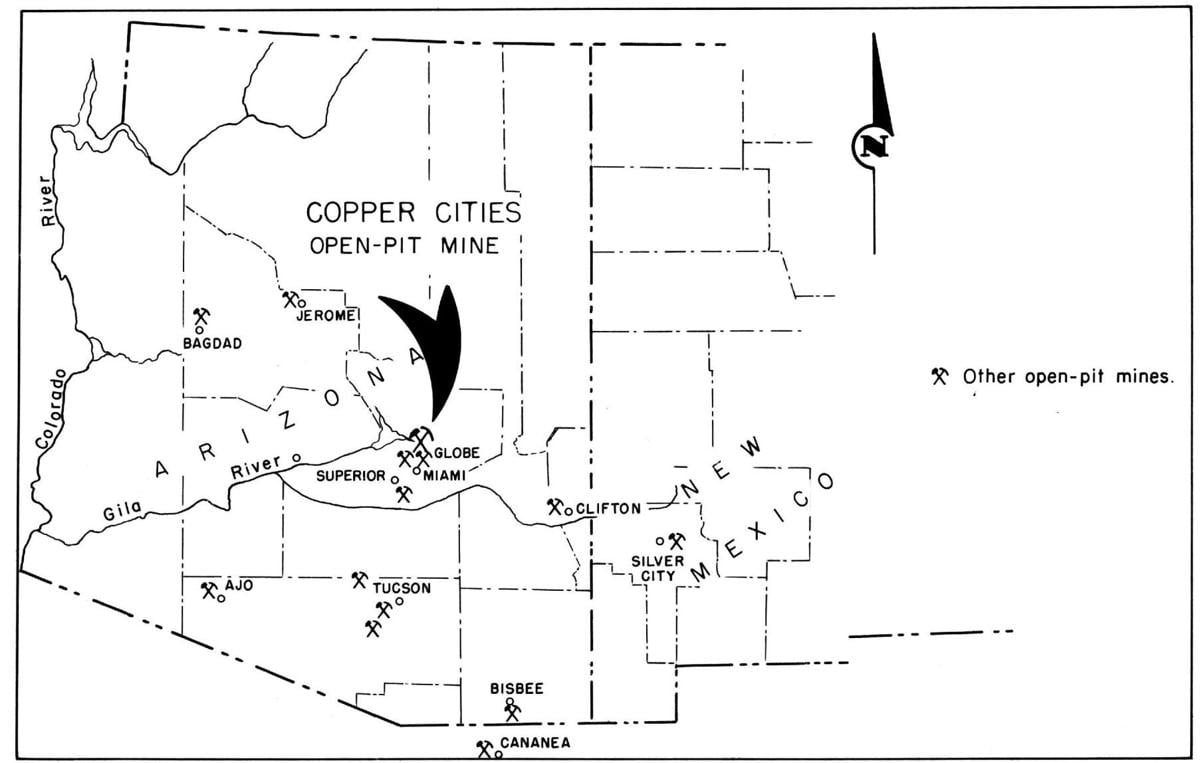 Location of the Copper Cities Mine in Arizona.

The Miami-Inspiration Mining District has a long history of copper production. Some of its most prominent mining properties include the Inspiration, Miami and Copper Cities mines, which led Arizona’s copper production at intervals during the 20th century.

The area known as Miami was first noted for reddish outcrops that enticed prospectors like Black Jack Newman to invest and develop. Newman’s initial acquisition totaled 13 claims comprised of 260 acres.

With the backing of J. Parke Channing, a successful mining engineer who optioned Newman’s claims, the Miami Copper Co. was formed in 1908 with the financial backing of the Adolph Lewisohn family in New York.

The following year the railroad was extended six miles west from Globe to Miami and copper production commenced in 1911.

The Miami Copper Co. would go on to operate the Miami, Pinto Valley, Castle Dome and Copper Cities mines.

The Copper Cities ore body is located on the south side of Sleeping Beauty Peak 4 miles north of Miami in the foothills of the Pinal Mountains. It is on the flank of the Schultz Granite intrusive complex comprised of northeastward post mineral faults with intrusive igneous rocks dating to the Laramide Age from 70 million to 40 million years ago.

Acid soluble copper minerals such as azurite and malachite were also found in the ore body, along with turquoise.

Beginning in the 1890s, prospectors focused on gold and silver deposits in the area.

Exploitation of the porphyry copper deposit increased in the early 20th century due to favorable copper market prices, cost efficient truck haulage and access to a concentrator.

Although classified as a minor low-grade ore deposit, Copper Cities made its mark on the mining district after the property was secured by the Miami Copper Co. around 1940.

The Copper Cities Division of Miami Copper Co. was formed to operate the property.

Churn drilling in the 1940s consisting of a 250-foot rectilinear grid pattern revealed a potential ore body that could be mined for profit. More than 33 million tons of ore were blocked out to accommodate future open pit mining operations. Timing proved opportune as production was winding down for the adjacent Castle Dome Mine in 1953.

Equipment was purchased from the government and transferred from that locality to the Copper Cities Mine, including the mill building, which had originally served at the “Copper Queen” mill at Bisbee.

About $13 million was invested in the development of the mine by the Miami Copper Co., including $7.5 million borrowed from the Reconstruction Finance Corp. along with a purchase contract executed with the General Services Administration, which guaranteed a minimal government purchase of copper at 23 cents per pound for the first 170 million pounds of production.

During the 1960s, low-grade, nonmillable ores were processed using dump leaching, wherein the copper from the pregnant leach solution was recovered by a precipitation plant. The presence of pyrite in the dumps avoided the necessity of adding acid to the leach solutions.

By 1970, the site was credited with having mined more than 57 million tons of copper milling ore of which 627 million pounds of copper were produced.

Mining and milling operations ceased by 1976 due to a depletion of ore reserves.

Later activity in the area included turquoise mining north of the Copper Cities open pit mine. Known as the Sleeping Beauty Mine, it supplied medium blue seam turquoise to the jewelry industry until closure in 2012. The locality is popular among collectors for characteristics including hardness and lack of fractures and inclusions.

Currently the EMX Royalty Corp. and its subsidiary Bronco Creek Exploration Inc., in alliance with South32 USA Exploration Inc., are committed to exploratory work for copper and molybdenum on the property comprised of 3,250 acres and 183 unpatented lode mining claims.

The number of confirmed coronavirus cases across Arizona is 27,678, the Arizona Department of Health Services said.

An aerial view of the Copper Cities Mine near Miami.

The Miami Copper Co. concentrator/middlings thickener and mine shaft. By 1970, the site was credited with having mined enough ore to produce 627 million pounds of copper.

Location of the Copper Cities Mine in Arizona.