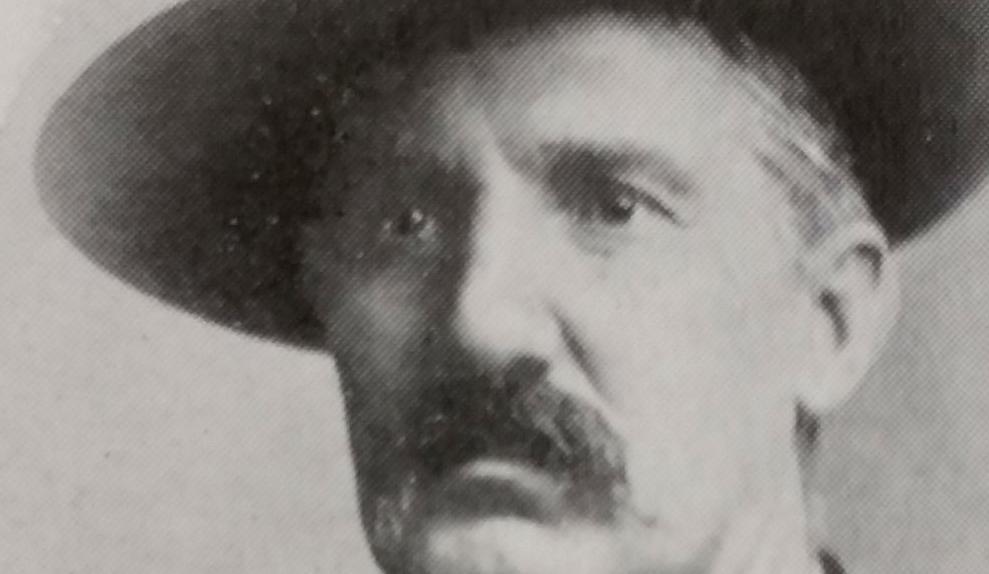 Al Sieber was a renowned prospector and chief Army scout during the Apache Wars. 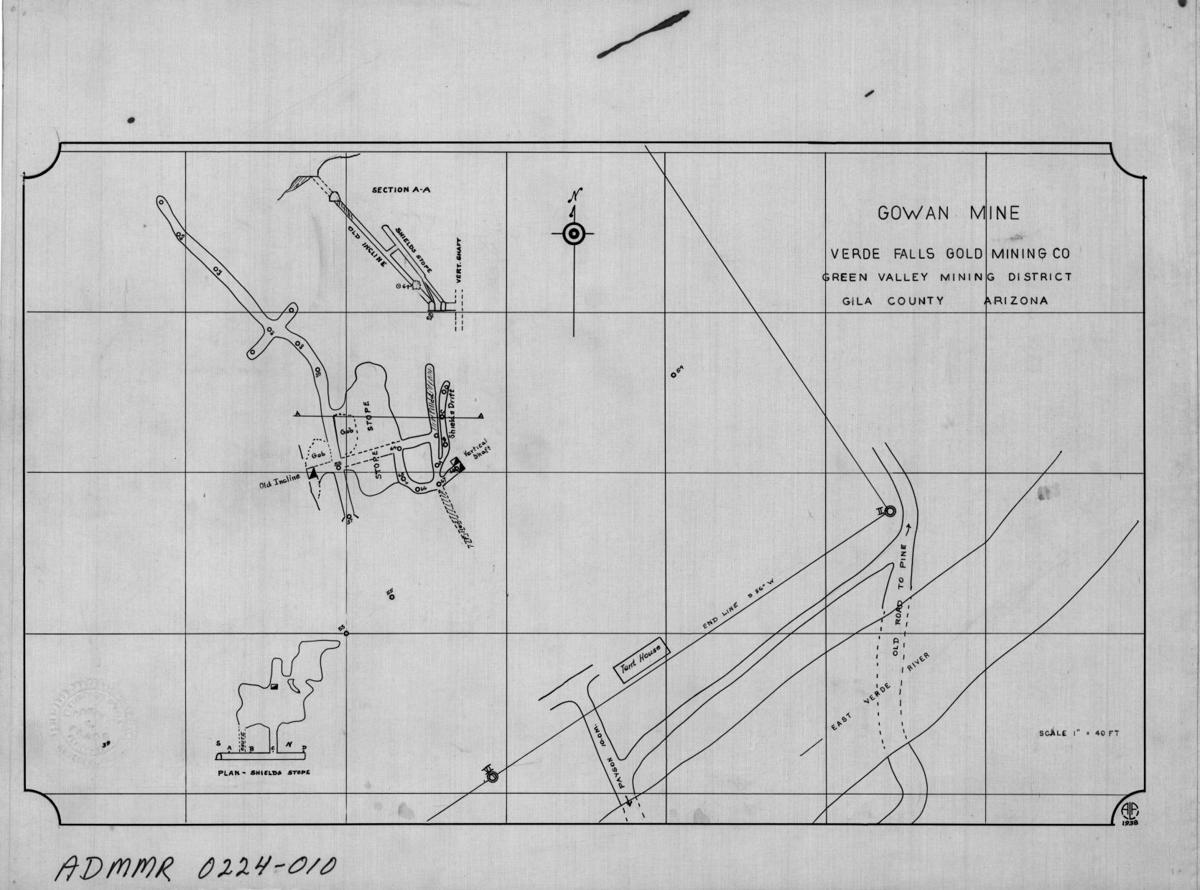 A working diagram of the Gowan Mine. 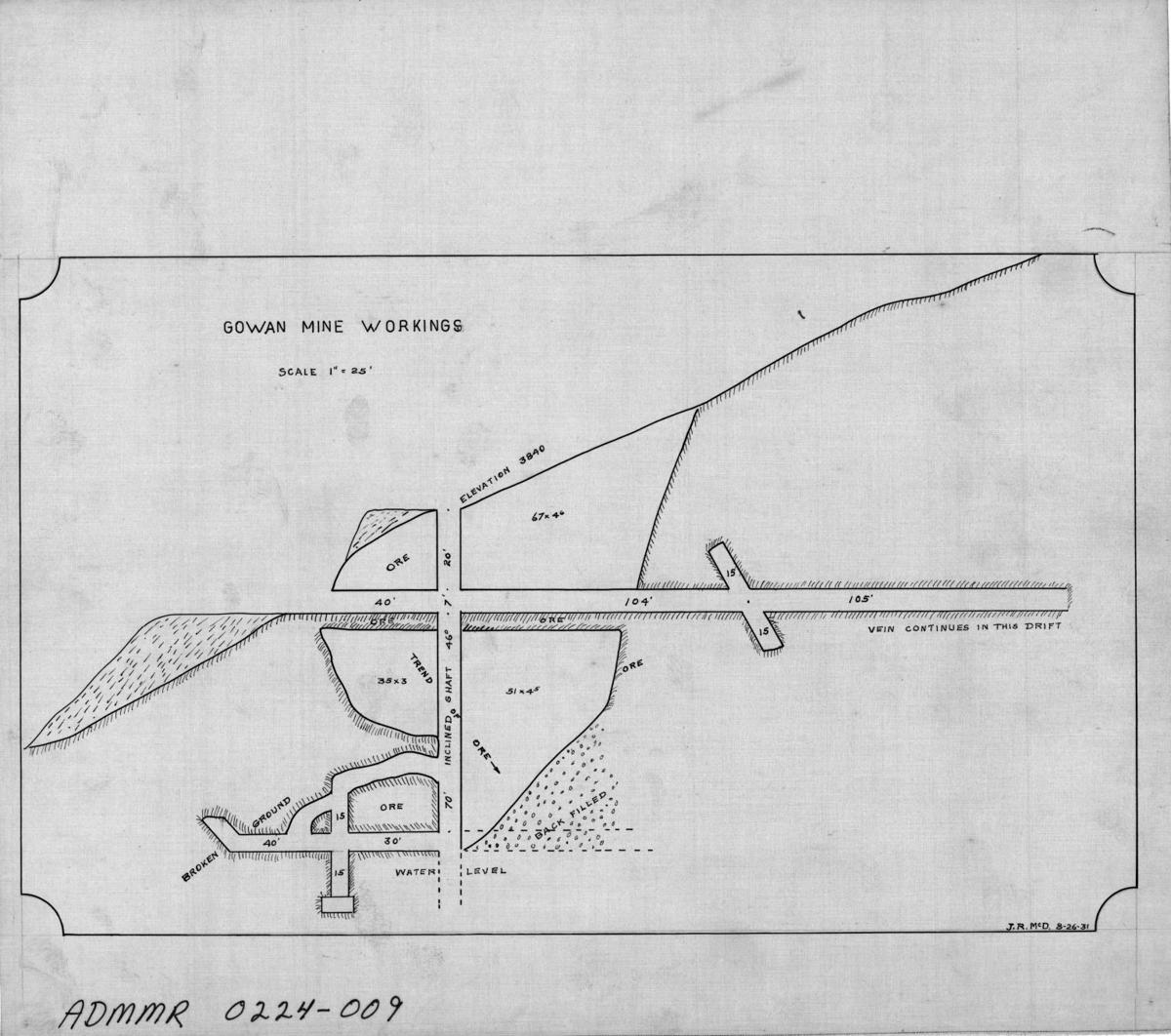 Diagram of underground working of the Gowan Mine. 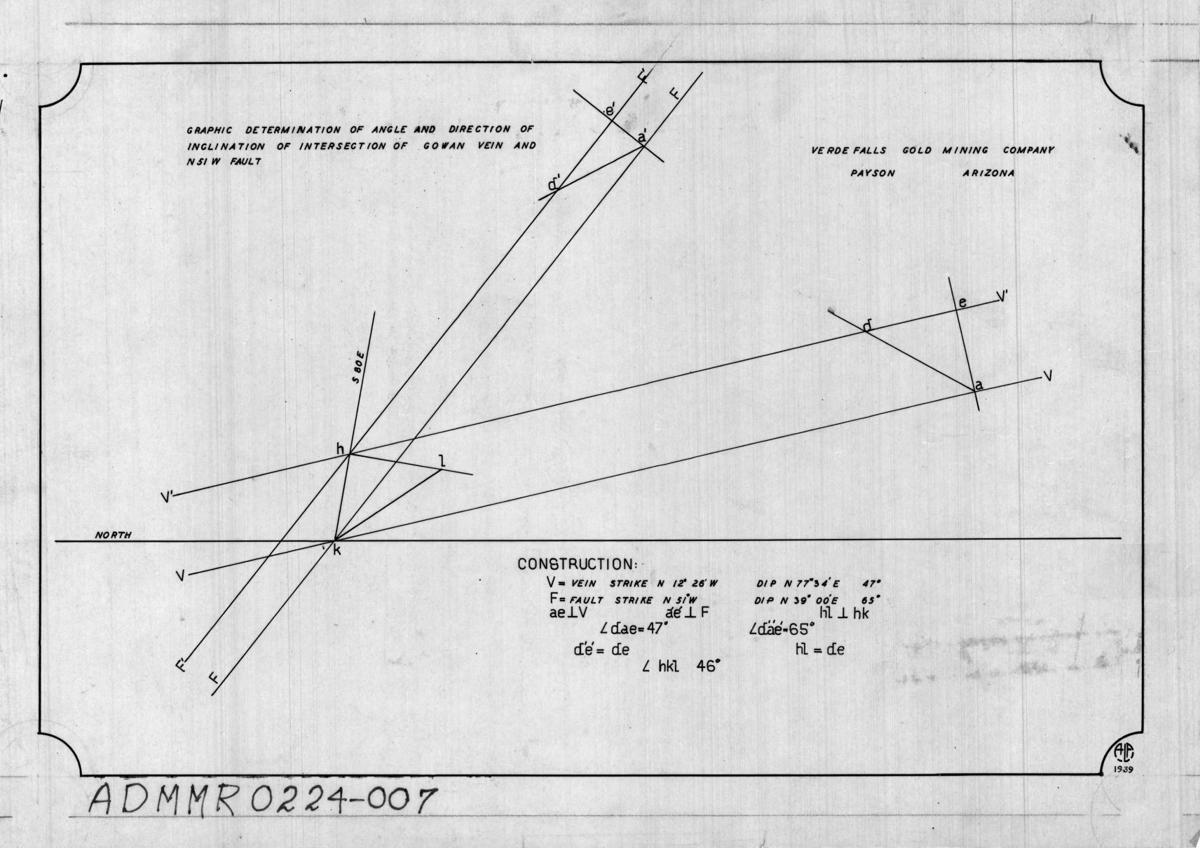 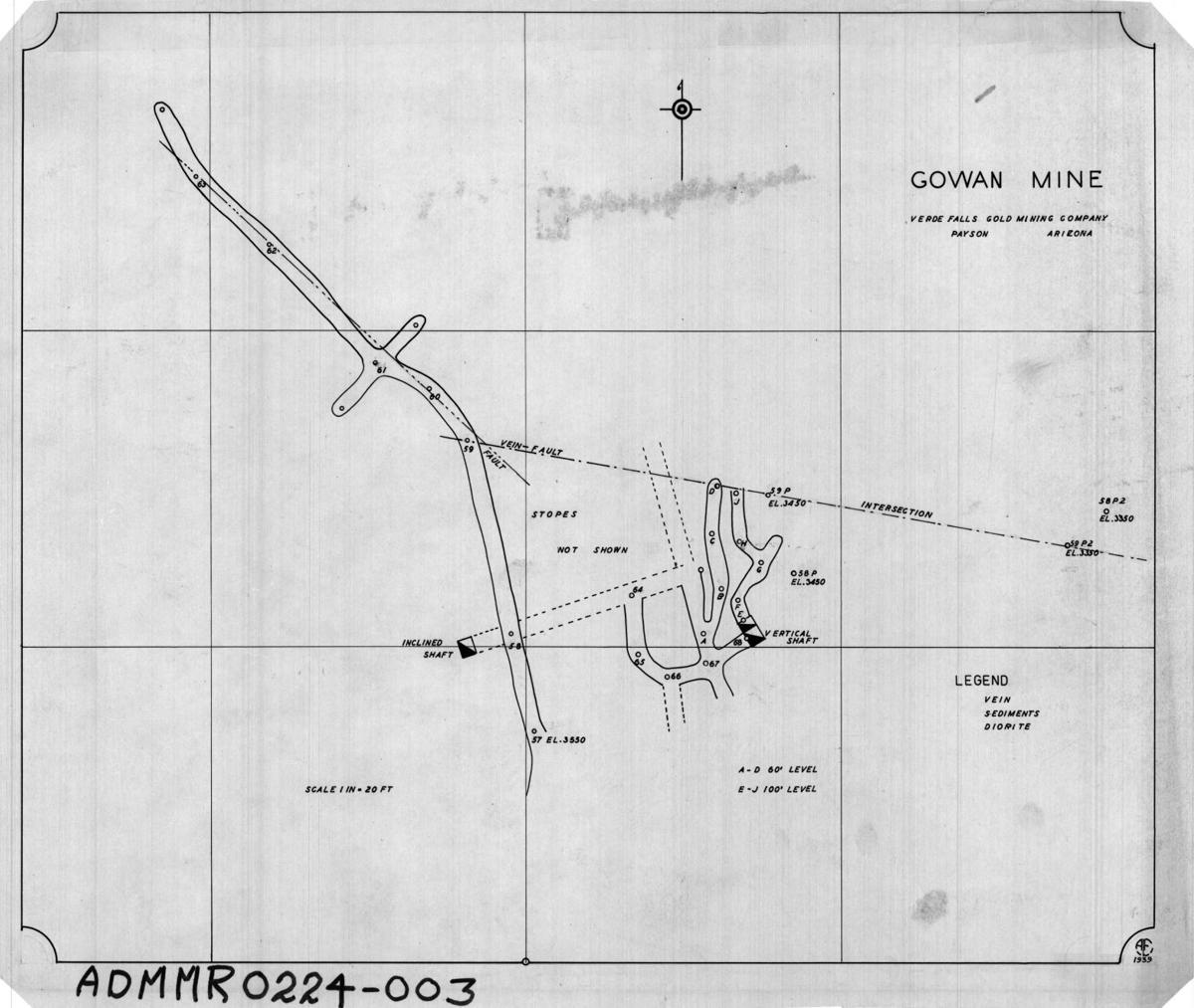 Diagram depicted the vein-fault intersection of the Gowan Mine.

The town of Payson, established in the early 1880s, has contributed to Arizona history in multiple ways, including being located near the well-known Pleasant Valley War waged from 1887 to 1892.

It also contributed to Arizona’s economy with a robust logging and cattle industry while billing itself as the “World’s Longest Continuous Rodeo” established in 1884.

Located almost in the geographic center of Arizona in the low, rolling, granite hills between the Mazatzal Mountains and Sierra Ancha Mountains, Payson has acquired the attribute, “the Heart of Arizona.”

Payson also served as a thriving mining center located in the mountainous area of northern Gila County, with the spectacular backdrop of the Mogollon Rim escarpment to the north, separating Arizona’s physiographic transition zone from the Colorado Plateau.

Mining gained prominence, attracting several hundred men during the last two decades of the 19th century with an estimated $400,000 worth of gold ore produced and treated by arrastras and a two-stamp custom mill. The ore is said to have run as high as $100 per ton in gold and silver.

The earliest mining locations are said to have been discovered in 1875 by Al Sieber, a renowned prospector and chief Army scout during the Apache Wars.

Local geology includes large quartz veins in altered diorite and granite-porphyry. Veins average 3 to 5 feet in thickness, including one as much as 12 feet at the Gowan Mine. Mineralization consists of principally gold with quartz as gangue (worthless material) along with some copper (found as chrysocolla, chalcocite and chalcopyrite) and silver.

By 1881, most of the prominent quartz veins were being worked.

The Gowan Mine, 9 miles west of Payson, was the most productive mine in the Green River Mining District, ranging in elevations between 3,400 to 5,000 feet above sea level.

Located in the late 1870s, the mine included a small milling operation of custom gold ore relying on a water supply from the East Verde River, 100 yards from the mine. The mill consisted of amalgamation and cyanide able to process 25 tons in 24 hours. Mine workings included 800 feet of tunnels and 250 feet of shaft with a considerable number of stopes and raises.

The gold was characterized as occurring as free gold “found pure or uncombined with other minerals” along with limonite and hematite in the quartz. Notable also is the lack of sulfides in the ore produced.

Another prominent mine in the district was the Ox Bow Mine, owned by the Atlantis Mining Co. Located by Al Sieber, William Moore and St. John in 1876, with concerted efforts made to mine during World War I, operations relied upon supplies hauled from Globe and timber from sawmills east of Payson. Though uncommon, some placer mining was conducted below Ox Bow Hill during the rainy season.

Additional producing mines include the Golden Wonder Mine, located around 1877.

A small mill was built on the property and processed some gold, with two shafts developed several hundred feet apart. They were sunk to 300 feet below the surface.

However, upon reaching the water level, the abundance of sulphides as a constituent of the ore hindered the processing of gold by amalgamation.

The Silver Butte Mine, located on the lower east slopes of the Mazatzal Mountains, was a producer of silver. The geology included volcanic flows altered to greenstones intruded by dikes of hornblende diorite and granite porphyry.

Silver ore was discovered in a 7-foot wide vein containing tetrahedrite, a chief constituent of silver ore occurring in gangue of calcite and quartz. Metallic, iridescent, hexagonal plates of indigo-blue covellite were also found, occurring as micro-crystals in ore specimens.

A decline in mining operations around Payson occurred by 1940 due to falling ore values that proved unprofitable during the economic conditions of the time.

Concluding analysis showed that the ore veins were richest where they widened or where they contained oxidized iron or copper minerals. Many of the old workings are underwater, with gold contained in pyrite.

Additional reasons for the closure of the mines included challenges in extraction and transport, “Globe being the closest point of shipment 90 miles away on the Arizona Eastern Railroad.”

Mining still retains a small presence around Payson, with around 185 active claims in the vicinity out of a documented 8,816 established claims.

William Ascarza is an archivist, historian and author of seven books available for purchase online and at select bookstores. These include his latest, “In Search of Fortunes: A Look at the History of Arizona Mining,” available through M.T. Publishing Co. His other books are “Chiricahua Mountains: History and Nature,” “Southeastern Arizona Mining Towns,” “Zenith on the Horizon: An Encyclopedic Look at the Tucson Mountains from A to Z,” “Tucson Mountains,” “Arizona-Sonora Desert Museum” with Peggy Larson and “Sentinel to the North: Exploring the Tortolita Mountains.” Email Ascarza for signed copies at AZMiningHistory@gmail.com

Al Sieber was a renowned prospector and chief Army scout during the Apache Wars.

A working diagram of the Gowan Mine.

Diagram of underground working of the Gowan Mine.

Diagram depicted the vein-fault intersection of the Gowan Mine.