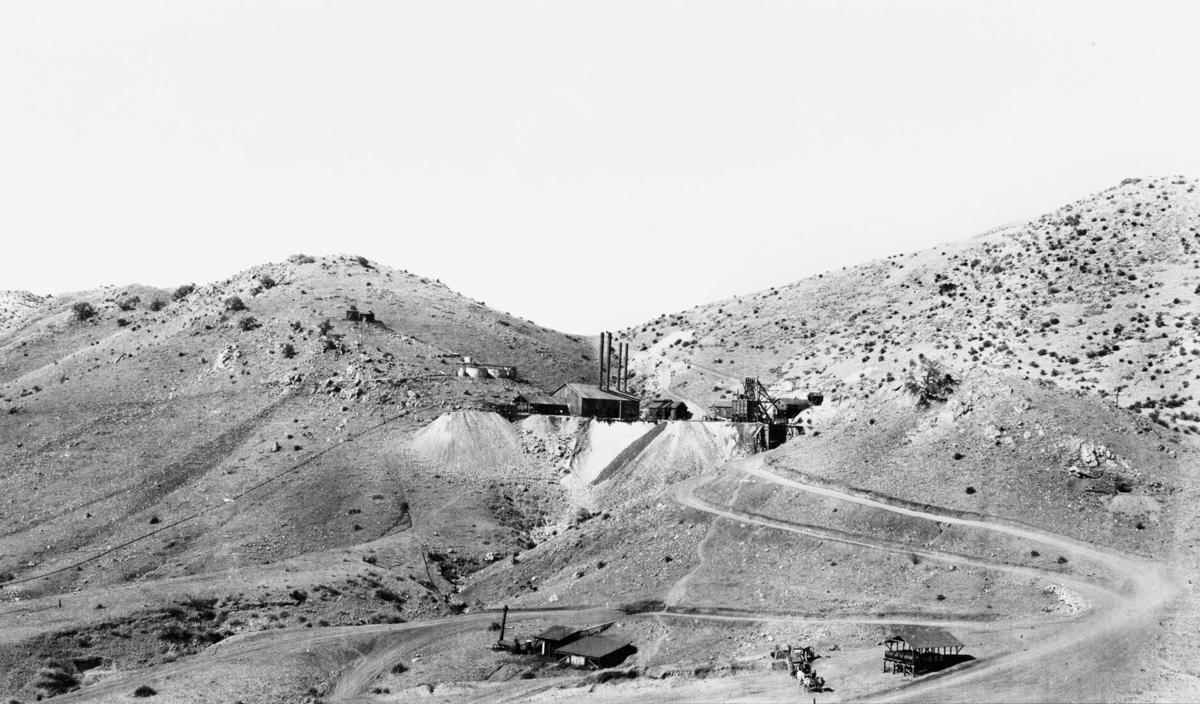 Copper World Mine, looking north-northwest. The mine had a production figure of over 4 million pounds of copper. 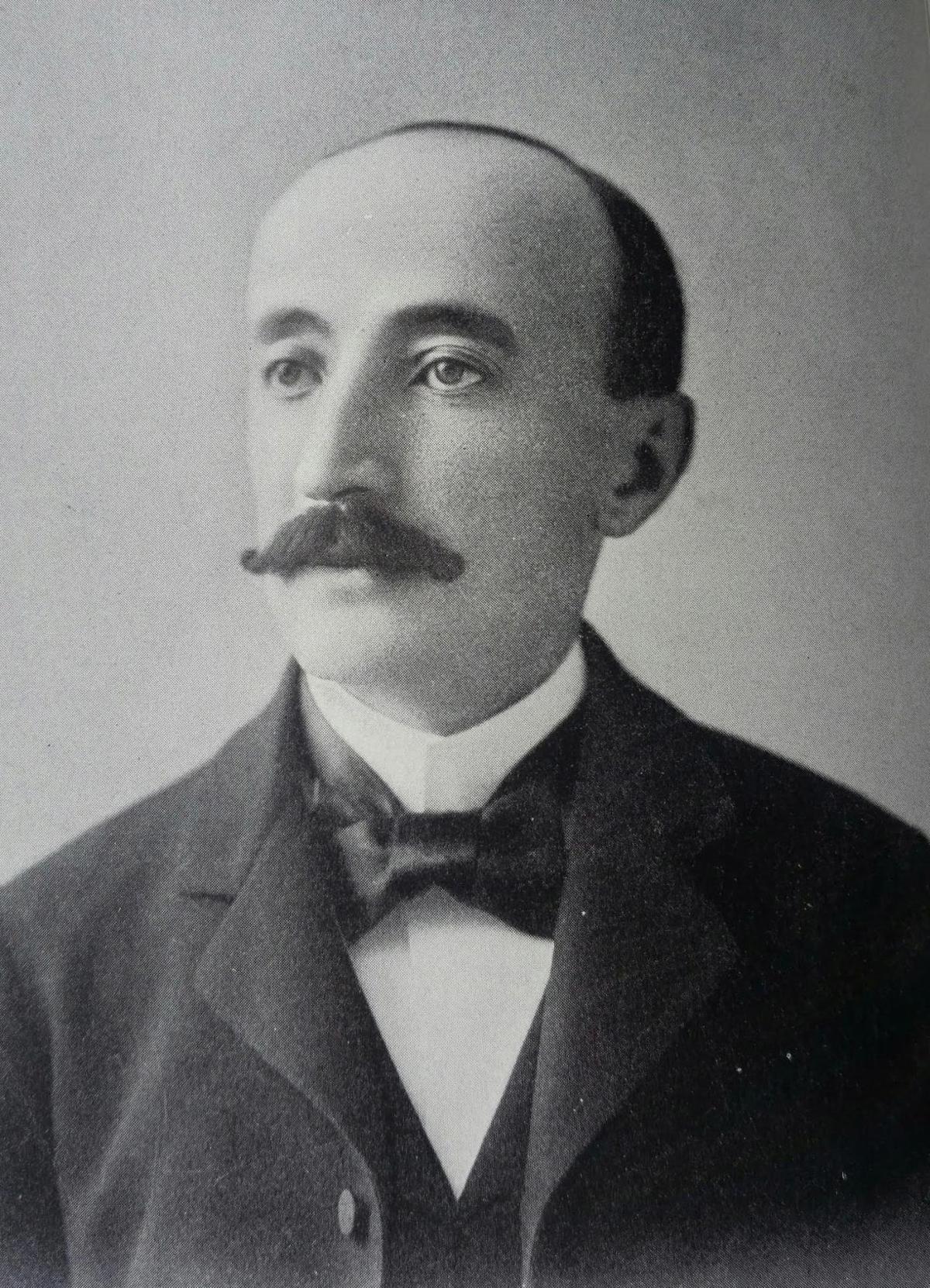 Albert Steinfeld, prominent Tucson businessman and one of the owners of the Narragansett Mine, circa 1901. 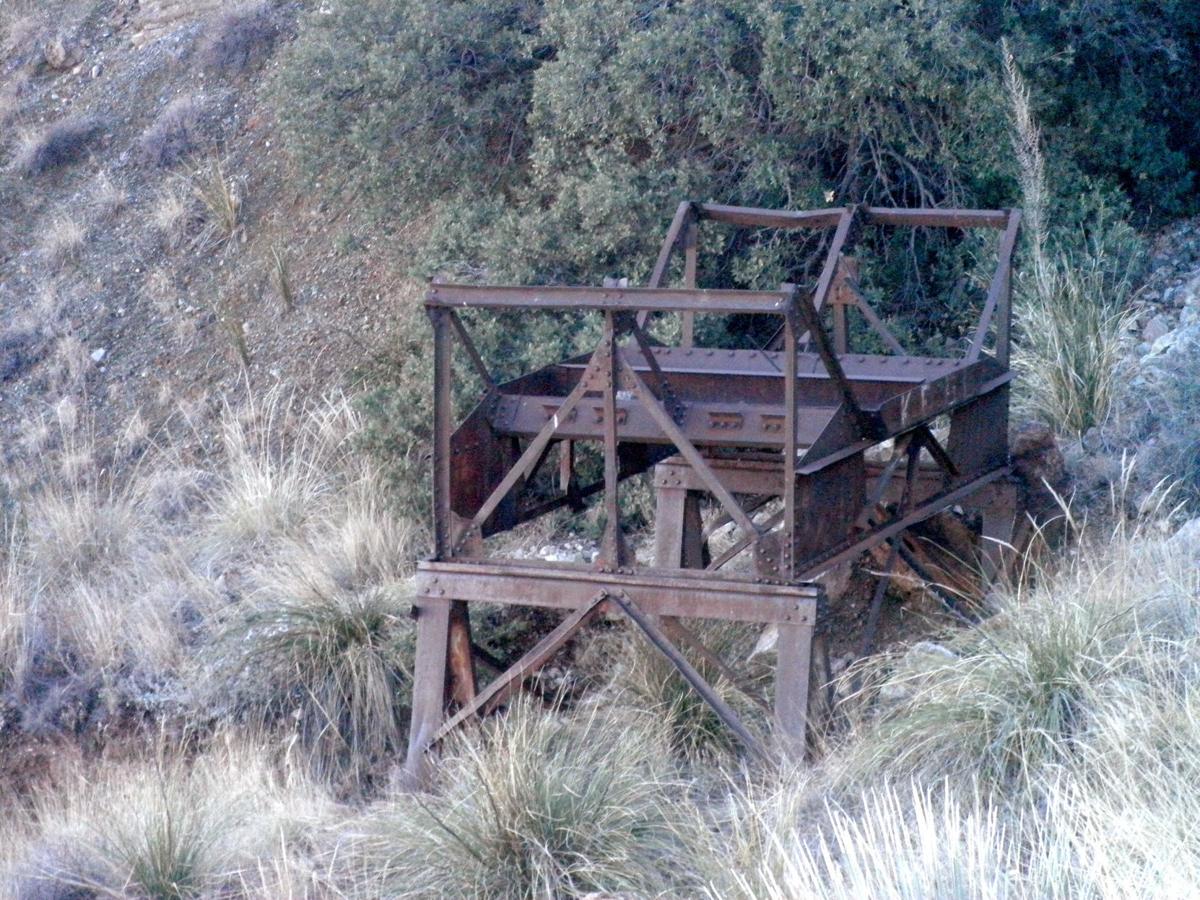 Remains of a six mile aerial tramway near the Narragansett Mine built by the Helvetia Copper Co. in the 1890s at a cost of $800,000. 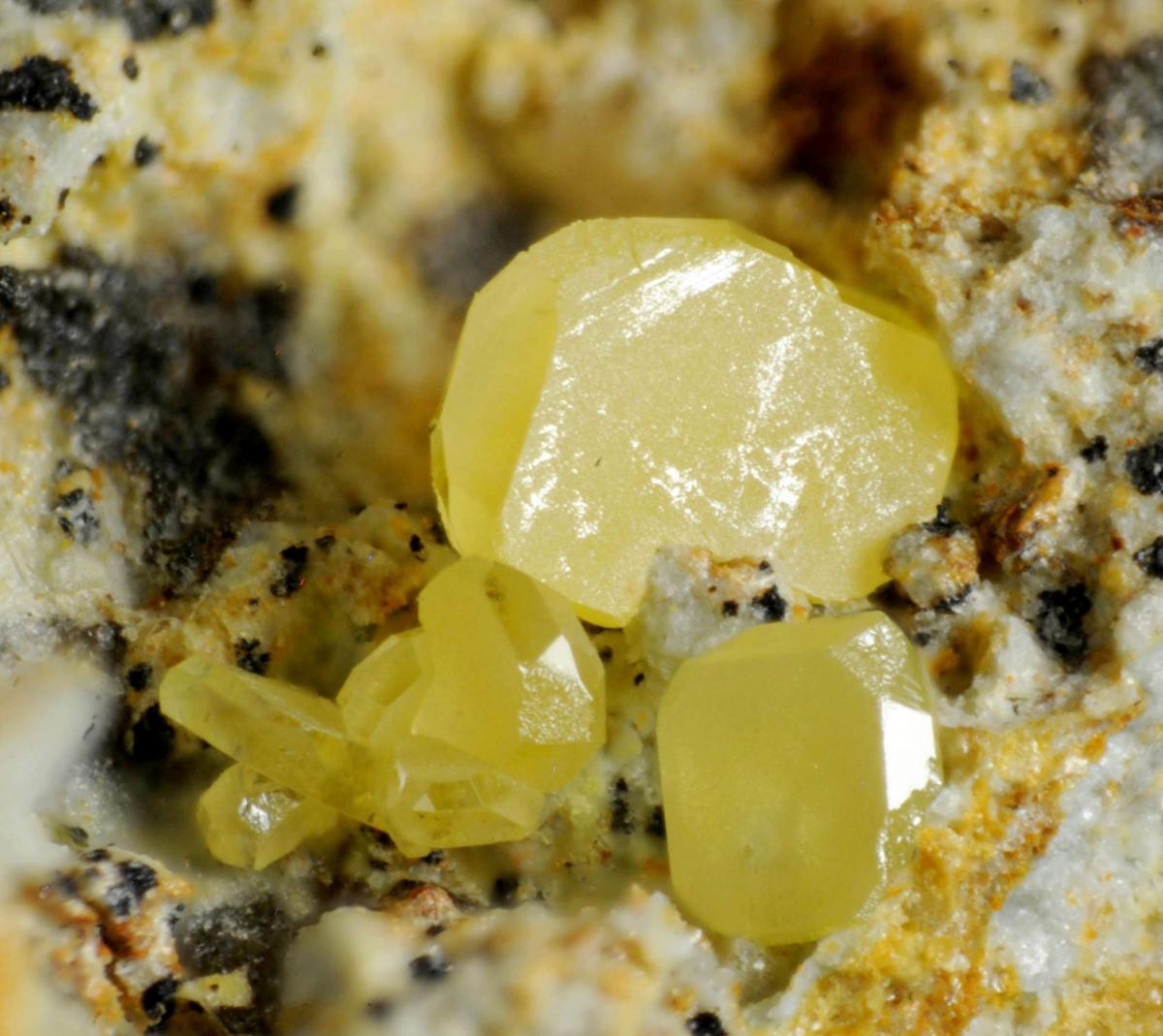 7mm across wulfenite crystals collected from open cuts above the road and main tunnel of the Narragansett Mine. 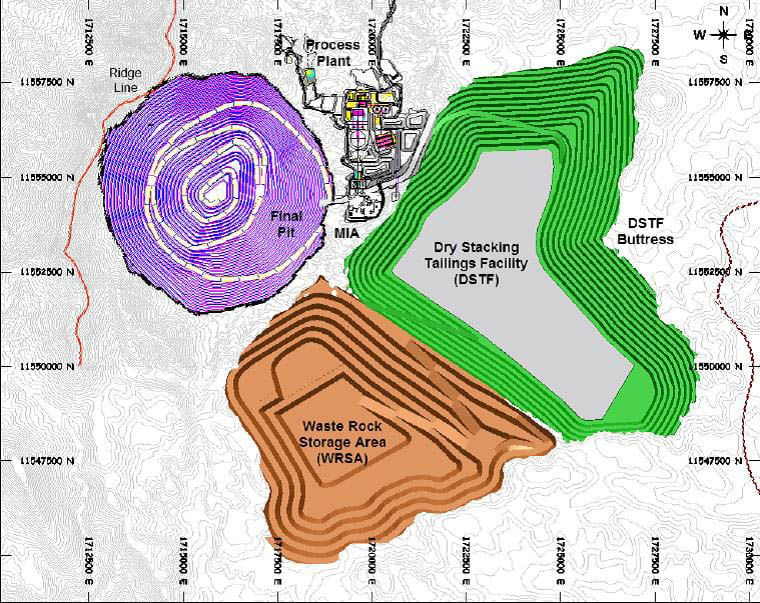 Current mine plan of operations. 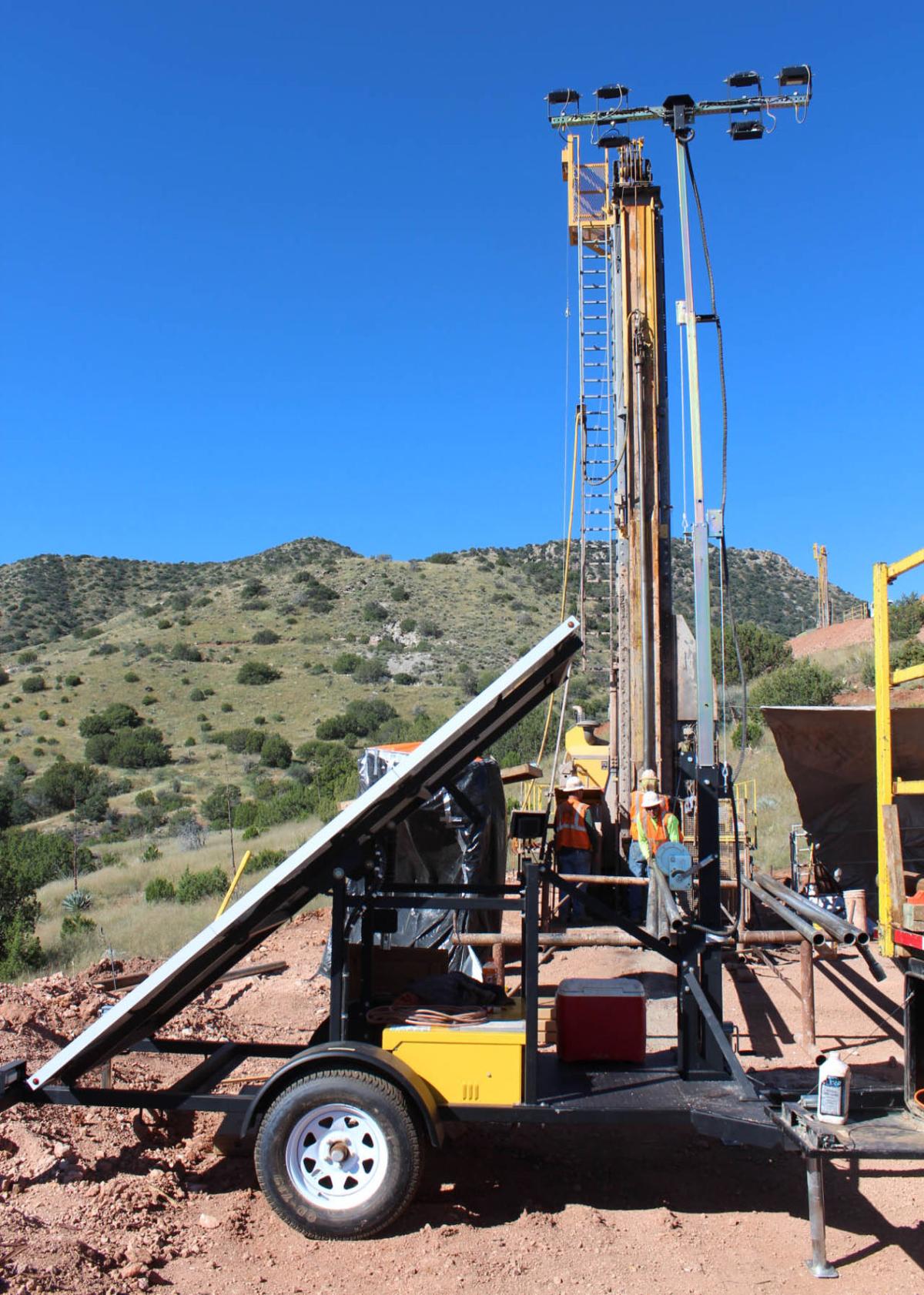 Recent 46 hole 75,000 feet drill program conducted by Hudbay to study the geology and mineralization of the deposit.

Steady production continued in the Helvetia-Rosemont Mining District through the first half of the 20th century, with mining operations synced to the market price of copper.

Primary mining activity there, in the Santa Rita Mountains southeast of Tucson, came from the Rosemont lease, Leader, Copper World and Narragansett mines.

The Narragansett Mine, comprised of crushed and altered limestone laden with copper carbonates averaging 3% copper and iron oxides, was discovered by James K. Brown in 1879 and developed by the Lewisohn Brothers 20 years later.

Acquired by the Narraganset Copper Co. in 1915 and then by prominent pioneer merchant Albert Steinfeld of Tucson in 1919, the mine’s copper output reached more than $1.5 million. More than 34,000 dry tons of ore were shipped by wagon or truck 18 miles to the Southern Pacific railhead at Vail for further refinement at a distant smelter.

The Narragansett Mine led the district’s production during World War 1, employing 137 men extracting 6 million pounds of copper, 42,000 ounces of silver and some gold byproduct.

Early production from the Leader averaged 14% copper ore. There was a small 75-ton flotation-concentrating mill near the mine’s entrance. The Copper World included a 500-foot double-compartment inclined shaft and production figure of over 4 million pounds of copper.

M.N. Wolcott acquired the Rosemont lease including six patented claims from the Lewishohn Estates in 1941. Several thousand tons of hand-sorted ore averaging 6% copper were transported by 400 feet of aerial tramway to an ore bin, then trucked 20 miles to the Southern Pacific railhead at Vail for refinement.

Disseminated copper skarns were explored by the Lewisohn Copper Corp. around Broadtop Butte and Peach-Elgin prospects.

The Banner Mining Co. acquired controlling interest among the Rosemont mining claims, having diamond-drilled the discovery hole in 1961 that confirmed the first significant porphyry copper deposit in the Rosemont area.

Anaconda leased the properties in 1963, conducting extensive exploratory drilling, and followed by a succession of owners: ANAMAX, Asarco and Augusta Resource Corp., which in turn was acquired by Hudbay in 2014. By 2015, a total of 355 drill holes comprising 510,780 feet better defined the size and quality of the deposit.

Hudbay currently owns the mineral rights and private surface rights at Rosemont, including majority interest in 132 patented claims (2,000 acres) and 1,836 unpatented claims (16,000 acres), all of which are registered under its subsidiary Rosemont Copper Co.

Plans for ore extraction by open pit mining date to 1974 when Anamax Mining Co. first contemplated the investment, having owned the Empire Ranch as a water source. Current mineral reserve estimates for the final pit include 592 million tons with grades of 0.45% copper, 0.012% molybdenum and 0.13 ounces of silver per ton, and 1.25 billion tons of waste material, totaling 1.84 billion tons. Proven and probable mineral reserves from the pit comprise 5.30 billion pounds of copper, 142 million pounds of molybdenum and 79 million ounces of silver.

An expansive operation generated in six phases over a 20-year period, the planned open pit is projected to reach a diameter of 6,000 feet across and a depth of up to 3,100 feet with 50-foot-high benches. Haul trucks of 260-tons would move rock churned up by 10-5/8-inch-diameter rotary blast hole drills, 60-yard 3 class electric shovels, 46-yard 3 class hydraulic shovels, and 25-yard 3 front-end loaders.

Modeled after Hudbay’s Constancia Project in Peru, copper recovery at the Rosemont processing plant, a standard copper-molybdenum concentrator, would include crushing, grinding, flotation, concentrate dewatering, molybdenum separation and tailings dewatering. Located 1,000 feet east of the planned open pit, the plant would have a capacity for ore treatment of the low sulfur copper porphyry-skarn ores at 90,000 tons per day/32.8 million tons per year.

Groundwater from four pump stations in the Santa Cruz basin west of the Santa Rita Mountains would supply the fresh water needs of the mining operation at 6,000 acre-feet per year. Planned use of dry stack tailings (largest among mining companies worldwide), in contrast to conventional tailings, would conserve water, recycling 15 million gallons per day, involving less storage and constituting a smaller environmental impact with progressive rehabilitation efforts.

Despite ongoing legal challenges, Hudbay is currently in an appeals process with the courts. Should the appeal process favor Hudbay, the company has confidence that full on-site production will begin in 2025.

The Helvetia-Rosemont Mining District has a long history of copper mining and extensive metallurgical and geotechnical studies that have proven the existence of a sizable copper ore deposit. No doubt the district will continue to be attractive to present and future mining endeavors.

Across Pima County, 17,996 cases of coronavirus have now been confirmed, up 116 cases from the day before.

Copper World Mine, looking north-northwest. The mine had a production figure of over 4 million pounds of copper.

Albert Steinfeld, prominent Tucson businessman and one of the owners of the Narragansett Mine, circa 1901.

Remains of a six mile aerial tramway near the Narragansett Mine built by the Helvetia Copper Co. in the 1890s at a cost of $800,000.

7mm across wulfenite crystals collected from open cuts above the road and main tunnel of the Narragansett Mine.

Current mine plan of operations.

Recent 46 hole 75,000 feet drill program conducted by Hudbay to study the geology and mineralization of the deposit.