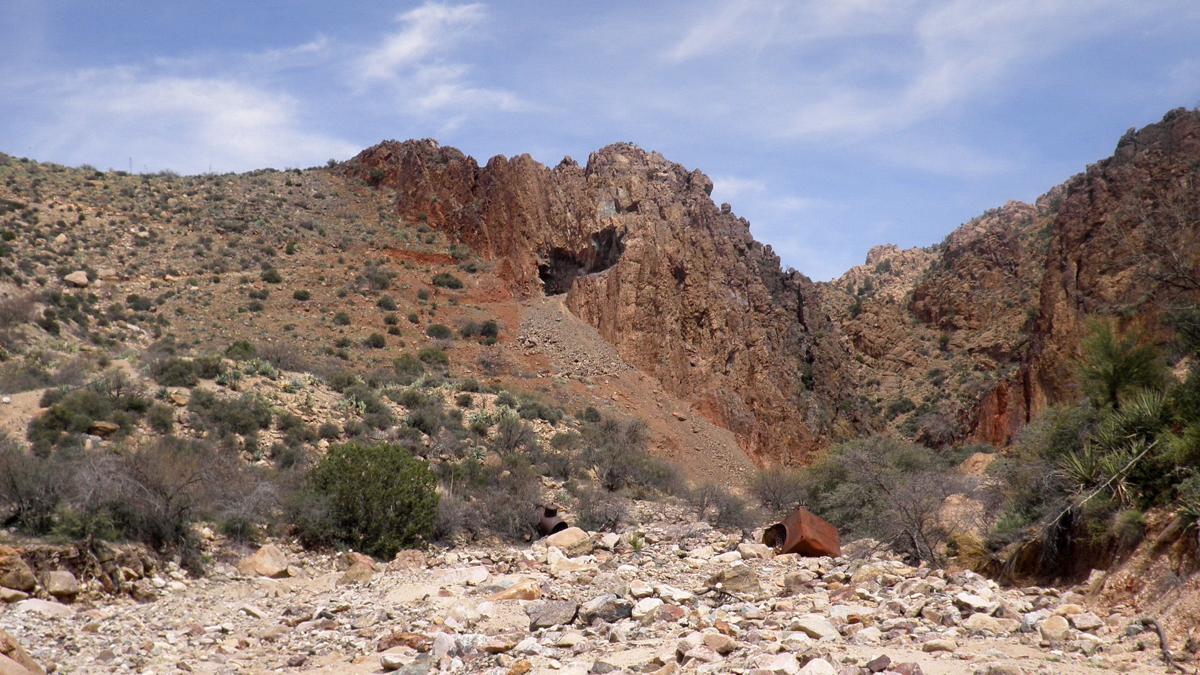 The Grand Reef Mine, with the discarded remains of a boiler below in Laurel Wash, near the ghost town of Aravaipa. 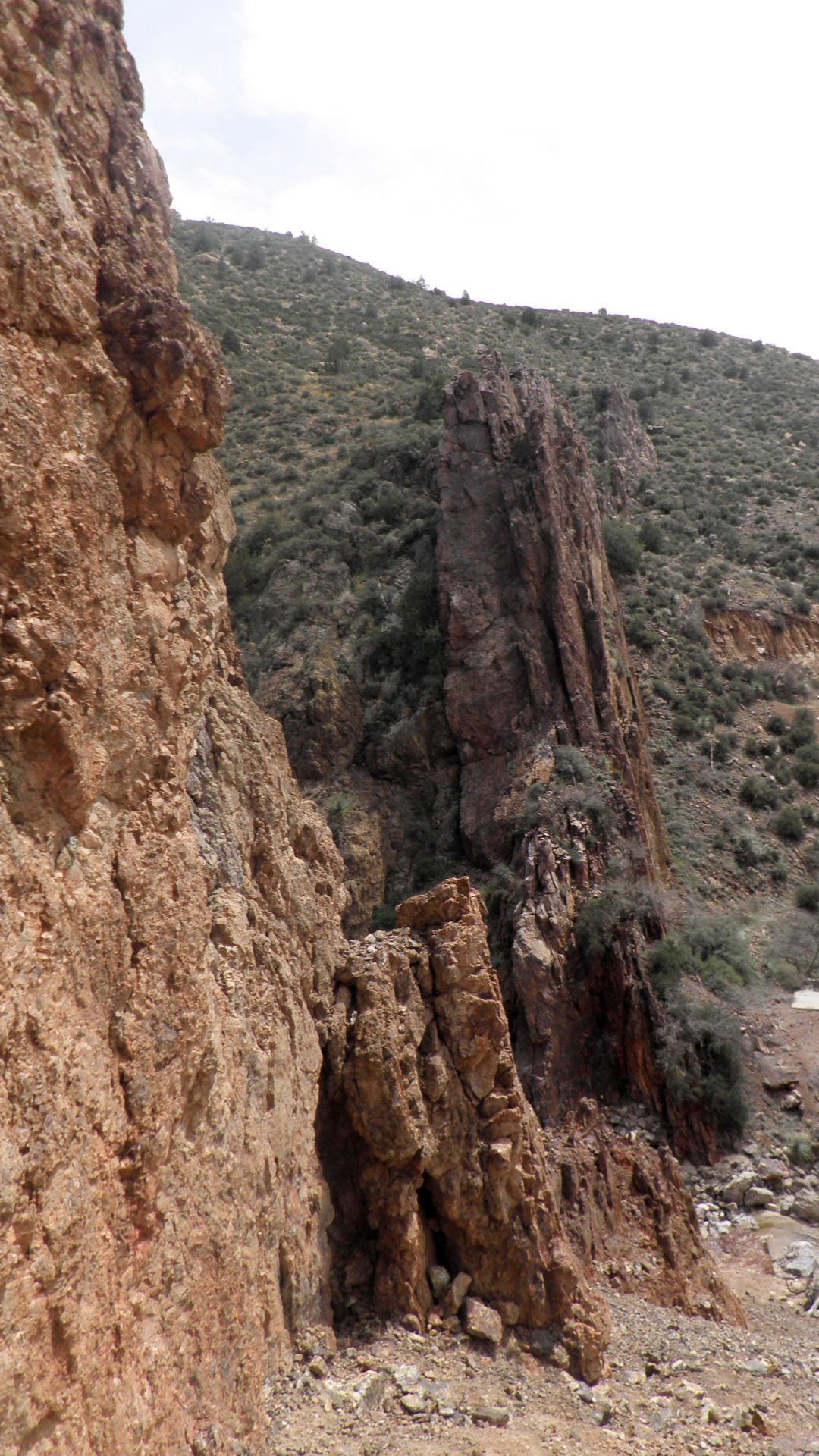 A view along the precipitous slope of the Grand Reef outcrop.

By William Ascarza For the Arizona Daily Star

Graham County possesses some of the most remote and rugged mining districts in Arizona.

The Aravaipa and Stanley mining districts include the Santa Teresa, Turnbull and southeast end of the Mescal mountain ranges.

Early prospectors were drawn to deposits of silver, copper, lead and zinc. However, the lack of transportation to nearby railheads hindered sustained mining operations, and later the area favored agriculture and ranching endeavors.

Challenging terrain hindered multiple projects including the Table Mountain Toll Road, a road to Fort Thomas along the Gila River connected to the Arizona Eastern Railroad and the potential of a railroad navigating Aravaipa Canyon.

Notable mines included the Grand Reef Mine, named for a massive outcrop of iron-stained rock composed of igneous rock mixed with quartz and other vein minerals. Its most prominent exposure is viewed in Laurel Canyon. Smaller operations three miles east of Klondyke included the La Clede Mine, which consisted of five unpatented claims and was operated by James Quinn of Klondyke in the early 1920s.

Quinn reported on the positive discovery of ore assays high in native silver. The Silver Coin Mine directly south was worked by the Aravaipa Leasing Co., replete with a 200-foot shaft and 180-foot tunnel.

Klondyke, established in 1907, served as the distribution hub in the district. It included a general store, post office, church, school and numerous dwellings.

Prospector Frank Landsman acquired a lease for a portion of the Bullis-Landsman claims under the oversight of the Royal Tinto Mining and Smelting Co. in 1902. The small operation yielded 15 tons of chalcocite ore containing up to 29 percent copper per ton. Small amounts of gold and silver were also mined onsite.

Over the next half century, Landsman leased multiple mining claims in the area, including up to 23 at a time. His out-of-pocket expenses included outsourcing geologists and assayers to seek out rich ore veins.

His colleagues included George Bott and Frank Wolf, both of whom helped market his claims to investors, including the Byrd Investment Co. of Tucson and the La Bamboya Mining Co.

Despite extensive development, including diamond drilling and mapping, the Landsman property produced no ore tonnage of economic value.

The Iron Cap Mine was the largest mining operation around Landsman Camp. It involved the Athletic Mining Co., a mining outfit from Fort Smith, Arkansas. It was a small, 30-man outfit that operated a 100-ton-per-day capacity flotation concentrator. Consisting of a ball mill and four flotation machines, the extraction of lead and zinc involved several chemical reagents such as lime and cyanide.

A decrease in the metals market coupled with rising costs involved in transportation, due to the remote operations, forced the company to fold by 1957.

The small settlement of Stanley was founded in 1906 and named after nearby Stanley Butte, eight miles south of San Carlos Lake. Nearby mines include the Copper Belle deposit, having produced several car loads of ore, and the Starlight Mine, which was one of the earliest in the area. It was worked by Spanish and Mexican miners, as evidenced by multiple glory holes and an adobe smelter in 1886.

Although mining in the area has declined since the mid-20th century, the area has been a draw to mineral collectors.

Minerals at the Landsman property include fluorite and manganbabingtonite, a calcium manganese iron silicate hydroxide found in veins containing galena and sphalerite in limestone and shale. These collectible dark-brown bladed crystals are found up to 7 millimeters long.

Nekoite, a calcium silicate hydrate mineral, is also found on the property

His other books are “Chiricahua Mountains: History and Nature,” “Southeastern Arizona Mining Towns,” “Zenith on the Horizon: An Encyclopedic Look at the Tucson Mountains from A to Z,” “Tucson Mountains,” “Arizona-Sonora Desert Museum” with Peggy Larson and “Sentinel to the North: Exploring the Tortolita Mountains.” Email Ascarza at mining@azstarnet.com

They stand as testimony to Arizona’s commitment to energy production and metal refinement.

Cates resigned as president of Phelps Dodge in 1947, following years of growth.

Mine Tales: Tombstone-area mine produced mineral for paint

The Charleston Mine produced lead and zinc along with byproduct metals: gold, silver and copper.

Mine Tales: Jerome's "crookedness" railroad dates back to 1894

The first railroad in Jerome, a premier Arizona copper mining town with billion dollar views, was the United Verde and Pacific Railway charter…

The Grand Reef Mine, with the discarded remains of a boiler below in Laurel Wash, near the ghost town of Aravaipa.

A view along the precipitous slope of the Grand Reef outcrop.