Read Today's E-Edition
Share This
Mine Tales: Though not exactly Texas, Arizona does have oil
Share this
1 of 2 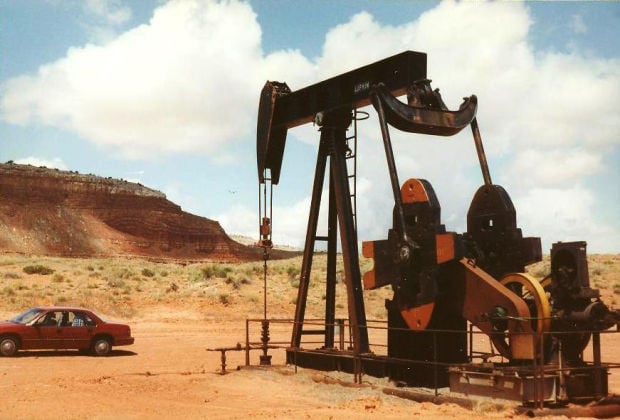 The well by the red mesa is the Shell 2 Navajo well at East Boundary Butte Field. 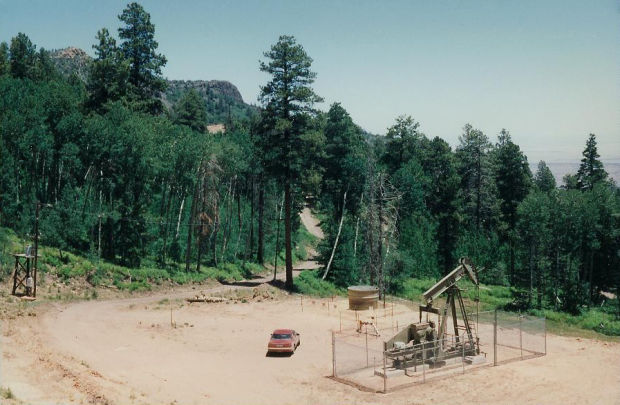 The well in the Ponderosa Pines is the Kerr-McGee 6 Navajo-88 well at Dineh-bi-Keyah Field. -- Credit: Courtesy of Steve Rauzi and the Arizona Geological Survey

Oil discovery in Arizona dates to 1905 with the drilling of a 2,000-foot well in the Chino Valley, 20 miles north of Prescott. A series of speculative ventures and explorations in oil drilling occurred over the ensuing decades, followed by the discovery of helium, an industrial gas that has become a major industry in the state.

Many of the oil deposits have been found on land belonging to the Navajo people. Established on June 1, 1868, the early boundaries of the Navajo Reservation resulted from a treaty signed by the United States and the Navajo Nation. The Navajo government became centralized after oil was discovered on the reservation in 1921.

The first Navajo Tribal Council, created by the U.S. Department of the Interior in 1923, was established to grant mineral leases. Approved leases to American oil companies for exploration followed.

The largest producing oil field in Arizona is Dineh-bi-Keyah, which means “The People’s Field.” It’s 36 miles south of the Four Corners Monument in the Lukachukai Mountains at the north end of the Chuska Mountains near the border with New Mexico.

The Kerr-McGee Corp. discovered an igneous sill (intrusive rock formation) full of oil in 1967 on a large anticline (a geologic fold structure sought after by petroleum prospectors for oil). The sill, on the Navajo Reservation in Apache County, now occupies 3,000 acres at an elevation of more than 6,800 feet.

The discovery well, Kerr-McGee Navajo No. 1, was drilled in excess of 3,864 feet. The next several decades saw the completion of more than 30 productive wells averaging 3,600 feet in depth on 80-acre spacing.

The completed wells’ costs averaged $130,000, and the Texas-New Mexico Pipeline served as the market outlet.

Other than being used to inflate balloons and blimps, helium is used in low-temperature cooling systems, welding and leak-detection systems for pipes.

The Kipling Petroleum Co. discovered helium at Pinta Dome, 20 miles east of Holbrook, in 1950. Pinta Dome produced gas containing 8 to 10 percent helium and is the only field in the world where helium is the exclusive product.

Commercial production of helium in Arizona began in 1961 with the state’s first helium extraction plant producing 9 billion cubic feet of gas over 15 years.

Today, Nacogdoches Oil and Gas Inc. operates the Dineh-bi-Keyah field, which produced 49,972 barrels of oil in 2012.

Arizona is credited with having produced 51,949 barrels of oil from 21 producing wells that year.

The quest for oil and helium deposits in Arizona will undoubtedly continue as more wells are drilled at prospective sites throughout the state.

William Ascarza is an archivist, historian and author. His latest book, “The Chiricahua Mountains: History and Nature,” is available at Barnes and Noble online. Email him at mining@azstarnet.com

Tucson historian William Ascarza will lead a tour, “A Traverse of the Old Mount Lemmon Control Road" on April 8, and “Fairbank, Dragoon Stage Station and Presidio de Terranate," on April 15. The tours are organized through Pima Community College. Cost per tour starts at $99, which includes transportation. To register call 206-6468. For more information call 206-6579.

At least 27 dead in Colombia landslide that buried a bus

At least 27 dead in Colombia landslide that buried a bus

The well by the red mesa is the Shell 2 Navajo well at East Boundary Butte Field.

The well in the Ponderosa Pines is the Kerr-McGee 6 Navajo-88 well at Dineh-bi-Keyah Field. -- Credit: Courtesy of Steve Rauzi and the Arizona Geological Survey