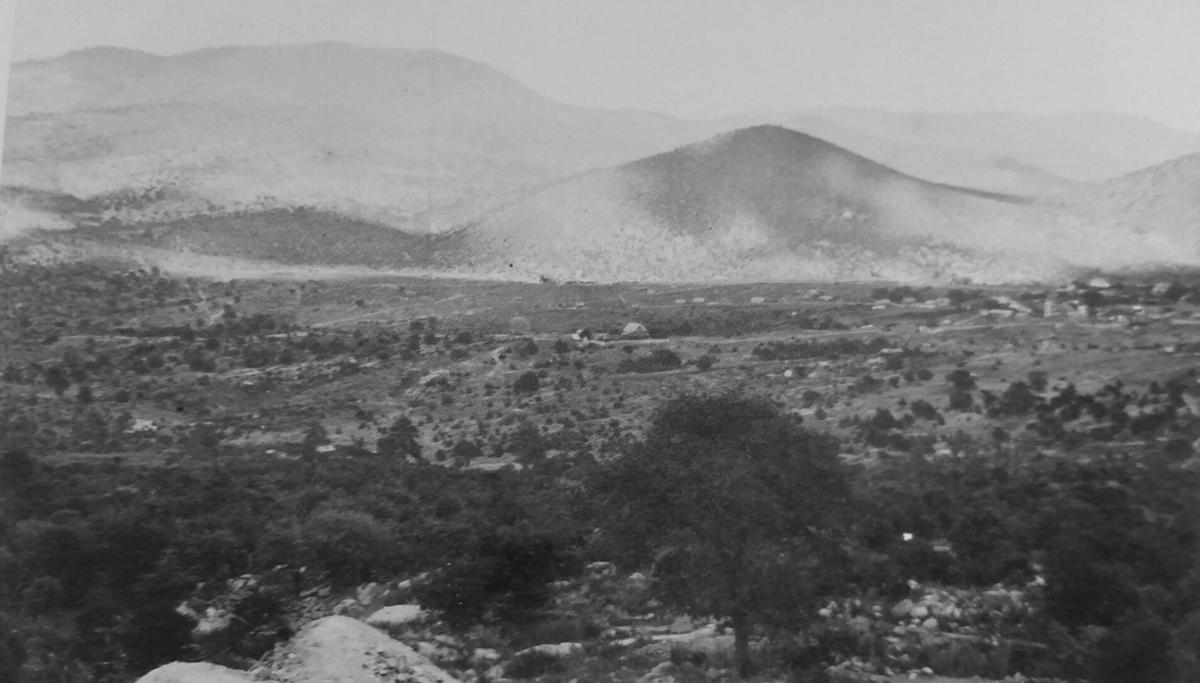 View of the topography and town of Pinos Altos circa early 1900s. 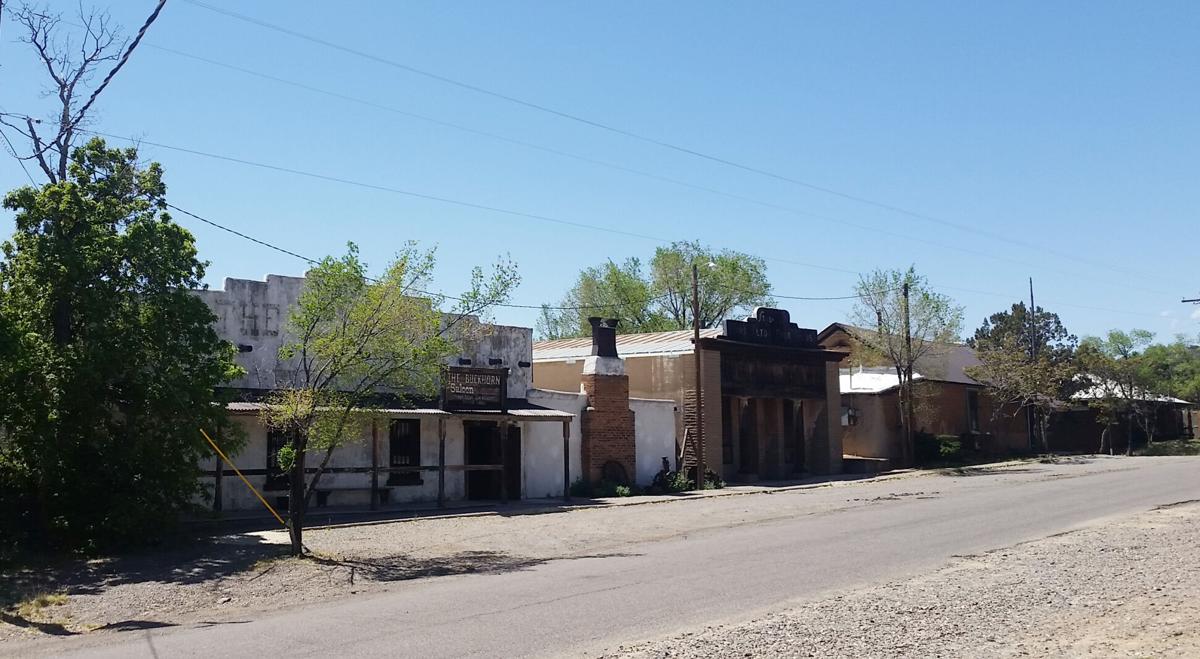 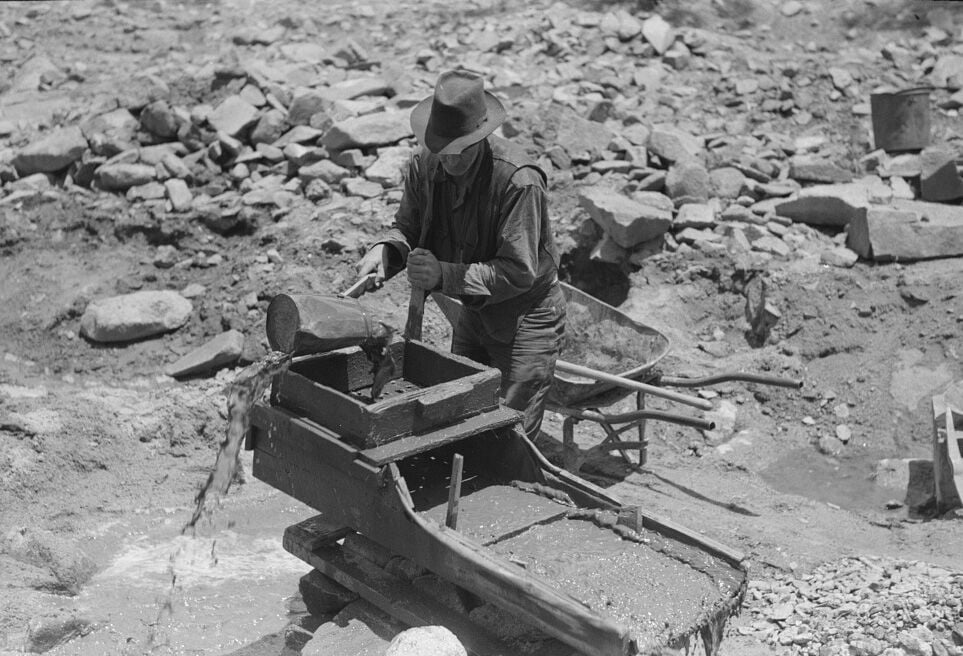 Gold prospector in Pinos Altos pouring water through “rocker” in 1940. The heavy gold settles to the bottom behind the ridges 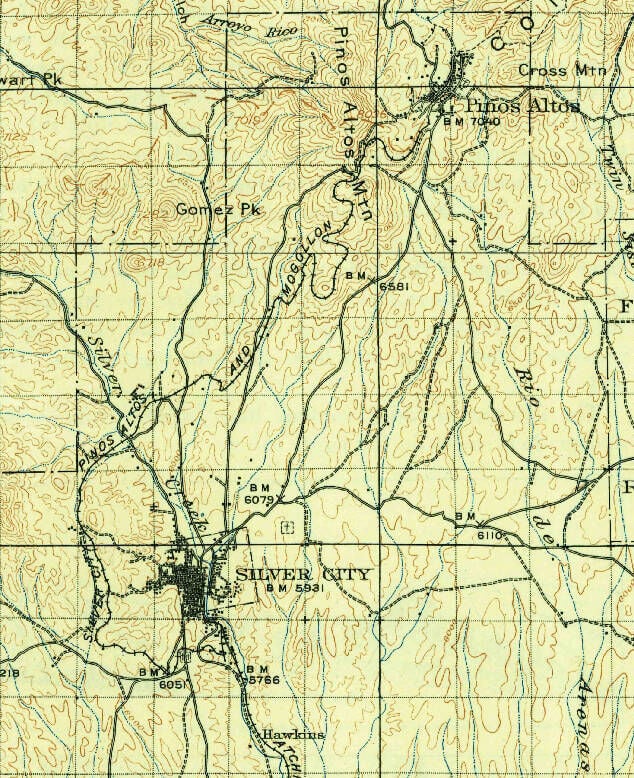 Climbing 1,100 feet from Silver City to Pinos Altos using 48 bridges or trestles with 15.4 miles of track at grades of 1.5 to 6 percent; the Silver City, Pinos Altos and Mogollon Railroad was a six mile narrow gauge railway serving mining operations along the Continental Divide. 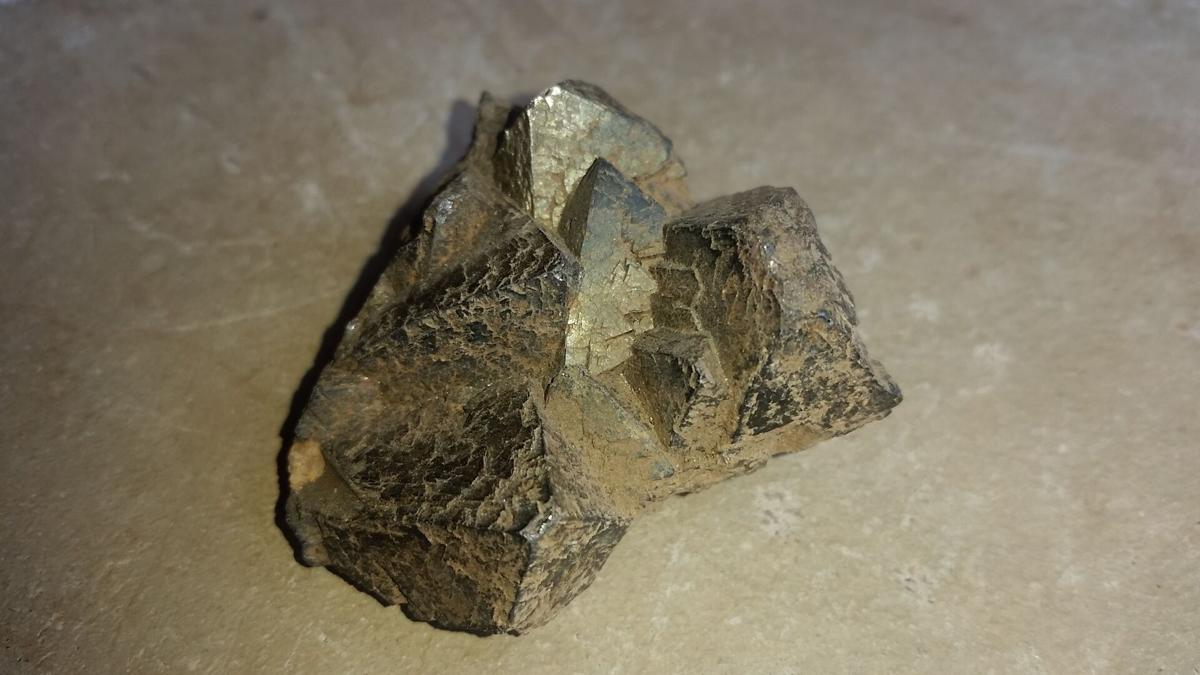 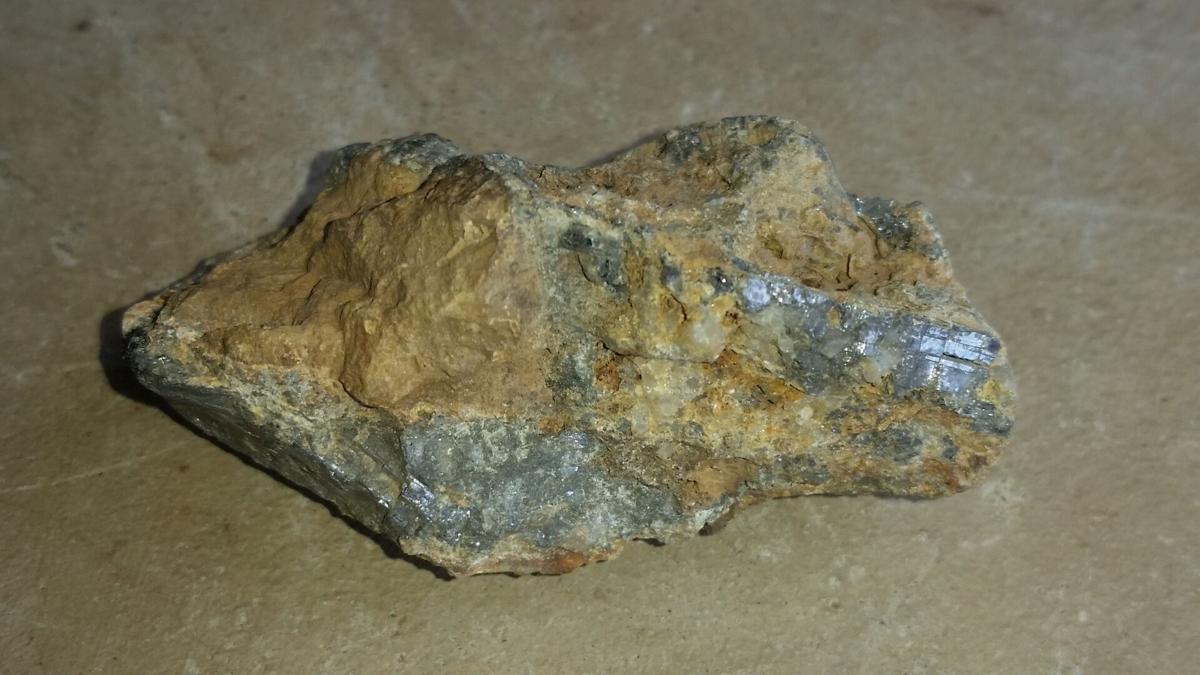 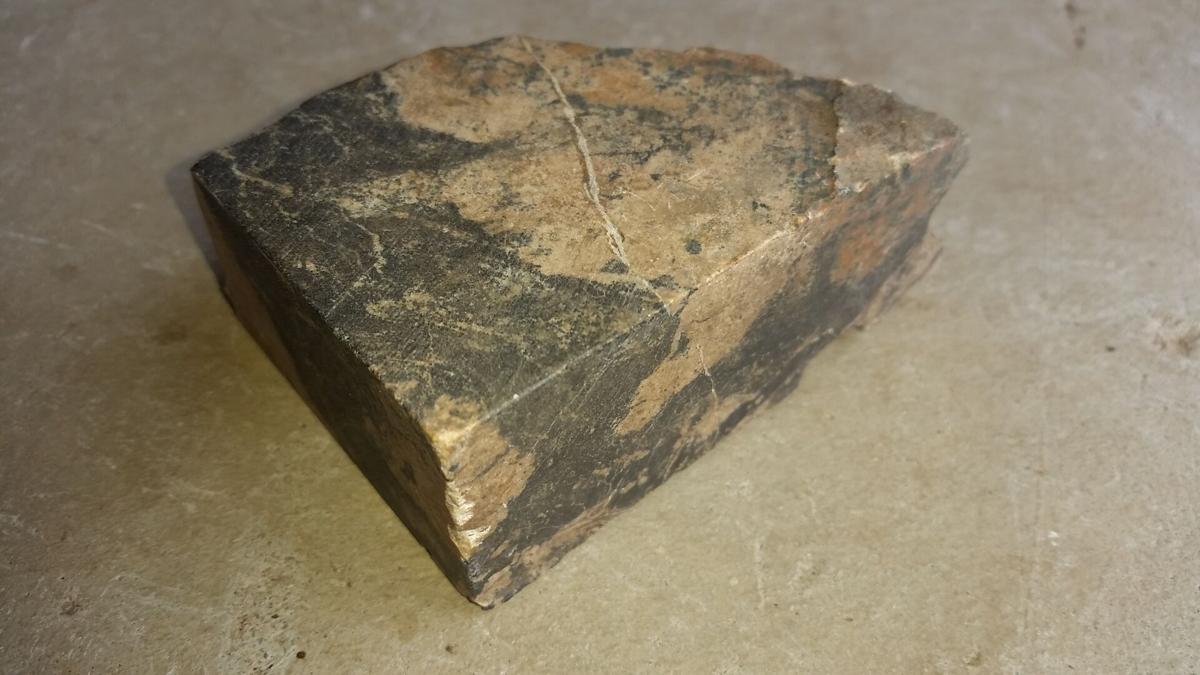 Silver ore in cut host rock from the Silver Cell Mine in the Pinos Altos Mining District.

Southeastern Arizona mining history was influenced by earlier mining operations in New Mexico. One such was the gold discovery at Pinos Altos (High Pines). It is located 8 miles north of Silver City on the Continental Divide at an elevation of 7,067 feet on the eastern slope of the Pinos Altos Mountains in Gila National Forest.

The geology of the area encompasses a broad uplift comprised of andesitic volcanic rocks and sedimentary rocks with Laramide intrusions and mineralization. Mineralization is apparent in the mine dumps, including hypogene and supergene sulfides along with oxides of copper, zinc, silver and lead.

Veins in the district are known to have produced large amounts of gold in gangue quartz-pyrite. Placer deposits are found around sulfide-gold-silver veins with gold concentrations in gulches beneath oxidized vein outcrops.

The mine originally was known as the “El Dorado of New Mexico.”

Mexican records from the city of Chihuahua mention that Gen. Pedro Alemendares, commandant of the Mexican outpost of Santa Rita del Cobre, and his garrison of men comprised of soldiers and convicts were tasked with oversight of a deposit of native and red oxides of copper. It was also his duty to protect local miners from Apache depredations.

Gold was discovered in 1837 by Alemendares. After the Mexico War a decade later, and the Treaty of Guadalupe Hidalgo, the land was opened up to United States prospectors.

In May of 1860, Colonel Jacob Snively led a group of forty-niners comprised of prospectors James Hicks and Robert H. Birch. While stopping for water at Bear Creek, Birch noted the presence of gold bearing rock, and upon his first pan of dirt yielded eight cents worth of gold.

News spread, enticing more than 1,500 prospectors from California, Texas and Mexico, and soon the settlement christened Birchville was established.

Miners were profiting up to $15 daily removing gold from veins and from placer deposits in washes and streams located on the east side of the range.

It was around this time that the Atlantic, Pacific and Locke (Mountain Key) Mines were discovered and the surface ore deposits were processed by arrastras.

Apache raids were always present and one of the severest occurred on Sept. 27, 1861. Five hundred Apache raiders led by Mangas Colorados and Cochise succeeded in forcing the temporary abandonment of the area by the miners.

In 1864, the area was renamed Pinos Altos by Mexican miners who attempted to renew activity, which was hindered by multiple Apache raids on the settlement.

Concerted efforts to mine the area followed with the establishment of the Pinos Altos Mining Co., organized in 1866. That year, Virgil Mastin introduced the camp’s first stamp mill to process ores, notably from the Atlantic Mine. Prior, the dominant tools of the trade included pans, “rocker boxes”, sluices and the burro-driven arrastras. Dredges were later employed in the late 1930s to extract gold from Santo Domingo Creek. The most productive gold placers were found at Bear Creek.

Prominent investors in the Pinos Altos Mines included Samuel Bean and his brother Roy Bean, who established a merchandise store on Main Street. Roy Bean was destined to become justice of the peace in Texas and hold the sobriquet “law west of the Pecos”.

Much later the George Hearst estate, which also owned interest in the renowned Comstock Lode and Homestake mines, acquired mining property in the area. Credited with having established the Pinos Altos Gold Mining Co., it also acquired the Silver City Reduction Works during the late 1890s. That same year, it was asserted by some sources that more than $3 million in placers and gold ledges were produced from the mines at Pinos Altos.

Silver City was thereafter founded and several years later the county seat was moved there from Pinos Altos. Silver City would eclipse Pinos Altos in mining operations in the early 1900s.

Yankie had ties to the Copper Mountain Mining District in Arizona Territory, having explored the Frisco River and Chase Creek in February 1870 and locating the Arizona Central Mine.

The Pacific Mine was discovered by Capt. Thomas J. Mastin of the Arizona Scouts under the Confederacy. Divided into 100-foot claims, the mine had 31 stamps going by the late 1860s.

It made news in 1914 when lessees Ira Wright and James Bell struck 1,800 pounds comprised of high grade gold ore valued at $43,000. It was marketed as the single richest gold shipment per pound received by the San Francisco mint up to that time.

The Silver City Reduction Works was built in Silver City to process the ores from the Pinos Altos Mining District. Other improvements followed with the erection of a narrow gauge railroad in 1906 that connected the nearby mines to the Silver City Smelter.

Gold production in the district decreased in the early 20th century. Zinc would later replace gold as the primary metal mined in the district. The Empire Zinc Cleveland Mine located on the west side of the range produced the metal in the 1940s. Going forward, high holding costs hindered extensive development of mines in the district.

Today, Pinos Altos is a quiet rural community with a rich mining past and active mining claims.

How a Jordanian travels the world from his basement

View of the topography and town of Pinos Altos circa early 1900s.

Gold prospector in Pinos Altos pouring water through “rocker” in 1940. The heavy gold settles to the bottom behind the ridges

Climbing 1,100 feet from Silver City to Pinos Altos using 48 bridges or trestles with 15.4 miles of track at grades of 1.5 to 6 percent; the Silver City, Pinos Altos and Mogollon Railroad was a six mile narrow gauge railway serving mining operations along the Continental Divide.

Silver ore in cut host rock from the Silver Cell Mine in the Pinos Altos Mining District.