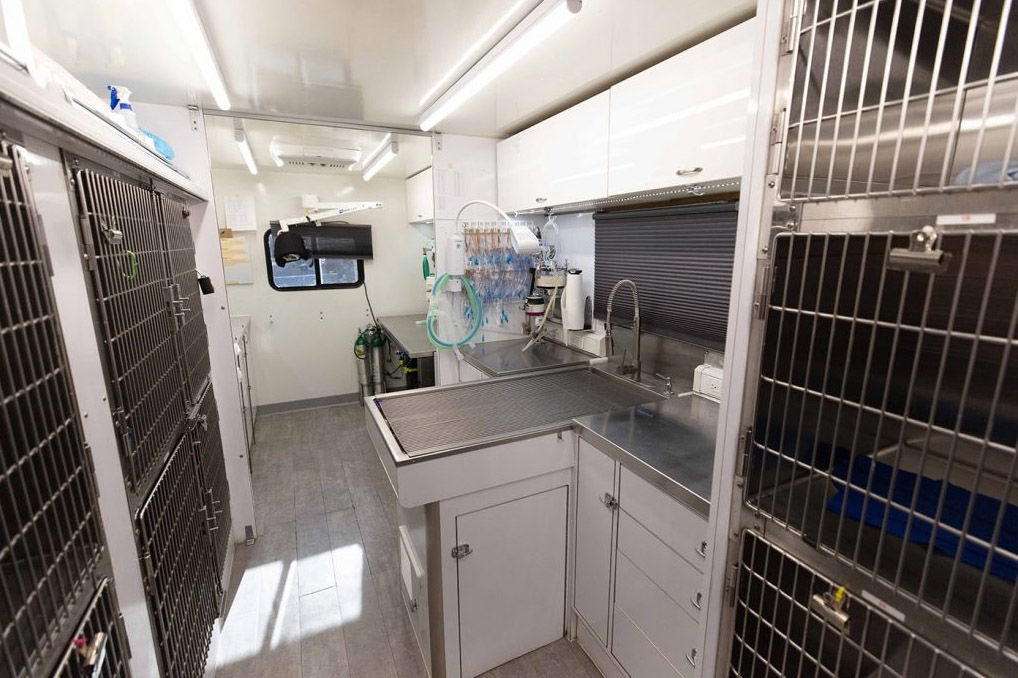 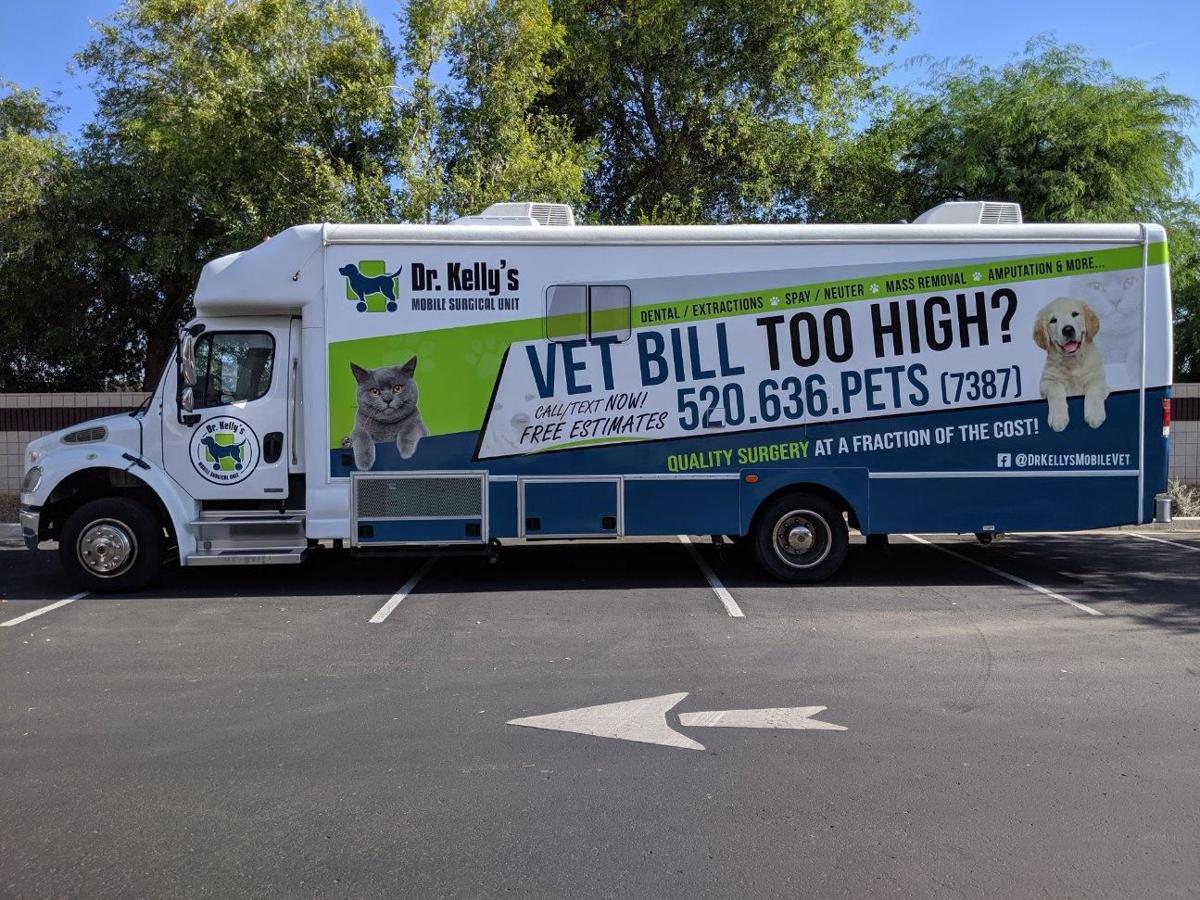 Dr. Kelly’s Mobile Vet is coming to Tucson, with a “soft start” scheduled for September while it gets its surgical capabilities up and running.

Dr. Kelly’s Mobile Surgical Unit — which has been providing pet owners across Phoenix with low-cost microchipping, vaccines and surgical services since 2016 — is holding its Tucson “soft start” beginning next week.

The model is simple: Dr. Kelly’s parks its mobile hospital at various locations throughout the week, posting those locations and times on its website and Facebook pages. Clients just have to call or email to get estimates and set up appointments.

The mobile vet units include hospital-grade surgical equipment and staffed with doctors who have worked in traditional vet hospitals and clinics. The doctors have already performed thousands of procedures available on the mobile units, including spay and neuter surgeries, mass removals, dental cleaning and more.

While Dr. Kelly’s offers a host of surgical options, the doctors don’t perform orthopedic procedures, diagnostic exams and hospitalizations, and the mobile units don’t make house calls. Treatment is only available for cats and dogs — no exotic animals, farm animals or pocket pets.

During the beginning weeks in Tucson, Dr. Kelly’s will be focusing its care predominantly on vaccines, wellness checks and microchipping, while it finishes up the licensing necessary to perform surgical services on its new mobile unit.

Doug Patriquin and his wife, Dr. Kelly, were franchise owners of a Banfield Pet Hospital in Phoenix for nine years until the parent company was sold. From there, they purchased a mobile unit and performed spay and neuter services, the majority of their business coming through contract work with Maricopa County.

The contract ended, and with plenty of clinics offering low-cost spay and neuter surgeries, Patriquin and his wife shifted their focus to offering affordable options of other high-value surgeries. .

“Our main client base is people who don’t have a vet. They don’t go to the vet every six months and get blood work. All they know is that for the last eight years their dog has been healthy and now his teeth are really bad or now that mass on his side is really big,” said Patriquin. “So they take him to a regular vet and the pricing model for the vet is too high, so they have to walk out with the emotional impact of not being able to care for their pet the way they want.”

With most surgeries costing in the four-digit range, some pet owners are forced to choose between paying rent and caring for their cat or dog. Believing that’s a choice no one should have to make, Patriquin and his wife opened their first mobile unit.

Dr. Kelly’s now has three units in Phoenix, the company’s growth bolstered by its partnership with other pet-related industries and businesses who are not in the industry but recognize the need for its services.

“I’d love to say it’s significantly less expensive to run one of these mobile units than it is to have a brick-and-mortar place, but it’s pretty close to the same,” Patriquin said, adding that constantly running air conditioners and generators on the units are quite costly. “But, there’s a big market for people that just want affordability .”

Since its 2016 launch, Dr. Kelly’s has been performing spay and neuter surgeries for Arizona rescue groups, including The LovePup Foundation and The Sanctuary Project. Amy Cubillas, who runs The Sanctuary Project, told Patriquin of the need in Tucson and encouraged the business to expand, even offering for him to park the mobile unit on her family’s property.

“We had a calling from the community,” Patriquin said. “There was an opportunity for us to come down here and meet some of the market that wasn’t being met.”

After purchasing the unit and finding a doctor, the idea is now on its way to becoming a reality.

One of Dr. Kelly’s program managers from Phoenix has relocated to Tucson to help get the business up and running. The idea is to continue to expand the business to Utah, California or Colorado, Patriquin said.

“Every community is struggling to make a thousand dollar payment when it comes up as a surprise,” Patriquin said. “Our mission is to help client and pets feel better, emotionally, financially and physically.”

On Sept. 30, Dr. Kelly’s will be stationed outside Pima Animal Care Center. PACC hosts on- and off-site microchip and vaccine clinics several times a year with much success, and shelter officials anticipate a large turnout for this event as well.

“Ever since we posted this event online, the buzz around it has been huge,” said PACC spokeswoman Nikki Reck. “This community is very pet-friendly and pet owners want to make sure their pets have everything they need.”

Dr. Kelly's will be posted up at spots across Pima County throughout the month of September. Either call 626-PETS or email tucappt@drkellysmobilevet.com to book an appointment on the date and location of your choice. Mobile clinic hours are 7 a.m. to 3 p.m.

As outreach efforts grow, concerns arise about allowing the homeless to adopt pets in the first place.

Local criminal justice officials are at odds over how to deal with the rise in methamphetamine and fentanyl abuse in Pima County.

Wyllow Brewer had been dead for some time before she was rushed to the hospital the morning of Feb. 19, 2017, officials say.

A hiker was taken to the hospital after falling on a hiking trail, officials say.

The screening will be preceded by a resource fair, with information for attendees on local mental health treatment, education and outreach organizations.

The ordinance change would raise the minimum age to buy tobacco products and e-cigarettes within Pima County and Tucson city limits from 18 to 21.

The Tucson City Council will discuss the issue during a study session this afternoon.

Dr. Kelly’s Mobile Vet is coming to Tucson, with a “soft start” scheduled for September while it gets its surgical capabilities up and running.