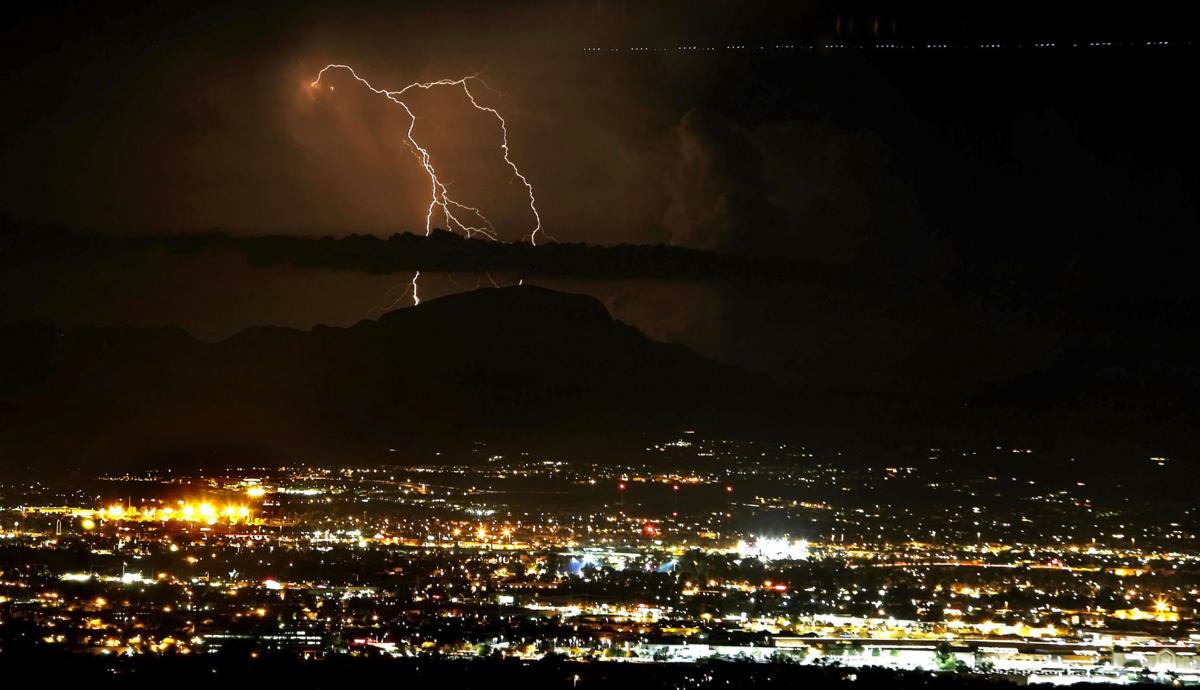 Monsoon moment: Lightning strikes and the light from an aircraft landing at Tucson International Airport dazzle the sky southwest of downtown Tucson on Aug. 6. 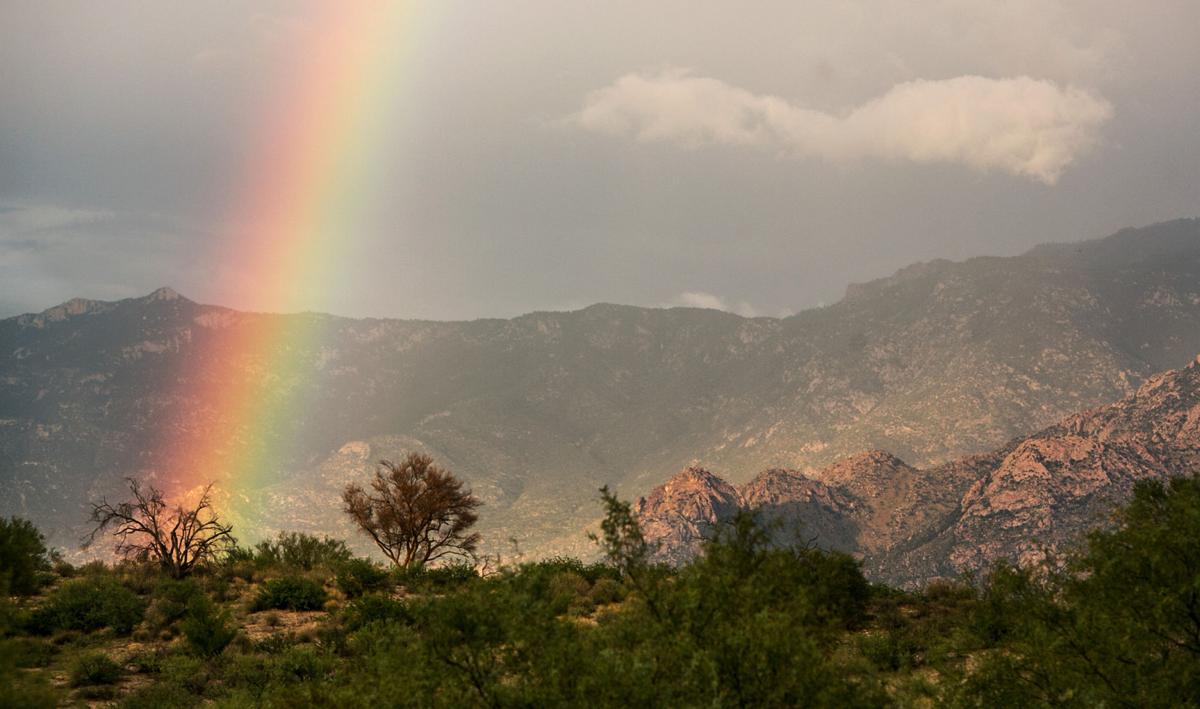 Monsoon 2016 brought wind, rain, hail and many moments of beauty.

Monsoon 2016 had a bit of everything: dangerous downbursts that flooded streets and swept vehicles down arroyos; gentle day-long showers fed by tropical storms; “popcorn” thunderstorms that hit quickly and randomly; skies streaked red and gold at dawn and dusk.

The rain disappeared for weeks at a time, then came back in drenching bursts. The weed crop was healthy and prodigious; the seasonal rain totals mostly above normal.

Precipitation during the official monsoon season of June 15 to September 30 was simply average in the low deserts around Phoenix, but well above it in Tucson, Southern Arizona and most of the mountain regions of the state.

Even the official gauge at Tucson International Airport, known for being an under-achiever, collected 20 percent more rain than its usual 6.08 inches.

“I don’t think too many people were left behind by this one,” said University of Arizona climatologist Mike Crimmins, who compiles and interprets water and weather data for CLIMAS, the Climate Assessment of the Southwest.

The UA’s rainlog.org, which collects daily rain-gauge reports from citizen scientists throughout the state, recorded rain totals well-above normal throughout the Tucson area.

There were a few dry spots in the hit-or-miss patterns of fast-moving thunderstorms. “It’s not uncommon for areas at the intersection of these storms to miss out,” Crimmins said.

Likewise, it is not uncommon for some areas to be slammed by storm after storm. Readings in some north-central neighborhoods were in excess of 13 inches.

That rain magnet, centered near North Tucson Boulevard and East Grant Road, “had at least six events over an inch and a half if not greater,” said Crimmins.

The area was first hit by a rare June thunderstorm — a wet microburst on June 26 that dropped up to 3 inches of rain in half an hour and generated outflow winds of 70 mph. It knocked over towering pines and mature mesquites from Winterhaven to Himmel Park.

The National Weather Service sets June 15 as the first day of the monsoon season, though rain isn’t really expected until the first week of July.

This year, after weeks of searing heat in mid-June that killed three hikers who ventured too far without enough water, storms swept northward two weeks ahead of schedule.

Tucson officially recorded 1.29 inches of rain in the second half of June — eight times the norm in what is usually a very dry month.

By July 2, though, the rain clouds had disappeared and would not return to Tucson for two weeks, with no significant moisture until the end of the month when a week of scattered thunderstorms made daily life treacherous for motorists.

August was mostly dry. The notable exception was Aug. 8, when morning storms dumped 2 inches or more in parts of town, flooding streets during rush hour and leading to eight swift-water rescues, including that of Pima County Supervisor Sharon Bronson.

The August dry spell continued into the first week of September, interrupted by approaching Tropical Storm Newton. Newton, which made landfall on Mexico’s mainland as a hurricane, lost its tropical storm status as it crossed into Arizona near Nogales.

It reached Tucson in the early morning of Sept. 7 as a persistent, gentle rain of more than an inch over the entire metro area.

That was it for September — until the past week when a wind pattern that had already changed from southerly monsoon to winter westerlies picked up moisture from Tropical Storm Roslyn as it dissipated in the Pacific Ocean.

In Phoenix, where thunderstorms bring dust as often as they do rain, the monsoon was about normal — 2.47 official inches of rain and a handful of haboobs, said meteorologist Ken Waters.

The Sky Harbor Airport gauge, while it provides a good historical measure of precipitation, misses the diversity of the monsoon experience, Waters said.

“It has been a mixed bag. The West Valley was kind of the winner and the East Valley was quite a bit below normal. We had pockets that were twice the normal rainfall.”

In Southern Arizona, most towns in Cochise and Santa Cruz counties recorded totals at least 20 percent higher than normal.

Some areas of northern Arizona had twice the normal rainfall, Waters said. The mountains caught the clouds throughout the state. Nearby Mount Lemmon recorded more than 24 inches of rain.

November was warm, despite current cold

Near-freezing temperatures this week kept Tucson form vying for the monthly record, but 2016 is the warmest Fall ever recorded.

Newton could have been scary; instead, it was beautiful.

Tucson's monsoon so far: abnormal but not unprecedented

When it was wet, it was very, very wet.

Yes, Tucson's October was warm — the warmest on record

Record temperatures are fooling some plants into blooming and keeping mosquitoes active longer.

Eight of Tucson's 10 warmest years have occurred since 2003.

A burst of high winds this afternoon in Green Valley toppled a palo verde tree.

Monsoon moment: Lightning strikes and the light from an aircraft landing at Tucson International Airport dazzle the sky southwest of downtown Tucson on Aug. 6.

Monsoon 2016 brought wind, rain, hail and many moments of beauty.