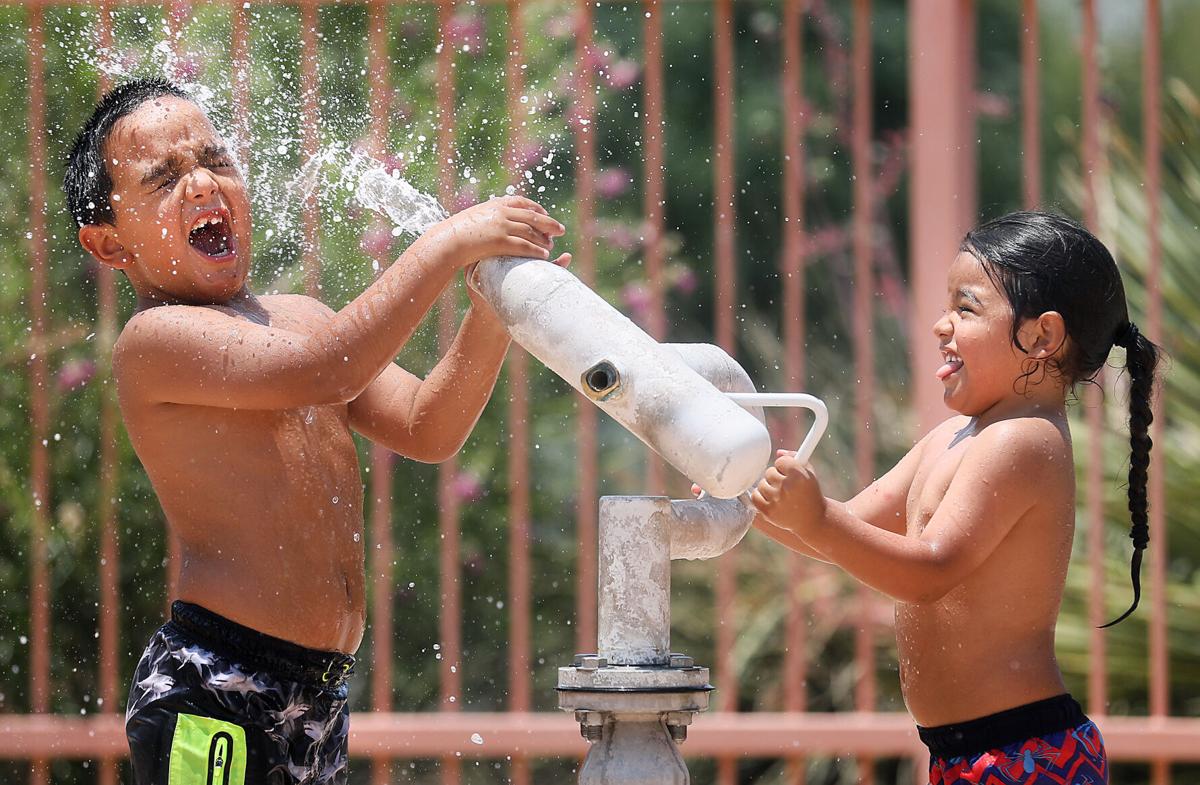 Angel Roman, 4, right, gets a direct hit at his brother, Junior, 6, while playing at the splash pad at Catalina Park. The official start to the monsoon has arrived, and the forecast includes a small chance of afternoon showers later in the week. 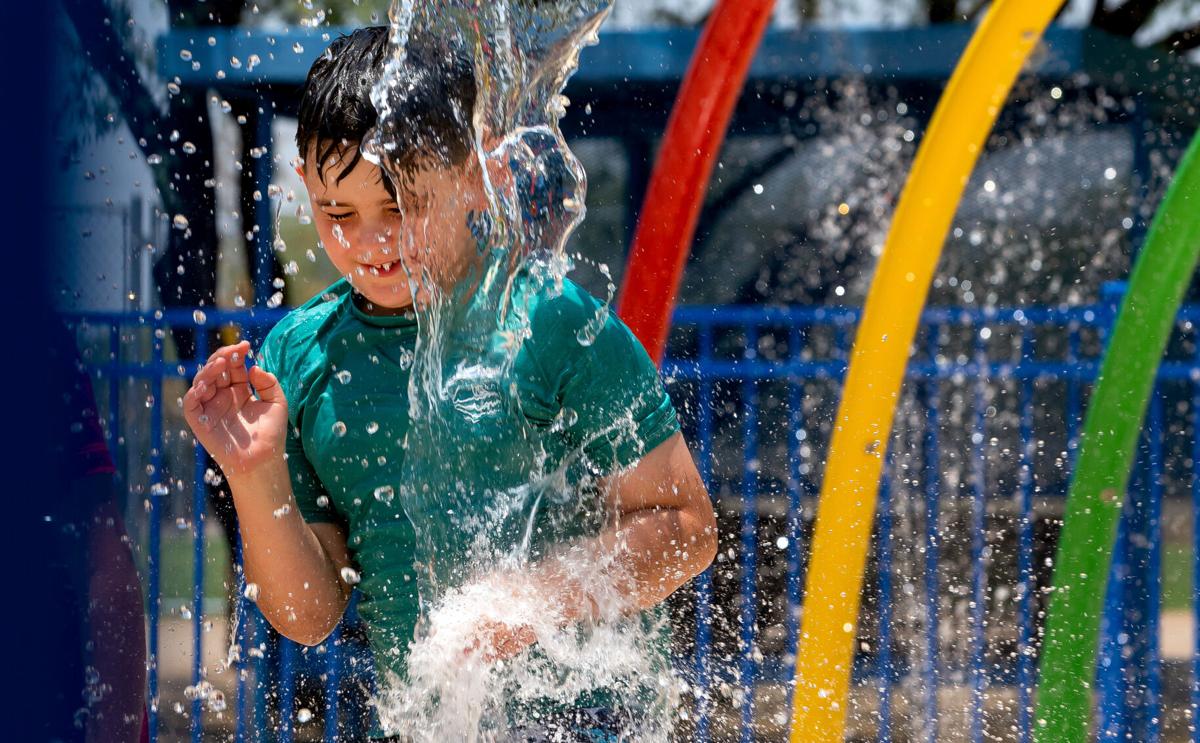 Jonathan Schaller, 6, gets doused by a bucket of water at the Wet Saloon splash pad at Brandi Fenton Memorial Park.

Monsoon season officially gets underway in Southern Arizona on Tuesday, June 15, and the National Weather Service is already predicting a slight chance of isolated afternoon showers in Tucson later in the week.

Unfortunately, the forecast also calls for an unprecedented run of 110-degree days between now and Saturday.

Weather Service meteorologist Tom Dang said the only way the current streak could be interrupted is with a perfectly timed thunderstorm that cools things down directly over the official weather station at Tucson International Airport.

Forecasters do not yet know what to expect from this year’s monsoon — their outlook gives a roughly equal chance of wetter, drier or average conditions through Sept. 30 — but it probably won’t be any worse than 2020.

“Never say never, but the odds are slim,” Dang said.

Tucson saw just 4.17 inches of rain all of last year, its lowest annual total in weather records, thanks in no small part to the driest monsoon on record in the Southwest.

There is a 20% chance of rain in Tucson on Thursday, Friday and Saturday.

Dang said there is nothing magical about the monsoon’s annual starting date of June 15.

“It’s just kind of a climatological date that’s picked because, on average, mid-June is when we start to see a seasonal shift in the weather,” he said.

Summer thunderstorms typically account for more than half of Tucson’s annual rainfall. They can also produce high winds, lightning, hail and flooding.

On Wednesday, June 16, the Pima County Sheriff’s Department will hold its annual news conference on monsoon safety, alongside the county’s Office of Emergency Management, the Regional Flood Control District and other community partners.

“Flash floods are the No. 1 storm-related killer,” said Deputy James Allerton, spokesman for the Sheriff’s Department.

Authorities are particularly concerned about water and debris washing down from the area burned by last year’s Bighorn Fire in the Catalina Mountains.

Allerton said people should always be cautious when crossing washes and other areas prone to flooding, especially at night when water depth and speed can be even harder to judge.

“When in doubt, wait it out or find another route,” he said, and always heed posted signs and other official warnings.

“It’s both illegal and dangerous to go around a barrier that says ‘road closed due to flooding,’” Allerton said.

Right now, though, rain is the least of our worries. Much of Arizona, Southern California and Southern Nevada remain under an excessive heat warning that is scheduled to last until 9 p.m. Saturday.

Tucson is in the midst of what could turn out to be six straight days of record-breaking heat. The highs of 110 on Saturday, 112 on Sunday and 112 on Monday were all records for those dates, and the forecast calls for more daily records to fall Tuesday, Wednesday and Thursday.

So far this year, overheating is believed to have played a role in the deaths of 15 migrants in Arizona, said Dr. Greg Hess, the Pima County medical examiner. Hess said six of those deaths occurred since June 1.

Since Wednesday, Allerton said, there have been four heat-related rescue calls on hiking trails in the Tucson area, none involving serious injuries or deaths.

Around noon Saturday, the Golder Ranch Fire District responded to a call about a hiker feeling ill after 30 minutes on the Linda Vista Trail near Pusch Ridge in Oro Valley, said Capt. Adam Jarrold, a fire district spokesman. The hiker was helped from the trail but declined to go to a hospital, he said.

Jarrold said the case shows why it’s a good idea to limit outdoor recreation to early morning or after sunset.

On Monday, when Tucson Fire was dispatched to a west-side house fire on Calle Guadalajara, the department sent along a mobile cooling unit the size of a giant recreational vehicle to make sure fire personnel had a place to cool off quickly after dousing the flames, Colaianni said.

Cooling stations also have been set up around Tucson for people living outdoors or experiencing housing problems.

From noon to 5 p.m. daily, the Salvation Army’s Hospitality House at 1002 N. Main Ave. and its South Community Center at 1625 S. Third Ave. provide indoor heat relief, water, snacks and supplies, with water available at the door throughout the day.

La Frontera RAPP at 1082 E. Ajo Way, Suite 100, has water, snacks and supplies available from 8 a.m. to 4 p.m. Monday through Friday, with indoor heat relief for up to six people at a time.

Already, smoke is blowing into the valley from two sizable blazes north of Tucson.

Dang said some of the smoke is from the Telegraph Fire near Globe, which had burned more than 88,000 acres as of Monday.

The almost-10,000-acre Pinnacle Fire, in a remote part of Graham County between Safford and Mammoth, also sent smoke in this direction, prompting calls to the Tucson Interagency Fire Center about another possible fire in the Catalinas.

+54 Farewell, monsoon season: Photos of the 2020 season in Tucson

Made to be broken

According to the National Weather Service, Tucson is expected to see record-high temperatures through Friday, with a slight chance of rain late in the week.

One year after the Bighorn Fire, research is now underway to understand its impacts and chart the future of the Catalina Mountains.

Unprecedented saguaro 'side blooms' could be a bad sign

Experts are tracking an unprecedented outbreak of blooms in strange locations on saguaros across Southern Arizona. Environmental stresses could be to blame.

According to the National Weather Service, monsoon typically starts June 15. Here's a look back at photos from last year's storms.

Centers will be only daily through Friday from noon-6 p.m.

Damorell Jantel Calhoun is also charged on suspicion of leaving the scene of a March 14 crash that killed Tyler Lindsey Tolleson, 31.

Legislative panels gave initial approval Wednesday to a $100 million plan for fighting wildfires and their effects, but not before debate broke out over climate change and whether humans are responsible for heat and drought that result in huge blazes.

The National Weather Service says Tucson could start to see some monsoon action next week. For now, though, the forecast calls for more record heat.

When Tucson and the rest of the Southwest baked in record heat this month, the most obvious cause was an overpowering, stagnant ridge of high-…

June was deadliest month for migrants in Southern AZ since 2010

Angel Roman, 4, right, gets a direct hit at his brother, Junior, 6, while playing at the splash pad at Catalina Park. The official start to the monsoon has arrived, and the forecast includes a small chance of afternoon showers later in the week.

Jonathan Schaller, 6, gets doused by a bucket of water at the Wet Saloon splash pad at Brandi Fenton Memorial Park.