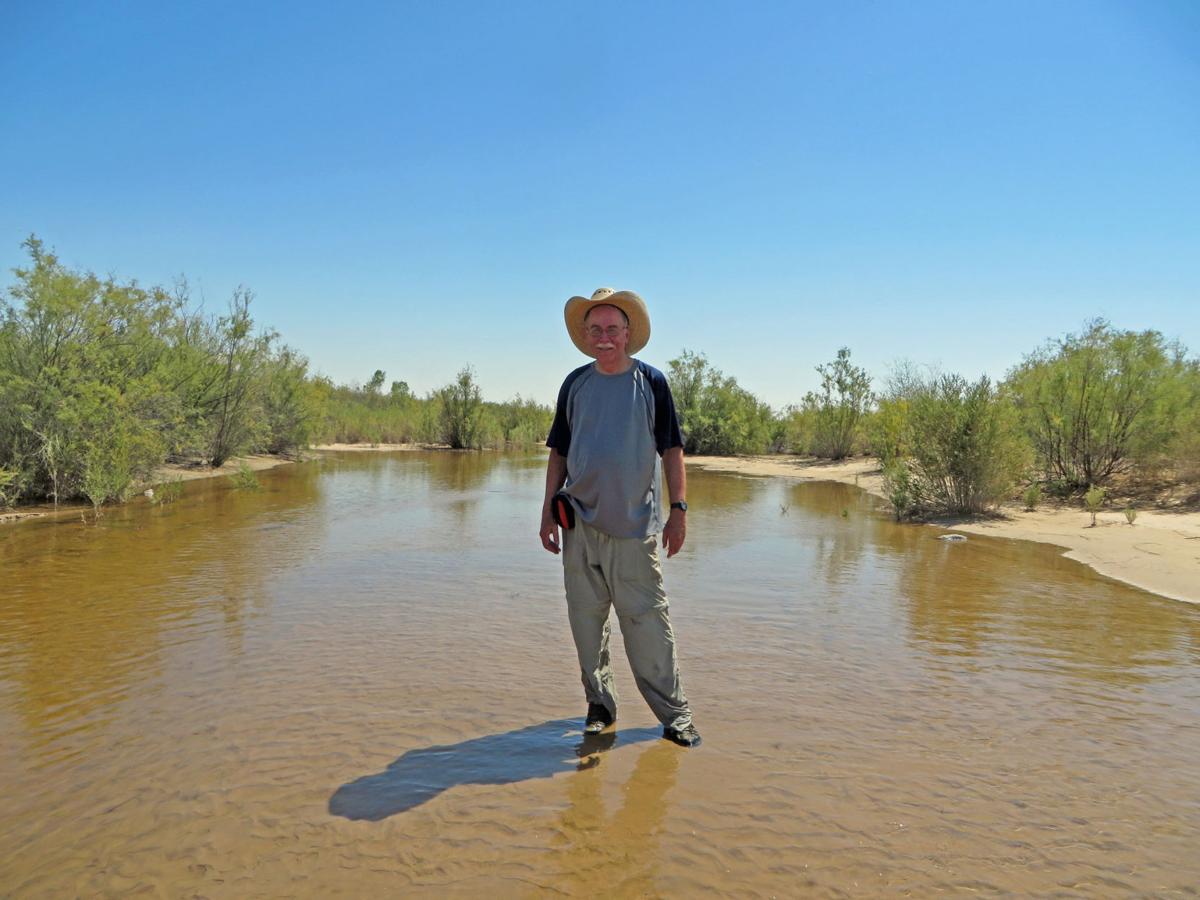 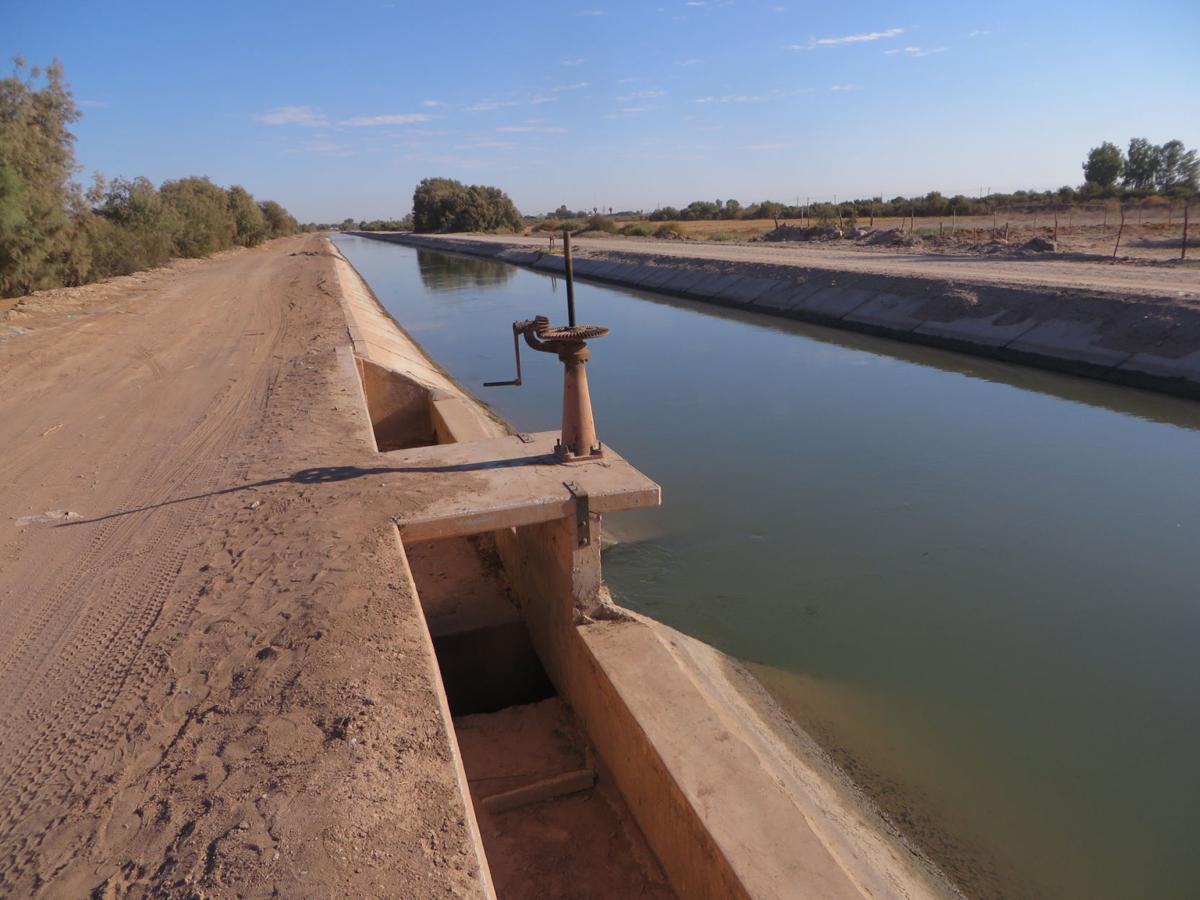 This canal supplies base flows to a Sonoran Institute restoration site in the Colorado River Delta in Mexico. Recent flows have helped nourish 1,100 acres of vegetation. 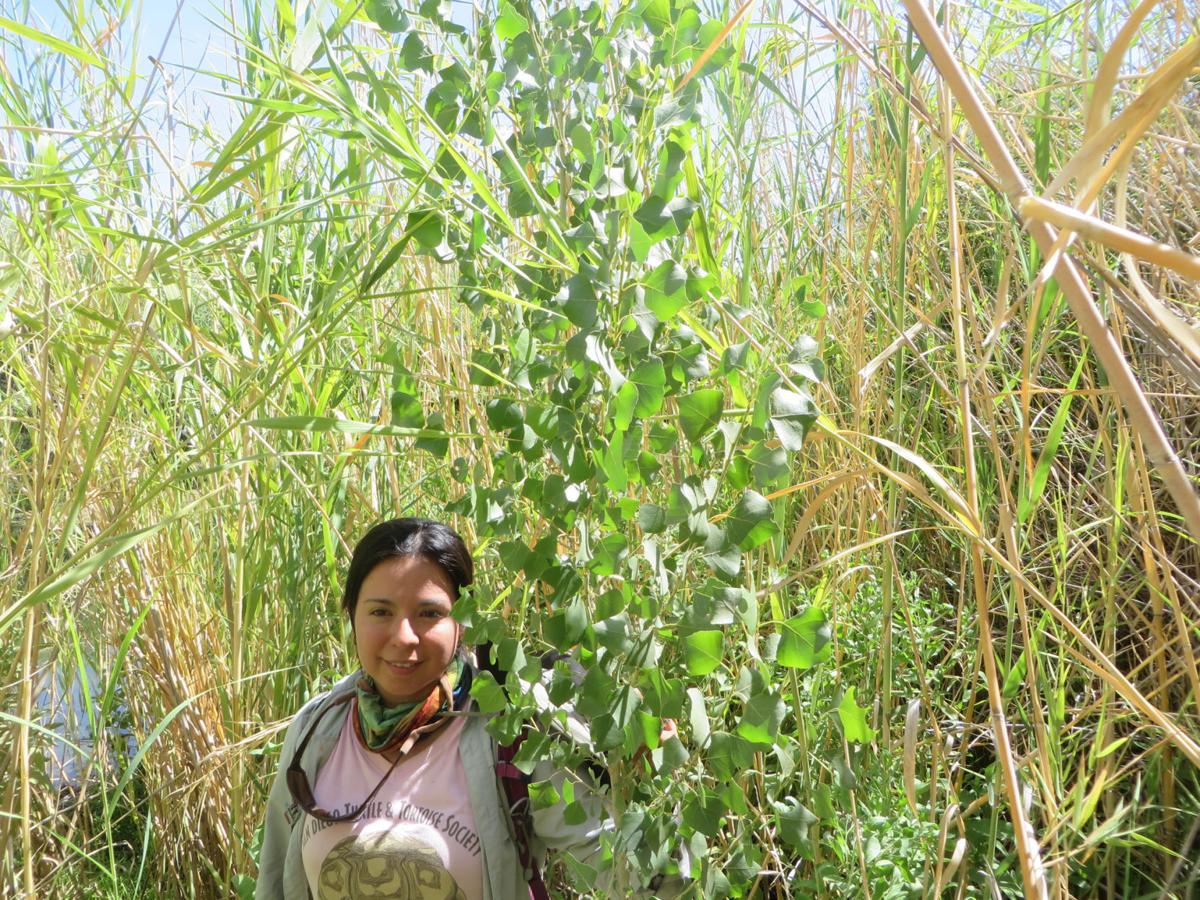 Martha Gomez-Sapiens stands next to a cottonwood that germinated after the pulse flow in spring 2014. Some 100,000 acres of vegetated delta existed a century ago. 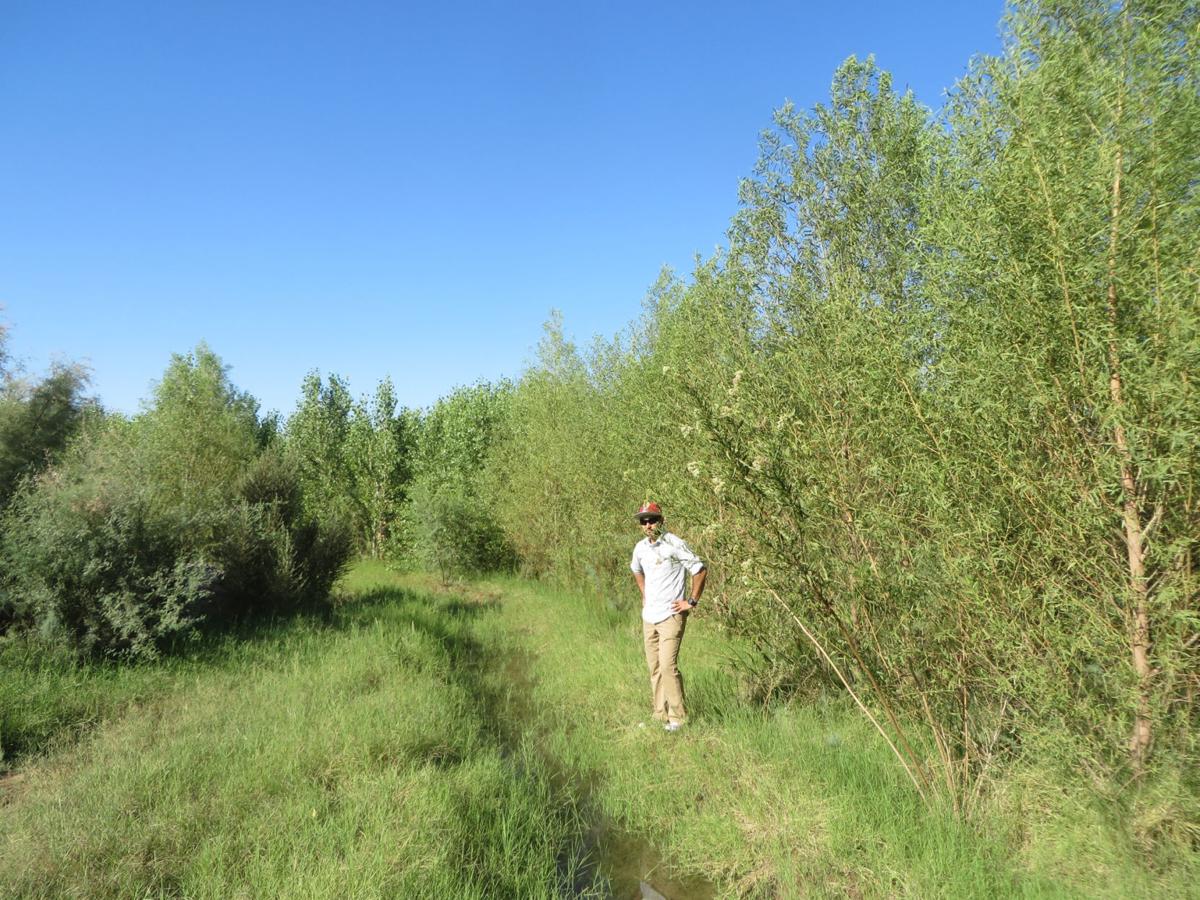 Three-year-old willows germinated and grew since pulse flow; in Sonoran Institute restoration site in the Colorado River Delta in Mexico. 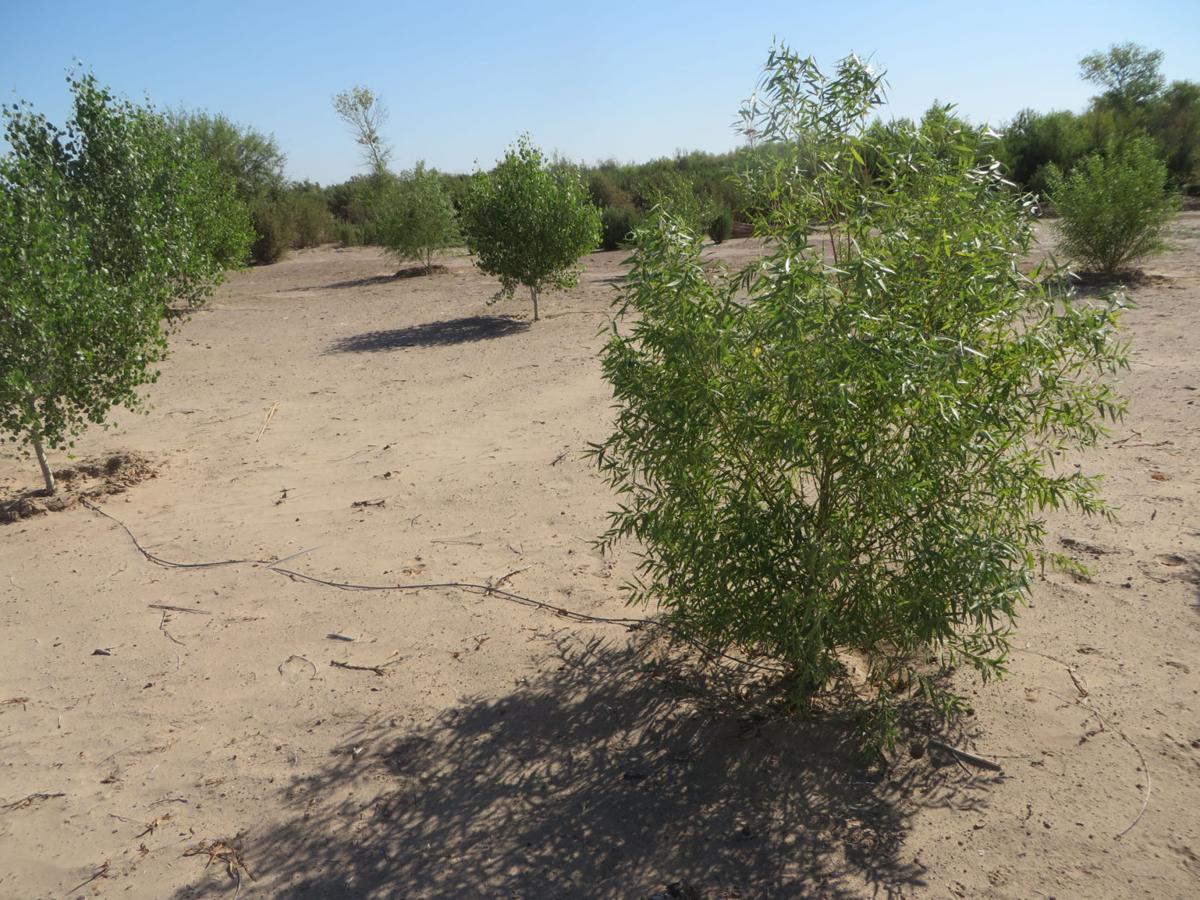 In March 2014, the staged release of water into the Colorado River Delta was an international spectacle.

Thousands of onlookers joined dozens of elected and appointed officials, environmentalists and scientists at Morelos Dam at the Arizona-Sonora border south of Yuma to see the first significant flow of river water into the parched delta for more than 15 years.

Downstream in San Luis Rio Colorado, Sonora, kids and their parents swam and splashed, ecstatic to see a live river again, enjoying the first burst of what was destined to be a “pulse flow” of 105,000 acre-feet into the delta.

Now, a second round of releases is headed to the delta that won’t be nearly as dramatic. But these flows will restore more riverfront with cottonwoods and willows than the last time and their impacts will likely last longer.

The new U.S.-Mexico Colorado River agreement, announced last week, sets aside 210,000 acre-feet of river water for environmental restoration in the delta over nine years, starting next year. This 2017 agreement also calls on the two countries to share shortages on the river in equal proportions in times of drought.

The earlier, 2012 agreement under which the huge pulse flow was unleashed also enabled the more gradual release of another 53,000 acre-feet over four years that will end Dec. 31, 2017.

The first round of flows has restored about 1,100 acres of cottonwood, willow and mesquite habitat, said Osvel Hinojosa, water and wetlands program director for Pro Natura Noroeste and a co-chair of an environmental working group that developed restoration ideas for the new agreement. Pro Natura is headquartered in Ensenada, Baja California.

In that time, more than 230,000 native cottonwoods and willows were planted along the river, said a coalition of six U.S. and Mexican conservation groups calling itself Raise the River. The groups raised more than $10 million for restoration work and to buy water rights for those releases.

This time, the goal is to restore about 4,300 acres over the next nine years, the new agreement says.

Now, “We will see a resurgence of the Colorado in its delta, the ribbon of green that is re-emerging in the Sonoran Desert,” said Jennifer Pitt of the National Audubon Society at last week’s signing ceremony in Santa Fe, New Mexico. “It offers relief to every living being that seeks rest in the cool shade of a cottonwood, renewal in the bounty of life that flows from the waters of the Colorado River. We are finding new ways to share the water, among our communities, but also with hundreds of thousands of egrets, herons, flycatchers, rails and other birds that need it to survive.”

Although smaller pulse flows may be released later, the immediate plan is to focus on lesser, steadier amounts of base flows, Hinojosa said. Pulse flows release lots of water over short periods from a single point such as the dam. Base flows deliver lesser amounts, often over longer periods to specific restoration sites.

“At this point, the best way to proceed with restoration is base flows. That’s the best use of the water,” said Karl Flessa, a University of Arizona geosciences professor who oversaw the scientific monitoring of the 2014 pulse-flow impacts and hopes to be involved in similar work this time.

A lot of the 2014 pulse flow infiltrated into deep groundwater and was not available to nourish cottonwoods and other trees, he said.

“By applying base flows to restoration sites, you make sure water gets to the right place at the right time,” Flessa said.

Hinojosa said he considers base and pulse flows equally valuable, and may want to use smaller pulse flows for social purposes — allowing people living nearby to enjoy water in the river and reconnect with nature.

“We are going to be more efficient now in how we use that water because of everything we learned. That speaks to the importance of dollars invested in science and monitoring,” said Pitt, Audubon’s Colorado River programs director.

The earlier round identified suitable sites for restoration and helped develop best practices for landscaping, planting and irrigation, Flessa added.

This round of restoration will have lots of money.

The new agreement commits the U.S. and Mexican governments and conservation groups to contribute equally towards a total of $18 million for research, monitoring and restoration. A longer-term goal is for those parties to raise a total of $40 million, and double the water for restoration.

The 210,000 acre-feet will come equally from the Mexican and U.S. governments and the conservation groups. The U.S. share will come not in wet water, but indirectly, as part of the $31.5 million the government agreed to contribute toward improving the efficiency of Mexican irrigation systems. That, in turn, will provide more water for other purposes.

“This means that no ‘US water’ will leave Lake Mead for the purposes of restoration in the delta,” Flessa said, referring to the reservoir of Colorado River water on the Arizona-Nevada border.

The 4,300 acres of restoration will still pale in comparison to the 100,000 acres of delta that existed a century ago before the U.S. dammed and diverted all the river’s water before it could reach the delta.

For Pitt, who has worked for delta restoration 20 years, “What’s most important to me in this agreement is that the U.S. and Mexico have an agreement on how to share water in times of short supply ... as the supply decreases.”

With the agreement creating more resilience for the river, water leaders and politicians can support collaborative efforts to restore the delta, she said.

But in Santa Fe last week, Pitt warned that if governments and water users end up fighting over a dwindling supply, the environment will be the biggest loser.

“No politician can support nature when communities are threatened by a water supply crisis,” she said.

Vegetation greened up from Mexican border down to the Sea of Cortez.

The Colorado River met the sea Thursday for the first time in at least 16 years.

Nearly 30 years ago, Steve Nelson started kayaking the Colorado River Delta in search of adventure and a journey through history. He ended up …

ALONG THE RIO COLORADO, Baja California — When high levels of water gushed down the Colorado River last week for the first time in more than a…

ALONG THE RIO COLORADO — They came to see the river return, a half-century after U.S. dams kept it from flowing into Mexico.

This week’s big pulse of water into the long-parched Colorado River Delta will be one of the most studied water releases ever.

This canal supplies base flows to a Sonoran Institute restoration site in the Colorado River Delta in Mexico. Recent flows have helped nourish 1,100 acres of vegetation.

Martha Gomez-Sapiens stands next to a cottonwood that germinated after the pulse flow in spring 2014. Some 100,000 acres of vegetated delta existed a century ago.

Three-year-old willows germinated and grew since pulse flow; in Sonoran Institute restoration site in the Colorado River Delta in Mexico.