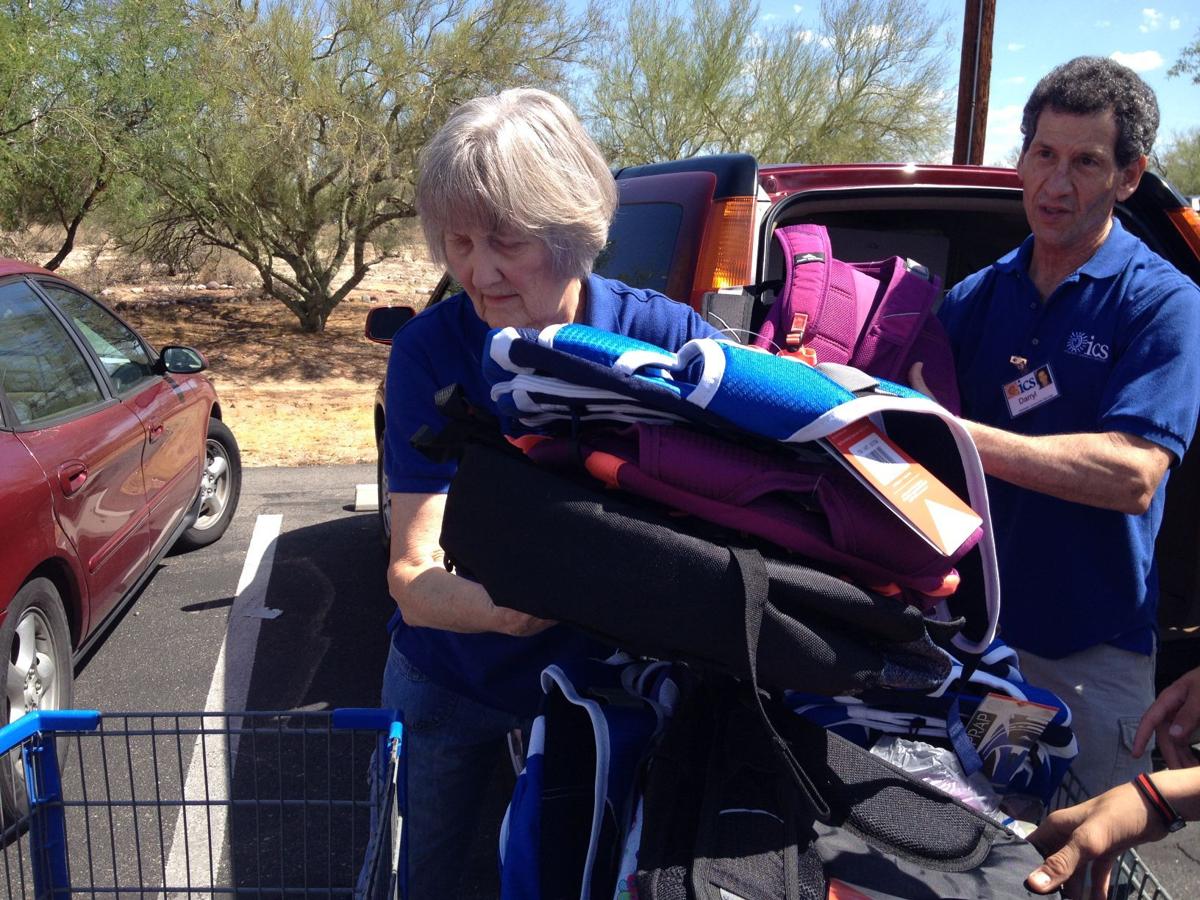 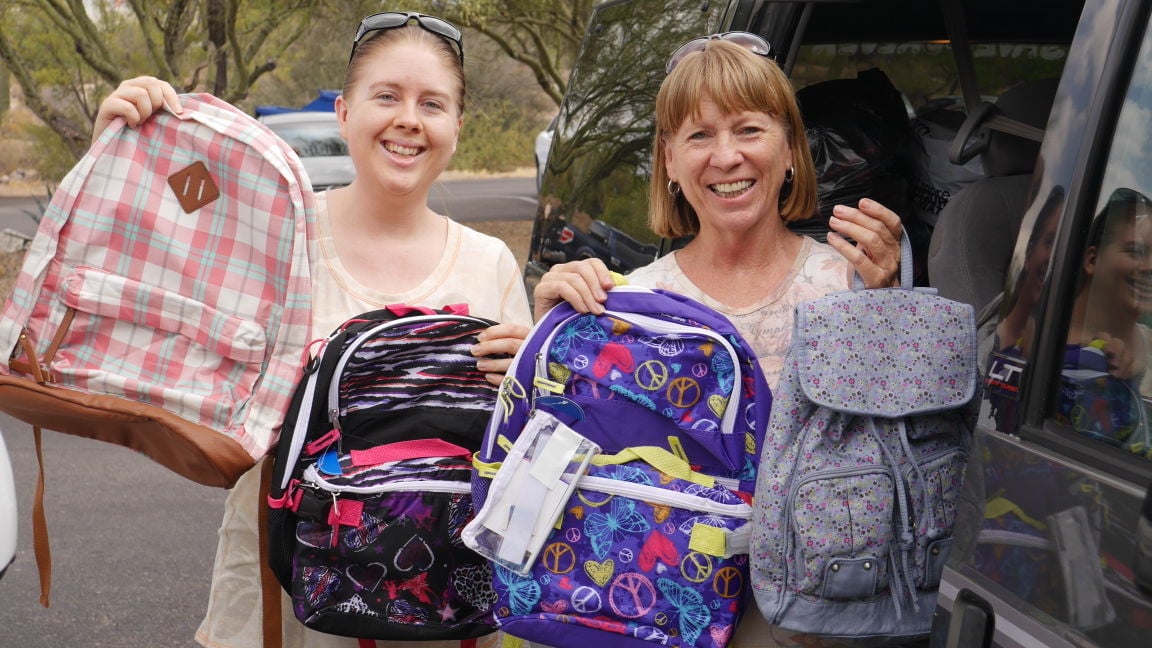 Wendy Camp, right, and daughter Nicole pose with backpacks they donated to Interfaith Community Services. The mother and daughter purchased 250 backpacks for the nonprofits collection.

Mother-daughter team Wendy and Nicole Camp don’t have money to spare, but they didn’t let that stop them when they found a cause they couldn’t pass up.

But after a year of stalking clearance sales and cashing coupons, they bought and donated 250 backpacks to Interfaith Community Services’ drive for school supplies, sometimes at pennies on the dollar.

They stuffed the packs into 30-gallon trash bags — 30 of them — and hauled the stash to the nonprofit’s northwest office, 2820 W. Ina Road, this summer as part of its Gifts of Love program.

“It was a complete surprise when they came in,” says Terri Patt-Smith, the organization’s social services director. “They said, ‘Oh, we have a few backpacks,’ and they just kept coming.”

When Wendy and Nicole donated 13 backpacks last year, Wendy, 61, was struck by the great need. The bags, full of school supplies, go primarily to children whose families rely on ICS’s food bank or financial assistance.

Wendy and Nicole, 29, decided to collect 40 backpacks for the 2015 back-to-school season. But as opportunities to snag cheap bags increased, so did their goal.

Nicole has a neurological condition with good days and bad days, so the mother and daughter cannot attend church frequently. Instead of giving money to a local church, they decided to allocate a “monthly tithe” toward backpacks.

“We would walk into a store, and I would say, ‘I have this much we can spend,’ ” Wendy says.

One day they walked into a Walmart with $25 in cash, expecting to find backpacks priced around $12.

“They had just marked the backpacks down to $2,” Wendy says. She looked at her daughter and said, “This must be a sign.”

Out came the plastic. They bought 48 backpacks.

“I’m a widow on Social Security, and my daughter lives with me,” Wendy says. “A big thing for me was stepping out on faith that God would take care of me.”

Over and again, they received timely coupons in the mail, walked into stores right after major markdowns and once haggled Walmart backpacks from around $5 to $3. All told, they estimate that they spent around $1,500.

“I don’t want to know how much gas I used,” Wendy says of their frequent trips to stores such as Walmart, Kohl’s, Ross Dress for Less and Sears.

Eight dollars was the most they spent on a bag; 69 cents was the least. Some of the backpacks originally sold for $60 to $80.

Nicole can’t wait to start shopping for the 2016 back-to-school season, but Wendy plans to pray about it first.

Last year, more than 450 children received backpacks, but others were turned away when ICS ran out. This year, with the Camps’ donation and major contributions from groups such as the retirement community Splendido at Rancho Vistoso and Congregation M’kor Hayim, the nonprofit has already collected about 450 bags.

This is the ninth year of the program, and ICS hopes to serve 500 to 600 children, though it still needs bags and school supplies to meet that goal.

“As we know with budget cuts and everything with schools, the burden is on the teachers to get supplies together,” Patt-Smith says. “They buy a lot themselves from their personal funds, but they do ask the families and give them wish lists.”

While not mandatory, these lists can include $50 to $100 worth of supplies per child, Patt-Smith says, not counting what a family might spend on new shoes or clothes.

The National Retail Federation’s 2014 survey on back-to-school expenses estimated that the average American household would spend $670 shopping for school. A preview of the 2015 survey says 29 percent of households with kids ages 6 to 17 plan to spend more than last year.

To send her 8-year-old twins April and Ariel Salazar to school each year, Maricarmen Salazar often faces a $100 tab just for classroom supplies. The family received backpacks in the ICS distribution last year and plan to do so again this summer.

Finances are tight for the family. Salazar, a permanent resident who moved to the United States from Mexico 15 years ago, is a single mother whose online tamale-making business, Maria’s Tamales, lulls in the summer. She is also a full-time student who is transferring from Pima Community College to the University of Arizona to further study clinical psychology. All three face medical issues, which further complicate expenses.

The donated backpacks are “a complete relief,” Salazar says. “We are constantly in medical appointments, so saving money is sometimes difficult, especially if you don’t have a lot of income. Having this backpack program is an excellent thing to happen for a family like ours.”

What: The Cellular Connection (TCC), a Verizon retailer, will distribute backpacks full of school supplies to 200 kids at three Tucson-area stores.

What: Donate school supplies or backpacks for ICS's Gifts of Love program. Although ICS will take school supplies through the beginning of the school year, please donate by Monday, July 20, for this upcoming distribution.

Distribution: 10 a.m. to 1 p.m. (or until supplies run out) Monday, July 27, at the ICS main office, 2820 W. Ina Road. Please call 731-3076 for distribution hours at the ICS east side office on Old Spanish Trail. Proof of school-aged children by immunization record or birth certificate required. Distribution is on a first come, first served basis.

Animals. Cosplay. Jewelry. All parts of her world at Silver Sea Jewelry.

From backpacks to potatoes.

Church simulcast invites women to pray for the nation

Women around the country will pray together.

The training is especially geared toward seeing signs in teens.

Talking about both the science of addiction and recovery.

Wendy Camp, right, and daughter Nicole pose with backpacks they donated to Interfaith Community Services. The mother and daughter purchased 250 backpacks for the nonprofits collection.