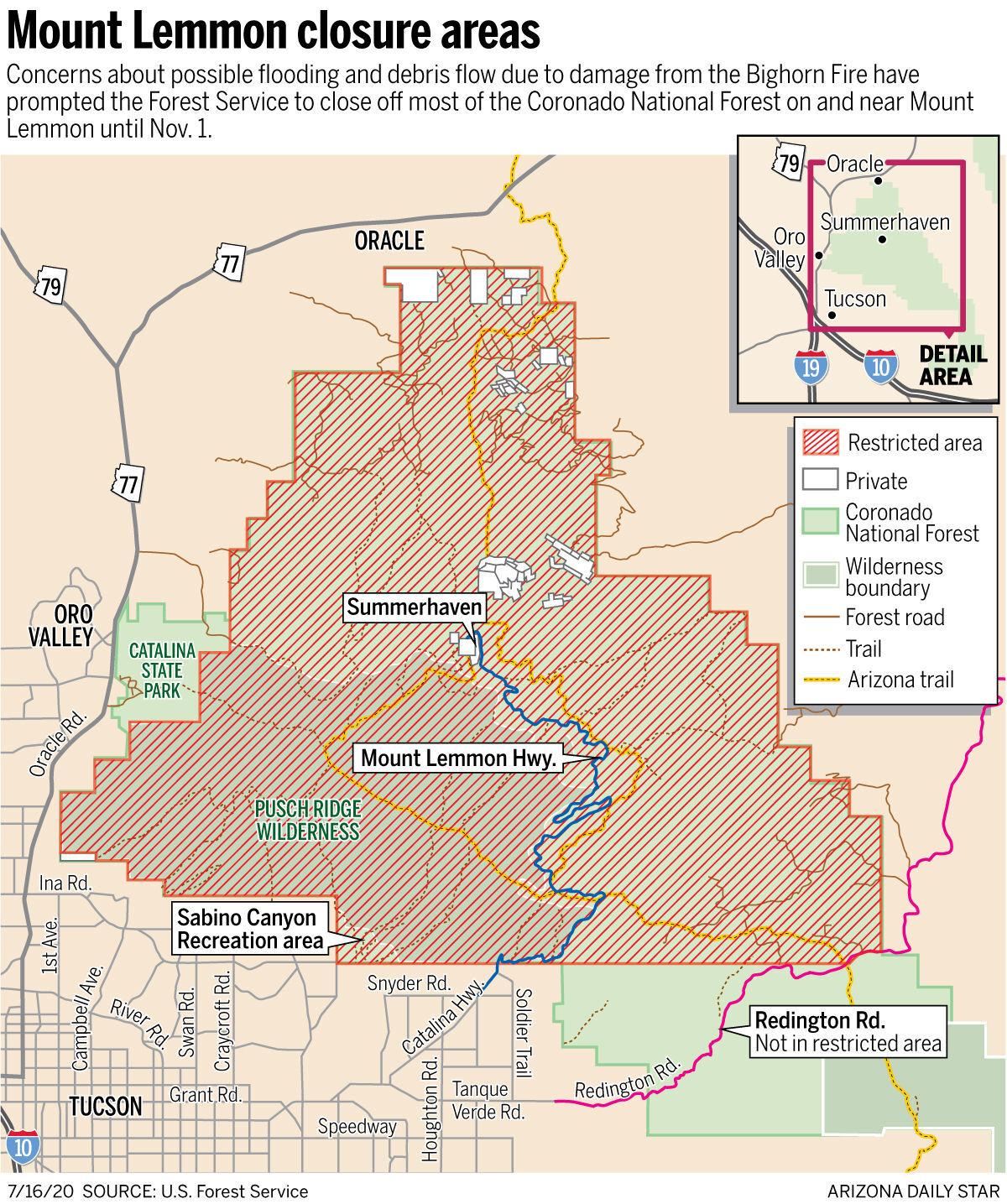 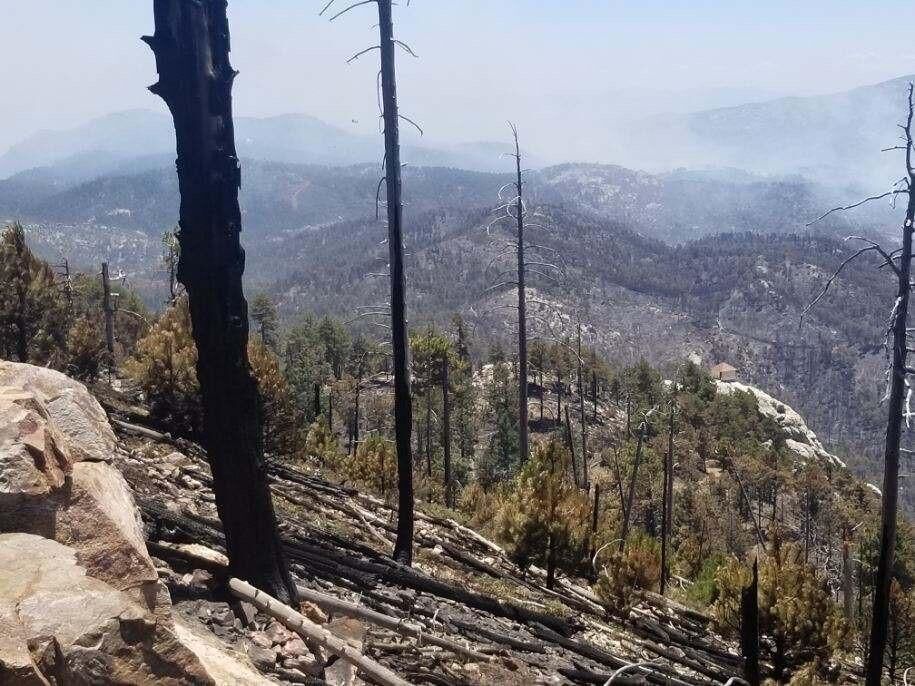 The forest closure affects lower-level trails in the Catalinas’ front range directly north of Tucson, which get more popular as cooler weather begins in October. 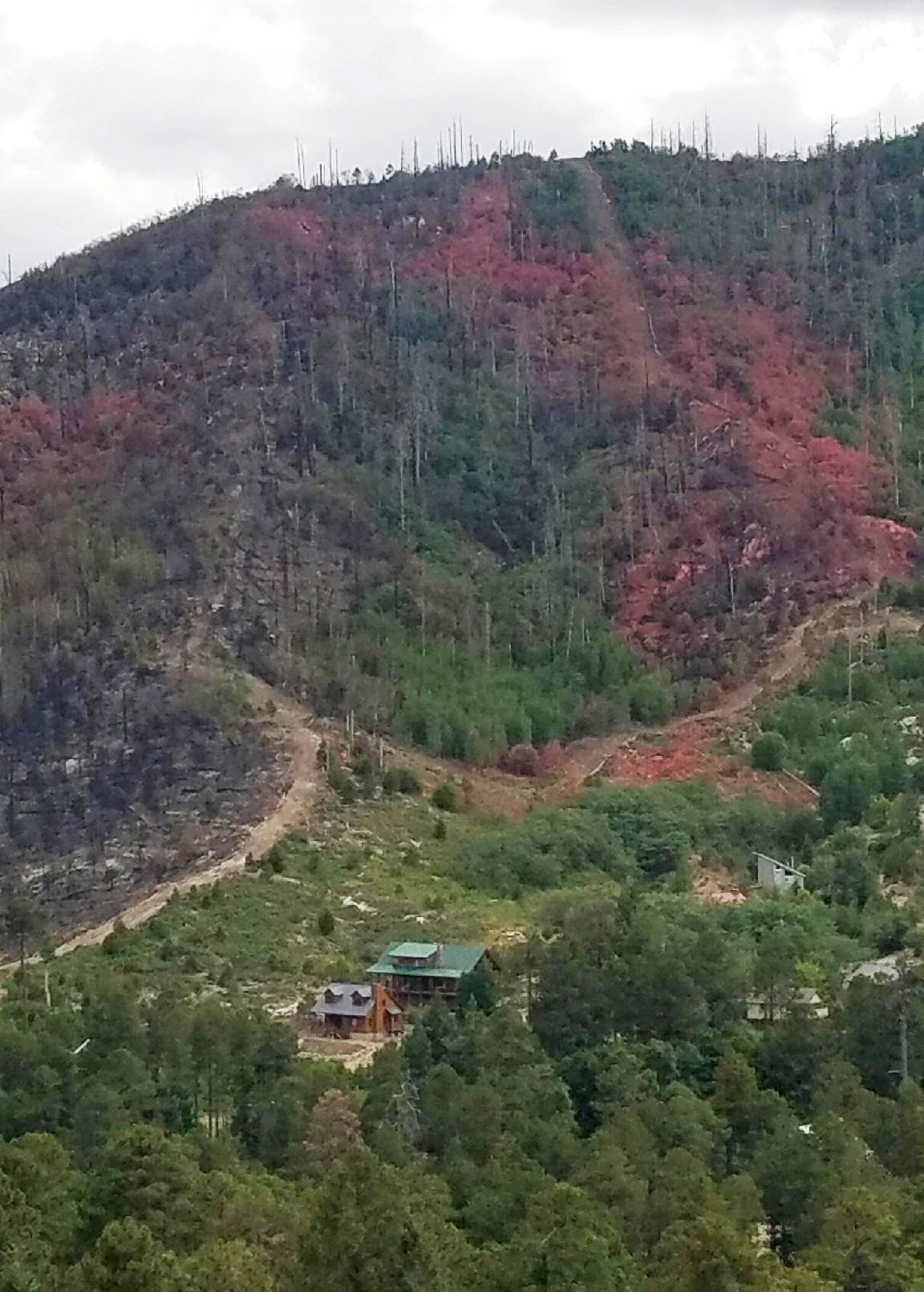 The public will be barred from visiting the Coronado National Forest on Mount Lemmon and in Sabino Canyon until Nov. 1 because of increased risks of flooding caused by runoff from burned areas.

“I don’t want to be on the news talking about somebody who dies because I allowed someone in the burn area,” said Coronado National Forest Supervisor Kerwin Dewberry. “We’ve seen some rain and some soot come across various roads already.”

The closure could be scaled back or ended earlier if it turns out the damage to roads and other property from runoff is not as bad as feared, Dewberry said.

Dewberry said his decision to close off the forest until November, announced late Tuesday, was based in large part on findings from an emergency response team that gauged potential after-effects of the 119,000-acre Bighorn Fire.

The federal Burned Area Emergency Response team concluded the amount of flooding and debris flow could be double what normally comes out of the forest during the summer monsoon season.

The emergency response team, using remote sensing imagery and other soil data, concluded that 32% of the 119,000 burned acres in the forest suffered moderately severe burns during the fire and 4% received highly severe burns. The remaining acres were either unburned or received burns that weren’t very severe.

“Excessive rainfall over the burn scar will result in debris flow moving” through the Bighorn Fire area, the weather service said. “The debris flow can consist of rock, mud, vegetation and other loose materials.”

Urban areas lying downstream from the mountains such as near Pima Wash along Oracle Road and Finger Rock Wash in the Catalina Foothills should prepare for post-fire flooding and debris flow, the Tucson Department of Transportation said late Wednesday.

Residents along Lower Sabino Creek northeast of Tucson could also be at risk, it said in a Facebook post.

“Any watershed or any watercourse” in the urban area whose source lies up in the burned area has the potential for flash flooding, said Lynn Orchard, a Pima County Regional Flood Control District Department hydrologist.

But Dewberry said he will closely watch the runoff impacts and be prepared to dial back the forest closure if conditions warrant that. The Forest Service has had at least parts of the Catalinas closed since June 7, two days after the Bighorn Fire was set off by lightning.

The forest closure cuts public access to some of the Tucson area’s most popular summertime hiking trails on Mount Lemmon, where people flock to escape the searing heat.

It also affects lower-level trails in the Catalinas’ front range directly north of Tucson, which get more popular as cooler weather begins in October.

Also closed is Sabino Canyon northeast of Tucson, which draws as many as 1 million visitors a year to see one of the area’s few year-round streams.

The closed area runs as far east as Redington Pass, where the Catalinas meet the Rincon Mountains, and as far west as Pusch Ridge in northern Pima County east of North Oracle Road.

Individual violators of the closures can be fined up to $5,000, while organizations caught in violation could be fined up to $10,000. Violators could also be imprisoned up to six months, the Forest Service’s official closure order says.

Catalina State Park has closed on its own since the fire started but state officials are now free to open it when they want to, the Forest Service said.

Summerhaven is also unaffected by the forest closure since its shops and other businesses sit on private land. But those businesses have been shuttered since the closures began in June because the Mount Lemmon Highway leading there has been closed to the general public at its base.

The highway isn’t likely to stay closed until November, “although we can’t be sure when it will open,” said James Allerton, a spokesman for the Pima County Sheriff’s Department, which controls its access.

“Right now, we are in a fire situation,” Allerton said. “It’s closed due to fire and hazardous conditions up there. We need to make sure the road itself is safe. We will be working with county transportation to see that any hazards can be mitigated, like guard rails and making sure no trees are hazards to the road.”

About 15 sections of guardrails along the Mount Lemmon Highway were burned between milepost 17 just above the turnoff to Rose Canyon Lake and Milepost 24 before the road enters Summerhaven, said Bob Lane, division manager for maintenance and operations in the county transportation department.

They have been barricaded off to prevent cars or people from going into them, and should be repaired or replaced in a few weeks.

One longtime Sabino Canyon hiker, Janet Marcotte, said she is sad to see the canyon closed to the public for that long. But she understands the reasons why.

“Mostly I want them to take care of the canyon and see if they can prevent terrible erosion we know happens after fires,” said Marcotte, who lives near the canyon and hikes it three times a week. “We are just going to have to give them the time to get that done.”

Jenni Zimmerman, an associate broker for Mount Lemmon Realty, said hers and Summerhaven’s six other businesses are hoping to get a highway reopening date from Pima County by Friday. While the road has been open to Summerhaven business owners and residents all summer, the businesses have been closed since the fire first forced evacuations in the Summerhaven area.

“Most of the businesses are going to need at least five days to get everything back in order and order the food they need to operate,” said Zimmerman, whose family has run businesses in Summerhaven for many decades.

She said she agrees with the forest closure for now but hopes the Forest Service will allow it to reopen sooner than November, “even if it’s just certain trails.” Her boyfriend, a fire captain for the Mount Lemmon Fire Department, has been in the forest and found some trails, such as the Butterfly Trail and those leading from Marshall Gulch, are badly burned and no one should go into them now, she said.

“There are a lot of areas up the mountain where there’s just backburned areas, that didn’t affect big trees and stuff,” and maybe could be reopened sooner, she said.

The Bighorn Fire may have damaged soils near Tucson-area homes, making them vulnerable to debris flows.

Invasive buffelgrass may have helped Bighorn Fire take out saguaros

The fire took out as many as 2,000 saguaros, some of which stood amidst stands of buffelgrass. The invasive, non-native grass can spread and intensify wildfires dramatically.

Across Pima County, 12,697 cases of coronavirus have now been confirmed, up 291 cases from the day before.

The University of Arizona is hosting a live briefing that will provide information about the campus reentry plan.

Pima County now says that 982 homes and businesses along washes are at risk of flooding from Bighorn Fire-induced monsoon runoff, up from 431 homes a week ago.

Change of plans: Highway to Mt. Lemmon to open Saturday, months ahead of schedule

The Pima County Sheriff's Department will monitor the amount of traffic going up the mountain and delays are expected.

The highway from Tucson to Summerhaven was reopened last week after a closure prompted by the massive Bighorn Fire. But the Coronado National Forest on Mount Lemmon remains closed to the general public.

Forest Service officials say they're not sure if all the Catalina Mountains' hiking trails can be cleared of hazardous debris by Nov. 1, when their forest closure order is scheduled to expire. The dangers were caused by the Bighorn Fire.

The forest closure affects lower-level trails in the Catalinas’ front range directly north of Tucson, which get more popular as cooler weather begins in October.