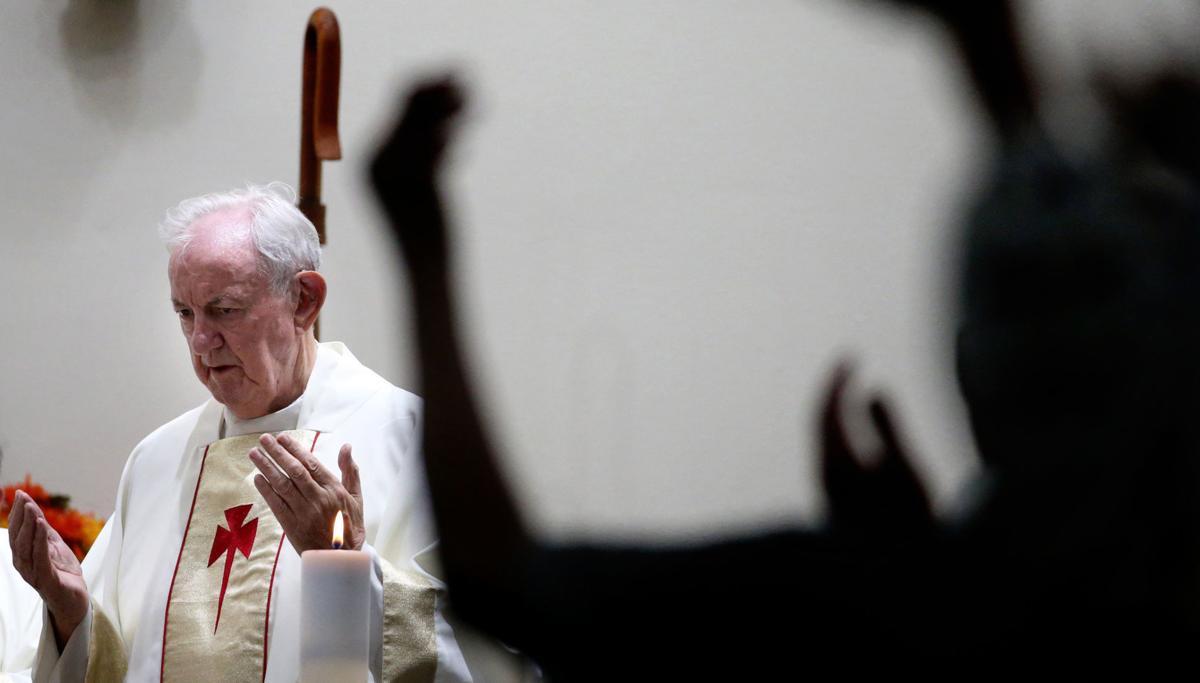 Monsignor Thomas Cahalane helps celebrate a Mass to mark his upcoming retirement at Our Mother of Sorrows Catholic Church, where he has served as pastor for 38 years. He has been a priest in the Roman Catholic Diocese of Tucson since 1963. 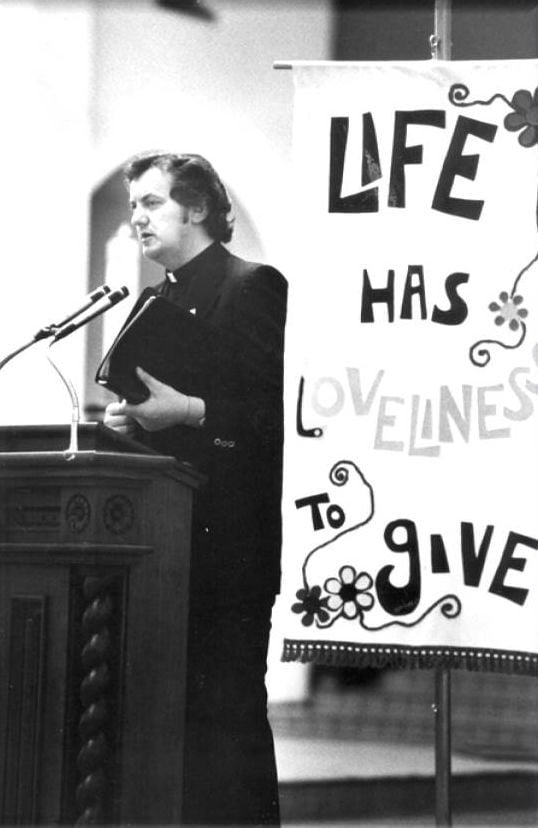 Cahalane says one of the highlights of his career was establishing a program to bring alienated Catholics back to the faith. 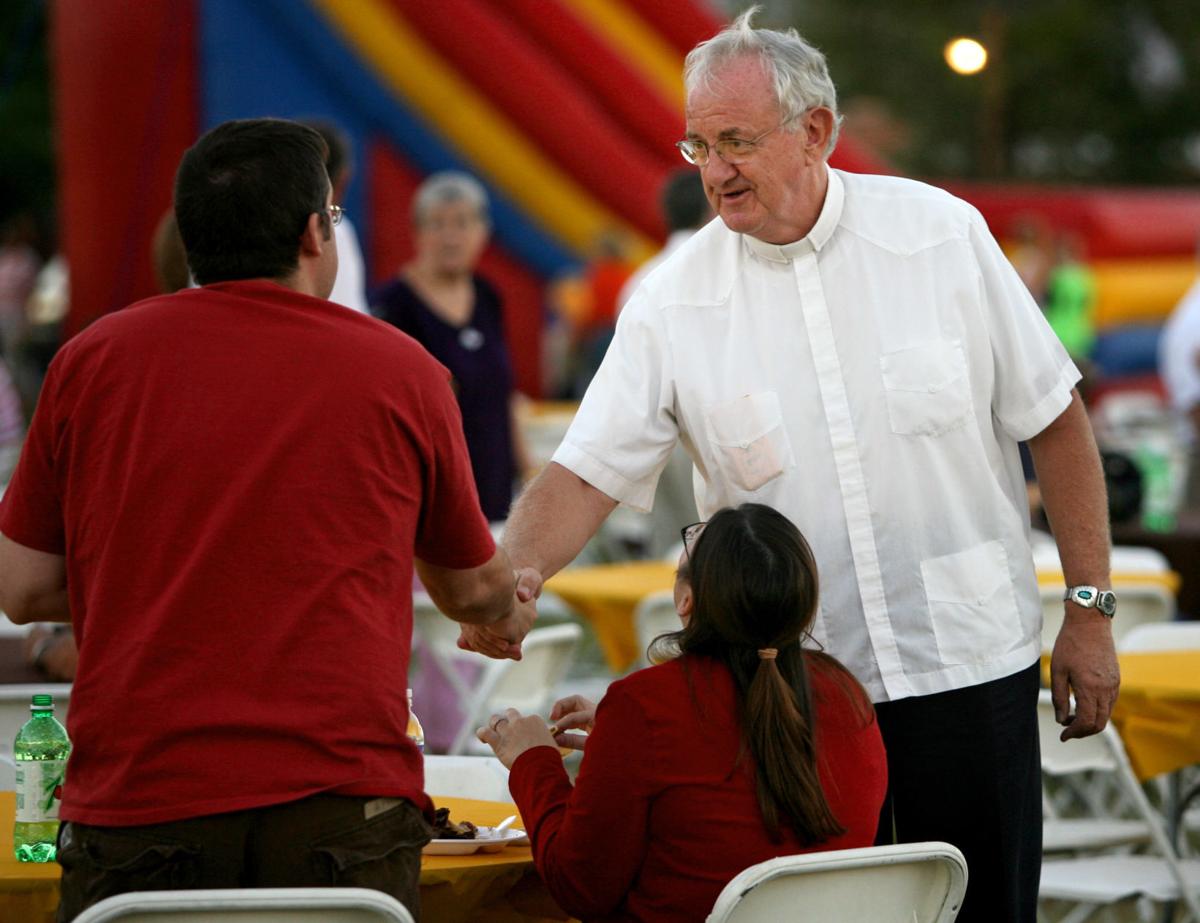 Cahalane, widely known as “Monsignor Tom,” greets guests during a parish fiesta at Our Mother Of Sorrows Catholic Church. He will remain at the church in retirement as a part-time priest. 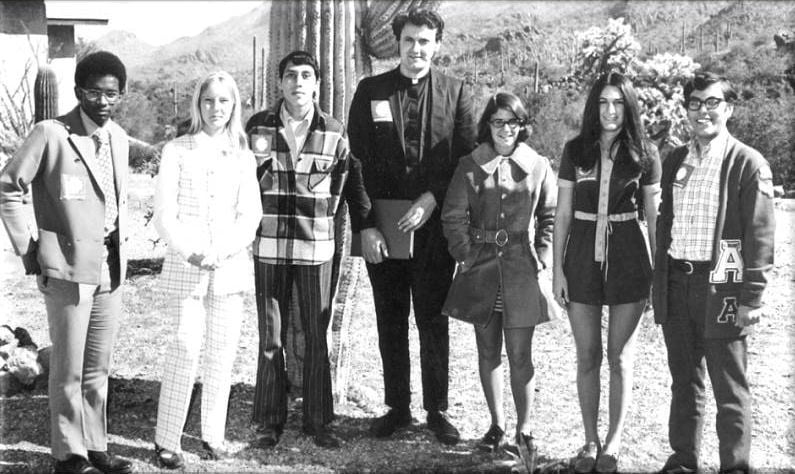 Monsignor Thomas Cahalane, center, spent some of his early years in the Diocese of Tucson as the director of the diocesan youth ministry. 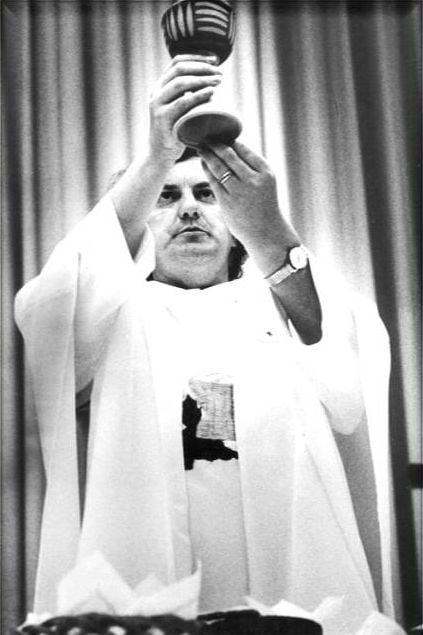 Regarding sex-abuse scandals, Cahalane says the Catholic Church “needs to embrace (victims) and ask for their forgiveness.” 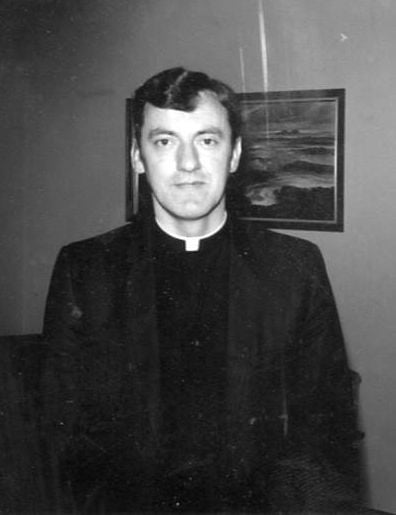 Cahalane arrived in Tucson from Ireland during “a time of great hope and promise.”

Monsignor Thomas Cahalane, a Roman Catholic priest who has been a friend and father figure to many in Southern Arizona, attracted some 4,000 parishioners and fellow priests to a three-day celebration earlier this month at Our Mother of Sorrows Catholic Church.

The festivities — including Irish step dancing and a champagne reception in the parish hall at 1800 S. Kolb Road — gathered many of those whom Cahalane impacted during his 56 years as a Roman Catholic Diocese of Tucson priest, serving 38 years as pastor at the east-side church.

On Sunday, June 30, Monsignor Tom — as he is widely known — will retire at the age of 80. He hopes to help out part time as pastor emeritus under the Rev. Arnold Aurillo, who begins as the church’s pastor July 1. There are 3,100 registered families in the parish.

On June 7, Cahalane, an Ireland native, concelebrated Mass with Bishop Edward J. Weisenburger and fellow parish priests under the theme “Giving Praise and Thanksgiving to the Lord!”

The church, which sits 900, was packed to standing room only and Cahalane began the homily by bringing laughter from those gathered.

“First of all, I want to thank you all for showing up to make sure that I’m retiring,” he said. “I thank Bishop Weisenburger for being here to make sure I do not change my mind.”

During the service, he was presented with a papal blessing certificate from friend Jean Fedigan, executive director of Sister Jose Women’s Center, which offers support to homeless women.

“We have always felt his presence. He will continue his work here in retirement. We are so pleased that he has been a part of our lives, and us a part of his. We are enriched,” Fedigan said in a later interview.

Cahalane reflected on his life, recalling that when he was ordained, Pope John XXIII had died a week earlier. Vatican Council II — a spiritual renewal for the church and an effort to bring it into the modern world — was at its midpoint and it was not known whether or not it would continue. John F. Kennedy was president.

“As I look back, it was a time of great hope and promise,” said Cahalane, thanking God for “my family of origin and my faith family. I have and I continue to encounter God’s amazing grace and presence in both.”

From Ireland to Tucson

Cahalane’s parents reared six children on a farm in County Cork, Ireland. “I can still hear the echo of my father’s voice across the years leading the evening family rosary,” Cahalane said, also recalling the prayers from his mother. “I feel this family prayer environment was the seedbed of my call to the priesthood.”

In high school, Cahalane received a letter from his cousin, a priest in the Tucson diocese, who suggested he think about also becoming a diocesan priest. Cahalane did and after his ordination on June 8, 1963, he arrived two months later in Tucson at age 24, remembering it was the day the Rev. Martin Luther King Jr. gave his “I Have a Dream” speech during a civil rights rally on the steps of the Lincoln Memorial.

He went to work as associate pastor at Our Lady of Perpetual Help Parish in Scottsdale, which was then part of the Tucson diocese. He served in the tri-community of San Manuel, Oracle and Mammoth; was associate pastor at St. Augustine Cathedral; and also was in charge of the diocesan youth ministry.

Cahalane received a master’s degree in education from the University of Arizona in 1975 and served as the diocesan vicar of education for eight years.

He served under four bishops, learning from each one.

He said Bishop Francis J. Green was “a father at the Second Vatican Council and he promoted changes that came out of that historic event in the life of the church.”

Bishop Gerald F. Kicanas “was very collegial and collaborative in his approach to ministerial leadership.”

And Weisenburger, the current bishop who was 2 years old when Cahalane was ordained, “brings strong administrative gifts to leading our diocese.”

He said among the high points in his career were:

Establishing the Alienated Catholics Anonymous program in the 1980s, a process for welcoming those feeling isolated or estranged back to the active practice of faith. The program gained national attention through articles by the late sociologist, author and syndicated columnist the Rev. Andrew M. Greeley.

Developing a collaborative shared ministry approach with parishioners “by reaching out to those in the margins,” including volunteering in social outreach programs such as the Sister Jose Women’s Center and the Casa Maria Soup Kitchen, which provides meals to those in need.

Among the low points, he said, were:

“The (sexual) abuse crisis has been a very painful, hurting and damaging experience in the community of the church. It has been a deep wound and the violation of a most sacred trust,” said Cahalane.

“Those who have been victimized have been the most trusting and vulnerable among us. The church needs to embrace them and ask for their forgiveness, and listen always to the story of their woundedness,” he said.

“If the ‘safe environment’ protocols that are now in place in our parishes were in place 30, 40, 50 years ago, we would forestall dealing with the disastrous consequences of the abuse crisis.”

The diocese’s scars include a $14 million settlement in 2002 with 10 men who described clergy abuse in the 1960s through 1980s and 22 lawsuits that drove the diocese to file for Chapter 11 bankruptcy protection in 2004 and create a $22 million settlement pool, according to Arizona Daily Star archives.

“During these 56 years of great blessings, despite some challenging years during the abuse crisis, I can honestly say that I have loved being a priest. Not that every day has been totally joyful. At various times I’ve been pained, grief-filled, disappointed, angry and embarrassed.

“But whenever I conducted a baptism, presided at Mass, celebrated Christ’s mercy in confession, witnessed a marriage, anointed the sick and prayed with the dying, buried the dead, received or welcomed someone home to the church, or preached, taught or wrote about the faith, I know I was in the right place; doing the right thing.”

He said as a parish priest he also learned through parishioners and others about ministering to and with people.

Mary Babicke, a mother to four sons, has been a member of the parish since she was young girl and attended school there. She said she will never forget when her father suffered a heart attack in 2009 and she called Cahalane in the “wee hours of that morning, and he came to the hospital right away.” Days later, he gave her father last rites before he died.

Babicke said when one of her sons decided to go to West Point, Cahalane held a special prayer service for her son’s protection. It brought the mother a “sense of calmness and peace.” This peace has extended to her family, she said, when undergoing “surgeries, fertility struggles, funerals and countless other times of pain and sorrow.”

Fedigan was an alienated Catholic who returned to the church 20 years ago through Cahalane’s program in which “he made us feel welcomed and engaged us in living our Catholic faith. He has been our champion and miracle person. He always has been very supportive.”

Cahalane works with Fedigan at the women’s center. He sits on the center’s board of directors and also serves as the chaplain.

In retirement, Cahalane plans to travel first to Ireland and visit his sister and brother on the family’s farm, which sits on green fertile land.

“I sleep in the room where I was born when I go home. The house is more than 100 years old.”

Photos: A look back at Msgr. Tom Cahalane's career

Msgr. Tom Cahalane, of the Roman Catholic Diocese of Tucson, will retire after 56 years of service.

Scoutmaster for east-side troop praised for 37 years of leadership

Former scouts traveled from across the country to attend his retirement celebration.

Monsignor Thomas Cahalane helps celebrate a Mass to mark his upcoming retirement at Our Mother of Sorrows Catholic Church, where he has served as pastor for 38 years. He has been a priest in the Roman Catholic Diocese of Tucson since 1963.

Cahalane says one of the highlights of his career was establishing a program to bring alienated Catholics back to the faith.

Cahalane, widely known as “Monsignor Tom,” greets guests during a parish fiesta at Our Mother Of Sorrows Catholic Church. He will remain at the church in retirement as a part-time priest.

Monsignor Thomas Cahalane, center, spent some of his early years in the Diocese of Tucson as the director of the diocesan youth ministry.

Regarding sex-abuse scandals, Cahalane says the Catholic Church “needs to embrace (victims) and ask for their forgiveness.”

Cahalane arrived in Tucson from Ireland during “a time of great hope and promise.”