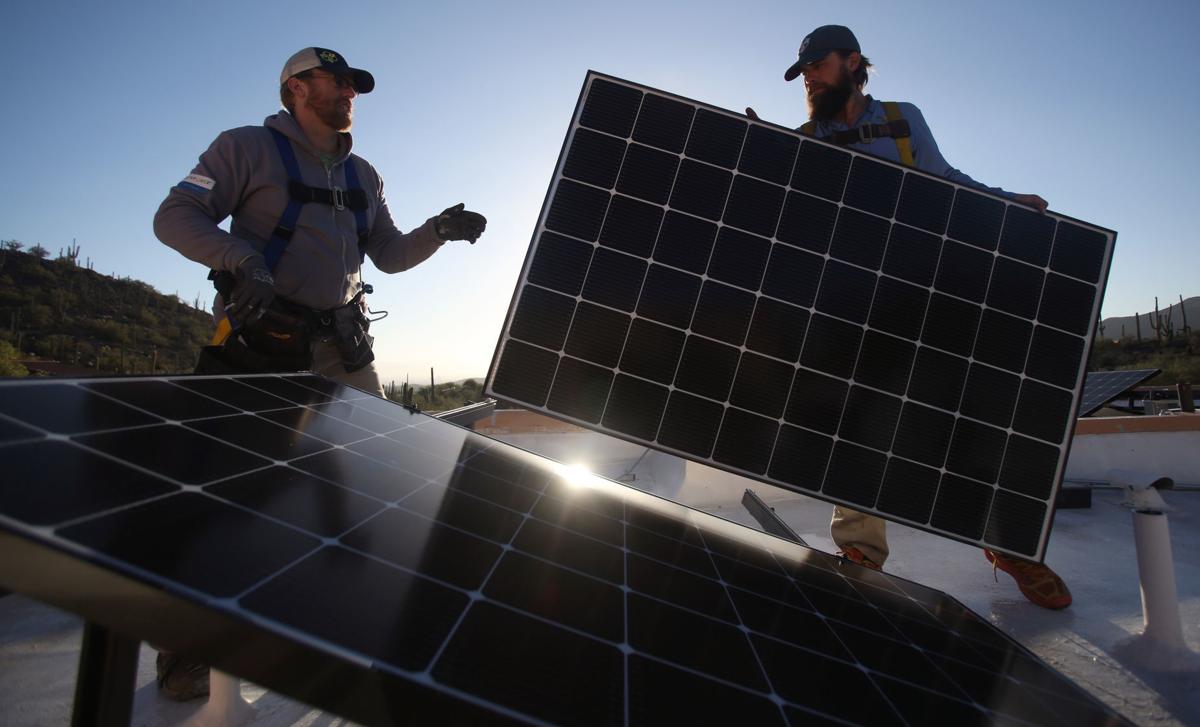 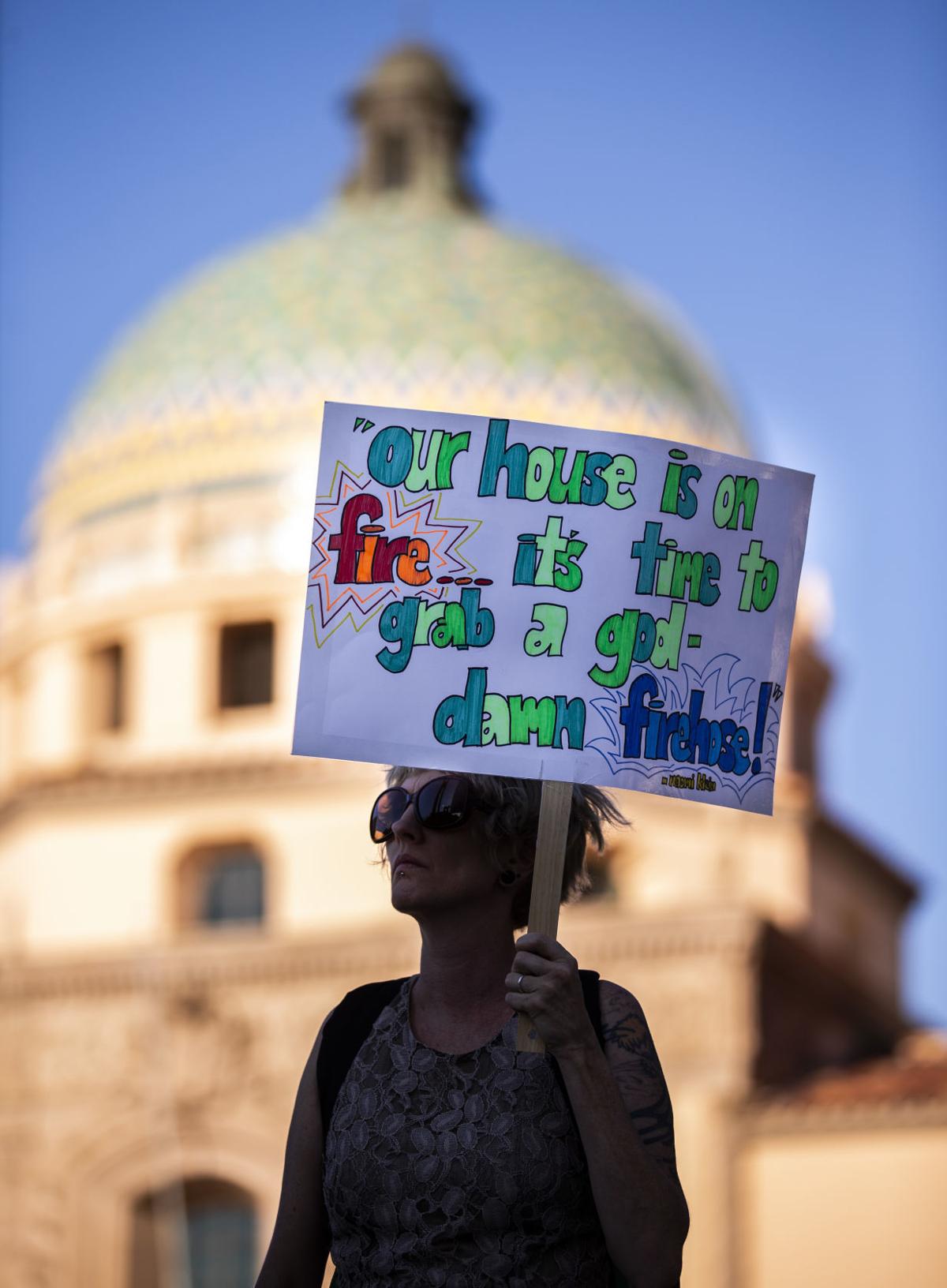 Jessica Ugstad attended a climate strike at El Presidio Park in Tucson on Sept. 20, 2019. The rally was one of many climate strike protests around the world attempting to raise awareness of a climate emergency. 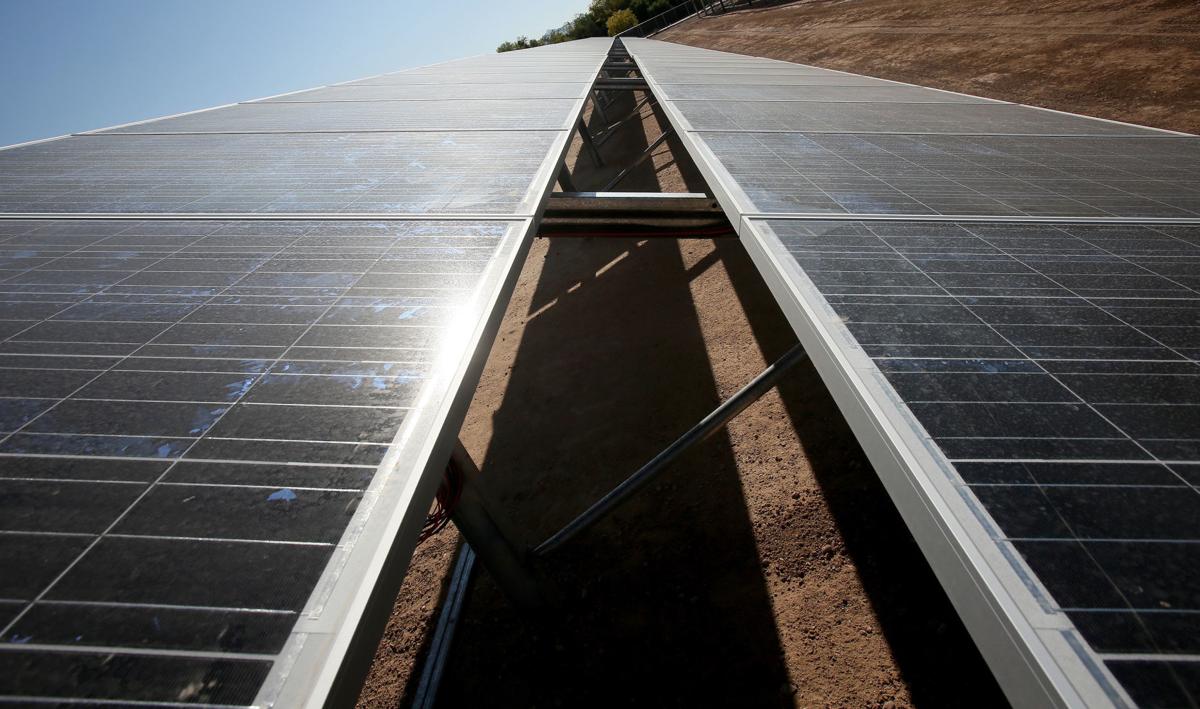 Solar panels tilt toward the sun at Solar Zone, a 225-acre research area created through a partnership of the University of Arizona and TEP.

Arizona is “ground zero” for the impacts of climate change and for fashioning fixes for the problem, say national environmentalists who met in Tucson last week to map strategies.

For two days, representatives of 16 Arizona and national environmental groups held private, closed-door sessions at a Catalina Foothills-area resort to set priorities for next year’s round of environmental struggles and to figure out how to best fight them. For the groups, it was the most recent in an ongoing series of quarterly meetings held around the country on these subjects.

In an extended interview with the Arizona Daily Star away from those sessions, three environmental leaders, including one from Tucson, hammered home their view that taking on climate change, particularly trying to transform our energy sector, is their top priority, nationally and locally.

The leaders were Laura Dent, executive director of Chispa AZ; Fred Krupp, president of the Environmental Defense Fund; and Michael Brune, national executive director of the Sierra Club. Participants in the meeting at the Hacienda del Sol resort would not identify who the other groups involved were.

In Arizona, the three environmentalists interviewed said they would focus on lobbying utilities, the Arizona Corporation Commission and state legislators to move faster to increase clean energy’s share of the state’s electric load.

“We’re at the nexus of the climate crisis in Arizona,” said Dent, whose group focuses on environmental issues affecting low-income communities and people of color.

She cited research conducted by the group Climate Central this year that found Tucson and Phoenix had the third and fourth fastest-rising temperatures in the U.S., respectively, from 1970 through 2018.

Also, “we’re at a political crossroads,” Dent said. “One third of our state is Latino, and we want to see more action on climate change that disproportionately affects Latinos and other, underrepresented communities. Arizona is going to be majority people of color by around 2030, and there are a lot of lessons that can be taken from here nationally.”

Arizona has an opportunity to take on extreme weather in general and extreme heat in particular, “to transition from dirty fuels to clean energy,” said the Sierra Club’s Brune.

“We’re looking for leadership throughout the state as we’ve seen through the U.S., where since 2010, 299 coal plants have been closed or on a schedule to be retired” by 2030, he said.

In response, Tucson Electric Power spokesman Joe Salkowski and Corporation Commission Chairman Bob Burns said their organizations are ready to move faster to transition to renewable energy, although their strategies for doing that aren’t yet mapped out.

TEP is on target, with already approved, yet unbuilt projects, to increase its share of renewable energy from 13% today to 28% by 2021, which is close to the utility’s previously set goal of 30% renewables by 2030, Salkowski said.

TEP also plans to release a detailed, long-term blueprint in April 2020 for further increasing its share of “clean” sources such as solar and wind, Salkowski said. It will be filed with the Corporation Commission as part of its latest overall resource plan, he said.

Currently, the utility is working with the University of Arizona’s Institute of the Environment to develop, as part of that blueprint, a long-range carbon emission reduction goal that would be “informed” by the goals of holding down global temperatures to levels set by the 2015 Paris climate agreement, Salkowski said.

Utility officials also have been regularly meeting to discuss this plan with environmental groups, advocates for low-income and elderly people, Davis-Monthan Air Force Base officials and the state’s Residential Utility Consumer Office.

“We wanted to transition away from simply counting kilowatts to targeting our reduction in carbon emissions, which is the target we ought to be aiming at,” Salkowski said.

As for the commission, chairman Burns said there’s a reasonable chance that the five-member body can increase its current standard for all electric utilities to have at least 15% renewable energy by 2025.

So far, that hasn’t happened. Despite talks among commissioners and their staff, the members haven’t been able to agree on a new, fixed percentage.

Currently, the state’s utilities are at 9% renewables and will increase to 10% next year.

That puts them in accord with the legal timetable the commission has set to reach the 2025 standard of 15%, a commission spokeswoman said.

Burns also plans to push for setting up a program of incentives to encourage owners of home rooftop solar systems to add battery storage technology, as a way of storing excess energy provided by the sun during the day to be used during nighttime when sun power is unavailable.

For environmentalists Krupp, Dent and Brune, these measures aren’t anywhere near ambitious enough.

They note, for instance, that only 5%, at most, of all of Arizona’s electricity is generated by the sun, according to U.S. government statistics.

That’s even though this state is perennially one of the sunniest in the nation. (Nationally, only 1.5% of all electricity generated is solar-powered, federal statistics show.)

As an example for Arizona and its utilities to follow, environmentalist Krupp pointed to a commitment made a year ago by Xcel Energy, a Midwestern and Western utility serving eight states, to reduce its carbon emissions 80% by 2030 and to 0% by 2050.

The utility serves electricity to customers in the Minnesota and Denver areas. Its zero-emissions goal is the most sweeping announced by any U.S. utility.

Salkowski said TEP today can’t say now precisely what its long-term goal for carbon emissions will be. But the utility is following the same planning process that Xcel used in shaping its goals for 2030 and 2050, including working with outside climate experts to establish a “science based carbon reduction target,” he said.

Also, TEP, unlike Xcel, doesn’t have any nuclear power resources it can turn to to replace coal and other fossil fuels, Salkowski said.

“That said, we plan to establish an ambitious, achievable goal of our own that will maximize carbon emission reductions while maintaining affordable and reliable service,” he said.

The Sierra Club’s Brune said its group’s recent study of Arizona coal plants shows it’s economically feasible for this and other states to proceed much farther and much faster toward retiring “dirty” coal-burning plants than what’s currently projected by utilities and the Corporation Commission.

Published in September, the study said that retiring all six remaining coal-fired power plants used by Arizona utilities could save the state’s ratepayers $3.5 billion in capital and operating costs. That’s if they were replaced by photovoltaic solar facilities coupled with battery storage, wind energy and other energy sources purchased on the open market, said the study, written by consultant Strategen Consulting, LLC, of Berkeley, California.

“The transition away from coal increasingly makes economic sense due to reductions in the cost and the technology advancement of renewable energy and energy storage,” the study said.

“Arizona ratepayers stand to save money on their electricity bills by the retirement of coal-burning units and their replacement with renewable resource.”

For one, its renewable cost figures assume the use of federal tax credits for renewable energy, credits that are now slowly being reduced and will be phased out over time, he said. Second, the study significantly lowballs the cost of developing the solar-battery storage systems at the scale needed to replace all coal-fired energy, he said.

The study’s cost figures were based on a single contract for a 20 megawatt energy system, when utilities would have to find replacements for 5,500 megawatts of retired coal energy, Salkowski said.

The study also incorrectly assumed that if all the coal plants were retired, utilities will be able to buy some power on the wholesale open market at the same prices they’re paying today, “even after we remove thousands of megawatts of coal-fired generating resources from the grid,” he said.

“That doesn’t make sense. If you remove the supply, the cost is going to increase,” Salkowski said.

Ed Burgess, an author of the study, disagreed with Salkowski’s criticisms. First, he said that while the tax credits will be slowly whittled down, federal tax guidelines will allow solar developers to keep claiming the current tax credits for four years if they purchase equipment or buy a site this year.

Second, “the impacts to wholesale prices in the future based on these dynamics (after closing coal plants) is somewhat unknown,” said Burgess, who has master’s degrees in sustainability and solar energy engineering and commercialization. “No crystal ball will tell us what wholesale prices will be.”

Third, he defended the use of the 20 megawatt solar plant as a model for what it would cost to install “solar plus” facilities on a larger scale. Typically, “you get economies of scale with larger projects that lower costs,” he said.

“Even 20 megawatts is not really a smaller scale,” Burgess said. “That was from a project we saw in Arizona and we thought it was a good point of comparison.”

The three Lower Basin states need to cut their water use by 18 percent from their average from 2000 to 2018 to bring the river's reservoirs into proper balance, conservationist and author Brian Richter says.

Jessica Ugstad attended a climate strike at El Presidio Park in Tucson on Sept. 20, 2019. The rally was one of many climate strike protests around the world attempting to raise awareness of a climate emergency.

Solar panels tilt toward the sun at Solar Zone, a 225-acre research area created through a partnership of the University of Arizona and TEP.