PATAGONIA — Sonoita Creek near here cuts a swath from a few inches to a few feet wide through a blanket of watercress-like plants. It’s lined by some of the tallest, oldest cottonwoods in the U.S., accompanied by a densely packed jungle of willows.

Running through the Nature Conservancy’s 53-year-old Patagonia-Sonoita Creek Preserve, the creek is an internationally known bird attraction. It draws 275 species including the threatened yellow-billed cuckoo, the ubiquitous vermillion flycatcher, 14 hummingbird varieties and an increasing number of rare Mexican migrants such as the Sinaloa wren and the plain-capped starthroat.

Fenced off from cattle since the 1960s, the preserve also draws three native fish species and contains a recently discovered population of endangered Huachuca water umbel.

The birds are drawn by what the conservancy says is some of Southern Arizona’s richest remaining riparian streamside habitat. The preserve’s two miles of perennial stream are accompanied by a healthy population of marshy cienegas, considered the rarest habitat in increasingly arid Arizona.

But its 873 acres are now another battleground in the conflict over the planned Rosemont Mine.

The Nature Conservancy, which has built a long record of working with businesses to promote conservation, is now at odds with Rosemont proponent Hudbay Minerals Inc. over its plan to restore and rehabilitate a second stretch of creek lying a few miles upstream.

Hudbay’s plan involves moving the creek a few hundred feet away from a state highway. It would replace what’s now a straightened, concrete-armored channel with a stream resembling one created by nature.

Lying on Hudbay’s 1,580-acre Sonoita Creek Ranch, the stream restoration is aimed at compensating for the mine’s filling in of 18 miles of washes in the Santa Rita Mountains.

The Toronto-based company bills this effort as a showcase for how to restore arid land waterways.

But the conservancy is concerned it could shred its stretch of Sonoita Creek by drowning its limited water supply in a flood of sediment. It conveyed these warnings in a highly pointed letter last year to the U.S. Army Corps of Engineers.

Much more environmental analysis was needed before the Corps approved a Clean Water Act permit for the open-pit copper mine, said a second letter, written last December by conservancy attorney Melinda Ching.

Similar concerns were raised in letters to the Corps by Tucson Audubon Society, Native Seed Search and Borderlands Restoration, which also own, manage and/or work to restore land in that area.

“The conservancy appreciates the need to protect Sonoita Creek Ranch from future development, both to maintain riparian and aquatic functions in the creek and to maintain wildlife connectivity between adjacent mountains,” wrote Daniel Stellar, the conservancy’s deputy state director, to the Corps in July 2018.

“However, fundamentally, the proposed mitigation plan does not benefit the conservation values in Sonoita Creek watershed, many of which the Conservancy, and partners, have been stewarding for more than 50 years.”

The mining company convinced the Corps that the conservancy was off base. The Corps issued the Clean Water Act permit last month for construction of the $1.9 billion Rosemont project in the Santa Rita Mountains.

In one of two letters Hudbay wrote to the Corps in the past year responding to the conservancy, the company laid down a highly detailed series of analyses to back its plan.

Its reviews, many of which were based on computer model studies, generally concluded that its newly created stream banks will release less sediment into the waterway than the existing unnatural stream, not more as the conservancy fears.

The Star obtained three of of the four letters exchanged by the two parties from the Corps through the federal Freedom of Information Act, and one directly from the conservancy.

“The proposed channels are wider, will have more available space for sediment storage, and are better able to adjust to changes in hydraulics and sediment transport regimes than the existing ... reaches of Sonoita Creek, that simply pass both fine and coarse sediment directly through the system,” Hudbay wrote the Corps last August.

Value of the creek

Kathryn Schrag, a 15-year resident of neighboring Patagonia, said she walks the preserve’s trails every week or two.

Seeing the flowing water “is restorative to my soul,” she said last week as she and a friend walked the creek trail a few hundred feet from the streambed.

Schrag wasn’t familiar with the technical issues dividing the conservancy and Hudbay, but she said it would be tragic if the mitigation work causes the perennial water through the preserve to disappear.

“The economy of the town relies significantly on tourism,” Schrag said. “People are coming to see running water and the birds.”

Of four stretches of Sonoita Creek studied over the past four years by local volunteers, the creek through the preserve was in the best shape of any, says the group Friends of Sonoita Creek.

The survey work was done by volunteers from 2014 to 2018 under the direction of retired University of New Mexico professor Peter Stacey, a specialist in riparian health and restoration.

The preserve section has the best soil integrity, the highest quality streambed structure and the best scores for riparian vegetation and wildlife habitat, says a summary of the Friends’ analysis.

The main flaw identified in that stretch was that the stream was still highly entrenched due to past cattle grazing that causes the channel to cut downward. That keeps floodwaters from spreading out onto and nourishing surrounding soil the way they used to.

The Nature Conservancy shares the view of the Environmental Protection Agency about Hudbay’s mitigation plan, the conservancy’s Stellar wrote in his letter.

In a November 2017, EPA concluded that excavating a new, unnaturally curvy channel in that area “would likely result in channel erosion, channel straightening and sediment delivery to downstream locations.”

“A large increase in fine sediment delivery, due to the size of the proposed mitigation project upstream, has the potential to result in unprecedented volumes of deposition, potentially filling the active stream channel and reducing the presence of surface water, as well as eliminating aquatic habitat required for native fish,” Stellar wrote.

The deposit of silt and other sediments on the preserve could also bury its two, recently discovered water umbel populations, he added.

Today, the existing creek is armored with concrete, car bodies and rock-filled wire baskets known as gabions to prevent the streambanks from eroding, washing away and threatening neighboring Arizona 82 with flooding.

But the mining company says the new streambanks will be less likely to send sediment into the creek. With natural curves restored, the water flow is changed, and the settlement is more likely to settle into the ground farther upstream, the company says.

Hudbay’s analyses found that the proposed new channel will fall “well within the observed range” of the existing channel when it comes to sinuosity and curviness.

As for the endangered umbel populations, Hudbay told the Corps it is already required by an earlier federal biological opinion to plant and create habitat for the species around the ponds at Sonoita Creek Ranch.

“This should extend rather than contract the range of the species,” Kathy Arnold, environment director for Hudbay’s Arizona unit, wrote in her August 2018 letter to the Corps.

They are exploring “all options available to us,” including litigation, they said in a statement to the Star.

“Accelerated transport of sediments would negatively affect our Sonoita Creek and the preserve, including habitat for rare, threatened, and endangered species,” said Nicole Hill, the conservancy’s Arizona lands program director.

“Losing the unique habitats would be a significant loss to conservation and the state of Arizona.”

“The economy of the town relies
significantly on tourism. People are
coming to see running water and the birds.” Kathryn Schrag, a 15-year resident of Patagonia 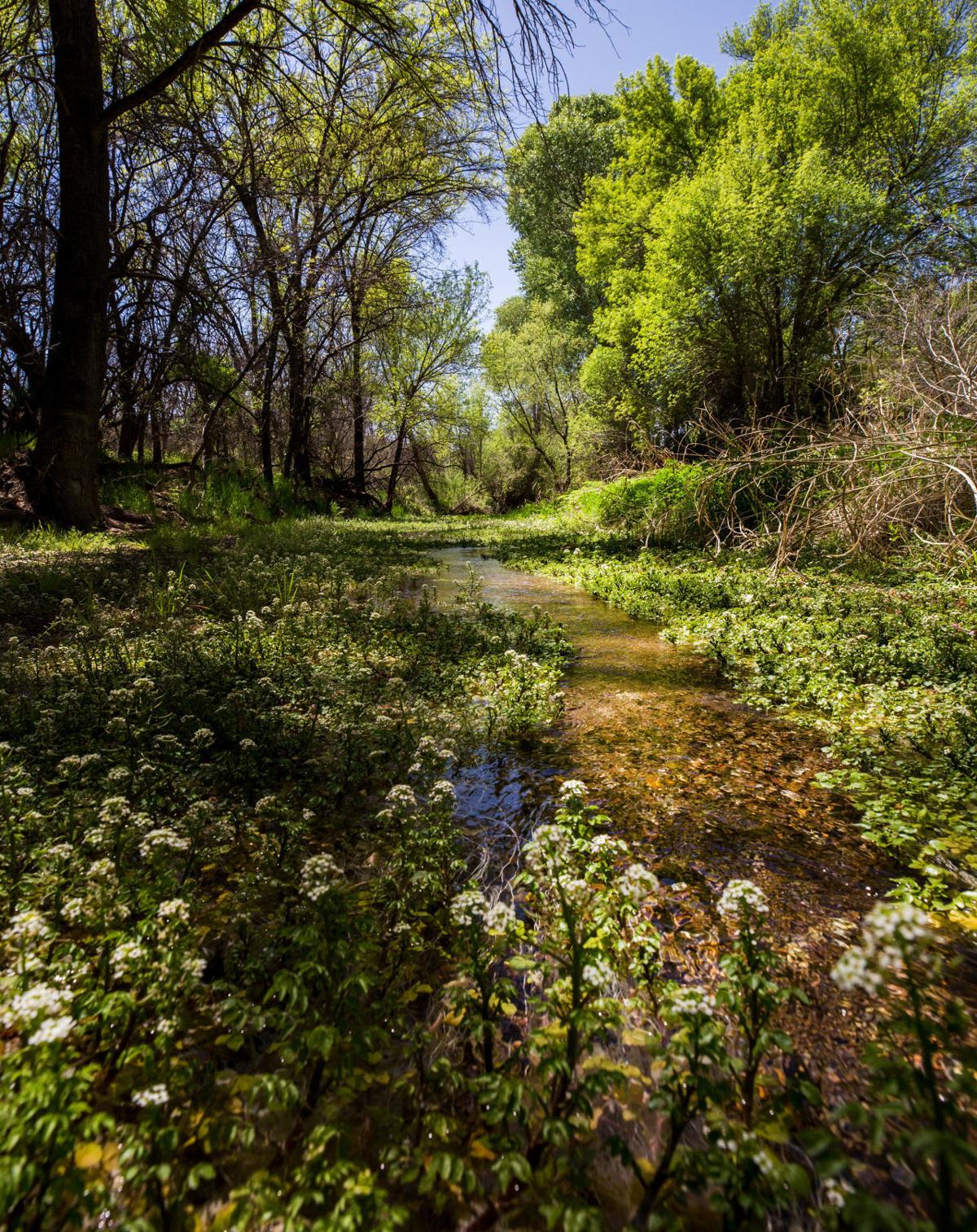 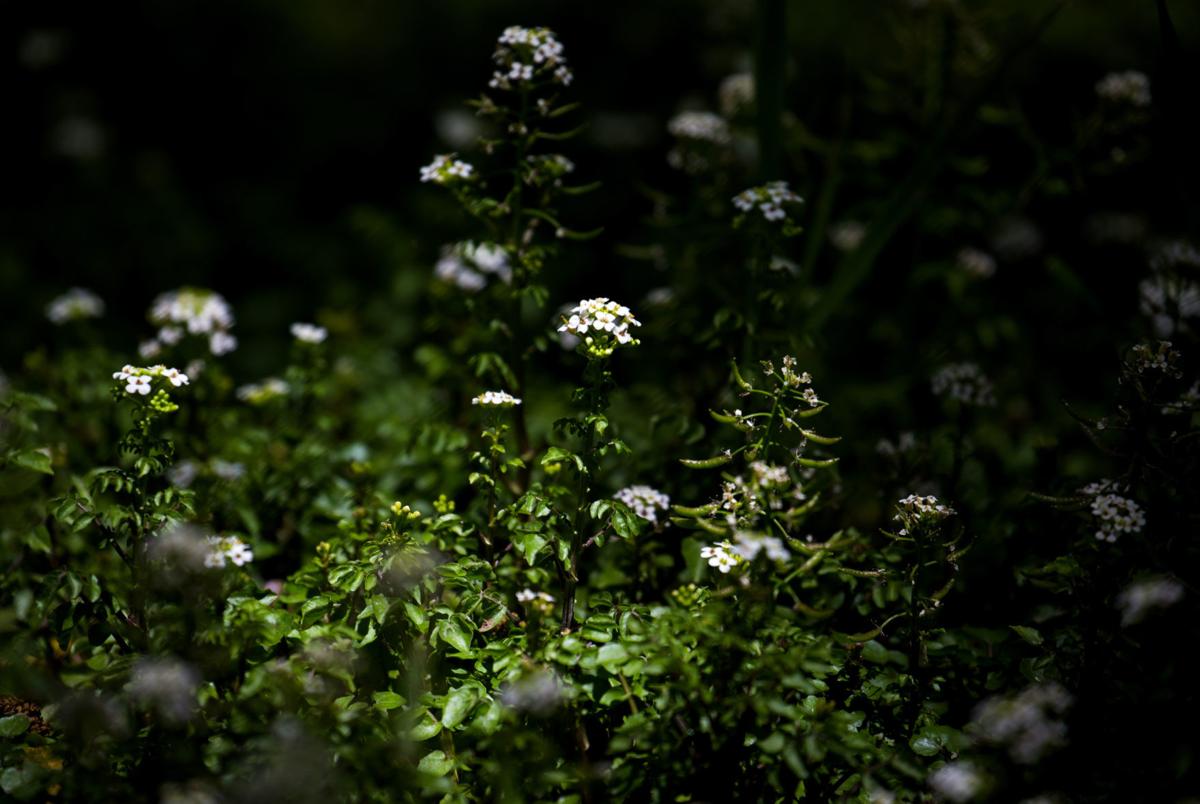 Blossoming plants line the side of Sonoita Creek in the Nature Conservancy’s Patagonia-Sonoita Creek Preserve. 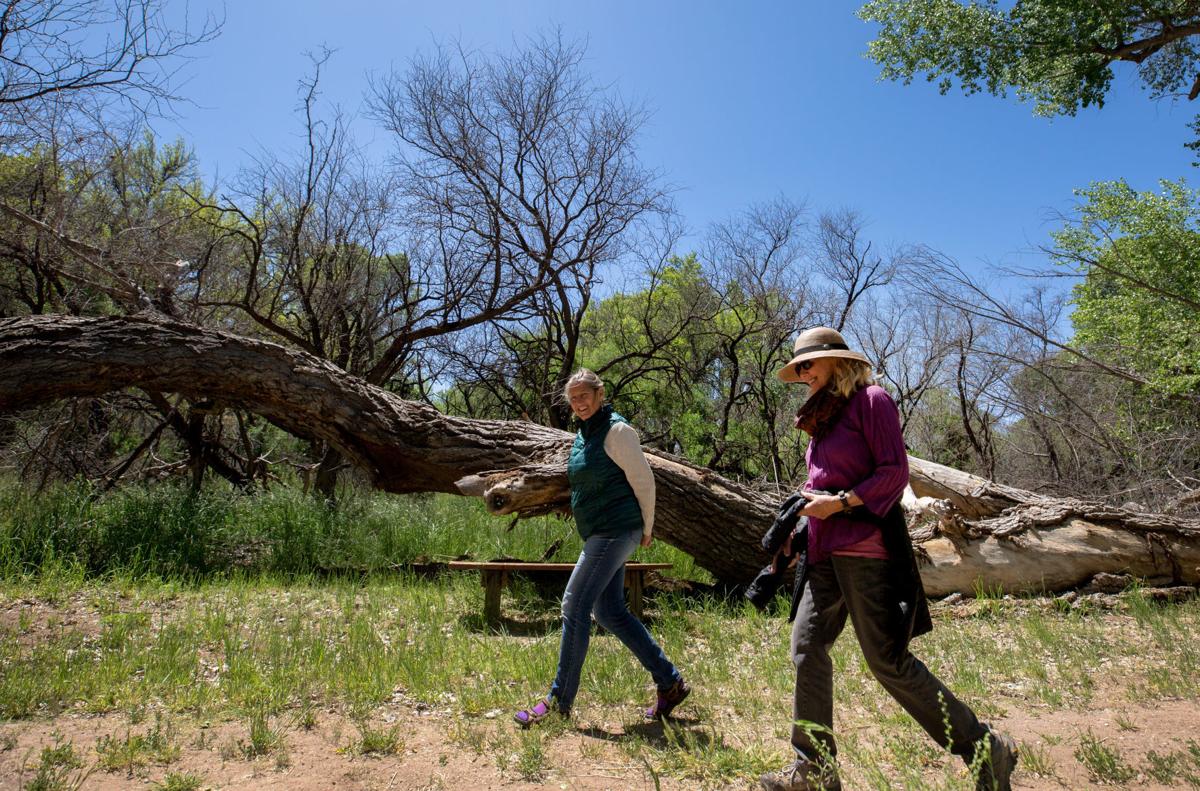 Kathryn Schrag, left, of Patagonia and her friend Annie Wilkinson of Cascabel take a walk along the Creek Trail in the 873-acre preserve. 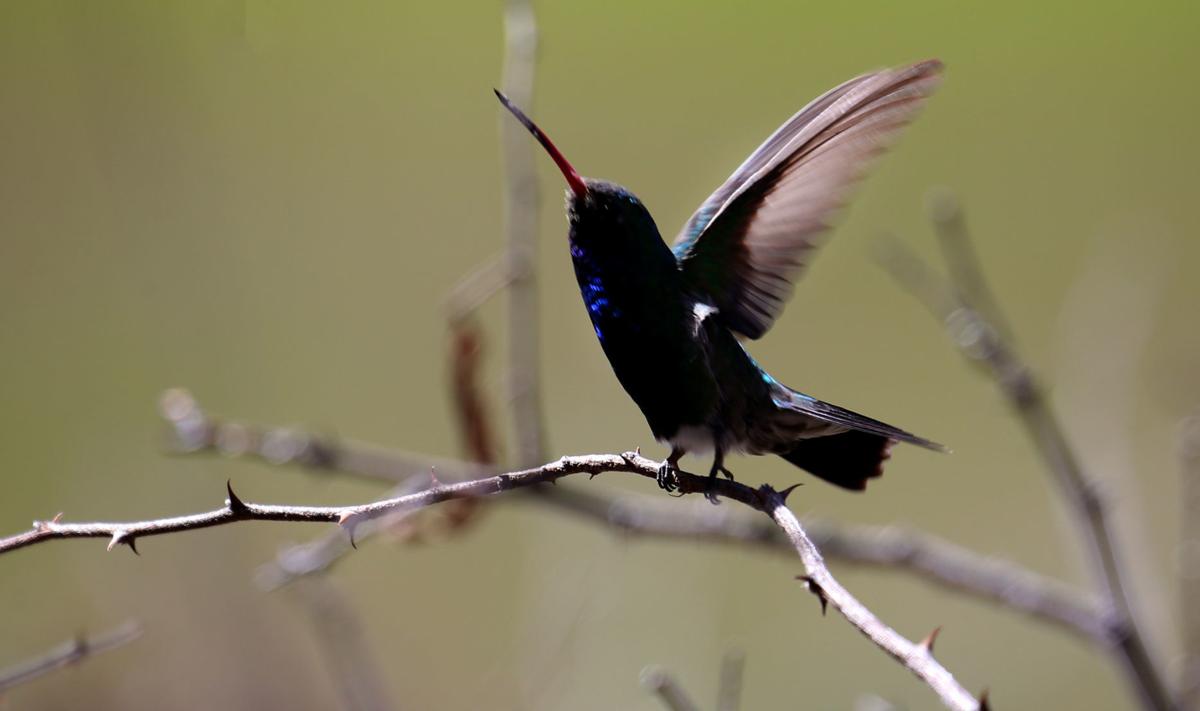 A hummingbird perches near the visitor center at The Nature Conservancy's Patagonia-Sonoita Creek Preserve, April 10, 2019, in Patagonia, Ariz. 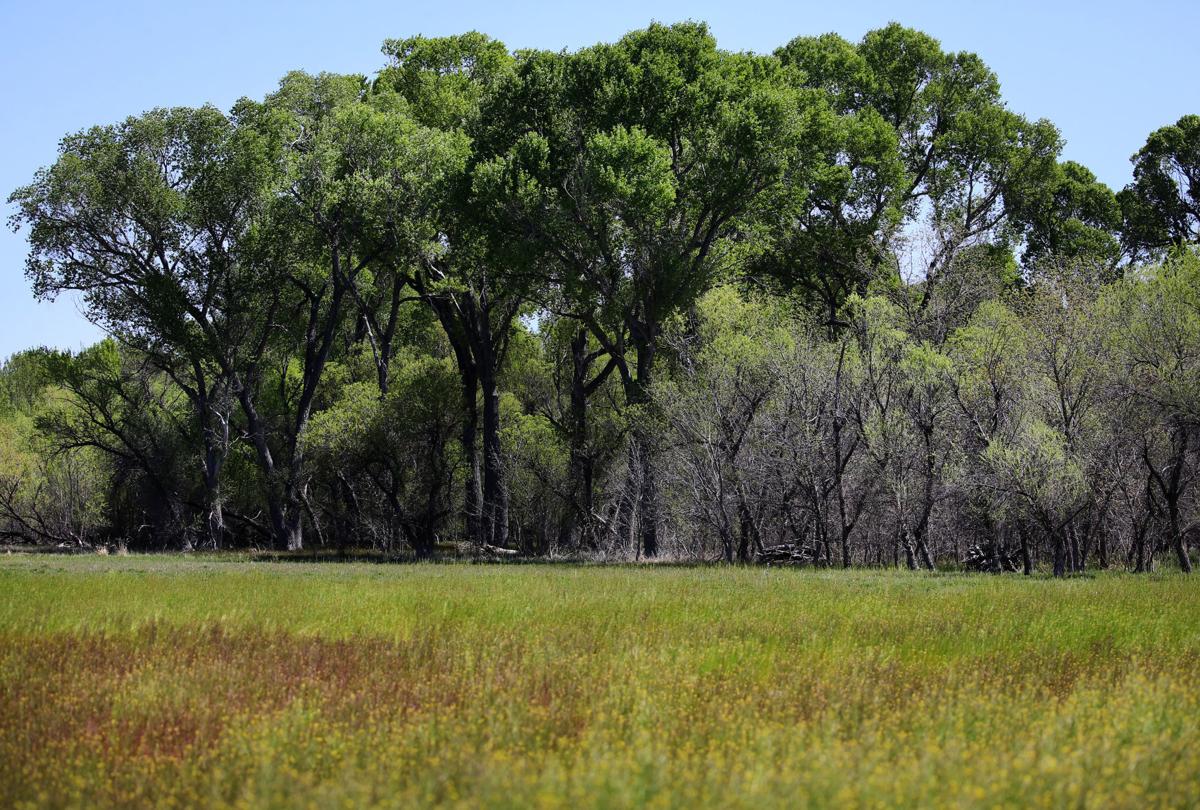