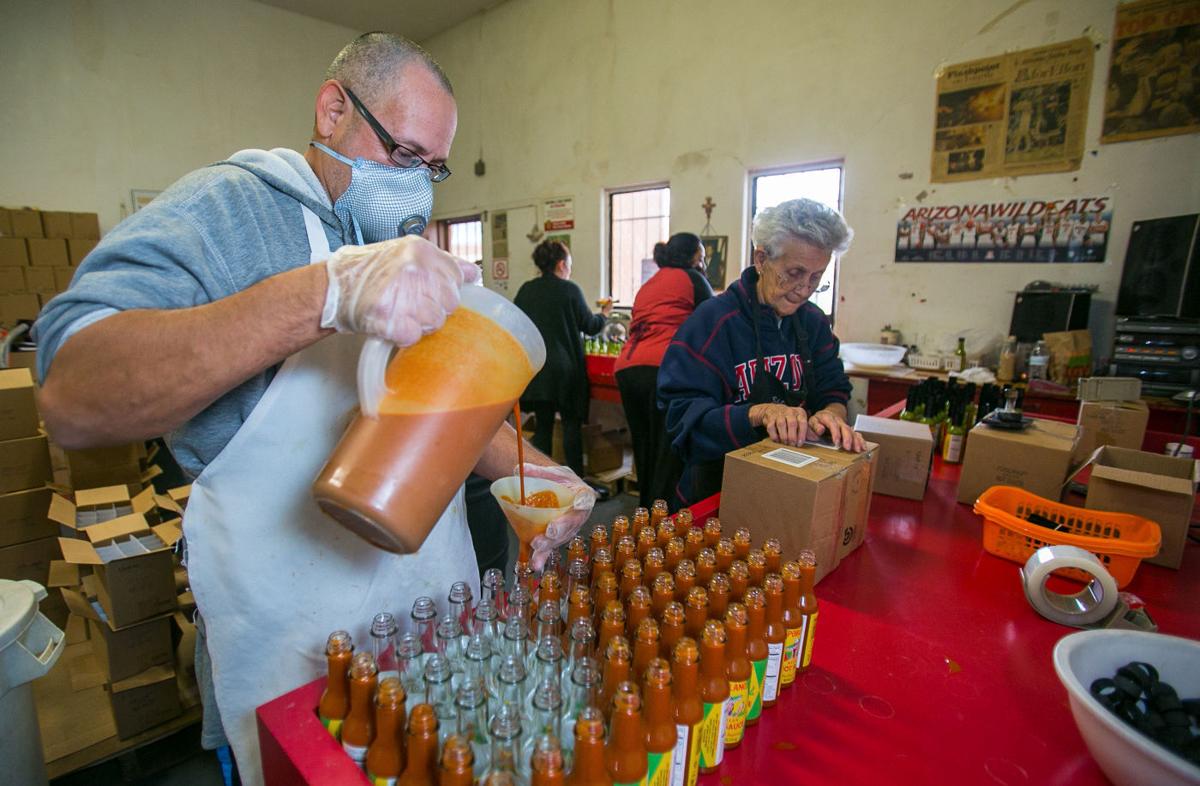 Oscar P. Segura and his mother, Gloria P. Segura, work together to bottle and package Poblano Hot Sauce at their warehouse on Tucson’s south side. The bottling has been done by hand for more than 90 years. 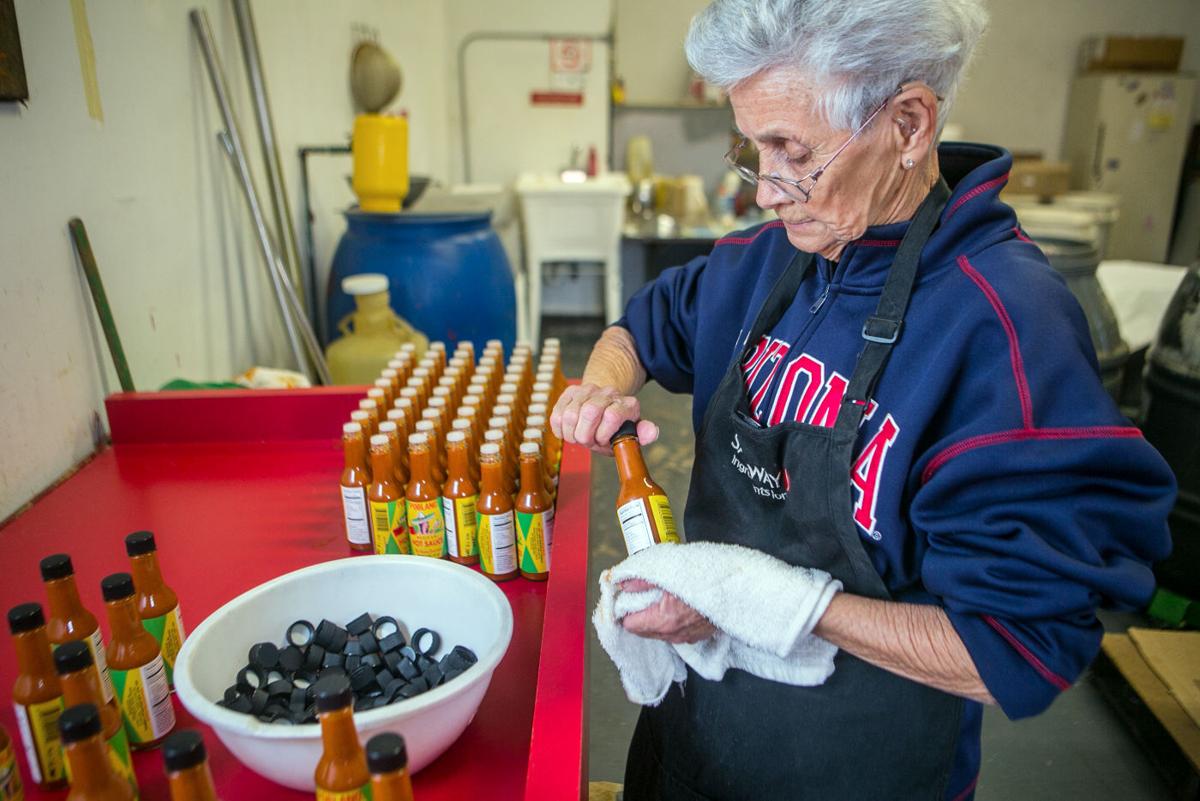 Gloria P. Segura hand caps bottle so Poblano Hot Sauce at their warehouse on the south side of Tucson, AZ. Following the passing of Oscar Segura Sr. the family is moving forward with the Poblano Hot Sauce business. in Tucson, AZ. The bottling has been done by hand for 90 years. Photo taken Wednesday, November 25, 2015. Photo by Ron Medvescek / Arizona Daily Star. 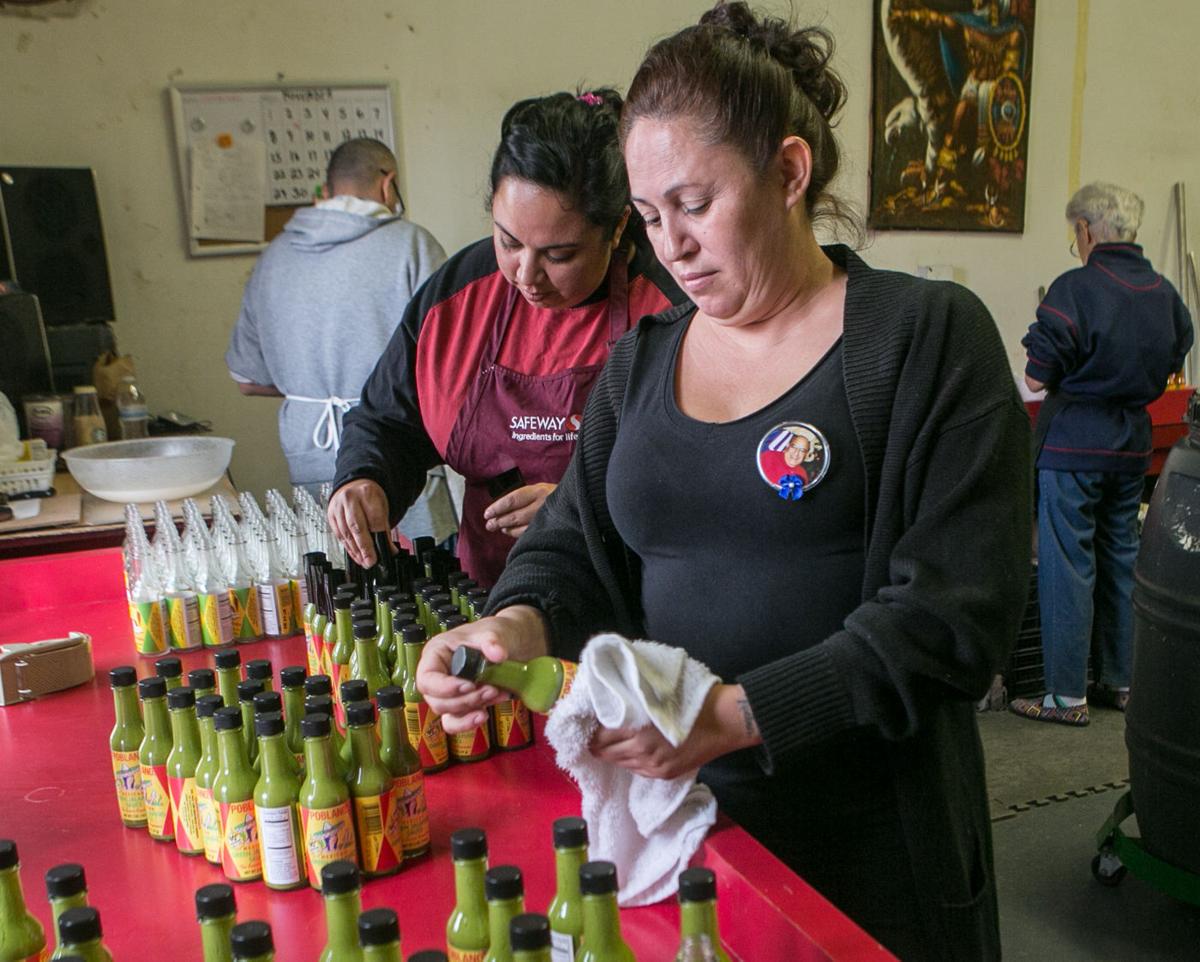 Several of Oscar R. Segura’s children and grandchildren help in the family business. Poblano Hot Sauce has been sold in Tucson since 1924. 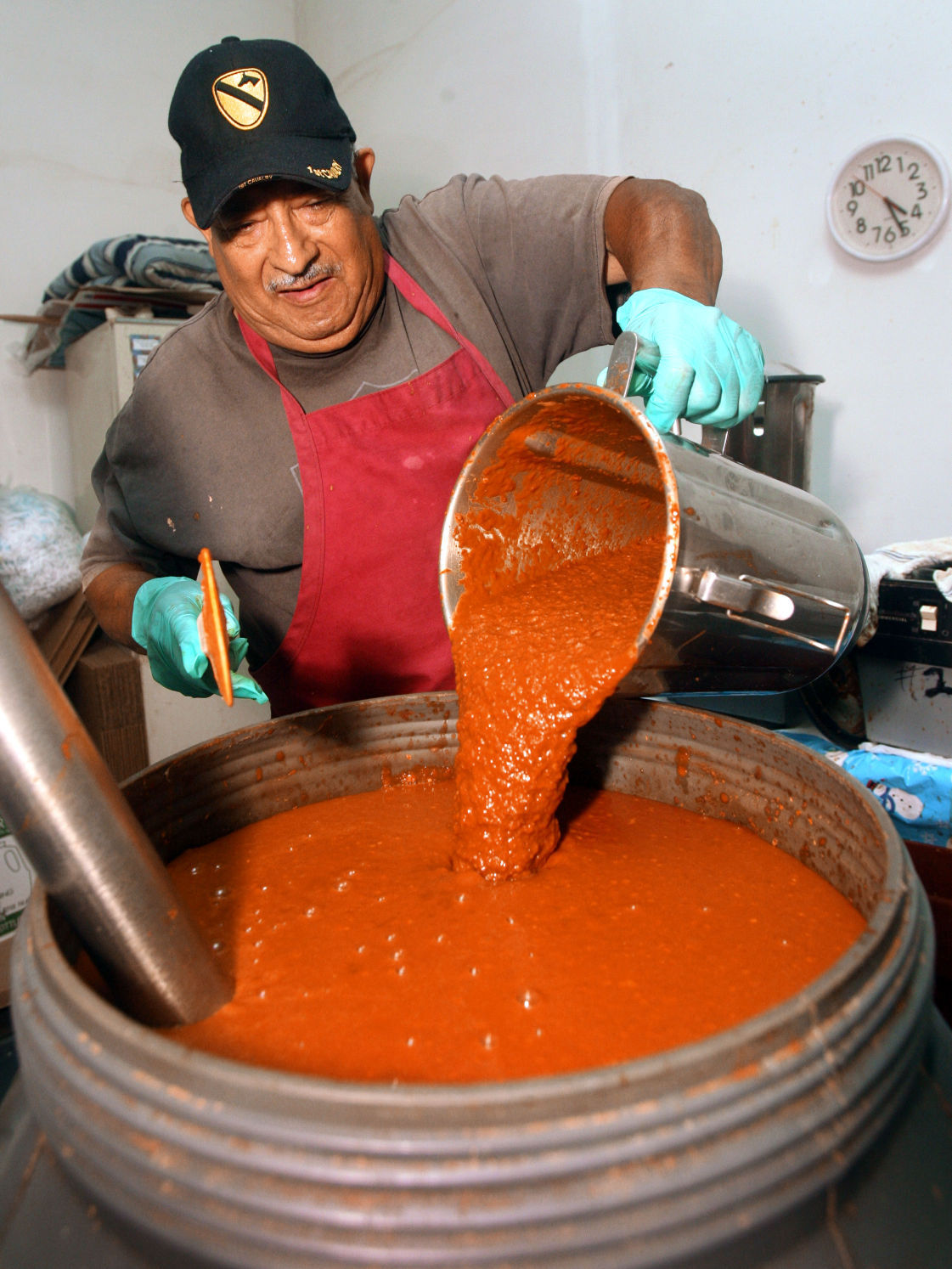 Oscar Ramon Segura was old school, at least when it came to making his hot sauce.

Every month he would grind through 300 pounds of chiles and turn them into 69,120 bottles of picante a year. He would do it all by hand — cleaning the chiles, putting them through a small industrial strength blender and pouring the salsa into bottles. He’d then label the bottles and box them, with help from his children and, in recent years, from his grandchildren.

Segura did it like his father, and now his children will continue the tradition of making, packaging and shipping the colorful bottles of the four flavors of Poblano Hot Sauce.

“He just wanted to keep it living, just like we want to keep it alive,” said Segura’s daughter, Tammy Orantez.

Her father passed away Nov. 17, at the age of 81, after a lifetime of producing Poblano Hot Sauce, the business he inherited from his father, Nicolas C. Segura, who established the company in 1924.

Now the third and fourth generations of the Segura family will keep Poblano Hot Sauce flowing.

Her grandfather joined her great-grandfather to run the business full time in the mid-1960s after serving in the U.S. Army. Oscar Segura, a Tucson native and 1953 graduate of Tucson High School, was a veteran of the Korean War.

Segura didn’t change much of what his father had begun, with one major exception: he toned down the heat. “People were complaining it was too hot,” he told Arizona Daily Star columnist Bonnie Henry in 2001.

But for years, Segura did not know the recipe his father had created. Only until his father was close to death, in 1985, did Nicolas pass on the recipe to his son.

Likewise, Oscar did not reveal the secret to anyone until very recently, when he passed it on to his son, Javier Segura.

“Not even my wife, Celina, knows,” said Javier, on the day before Thanksgiving at the small shop near East 44th Street and South Palo Verde Road where his family, including his mother, Gloria Peralta Segura, had gathered to label and package the newest batch of bottles.

Orantes said the only hint her father gave her about making the sauce was, “I put in a little of this and little of that.”

His salsa recipe was not the only culinary secret he kept, said his family. He made his own pork-beef chorizo without disclosing his choice of spices.

The next generation may make its own changes, but for right now, the four sauces, three reds and one green, will be produced the same way, said Javier.

“My father would want us to continue,” Javier added.

Poblano can be found in local food stores — Food City, Safeway, Fry’s — as well as some local restaurants — Jerry Bobs and Frank’s at East Pima and North Alvernon. The company also ships bottles and gallon containers out of state.

And its fans take the small bottles with the green, red and yellow label around the world.

When Javier served in Desert Storm, his father shipped plastic bottles of Poblano to him, and again when Javier was deployed to Iraq with his Army National Guard unit in 2006 and 2010.

The sauce was born in downtown restaurants La Loncheria and El Banquete, which Nicolas Segura and his wife Angelita, both Mexican immigrants, owned. The family lore says that by the early 1940s, Don Nicolas, as he was known, sold his Poblano sauce in recycled beer bottles. His primary customers were Chinese merchants whose many stores dotted the downtown barrios.

The company today has a local and national distributor, and is sold online.

Oscar Segura worked less and less as his health deteriorated. Breathing and handling chiles can be hard on the lungs and skin. But Segura could not stay away; he was at the shop four days before he died, said his son, Oscar Segura Jr., who works full-time at Poblano.

When he wasn’t grinding chiles and making his confidential concoction, Oscar Sr. and his wife loved to attend University of Arizona football games as season ticket holders. They also attended many events at Tucson Magnet High School, where most of their 16 grandchildren went to school.

The family will miss his humor. Oscar made up nicknames for everyone in the family. And they will miss his signature sign off when he left a message on their phones: “Toot-a-loo.”

Ernesto “Neto” Portillo Jr. is editor of La Estrella de Tucsón. Contact him at netopjr@netopjr or at 573-4187. On Twitter: @netopjr

The Otero family began its roots in Tubac, the first Spanish presidio in the Pimería Alta.

After this year's Great Tucson Beer Festival, organizer Mitzi Tharin will step down.

On this Christmas weekend, Rosa Lucatero and Ruben Verduzco know they are blessed. It’s been nearly a year since the husband and wife opened t…

Neto's Tucson: First it was a job, then a lifetime career

Pat Corella winds up a 50-year career with the public library.

Neto's Tucson: Inside the ballroom danced a great generation

In El Casino Ballroom I saw the foundation that post-World War II Tucson was built on.

Neto's Tucson: Artist's Day of the Dead altar is gift to city

Jose Duran's altar at Mercado San Agustin will be up all week.

Explore the history and culture of downtown Tucson with reporter Neto Portillo.

Go behind the scenes at Boca Tacos and learn their salsa secrets.

Neto's Tucson: Remembering a dad and his famous friend

Felicia Frontain recalls the day her father introduced her and her sister to Cantinflas.

Oscar P. Segura and his mother, Gloria P. Segura, work together to bottle and package Poblano Hot Sauce at their warehouse on Tucson’s south side. The bottling has been done by hand for more than 90 years.

Gloria P. Segura hand caps bottle so Poblano Hot Sauce at their warehouse on the south side of Tucson, AZ. Following the passing of Oscar Segura Sr. the family is moving forward with the Poblano Hot Sauce business. in Tucson, AZ. The bottling has been done by hand for 90 years. Photo taken Wednesday, November 25, 2015. Photo by Ron Medvescek / Arizona Daily Star.

Several of Oscar R. Segura’s children and grandchildren help in the family business. Poblano Hot Sauce has been sold in Tucson since 1924.