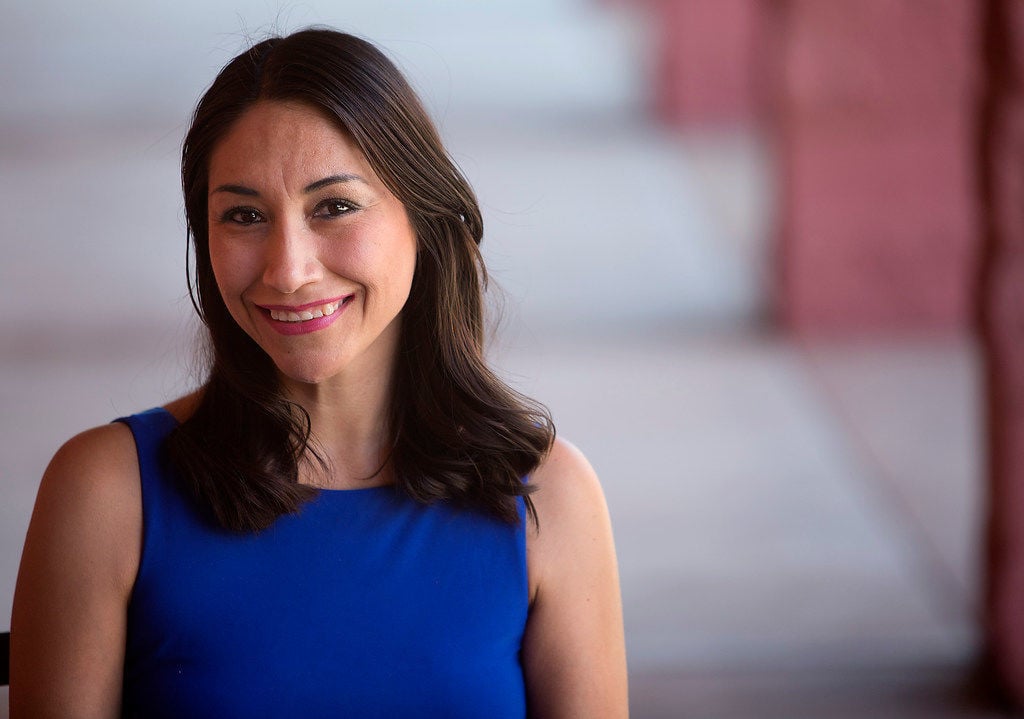 Alba Jaramillo, a lawyer who defends the rights of migrants and women, calls the one-woman play a “call for dignity.” 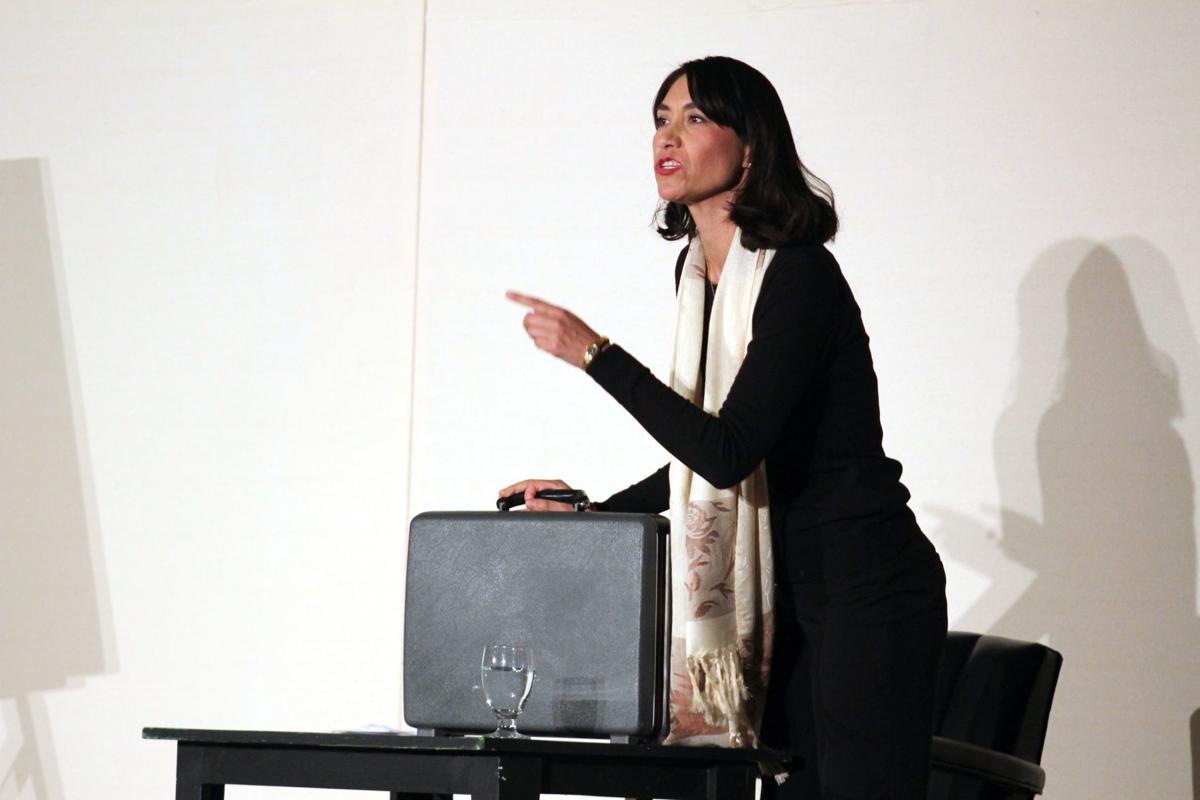 In the one-woman play, “Digna,” Alba Jaramillo enacts the role of Digna Ochoa, a Mexican human-rights lawyer, who was murdered in 2001 for her activism.

When Tucsonan Alba Jaramillo goes on stage to play her role in “Digna,” she doesn’t have to stretch far to be in character.

Jaramillo enacts the role of Digna Ochoa, a Mexican human-rights lawyer. Jaramillo, who was born in Mexico, is a lawyer who defends the rights of migrants and women in Tucson.

But that’s where the parallel ends between the two women.

Ochoa is dead. She was killed in 2001 by “unknown” assassins who broke into her Mexico City office. Ochoa was a high-profile activist who had gone into exile in the U.S. but returned to Mexico under threats of violence. Her slaying has gone unsolved but is widely considered a political murder. The Mexican government says she committed suicide.

Ochoa, who was 37 when she was killed, lives through the stage work of 38-year-old Jaramillo, an actress in addition to her advocacy work at the Southern Arizona YWCA.

Jaramillo has staged “Digna” 19 times, in both Spanish and English, in Tucson and Mexico since her maiden performance in February 2017.

She will reprise the role of Digna Ochoa, in Spanish, in two free performances on Oct. 23 and Oct. 24 at the University of Arizona. And on Nov. 1, she’ll perform the play in Mexico City.

The one-woman play is directed by longtime Tucson theater director Barclay Goldsmith, written by playwright Pat Coughlan and produced by the Teatro Dignidad, the theater company founded by Jaramillo. Two other Tucsonans involved with “Digna” are actor/director Roberto Guajardo and director Eva Tessler Zorrillo, who also translated “Digna” into Spanish.

“It’s a call for dignity,” said Jaramillo of the play. We talked Thursday in the YWCA patio on North Bonita Avenue on the west side. “Digna” is Spanish for “worthy.”

In the play, Ochoa, who was tortured several times before her murder, returns from the dead to lecture about resistance. She talks about her life and work, and the continuing violations of human rights in Mexico and the persistent killing of activists.

In the play she lectures the 43 students of Ayotzinapa, in the southern state of Guerrero, who “disappeared” on Sept. 26, 2014. Despite calls from within Mexico and by international human rights groups, there has not been a thorough and independent investigation into the students’ murders.

Mexican political- and drug-related violence does not occur in a vacuum, Jaramillo said. The violence is directly and indirectly connected to the United States, she said.

People in the U.S. demand and consume drugs originating in Mexico or passed through from other Latin American countries. Illegal weapons from the U.S. flow south into the hands of warring groups. Additionally, the United States pays Mexico to arm its police and military and to use these forces to fight drug cartels and stem the flow of Central American migrants through Mexico.

As a consequence, “human-rights violations in Mexico have increased, paid by U.S. taxpayers,” Jaramillo said. “We’re contributing to the violence.”

This is one of the reasons that Jaramillo works hard to keep Digna Ochoa alive. “Digna” maintains the focus on human-rights abuses in Mexico and on U.S. complicity.

Jaramillo is a witness to human-rights violations north of the border.

She was born in Agua Prieta, Sonora, across the border from Douglas. As a child her family moved to Los Angeles. They were poor and surrounded by violence and injustice committed against immigrant workers, women and their families, said Jaramillo. She lived without legal papers for 20 years before gaining legal residency.

She said, “I walked around in a life of fear.”

In 1994, Jaramillo and her family moved to Tucson. Eventually she graduated from the University of Arizona and in ’09 graduated from Arizona State University’s law school, the same year she became a U.S. citizen.

For the last three years, Jaramillo has been the director of the Latina Leadership Institute and Women Out of Poverty Initiative with the Southern Arizona Women’s Center for Economic Opportunity at the YWCA. She plays a real-life role in defending women’s rights and works with women to empower themselves. Her work entails workshops on dealing with issues ranging from sexual abuse, to immigrant rights, to how to start a business.

Into this work she pours her energy and commitment. It’s a passion that carries over in the staging of “Digna.”

In the summer of 2017, Jaramillo spent several months in the eastern Mexican state of Veracruz, which has been troubled by intense violence, including the murders of journalists. Digna Ochoa was born in Veracruz to a politically active family whom Jaramillo got to know. Her visit deepened her understanding of her character’s history and the current reality.

“I returned feeling I had a mission,” she said. “It was no longer acting in a play.”

Tickets: Free. Email to ajaramillo@ywcatucson.org or call 520-404-0031. Free admission reserved tickets will be available at the will call at the door.

Growing up, Perla Vanesa Barraza knew about her legal status in this country. It was not something she had to deal with until one day at high …

She retired as executive director of Southwestern Foundation for Education and Historical Preservation.

Sonia Manzano will take part on two panels at the Tucson Festival of Books.

The Southern Arizona Home Builders Association’s Home and Garden Show aims to give you home tips, make you laugh and gussy up your yard.

But most of the heaviest rain is expected to move west of Tucson, officials say.

Comics readers, we want your opinions

Based on responses to our last comics survey, the Arizona Daily Star is considering adding comics to our daily lineup — but doing so would mea…

Is the First Amendment under attack when it comes to a free press?

Day’s work brought him international attention. He won awards and his work is in collections around the country. Aretha Franklin wore one of his creations. So did dancer Ann Miller. The pope was presented with a Day-created alb, a religious garment, woven of cream-colored silk with crosses on the sleeves.

Neto's Tucson: Lady Liberty's light will continue to pierce the darkness of xenophobia

It struck me as beautiful and remarkable that a top tourist draw for foreign visitors is this country's most visible symbol of liberty and the welcoming land of immigrants.

Neto's Tucson: The power of mariachi

The message arrived in all caps. It was clear as the desert sky after a summer rain.

Alba Jaramillo, a lawyer who defends the rights of migrants and women, calls the one-woman play a “call for dignity.”

In the one-woman play, “Digna,” Alba Jaramillo enacts the role of Digna Ochoa, a Mexican human-rights lawyer, who was murdered in 2001 for her activism.