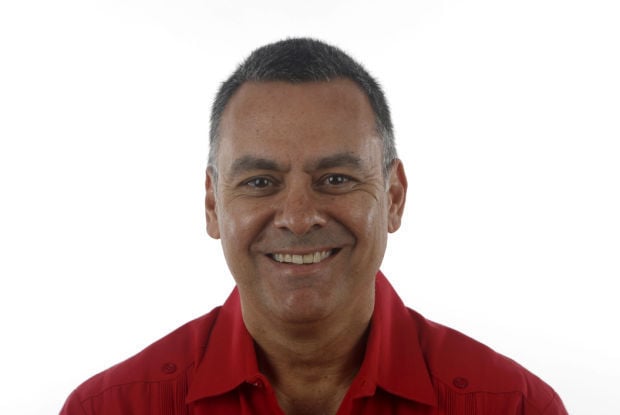 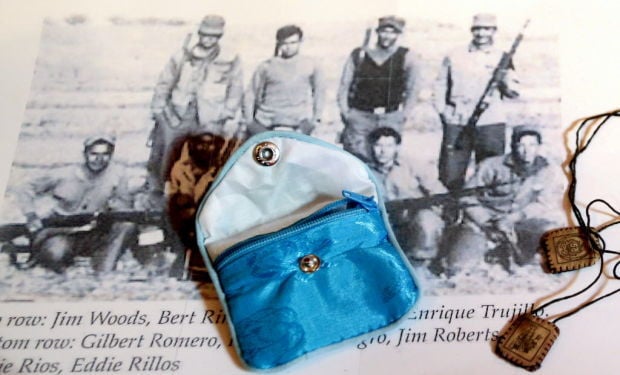 The scapulars Gilbert Romero held after being severely wounded in Korea lie on a photo of him, lower left, and his Easy Company service mates. The surviving members of E Company, a Marine Corps reserve unit, gathered for a reunion Saturday. 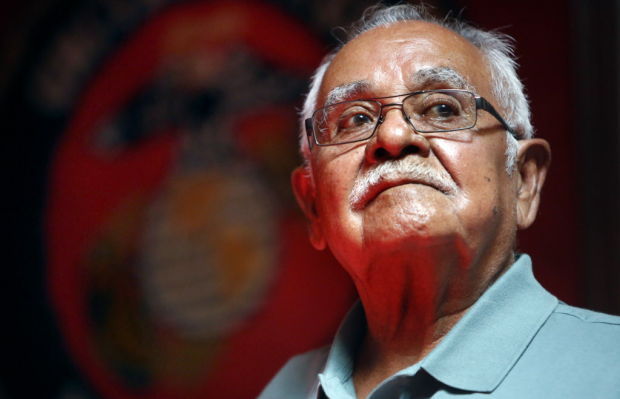 Edward Lovio joined E Company when he was 17 (a year too young) but did not see action until after he turned 18. He was wounded by shrapnel shortly after arriving in Korea. 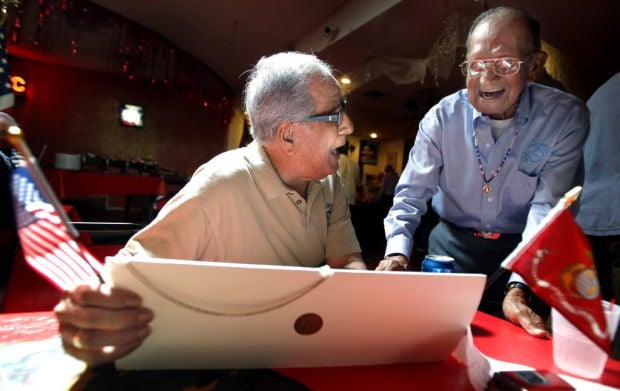 It was 1949, four years after the end of a destructive global war, and some of Tucson’s barrio boys were itching to join the military.

“Most of my friends in the neighborhood, in South Tucson, were joining and my two cousins,” said Edward Lovio.

Gilbert Romero’s older cousin, a World War II vet, encouraged him to sign up. He did, as did his primo, Henry Valdenegro; both were from Barrio Viejo.

They joined a Marine Corps reserve unit, known as Easy Company, 13th Infantry Battalion. But a year later it was anything but easy as more than 230 E-Company reservists were activated and sent to the Korean peninsula to engage in a new war.

The remaining veterans, who are in their 80s, and spouses, children and friends, gathered Saturday for a reunion at the Marine Corps League Detachment club on East 29th Street in South Tucson to catch up with each other and remember those who are no longer alive.

But being Tucsonenses and Marines, they still had a good time, drank beer and told tales. “Problem is we can’t tell lies,” said Lovio, who after the war joined the Tucson Fire Department and retired as a battalion chief. “We were all there.”

Easy Company holds a special place in Tucson’s history. The unit was largely composed of Chicanos, sons and grandsons of Mexican immigrants. They were lured to join because it was something to do and because they could earn a few extra bucks.

Lovio joined the day after he turned 17, a year shy of the minimum. His two cousins also joined the reserves. Henry Parra was 18 and Albert Armenta was 16. No one checked ages or parents’ signatures, Lovio said.

Once the Tucson Marines arrived to the front lines, they quickly grew up.

When Lovio arrived on April Fool’s Day, 1951 — after he turned 18 because his mother informed the Department of Navy of his true age — he was sent to the front as a forward observer for an artillery unit.

On patrol one day, at the back of his small column, an explosion sent Lovio flying about 15 feet. Shrapnel in his left side kept him out of action for two weeks. Medics patched him and sent Lovio back to the front.

Romero did not return to battle after he was wounded. Doctors thought he was dead.

Romero arrived in Inchon, Korea, on Sept. 15, 1950, Mexican day of independence. For the Mexican-American servicemen, it was a day of celebration. But there was nothing festive about the war.

Early the following year, after the battleground began to thaw, Romero was wounded in his leg and back he went. But in April 1951, Romero experienced a miracle.

A machine gun raked his unit on a mountain slope. A bullet struck his chin, shattering it, shredding his jaw and most of his teeth. A second round pierced his chest.

He was evacuated on a chopper but enemy fire brought it down. Soldiers took him down the mountain on a stretcher and he was put on a truck.

The truck was ambushed. Romero was hit twice in his right leg. The convoy resumed and was again attacked. Romero again was wounded, in his left leg.

At the field hospital the doctors said the unconscious Romero would not survive. But a medic recognized Romero as a fellow Tucsonan and E Company Marine.

The medic, William Fisher, who would later serve as a longtime educator in the Tucson Unified School District, put a scapular, a religious item, in Romero’s hands. When he arrived at a military hospital in Japan, Romero, who received two Purple Hearts, was still clinging to the scapular.

With less than 70 of its Marines remaining, E Company is dwindling. Semper Fi.

Neto's Tucson: The League of Mexican-American Women is looking for new members

Changing societal attitudes and the mounting costs of organizing a gala ball are hurting the group's traditional fundraising for scholarships.

A nonprofit group puts veterans in passenger seats of drift cars to simulate the rush of adrenaline from combat. The fun is designed to be therapeutic.

The scapulars Gilbert Romero held after being severely wounded in Korea lie on a photo of him, lower left, and his Easy Company service mates. The surviving members of E Company, a Marine Corps reserve unit, gathered for a reunion Saturday.

Edward Lovio joined E Company when he was 17 (a year too young) but did not see action until after he turned 18. He was wounded by shrapnel shortly after arriving in Korea.