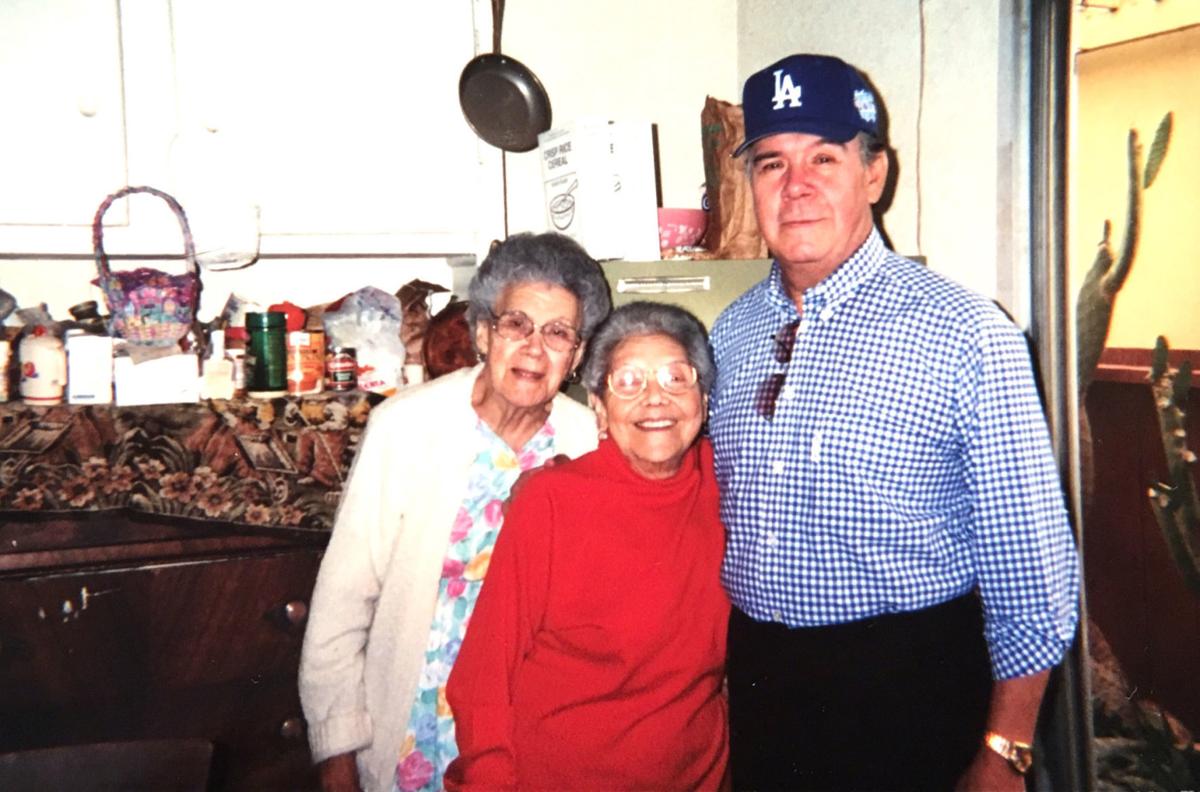 Frank H. Cruz, right, in 2001, with his mother Rutilia “Ruth” Osuna Peralta, left, and his aunt, Gaudelia Osuna. Cruz says his mother, who died in Tucson in 2009, says “the values that she taught me and my brother have been the building blocks of my life." 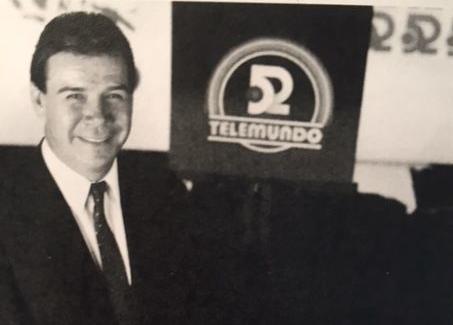 If I were to tell you about a kid who grew up in Barrio Hollywood on the city’s west side, where he ran around on the unpaved streets and helped his Mexican-born madre run her little café, and who after graduating from Tucson High School joined the U.S. Air Force, and who after his honorable discharge settled down in Los Angeles, got married, started a family, and became a college professor, a pioneering television reporter and executive, and who later co-founded a national Spanish-language television network and served on a national board overseeing public television, would you believe me?

Meet Frank H. Cruz. He did all that and more. But before you get to know about his accomplishments, he would like you to meet the person behind his success: his mamá, Rutilia “Ruth” Osuna Peralta.

“The values that she taught me and my brother have been the building blocks of my life,” said Cruz from his Los Angeles-area home in a telephone conversation Friday, on the day that Mexicans and Mexican-Americans celebrated Mother’s Day.

Cruz, 79, details his life in his memoir, “Straight Out of Barrio Hollywood,” co-authored by Rita Joiner Soza. And in the first chapter, Cruz puts his mother and family up front and center.

“My mom was just 24 years old with two boys and a low-paying job that required her to be away from home several hours a day,” Cruz writes in his book.

She was born in the state of Sinaloa less than four turbulent years after the outbreak of the 1910 Mexican Revolution. She and her sisters were sent to live in Nogales, Arizona. Later Cruz’s mother and several tías moved to Tucson in the 1930s. They settled at the corner of West St. Mary’s Road and North Columbia Avenue in Barrio Hollywood.

Cruz’s parents met while they both worked for Oliver Drachman’s Tucson Laundry. But before Cruz was born, his father, Moses Cruz, died of meningitis in 1939. His mom was left to her own wits — and entrepreneurial spirit.

She opened Colombia Café next door to the family home. When Cruz and Richard, his older brother, weren’t at school or doing their homework, they were working in the small restaurant.

“We all had to pitch in. Where she found the wherewithal to open the restaurant, to have that entrepreneurial spirit … she could have easily stayed at the laundry. She had the mental capacity and spirit to open the cafe,” he said.

It was in high school when Cruz caught the broadcasting bug. At Tucson High, in a radio class taught by Glenwood Broyles, Cruz and classmate Gloria Reynaga spent the school year producing a 30-minute radio program for Tucson’s first Spanish-language radio station, KEVT, where my father, Ernesto V. Portillo, worked. The pair reported “on anything that was of interest to each other, our classmates and our families,” Cruz writes in his book.

“It has always been clear to me that the hard circumstances of my boyhood could have resulted in a more typical story of lost hope and squandered potential,” writes Cruz.

But his mentors told him otherwise, primarily his mother, who passed away in Tucson in 2009 at the age of 95.

Cruz thinks of his mother every day but today, Mother’s Day, his thoughts of her will be more intense. Because of the work ethic that she instilled in her two sons, Cruz attributes his success to her. “Because of my mom, I learned the willingness to take risks,” he said in our conversation.

After his military discharge, Cruz earned two degrees from the University of Southern California and began teaching, first in high school and subsequently in college. He taught Mexican and Mexican-American history, which was not taught in the late 1960s, as the Mexican-American civil rights movement began to surge. He also helped create a landmark 20-part television series on the Chicano experience and contributions. This would lead Cruz into the television industry.

He went on to become one of the first Latino television reporters in Los Angeles, first with KABC-TV and later with KNBC-TV, both network-run stations. Later in his career at KNBC, he was a weekend news anchor, again one of the first Chicanos. Subsequently in 1985, Cruz co-founded Los Angeles’ second Spanish-language television station, KVEA-TV, which was spun into the national Spanish-language television network Telemundo in 1987.

And in 1994, President Bill Clinton appointed Cruz to the board of directors of the Corporation for Public Broadcasting, an unpaid position he held for 13 years, including two years as board chair. As the first person of color named to the board, Cruz pushed the network of public television and radio stations to be more inclusive and reflective of America’s changing demographics.

Along the way he also co-founded the first Latino-owned national insurance company, served on the board of trustees for his alma mater USC for 19 years, and was inducted into the Tucson High School Badger Hall of Fame, class of 1957.

While Cruz’s memoir focuses on his life’s struggles and achievements, his story is also about the rise and evolution of Mexican-Americans in the U.S. southwest and societal changes as a result. His story also reminds us of the continuing challenges that the Mexican-American and Latino populations face despite their growing numbers.

However, beneath the social and political threads that Cruz weaves, at its essence, is a story about a son and his widowed mother.

“I never had a dad,” he said. “Mother is really special to me because of the fact she was all that I had. Loving. Disciplinarian. Super, super special.”

Neto's Tucson: Our city's symbols — the 'A' and the Virgen — connect us

The two symbols are first among equals in Tucson. They compete for our attention and they complement our sense of place.

Diana Delgado did not let a professor's words deter her.

This is a story about doing what's right against the odds and the push back by the privileged status quo.

Neto's Tucson: The Mariachi Miracle of our town

In the past two editions of the ever-growing Tucson Festival of Books, TUSD’s now defunct Mexican-American Studies program has occupied a sliv…

It was 64 years ago that Tucson's barrio boys went to war.

Neto's Tucson: Our city has a few challenges. So what?

Leafing through a report on our community's goals in 1966 left me thinking about Tucson then and Tucson now.

Frank H. Cruz, right, in 2001, with his mother Rutilia “Ruth” Osuna Peralta, left, and his aunt, Gaudelia Osuna. Cruz says his mother, who died in Tucson in 2009, says “the values that she taught me and my brother have been the building blocks of my life." 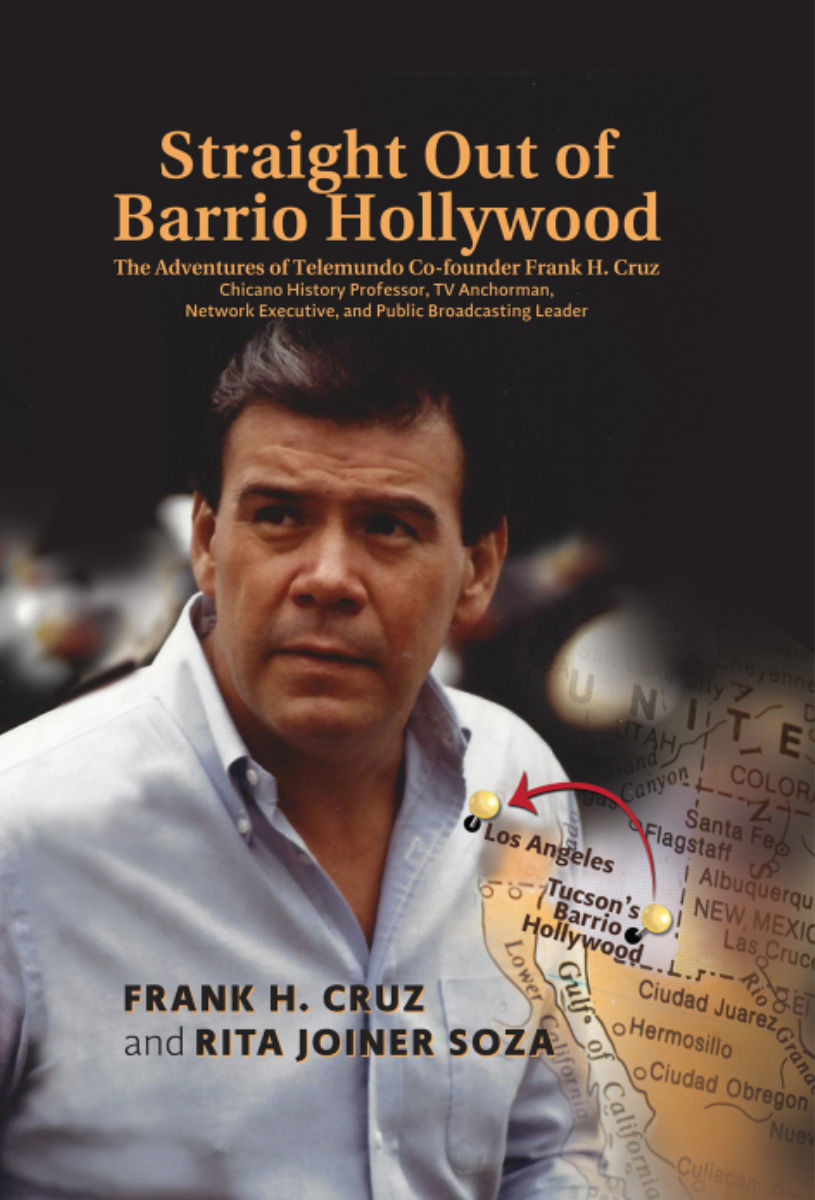