Neto's Tucson: Holocaust History Center connects us to refugee ban
Share this
1 of 3 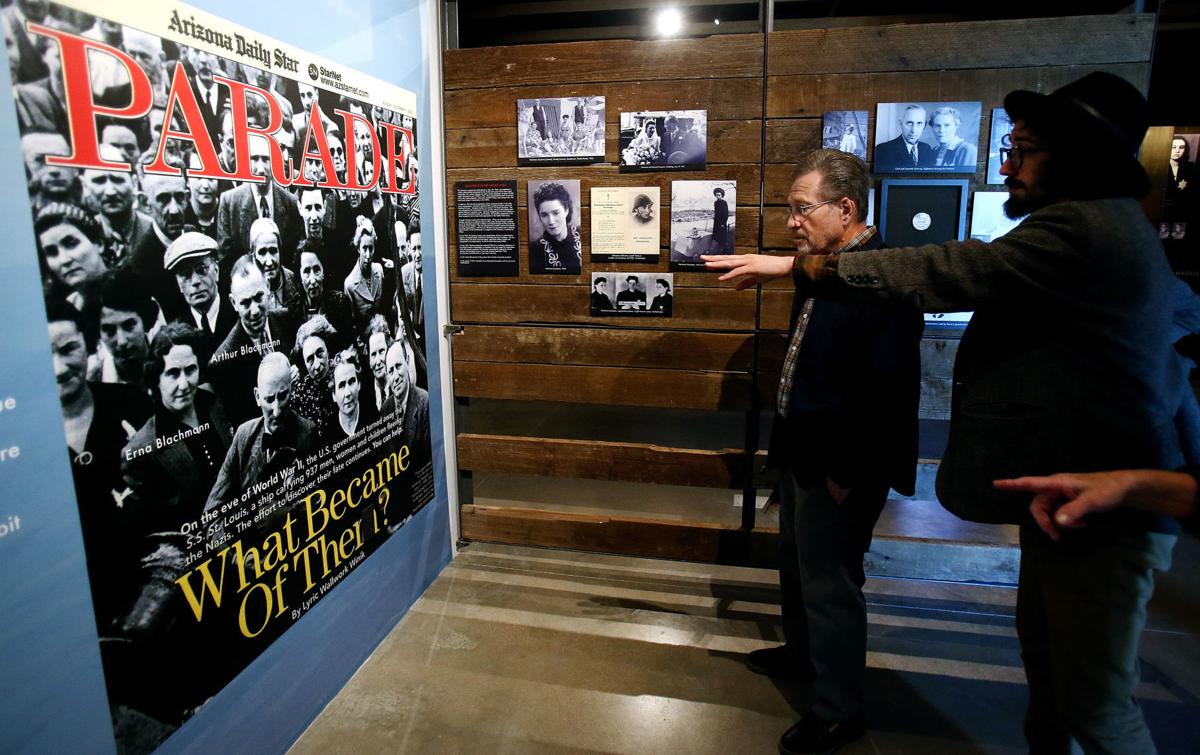 At the Holocaust History Center, Robert Yerachmiel Snyderman, right, talks to Stan Nevins about Jewish refugees denied entry to the U.S. in 1939. 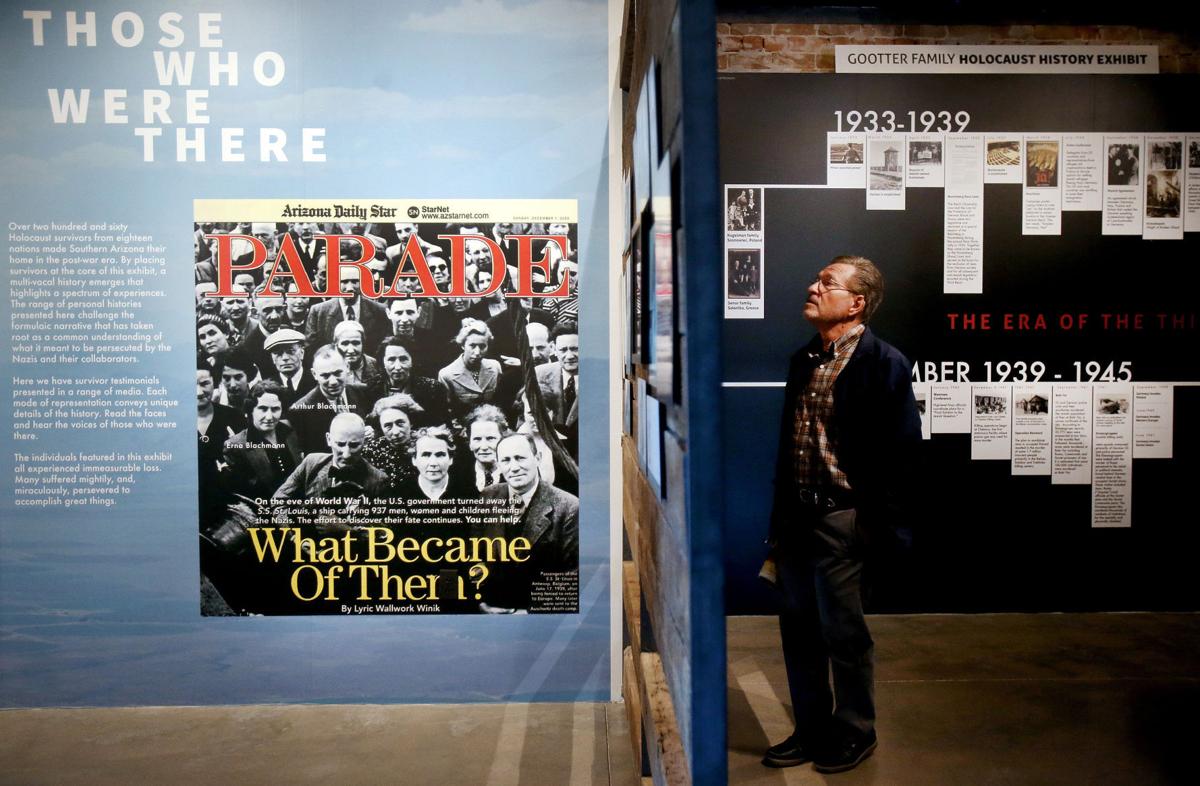 Stan Nevins reads through the exhibits at the Holocaust History Center at the Jewish History Museum, 564 S. Stone Ave., on Jan. 28, 2017, in Tucson, Ariz. At left is a reprint of a 2003 Parade magazine cover featuring a 1939 photograph of passengers aboard the S.S. St. Louis. The center opened in February 2016. Mike Christy / Arizona Daily Star 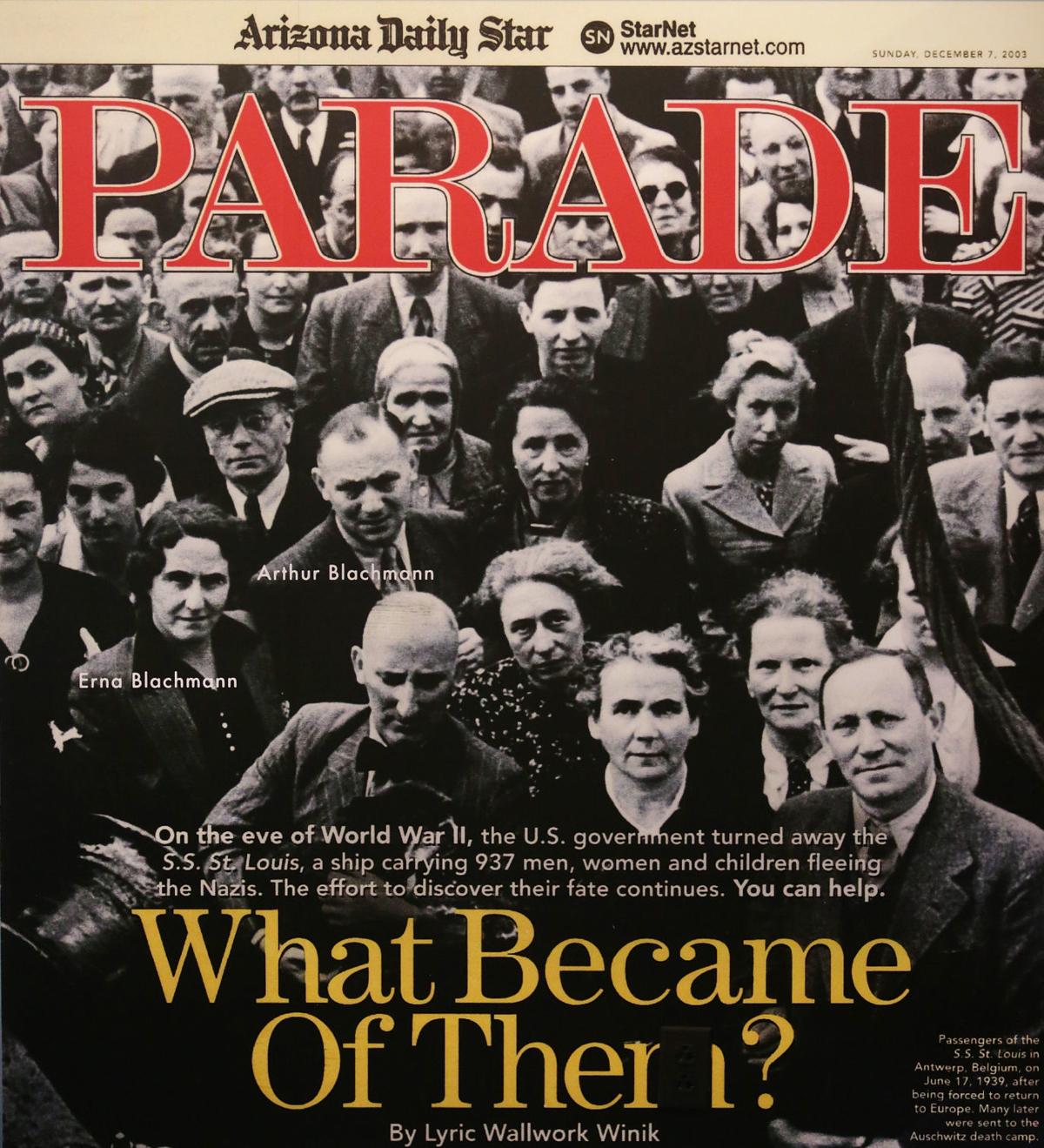 Inside the somber Holocaust History Center, on a wall, is an exhibit of a large reprint of a Parade Magazine cover. In the photo dozens of people peer up into the camera with eyes of despair, uncertainty and glimmers of hope.

Two people in the photo, taken in June 1939, are Erna and Arthur Blachmann, husband and wife, on the deck of the SS St. Louis. They, along with more than 900 other men, women and children, including the Blachmanns’ young daughter who is not in the photo, had fled Nazi Germany. They were persecuted, fearful Jews.

The ship left Germany for Cuba. They were not permitted to enter. The ship’s captain then took the refugees to the U.S., where they were denied entry. The ship moved north along the coast to Canada and found the door was also closed.

The ship eventually returned to Europe, shortly before the outbreak of World War II, and the refugees dispersed to several countries. It is estimated that several hundred of the passengers eventually died in Nazi concentration camps.

Arthur Blachmann was one of those killed. His wife and daughter, Gerda, survived and eventually fled Europe again, only this time they were allowed into the U.S. Erna and her daughter finally came to Tucson, where they lived out their lives and contributed to the community.

“This is kind of instructive of what happens when one immigrant gets in, the other one doesn’t,” said Peter Marcus in a telephone interview. The Blachmanns were his grandparents; his mother was Gerda, who died in Tucson in 1999 at the age of 76.

Friday, International Holocaust Remembrance Day, I went to the Holocaust Center on the downtown campus of the Jewish History Museum, a week after the inauguration of President Donald Trump, who had campaigned on a platform of fear-based exclusion, of turning away suffering refugees, and of demonizing groups of people.

Trump made good on his demagoguery and “America first” promises when he announced the expansion of the unfinished portion of the southern border wall, that his administration would punish U.S. cities that offer “sanctuary” to undocumented immigrants, and that he would push local law enforcement to function as immigration agents.

And Friday the president, in an executive order, barred indefinitely Muslim Syrian refugees from entering the country, refused entry to all refugees for 120 days and halted entry into the U.S. of anyone from seven predominantly Muslim countries for 90 days. The order also bans U.S. residents with green cards from returning to the United States.

When and if Syrian refugees are allowed to find refuge in the U.S., the Trump government plans to slash the number in half. To drive home his anti-Muslim point, the president exempted Christian Syrians from his blanket directive.

The order was immediately applied Saturday as travelers returning home to the U.S. were detained at U.S. airports and others were not allowed to board U.S.-bound flights.

This is what this country, land of the free and the brave, has come to. Tucson’s refugee community has suffered enough and will face additional uncertainty.

Looking at the Blachmanns’ faces, I see the faces of Syrian men, women and children who have suffered war and deprivation. I see the face of the dead Syrian baby on the Mediterranean shoreline and photos of drowned immigrants. I see and hear the increasing attacks — verbal, political and physical — on peaceful Muslims living as our neighbors.

The Blachmanns and the thousands of German Jews in the 1930s who were turned away were considered dangerous and a menace to the United States. Today, in Trump’s alternative fact-based world, so are Muslim refugees.

“The parallels to how the United States denied the entry of Jews from Europe trying to escape the Nazi regime and now the Syrians seeking refuge is eerily similar. This country’s refusal of sanctuary to those displaced Jews resulted in hundreds of deaths,” Tucson immigration attorney Mo Goldman wrote me.

“I am fortunate to be alive today, as my grandparents were able to seek refuge after miraculously surviving concentration and labor camps in Nazi Germany,” he wrote.

Bryan Davis, executive director of the Holocaust History Center, said since it opened in February 2016, many visitors have made similar connections between the U.S. treatment of Jewish refugees to today’s vilification of Muslim refugees and immigrants. More will make that connection, hopefully.

Who knows how long reason, compassion and true American ideals will hemorrhage, but already there is honest resistance to this shameful action and Trump’s blatant disregard for the Constitution.

JCC hosts signing with author of book on Holocaust survivors

How Tucson artist Rock Martinez evolved from tagger to muralist

Rock Martinez is all about colors. Big, bold, bright colors that grab the eyes and keep them.

It’s a cloudy Friday morning and there are few men milling around the parking lot at Southside Presbyterian Church. This is where day laborers…

The Tucson High foundation's board is asking alumni to give back to the 110-year-old school.

On this Christmas weekend, Rosa Lucatero and Ruben Verduzco know they are blessed. It’s been nearly a year since the husband and wife opened t…

Neto's Tucson: Getting poetry into our daily lives

If the recent presidential election showed us anything, it revealed the power of words. The language used by the candidates and their surrogat…

There weren't even enough nominations to award a Latin Grammy this year.

“I am still appreciative of the wide support I received,” says Rosa Robles Loreto.

Neto's Tucson: Missing out (again) on a Christmas food tradition

I have a confession, embarrassing for a Tucson homeboy: I don't cook my Christmas tamales at home.

Most say directive will cause more harm than protecting U.S.

Signed letter highlights the city's friendly relationship with Mexico, its fight against SB 1070 and mass deportations.

From his daily hangout at 12th and Irvington, he became "a south-side legend."

The Feb. 18 event will be held at Tucson High, a larger space than originally planned, due to "overwhelming response," organizers say.

Raniesia Fletcher grew up as the daughter of crack-addicted parents surrounded by violence. She's overcome her past to help Tucson refugees.

Richard Lopez turned 94 last week. His room was festooned with balloons and birthday cards and he was resting in bed when I visited him Thursd…

Neto's Tucson: What sanctuary is — and is not

This is why I support the effort to make Tucson a sanctuary city.

Neto's Tucson: Becoming a sanctuary city is the right thing to do

Sanctuary in Tucson would tell other Arizona communities and the country that all lives matter.

At the Holocaust History Center, Robert Yerachmiel Snyderman, right, talks to Stan Nevins about Jewish refugees denied entry to the U.S. in 1939.

Stan Nevins reads through the exhibits at the Holocaust History Center at the Jewish History Museum, 564 S. Stone Ave., on Jan. 28, 2017, in Tucson, Ariz. At left is a reprint of a 2003 Parade magazine cover featuring a 1939 photograph of passengers aboard the S.S. St. Louis. The center opened in February 2016. Mike Christy / Arizona Daily Star